Skip to main content
You are the owner of this article.
Edit Article Add New Article
You have permission to edit this article.
Edit
Home
News
Sports
Profiles
Opinion
Classifieds
Obituaries
Contact Us
Subscribe
e-Edition
Photos
State
Covid-19
1 of 8 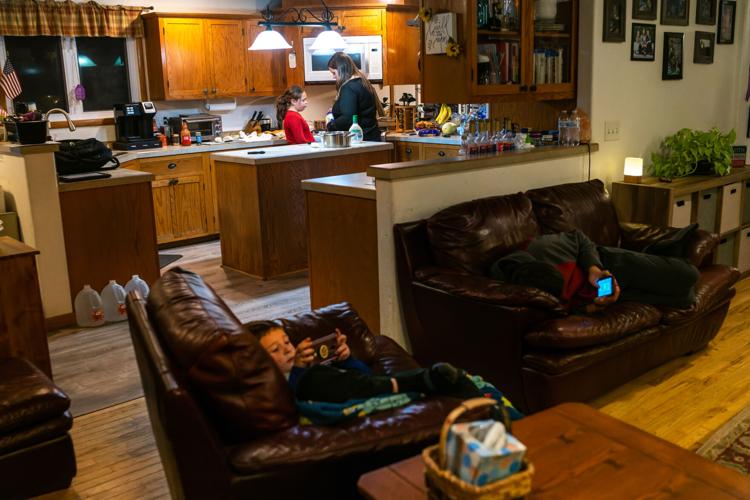 Lincoln Rogers and Andrew Rogers play games on their phone as Abby Rogers and her mom Kristin Rogers cook dinner on Tuesday, Nov. 15, 2022 at the Rogers’ home. 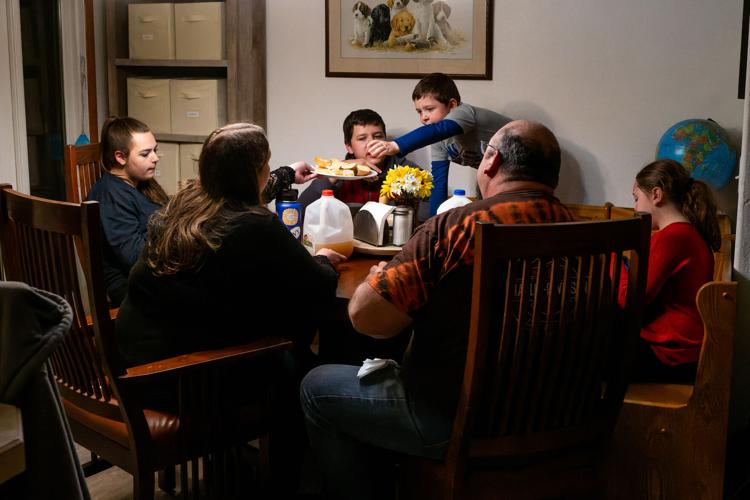 Lincoln Rogers reaches for a piece of garlic bread during dinner on Tuesday, Nov. 15, 2022 at the Rogers’ home. 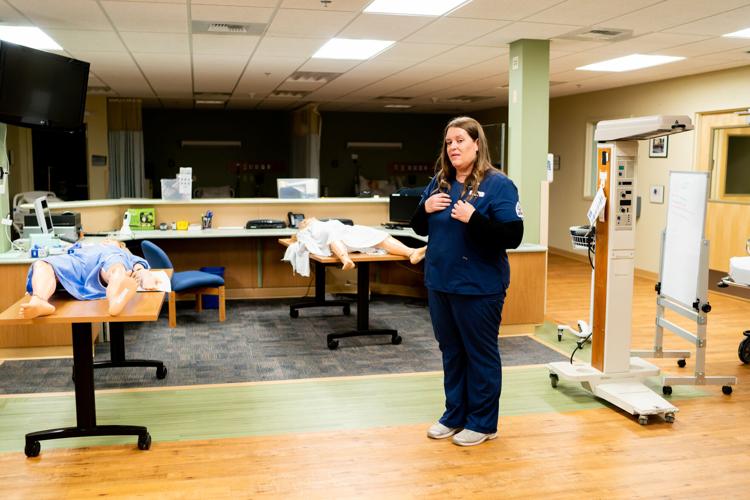 In addition to her familial duties Kristin Rogers is in nursing school. She decided on the career after her husband, Steve Rogers, became very sick with COVID-19. She said the nurses in the hospital were an inspiration. 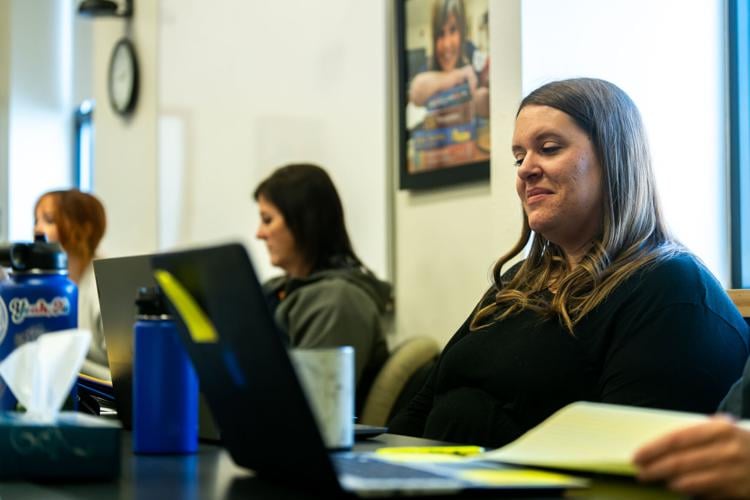 Kristin Rogers goes over her notes before class starts on Friday, Nov. 18, 2022 at Sheridan College. 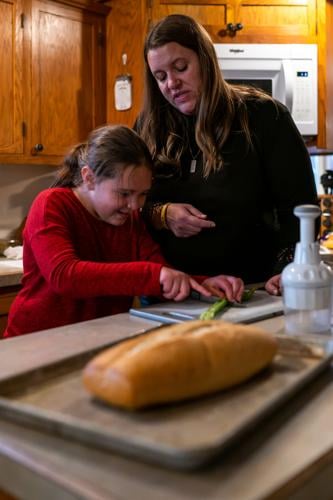 Kristin Rogers, right, teaches her daughter Abby Rogers to cut up celery as they cook dinner together on Tuesday, Nov. 15, 2022 at the Rogers’ home. The pair spent most of the evening cooking buffalo chicken pasta. 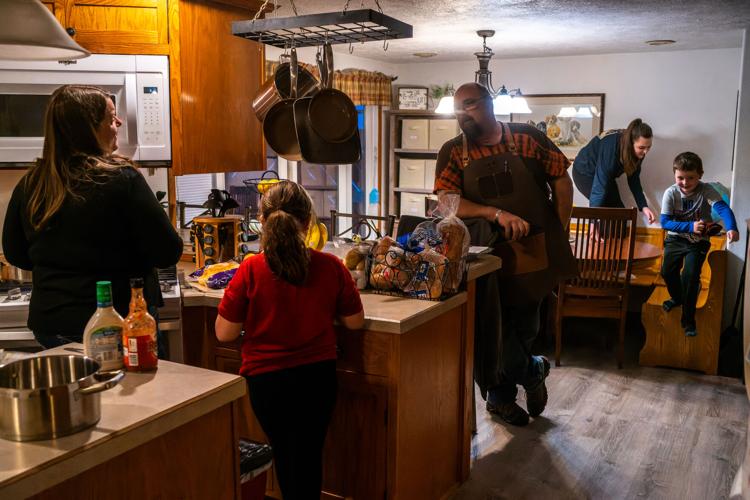 The Rogers family gathers in the kitchen to play and talk while dinner cooks on Tuesday, Nov. 15, 2022 at the Rogers’ home. For most of the cooking process the family went their separate ways, but occasionally they gathered to check-in and talk. 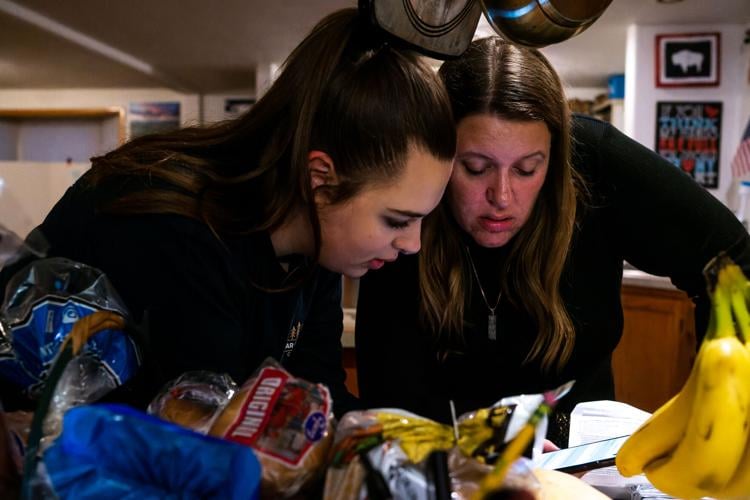 Kristin Rogers, right, helps her daughter Liberty Rogers fill out a W-2 form on Tuesday, Nov. 15, 2022 at the Rogers’ home. Liberty just got a job at McDonalds. 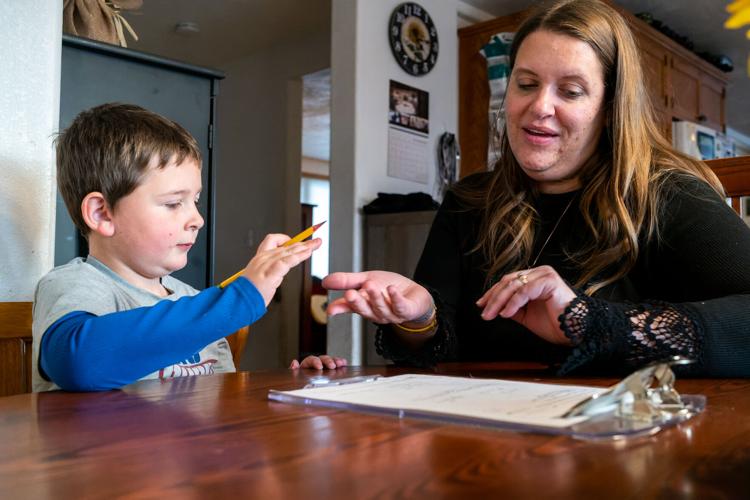 Lincoln Rogers gives his mom, Kristin Rogers, a low-five after getting a math problem right on his homework on Tuesday, Nov. 15, 2022 at the Rogers’ home. In addition to being a mom of four Rogers is also studying to become a nurse.

When Steve Rogers was hospitalized with COVID-19 last year, his wife, Kristin, was by his side in Billings for most of the 63 days.

Steve has since mostly recovered but still struggles to breathe, so he's unable to work. Kristin, previously a stay-at-home mom who homeschooled their four kids and helped Steve run their business that has since been liquidated, knew she would have to get a job. At the

Billings Clinic, for more than two months, she watched the nurses care for her husband's medical needs and offer her emotional support.

“I call them angels on earth, because I really feel like that's what they were,” Kristin said.

With that experience, Kristin said, she knew she didn't want to use her accounting degree when she went into the workforce.

She wanted to be a nurse.

“Reflecting on our experience and just how blessed we were by his nurses, I was like, 'I think I want to do that,'" Kristin said. "So I just kind of prayed about it and I really feel called to do this. I want to be the support that we found through the nurses (in Billings). I want to be that for somebody else.”

So, Kristin called Sheridan College and learned that most of the credits from her first degree in accounting would transfer toward a nursing degree. She completed a few prerequisites and started as a student in the school's nursing program this year.

Everyone in the Rogers family is living differently since their life-changing experience.

Talking about his time in the hospital, Steve calls it “our bout with COVID.”

Steve is continuing to recover from COVID-19 and doing leather work.

This school year is the second that Lincoln, Abby, Andrew and Liberty are enrolled in public school.

And Kristin, a certified nursing assistant and college student, is no longer a homeschooling mom, but a mom who sends her kids to school each morning.

On a typical day, Kristin and Steve wake up at 5:45 a.m. to get the kids ready and drive them to school. From there, Kristin heads to Sheridan to take classes in the morning and study afterward in the quiet school environment.

She usually gets home before the kids get off the bus, at which point she helps them with homework and makes dinner.

For Andrew, 14, the biggest change has been having so many new classmates and friends. Previously, most of his friends came from the local homeschooling group.

Liberty, 16, as the oldest sibling, said that adjusting to talking with a teacher who's not her mom and worrying about deadlines and tests has been the biggest challenge. She's on the cheerleading team and has a job at Subway.

Abby, 9, and the youngest, Lincoln, 7, both like their teachers this year and those they had last year. Abby likes to read and write, and Lincoln likes math, like his mom, whom the family affectionately calls “a nerd.”

“You said you wanted to read your textbooks,” Abby told Kristin.

But textbooks can't teach every aspect of how to be a good nurse. For Kristin, it's about compassion and willingness to make a tough situation better.

“I was just really floored. We still keep in touch with some of (the nurses in Billings) because they were really instrumental in getting me through it,” she said. “I had the four kids. I had to bring them up to Billings with me every time I went up there. It was just a lot of work, and their encouragement and keeping me in the loop was something that I want to do.”

Next summer, Kristin said, she hopes to take her National Council Licensure Examination to become a licensed practical nurse and work throughout the summer. From there, eventually she hopes to become a registered nurse.

“A setback is usually a setup for something greater,” Kristin said. “You don't know what it is at the time. This is the toughest thing I've ever had to go through. I mean, they gave (Steve) a 50-50 chance. And so it was like, 'Oh my gosh, I'm gonna be a widow with four kids at 41. What am I going to do?' But, you know, it's turned into something really great. I love being a CNA. I've never loved a job like I love being with my patients.”

Spending time talking with patients or giving them a warm blanket is something that can change their day, Kristin said.

Steve said he wasn't surprised by her career choice.

“She pretty much decided in the hospital that that's what she was going to do,” he said. “I supported it all along.”

Since Steve woke up with a cough and shortness of breath on March 27, 2021, the Rogers family has been on a different path now, Kristin said. And that's OK.

"It was really scary to think I'm going to start a new career, but there are other people in my class that are nontraditional too,” she said. “It was funny, because when I was 20 years old in college, I was like, 'Oh my gosh, what are these people doing coming back to school?' and now I get it. I feel like it's never too late to chase your dreams.”

Ethan Weston joined the Bulletin as a photojournalist in April 2022. Reach out with ideas or comments at ethan@buffalobulletin.com.