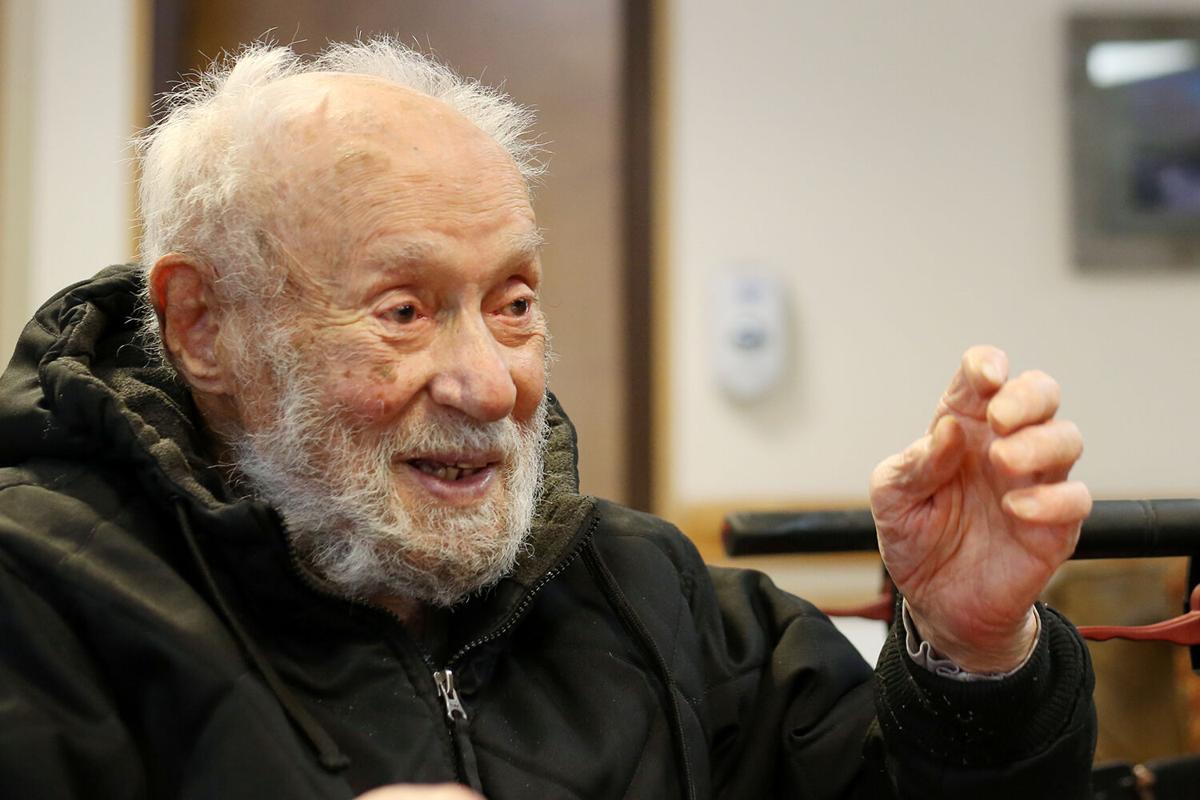 Evelino Cruz reflects on a century of life and all the changes that have come with it while celebrating his 100th birthday with a bowl of warm chicken noodle soup on Monday. Cruz is a World War II navy veteran living in the Veterans’ Home of Wyoming. 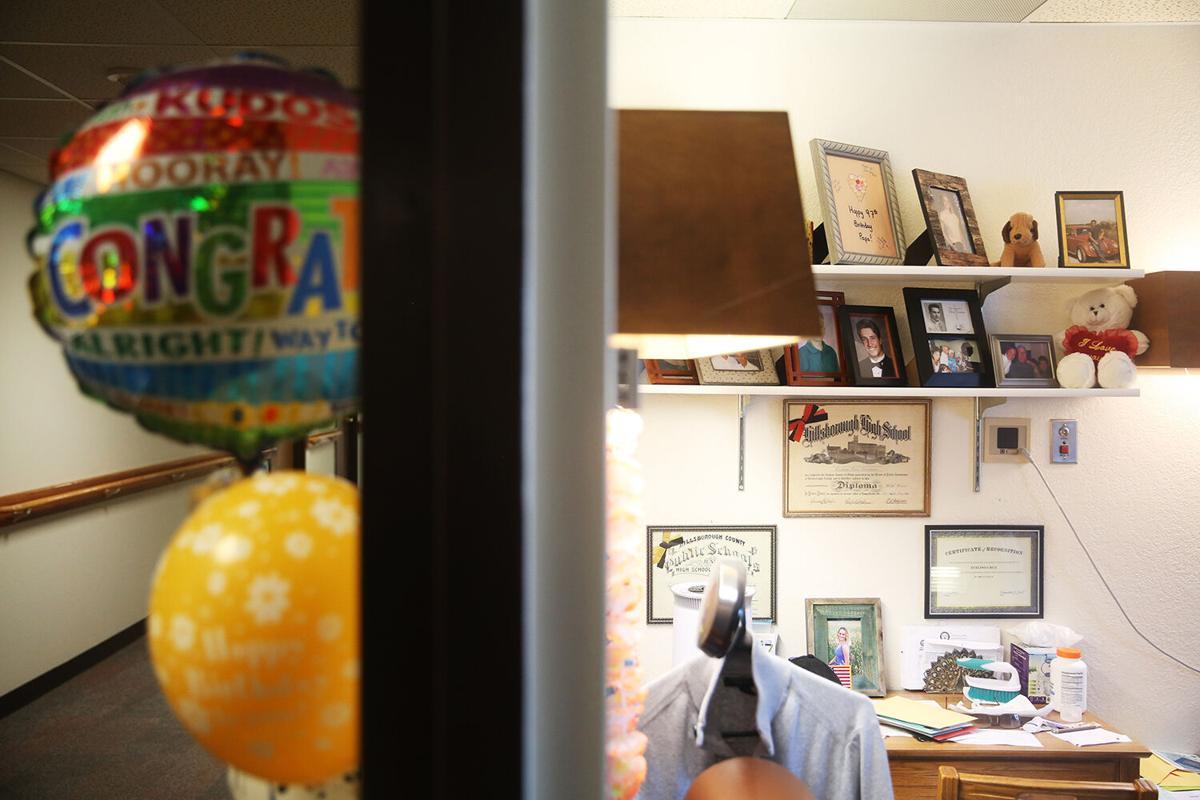 Cruz’s doorway was decorated with cards, posters and balloons in celebration of his 100th birthday. Inside, his room is decorated with photos from past and present, high school diplomas and a framed card celebrating his 97th birthday from a few years ago. A stack of cards and gifts, including from Governor Mark Gordon, was waiting to be opened along with a celebratory 100th birthday hat. 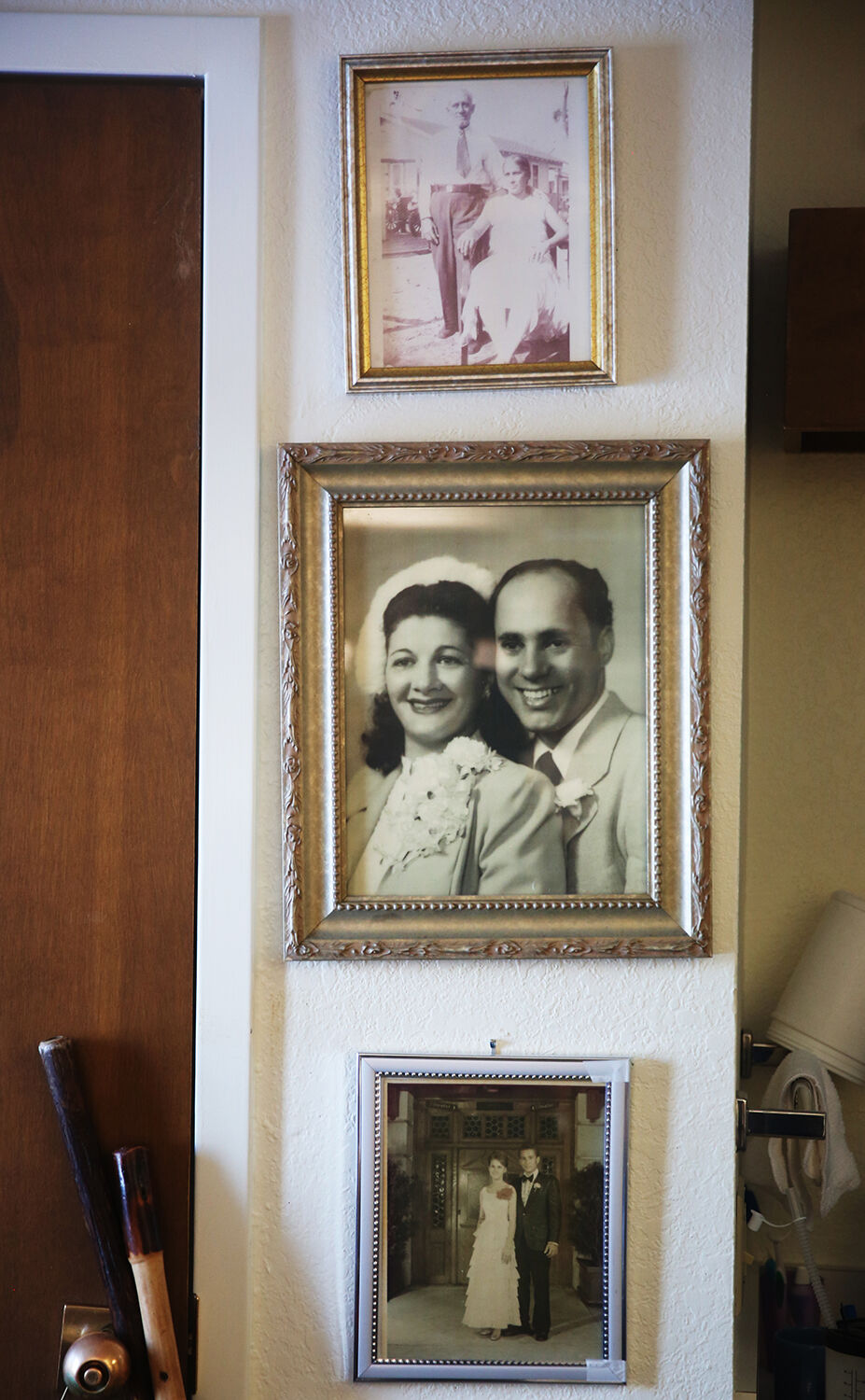 Family photographs decorate the walls of Evelino Cruz’s room at the veterans home. The top photo, which features his mom and dad before Evelino was born, is over 100 years old. The middle photo is Evelino and his wife who were married 52 years when she died, and the bottom is a photograph of one of Evelino’s sons. 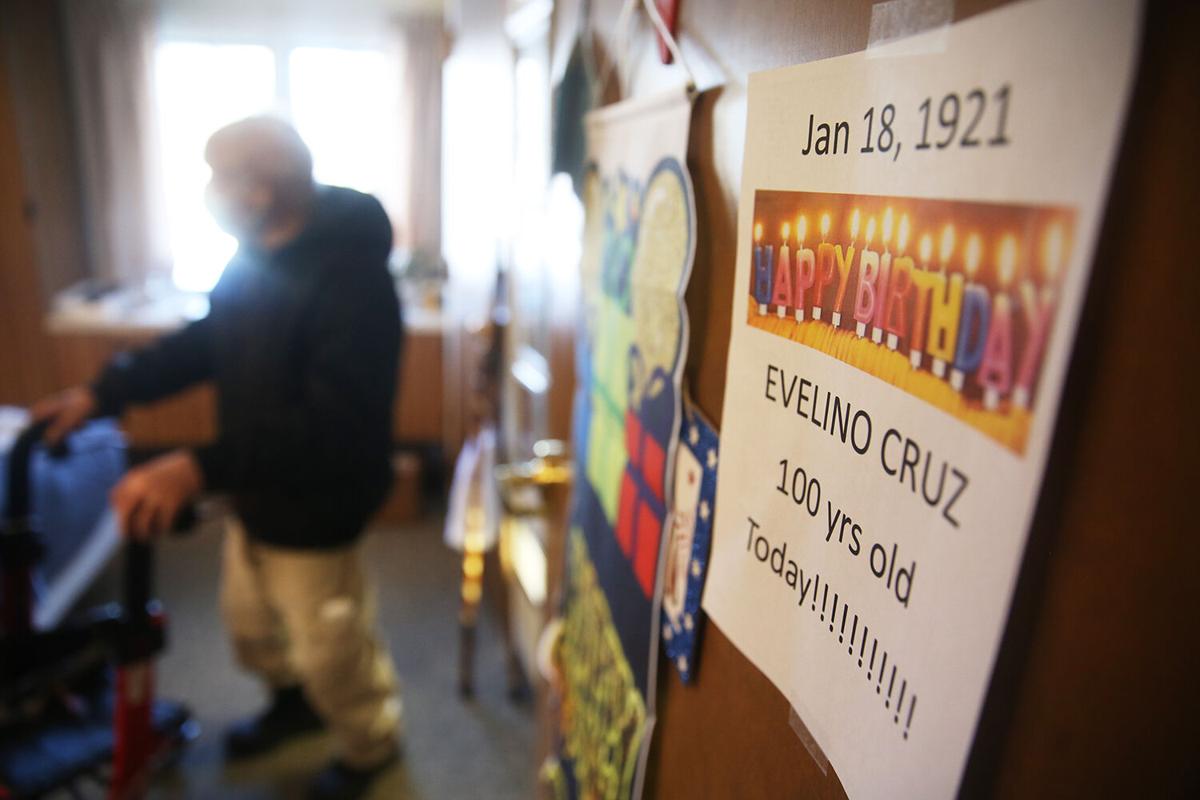 To celebrate birthdays, the nursing home makes a printed poster for the resident’s door saying when they were born and how old they are this year. This poster was just one of several decorations for Evelino’s door this year.

For his 100th birthday, Evelino Cruz was rewarded with a trip to the doctor and a visit from the governor.

“I’ve just come back from seeing the doctor. He checked me; he said there’s nothing wrong with me except old age,” Cruz said.

A Navy veteran, Cruz joined at the age of 21, spurred to action after the attack on Pearl Harbor in December 1941.

He joined in Key West, Florida, as a Carpenter’s Mate 3rd Class, based off of a recommendation from the building inspector in Tampa, Florida, whom Cruz had worked with before enlisting.

“I joined in Key West. I was working at a naval base,” he said. “They put me on a train. They were going to take me to boot camp, but when I got to Miami, they pulled me off of the train.”

In Miami, Cruz worked on fixing up the windows on an old hotel the Navy was using as barracks. When he had finished fixing the windows, he was put back on the train to Jacksonville headed for boot camp, but was pulled off again for more work in Tampa.

“I never did get to boot camp,” Cruz joked.

He ended up serving three years total, returning home after the end of the war in 1945 and back to construction  — work he was familiar with because his dad had taught him the trade as a child.

“That was before electric tools,” he said. “My daddy taught me how to use the hand tools.”

This skill came in handy when Cruz’s family moved in his teenage years and he was tasked with refinishing and refurbishing donated furniture they received from friends and relatives. He said he also made furniture for the house out of clothing boxes his brother brought home. Eventually, that work got easier, when those tools became electric, though Cruz said “they weighed a ton” at first. Outside of the advancements in his own industry, Cruz said the technological advancement he was most impressed with in his lifetime was the jet plane.

“When I was a kid, it was horses and wagons,” he joked.

And while he spent most of his young life in Florida, settling at the Wyoming Veterans’ Home in 2017 brought back familiar memories from his time spent as a self-described cowboy in Cuba for two years.

“I had a little horse and I had to see that the cows and the oxen — they used to have oxen instead of tractors — see that they got fed and watered,” he said.

In Cuba, Cruz said they farmed sugar cane, fruit and avocados, all while earning just 20 cents — or a peseta — each day.

While no longer a Cuban cowboy, Cruz said he is enjoying his time back in cowboy country. He is fond of the area — in spite of the cold — because he gets to be near one of his sons in Sheridan and around a community that is cognizant of and thankful for their veterans.

Despite his dislike of the cold weather, he was treated to a windy, 35-degree day for his birthday, warmed by a bowl of hot chicken noodle soup for lunch. While eating, he reflected on his century of living and what got him this far.

“Mostly … eating right, don’t eat a lot of junk stuff,” he said. “And get plenty of fresh air and sunshine.”

But above all, Cruz said, it’s crucial that everyone learns to live together and remembers a lesson he learned from his mom — “Help anybody. Don’t worry about who they are or what they are.”

Ryan Hanrahan joined the Bulletin in October 2020 and covers county government, schools and health care. If you have ideas or feedback, reach out at ryan@buffalobulletin.com.