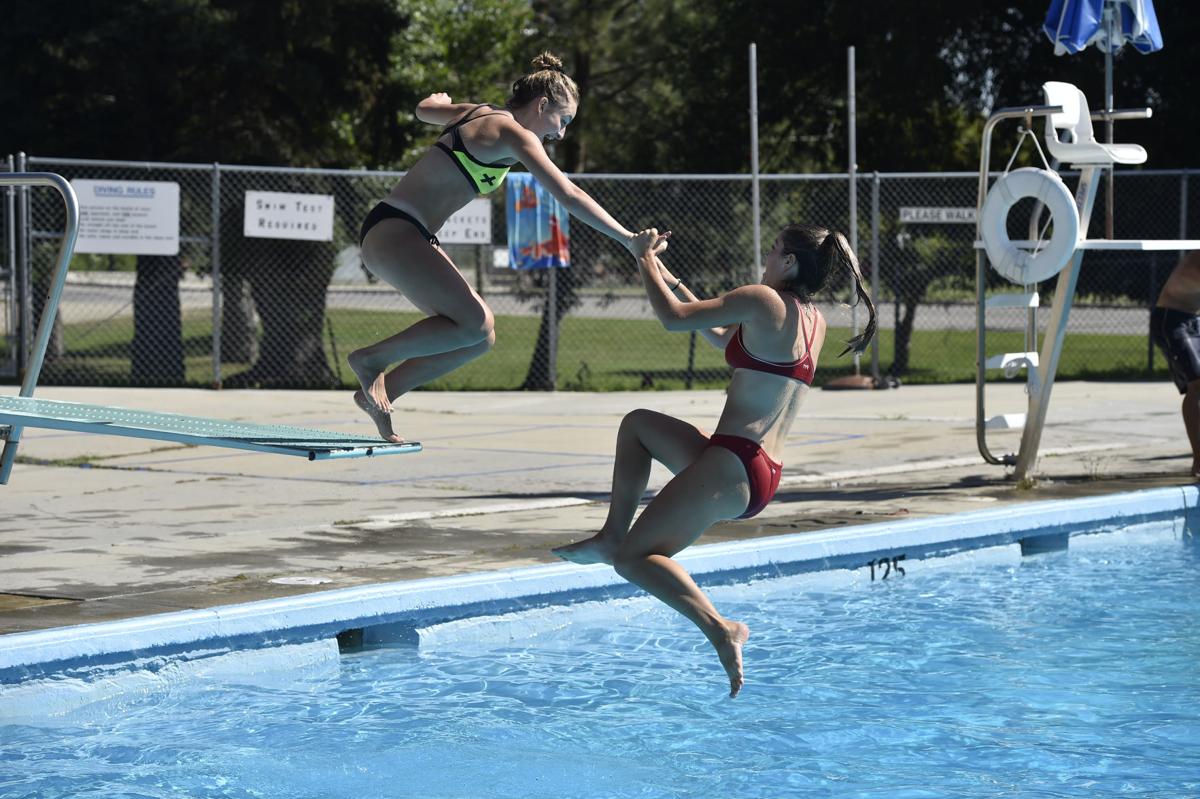 Bulletin photo by Andrew D. Brosig Lifeguards Seren Chapin, left, and Riley Fowler go off the end of the diving board as they portray unruly swimmers during emergency drills Aug. 14 at the swimming pool in Buffalo. 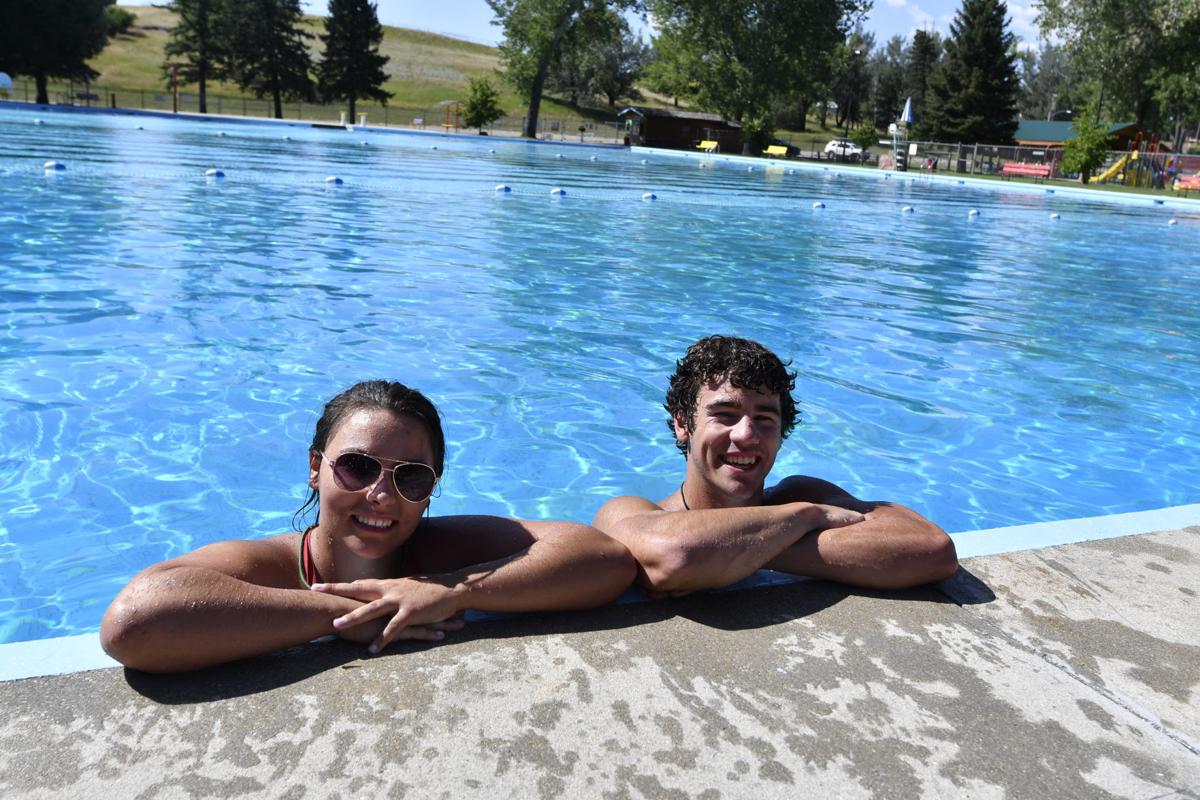 Bulletin photo by Andrew D. Brosig Lifeguards Kiera Vasco, left, and Brice Austin pose Aug. 14 at the edge of the Buffalo City Pool. Vasco will take over next year as manager and Austin will become assistant manager next year as Marcie Leis plans her retirement after about 30 years in charge of the pool. 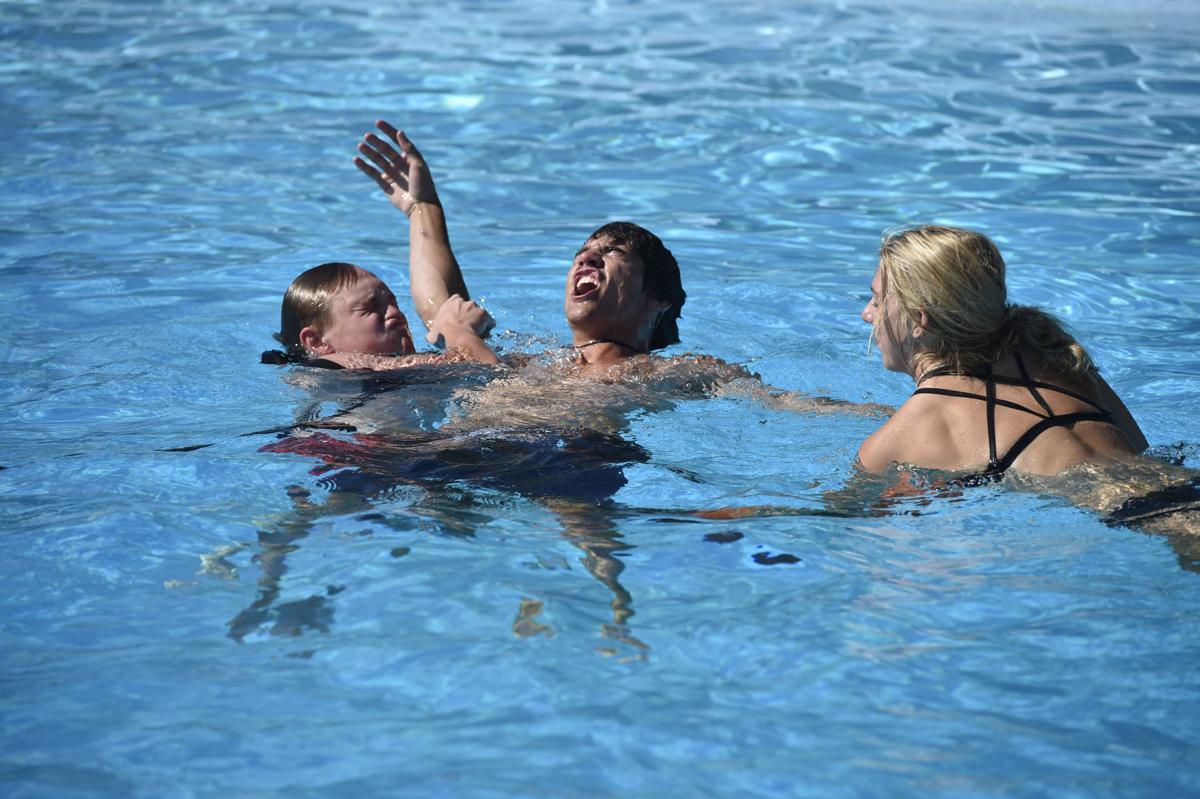 “It was an awesome season – but this is the coldest, rainiest season we’ve put in, in a long time. The numbers were down, but on the hot days, oh my goodness. You can easily pack 500 people in here and not realize it.” - Buffalo City pool manager Marcie Leis

A lifeguard sits in his tower chair, surveying the activity in and around the Buffalo city pool.

“No running,” he shouts. “One person on the diving board at a time.”

Then, a thud rises above the other noises ringing across the water – someone has hit his or her head on the diving board. The lifeguard springs into action, flinging himself directly from the chair into the water, a life-saving floatation device attached by a long cord to his ankle.

Fortunately, this time, it’s a drill, part of the weekly training sessions local lifeguards participate in to keep their skills sharp.

“It’s important; so they have a lot of practice diving off the lifeguard chair with the tube,” she said. “Knock on wood, during a normal day, we don’t see many rescues, if we’re on top of things. But when it does come up, it’s always shocking – you’ve got to be ready, you’ve got to be practiced.”

There are relatively simple techniques the lifeguards learn and drill on during the weekly gathering, typically set for Wednesdays one hour before the pool opens, Leis said. One is called “inline stabilization,” which involves keeping the neck and back straight and immobile using the victim’s own arms, which is important if there’s the possibility of an injury that could result in spinal cord damage, she said.

If the worst should happen and an accident occurs that requires an ambulance, each lifeguard has a specific job to do – from the one or two individuals who go into the water to stabilize the victim to clearing other people at the pool away to unlocking the main gate so the ambulance can enter. That’s drilled into the lifeguards so that they immediately move to their assigned duties, should it be necessary.

‘Changing of the guard’

Leis has been managing the Buffalo city pool for almost 30 years, she said. As this year’s season winds to a close, she’s getting ready to hand over manager duties to a pair from the current crew.

Starting next year, Kyera Vasco of Buffalo will take over managing the pool, assisted by Brice Austin of Kaycee, who will become the new assistant manager. Both are students at Sheridan College; Vasco is studying athletic training and Austin is in the accounting program.

Vasco has been a lifeguard in Buffalo for two years. Leis said she’s confident in her choice to fill the leadership spot.

Vasco said she wasn’t looking to take over the manager’s position at the pool. But when Leis announced her plans to retire at the end of the current season, Vasco decided she was ready to step into the job.

Austin, a first-year lifeguard in Buffalo, said he has mixed feelings about the new job. A frequent visitor to the Buffalo swimming pool during his younger years, Austin thinks his history at the pool makes him uniquely suited to the position of assistant manager.

“I’m going to really enjoy managing next year with Kyera, but I’m going to miss Marcie – that part’s kind of sad. When I was younger, Marcie would be blowing the whistle at me all the time. It seems like the troublemakers make the best lifeguards. We know what to look for.”

As the season nears a close – the pool will close at the end of the normal day on Aug. 25 – Leis said the final numbers aren’t in. But it was obvious the unusually cool, wet spring kept attendance numbers down.

“It was an awesome season – but this is the coldest, rainiest season we’ve put in, in a long time,” Leis said. “The numbers were down, but on the hot days, oh my goodness. You can easily pack 500 people in here and not realize it.”