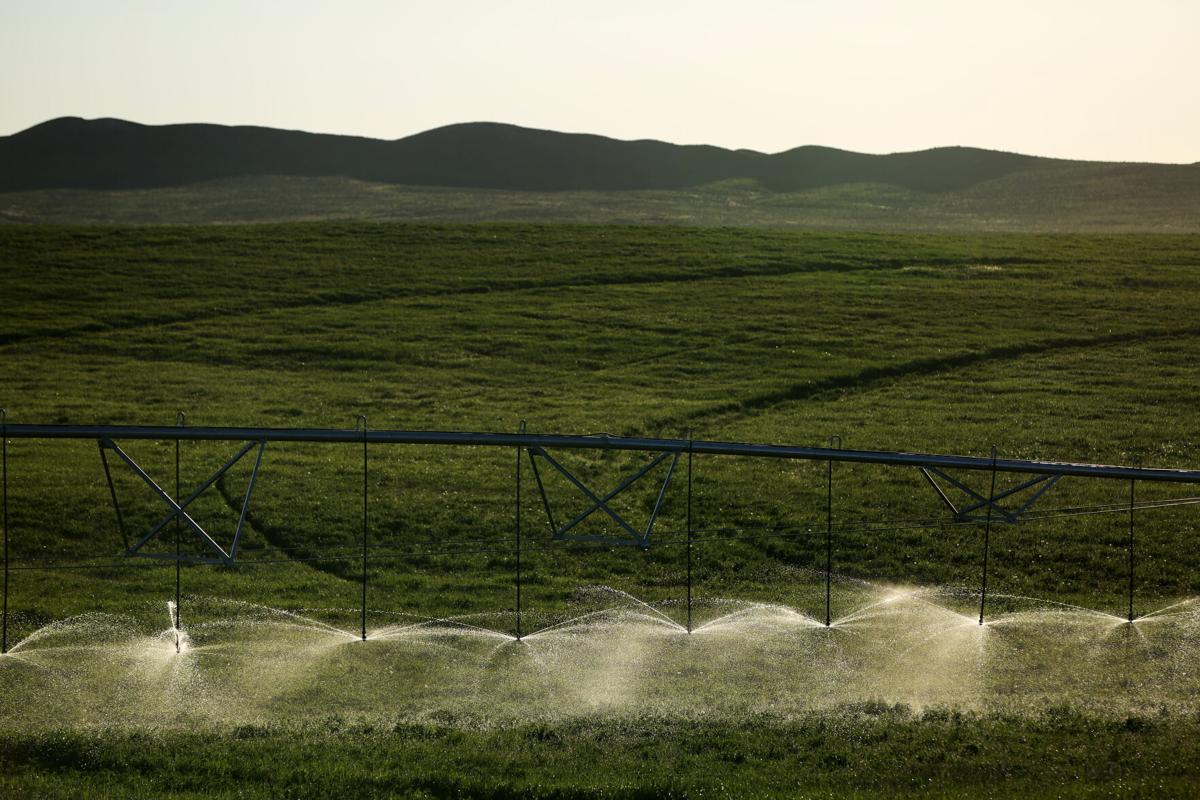 Bulletin photo by Jessi Dodge Runoff water is still in full supply coming off the mountain so the fields are getting all the water they need at the TA ranch for now. With the water access full and temperatures rising this week, they are hoping the hay will make a big jump in height this week before they make the first cut of the year. 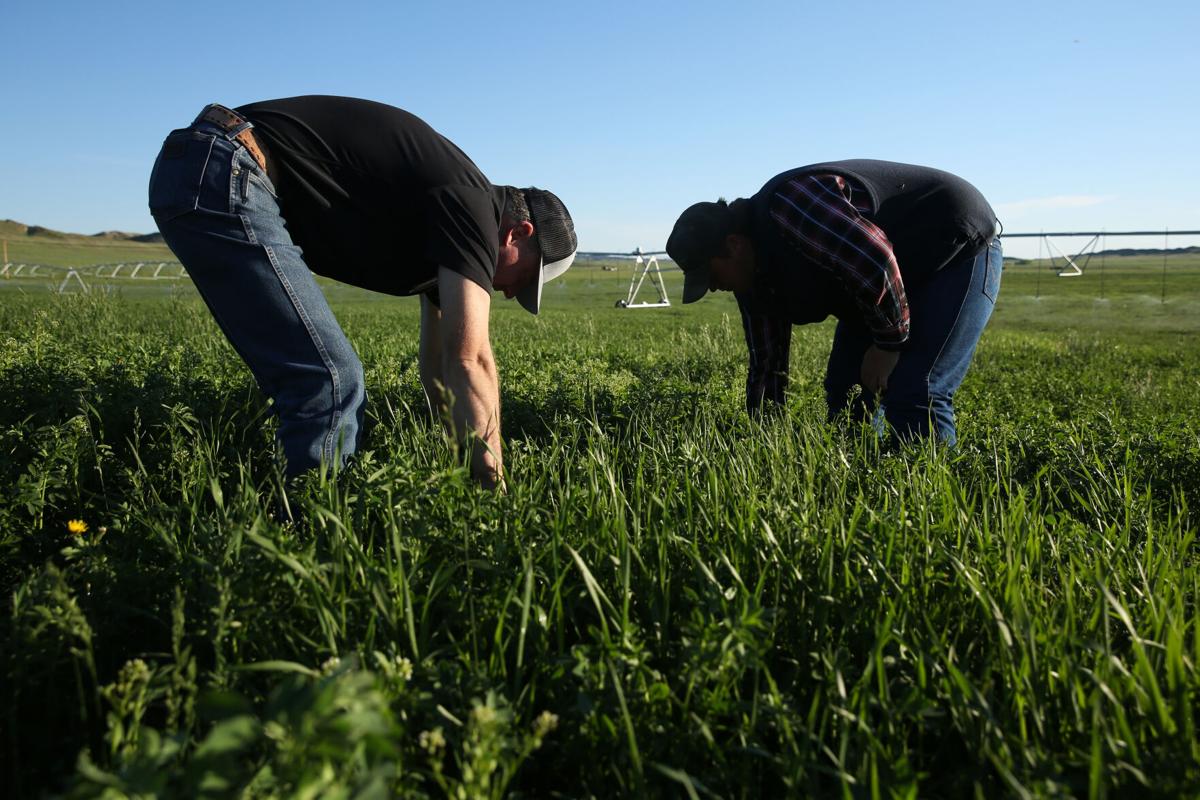 Bulletin photo by Jessi Dodge Jason Watts, a hay broker running HayWerks, checks on the strength of the alfalfa with Tyler Terry, the TA ranch farm boss, on Friday morning, June 4, 2021. This is Terry’s first year at the TA ranch after previously working up French Creek. The hay is about knee high and Terry is hoping that the weather this week will help bump it up a foot.

While last summer’s drought conditions created difficulty for many Johnson County hay producers — cutting the crop for some to as little as one-third of the normal yield — hay conditions are so far improved. Continued spells of hot temperatures, though, could mark a return to difficult conditions.

Jason Watts, owner of local hay brokerage HayWerks, said that so far this year moisture in the area is about 60% to 70% improved over 2020, and as long as cool evenings and plentiful runoff water persist, the crop will look better.

“With these cool evenings right now, it’s really going to be a good balance, especially the alfalfa,” Watts said. “When these high temperatures peak …, that alfalfa does phenomenal on it. So, it’s actually a benefit, as long as we have the cool nights still.”

But the currently improved conditions don’t necessarily mean more supply will be available this year, Watts and local rancher Dave Belus said, because it’s likely that growers will need to fill their own supply before selling to other ranchers.

“I can still see kind of a low supply because people that fed all of their stockpiles are completely out,” Watts said. “They’re going to replenish those stockpiles before they start selling extra hay, and that’s where I’m getting the phone calls on right now.”

“Our hay piles, I would say all across the county, are pretty well depleted,” he said. “There’s not a lot of hay sitting around anywhere else, so that’s going to cause hay prices to be up. I hate to put a dollar amount on it, but they’re going to be expensive.”

Watts said the conditions are again superb in the same area of central and eastern Montana that helped supply hay to the county last year — which he expects to be able to help again this year — though the “dire need” for hay from ranchers in drought-stricken areas of Colorado could increase competition.

And the lower-than-normal hay supply could be extra problematic for ranchers in the county because peak rangeland growth is expected to be low this summer — as low as 40% of the average in northeast Johnson County — according to Blaine Horn, UW rangeland extension educator.

For Buffalo to Mayoworth, Horn estimates peak production will be around 75% of average and could be lower in the Middle Fork-Crazy Woman area.

In southern Johnson County, production could be as low as 35% of average in Midwest, but up to 70% around Sussex, Horn wrote.

“The bottom line is, if you have not instigated your drought plan yet, you probably will want to,” Horn wrote in a range forage outlook report. “... Don’t count on June rains to help much (if they occur), any that come may keep the grass green but will grow little additional forage.”

Horn said the region is currently 2.5 inches below normal average precipitation, so 5 inches would need to fall in June to bring the region up to average.

“Not good odds for this happening,” he wrote.

For Belus, rangeland at his ranch east of Lake DeSmet is in “really poor condition,” and he said people in his area will likely have to initiate their drought management strategies soon.

“From Buffalo to Powder River, it’s below average, and on the other side of Powder River, it’s extremely dry and that’s going to play into the hay because people aren’t going to have the forage to get their cattle through fall and into winter like most years,” he said.

As for his hay crop, Belus said, conditions remain extremely dry, and his crop is only green right now because of the recent rains.

Last year, Watts was forced to bring in around 200 loads of hay from central Montana — up to 320 miles away — for Johnson and Sheridan county ranchers because of the poor conditions, according to previous Bulletin reporting.

This increase from his typical 50 to 60 loads each year was due to an unusually warm and dry spring that turned into a significant drought over the summer months. This contributed to hayfields across the county producing lower tonnage per acre in 2020.

That drought persisted into the fall, with the majority of the county categorized as experiencing extreme or severe drought, according to the U.S. Drought Monitor.

At the TA Ranch south of Buffalo, farm boss Tyler Terry said recent heat has actually been fantastic for their alfalfa, some of which is currently hip high, and he expects that the crop could grow as much as a foot in the next week.

“We had kind of a cold spring this year, so that sets you back a little bit, but with this heat that we’ve been getting, we’re doing a lot better,” he said.

Terry said that despite the cold spring, the moisture the county received was crucial. This helped the crop and also provided good availability of irrigation water that Terry has been consistently using.

He said they are still irrigating with runoff water, so they are able to fully water their fields without restrictions on how much water they are using.

“There’s still a ton of snow on that mountain, which is what we want to see,” he said. “... When the creek starts dropping in levels and we don’t have any more of that big runoff water, then they’ll start regulating that, and eventually when the creek gets low enough, we have the Muddy Guard Reservoir that we pull out of.”

On May 24, snowpack in the Powder River Basin sat at 97% of median, according to Jim Fahey, Wyoming Natural Resources Conservation Service hydrologist, though extended high temperatures have likely decreased that amount.

After last year’s crop was lost before the second cutting at the TA Ranch due to some pivot and irrigation issues, Terry said, he’s hoping to get about three tons of hay on the first cut — currently planned to take place between June 15 and June 20 — and about 1.5 tons on the second cut. Because the TA Ranch is primarily feeding horses, Terry said, the majority of its alfalfa will actually be sold.

Watts’ largest remaining concern for the hay crop this year is the recent, frequent heavy rainstorms the county has experienced that could negatively affect the crop currently growing by forcing ranchers to wait to cut or to degrade quality if rained on once cut and sitting in the fields. Because of this, he said, he’s already started to bring some of last year’s leftover hay from over the Bighorn Mountains in Burlington.

“As much rain as we’ve had recently, I’ve seen these weather patterns where it could affect this first crop if we continue to get these little rainstorms that come in,” he said. “So, I’m bringing some hay in right now so customers have something to fall back on in case there’s a problem.”

According to the National Weather Service seven-day forecast for Buffalo, some isolated rains are forecasted for Thursday. In Kaycee, no rain is expected for the remainder of the week.

Despite his remaining concern, Watts said he is hopeful that the improved moisture conditions he’s seeing so far this year in the county can help some ranchers’ bottom line.

“People are going to be excited, just for the moisture this year compared to last year,” he said. “Especially from a pocketbook perspective.”

What will you give your valentine on Valentine's Day?