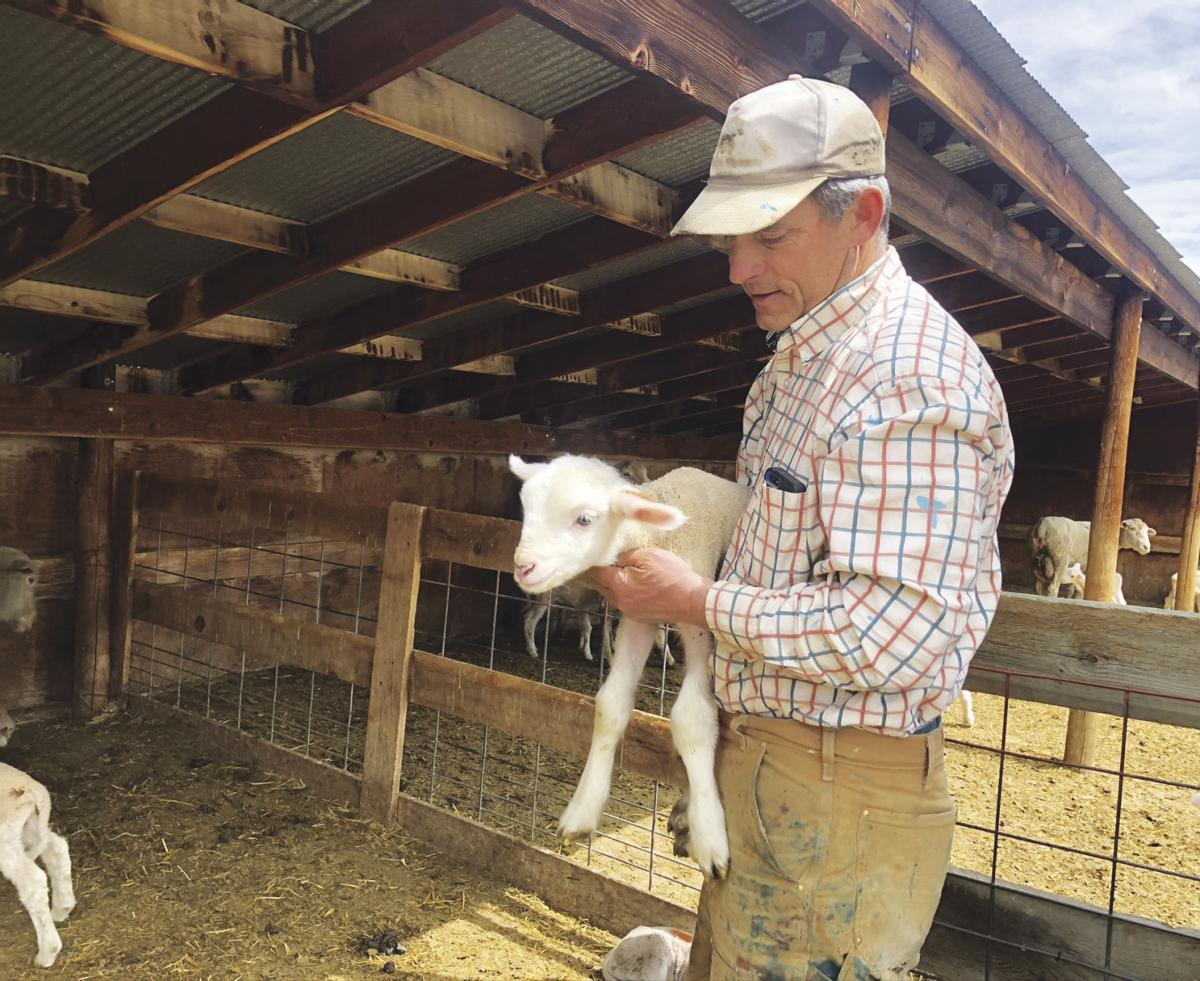 Mike Curuchet checks the health of a days-old lamb on his ranch southwest of Kaycee. Curuchet serves on the Wyoming Wool Growers Association Board of Directors, and said the board has joined other industry groups seeking financial relief for the sheep industry. 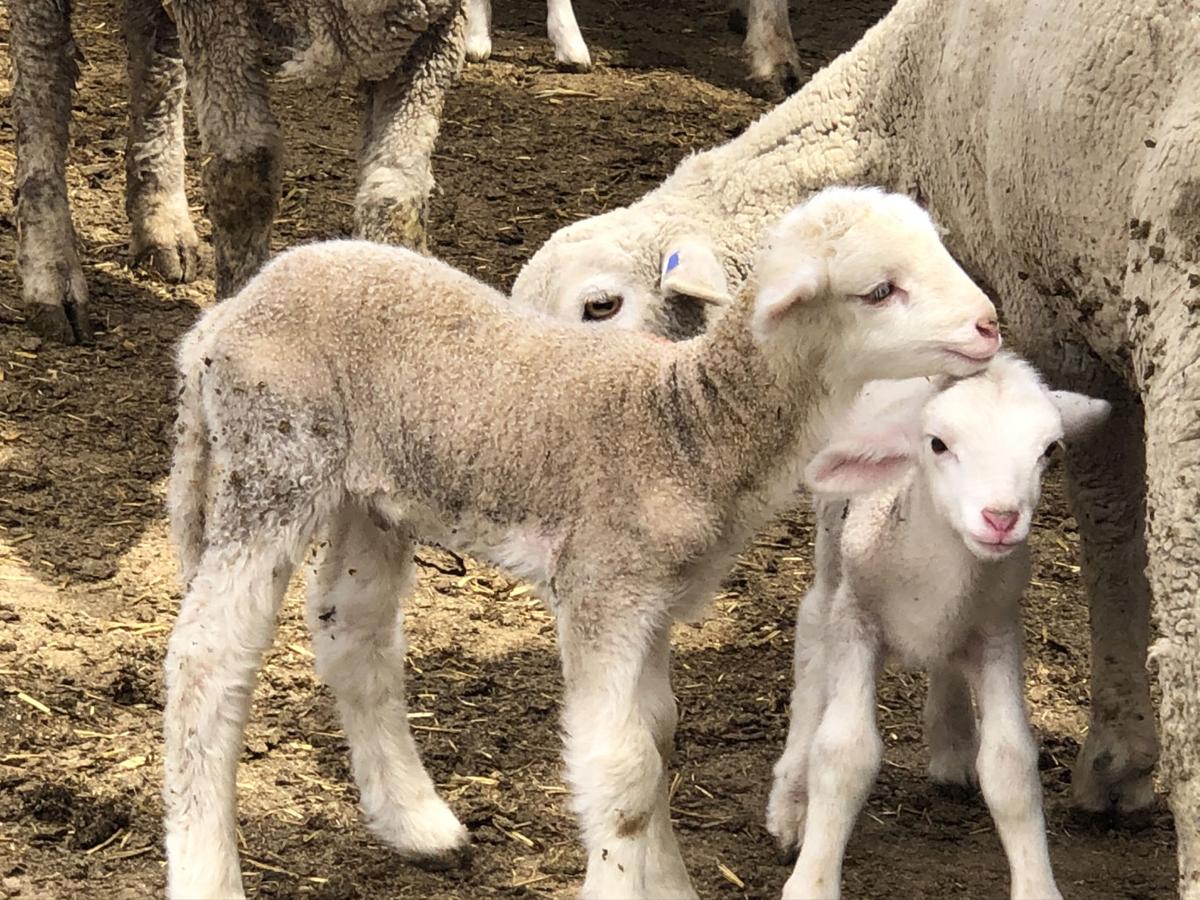 Since the start of the coronavirus pandemic, the market for feeder lambs has declined about 40%. In America, lamb is more frequently consumed in restaurants than in the home, and so as restaurant sales have declined, so has demand for lamb.

Mike Curuchet is surrounded by hundreds of ewes and their lambs, talking over the bleating of the young animals, many of which are only hours old.

The sun has been out all morning, warming the air sufficiently to cause Curuchet to shed his jacket and the lambs to frolic playfully.

Heading into the spring season, Curuchet was forecasting the best year for lambs he’s had in a while. In fact, as recently as February, the Livestock Marketing Information Center was projecting strong lamb prices (both feeder and slaughter) through the first three quarters of 2020. Though the February outlook did note that the coronavirus – at that time primarily concentrated in Wuhan, China – could cause “uncertainty,” a modern, federally inspected lamb packing plant in Colorado (Colorado Lamb Processors near the town of Brush) was scheduled to open in late spring,s and the American Lamb Board was in the midst of a multiyear marketing campaign to increase consumption.

But by the time that Curuchet began lambing in mid-March, it was clear that the coronavirus was going to impact both wool and sheep markets as the coronavirus disrupted supply chains and consumer habits.

The wool market is heavily dependent on exports; seven of every 10 pounds of wool produced in the United States found their way to a container headed overseas in fiscal year 2017, according to the U.S. Department of Agriculture. And over 50% of lamb consumed in the United States is eaten at a restaurant, Curuchet said, and that industry has experienced more than a 75% decline in sales since the middle of March.

“I talked to a guy this morning – he’s trying to sell some fat lambs now – and they’re down 40% since this whole thing started,” Curuchet said. “They’re built up now with a lot of lambs on feedlots, and there’s just no demand for lamb. There are gonna be some tough times without a doubt.”

Even Easter, the high holiday of lamb consumption when retail lamb meat sales spike by as much as 300%, was a bust this year as fewer families gathered for a big meal and restaurants were closed for Easter brunches and dinners.

This is the ranch that Mike Curuchet grew up on, just over the Johnson County line in Natrona County, 20 miles southwest of Kaycee. Since the early ’80s, Curuchet has been building his herd with an eye to improving the herd’s genetics.

As he moves through the lambing shed that houses the lambs that were born that day or the night before, Curuchet points out the ram lambs – only hours old – that are marked indicating that the lamb should be kept as a replacement. Even at that early age, certain lambs catch his eye. The replacements should come from ewes that have good maternal instincts and birth twins.

“It takes a lot of learning as you go – especially looking at them that young, but after a while you kind of know what you’re looking for,” he said.

Even before the coronavirus, though, sheep ranchers have had a tough go of it recently. The trade impasse with China greatly reduced demand for wool and caused a lot of volatility in the wool market. According to the USDA National Wool Review, 89% of the wool export market dried up as a result of the trade war.

“The long term in this business scares me quite a bit,” Curuchet said. “The trade deal with China caused things to go down quite a little before the pandemic started, and I don’t see the wool markets getting much better anytime soon because we’re going to be at odds with China for quite a while.”

In fact, last spring, when Curuchet sheared his sheep, the wool market was so low that he held onto the wool clip, hoping that prices would rebound. They did not.

“It was some of the best wool I’ve ever had,” he said.

Now he’s got two years’ worth of wool in storage, waiting for prices to come back.

In a letter, American Sheep Industry Association President Benny Cox called on the USDA to provide relief to America’s sheep and wool producers because of the impacts of COVID-19. Cox wrote that current estimates show a projected direct farm-level loss of $125 million due to significant declines in feeder and slaughter lamb prices as a result of the loss in consumer demand for American lamb with a total economic impact to the American lamb industry in excess of $300 million.

Curuchet, who also serves on the Wyoming Wool Growers Association Board, said the board, along with national industry groups, has petitioned the USDA for $350 million in aid for the sheep industry.

It appears that the industry is poised to receive the requested aid, though how it will be dispersed has not yet been decided.

‘Our job is right in front of us’

Despite all that is spiraling in the world and the sheep industry, Curuchet is matter-of-fact. He is keeping abreast of all the industry news, but this time of year is too busy to become distracted by things he can’t control.

“Our job right is front of us, and so we do our job like we normally do,” he said. “And then you have other things you can’t predict either – the weather, lion kills.”

And there still may be good to come out of this, Curuchet said.

“I think we’ve learned – like a lot of other businesses have – how much manufacturing of our products happens in China and how dependent we are on them,” he said. “I think every business is going to take a good look at it. That’s one thing that I would hope to see more manufacturing in this country so we’re not so dependent on China,”

Partial cloudiness early, with scattered showers and thunderstorms during the afternoon. High 82F. Winds SE at 10 to 20 mph. Chance of rain 40%.