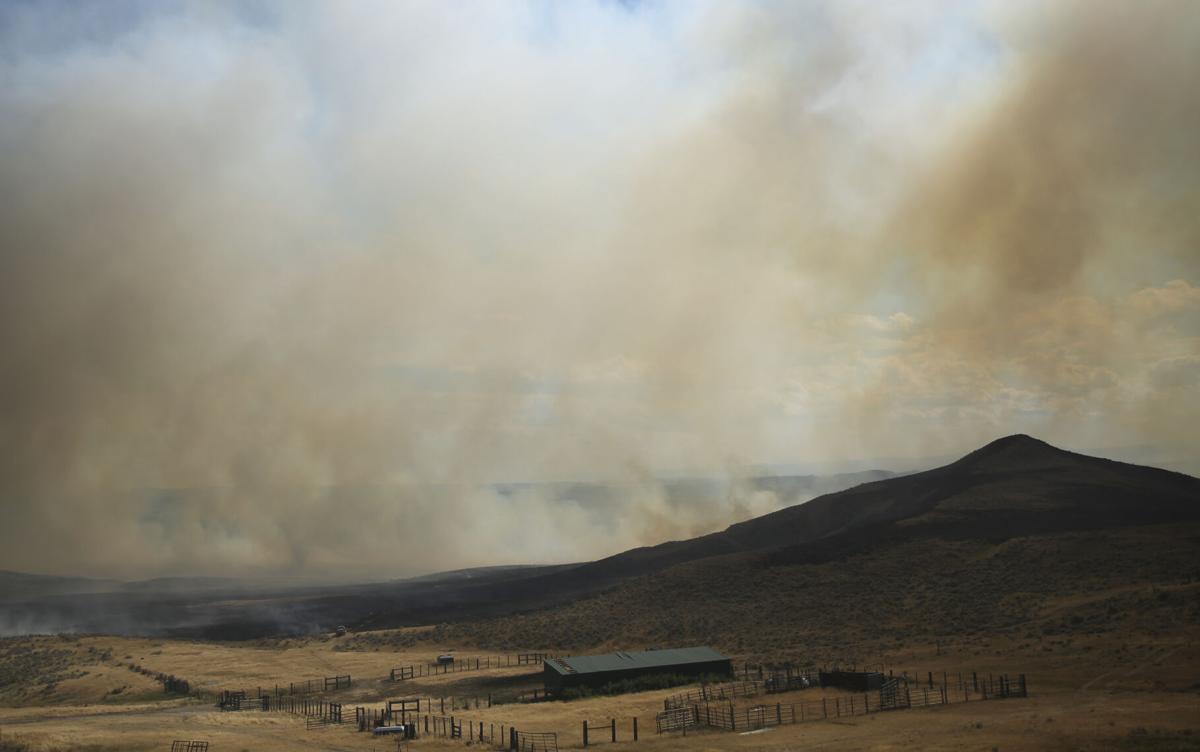 A fire burned southeast of Ucross on a combination of public and private lands July 23.The fire is believed to have been ignited by a lightning strike. During the past week, at least four grassfires have been reported in John- son County. Persistently dry, hot weather has elevated the fire danger for both rangeland and forests. 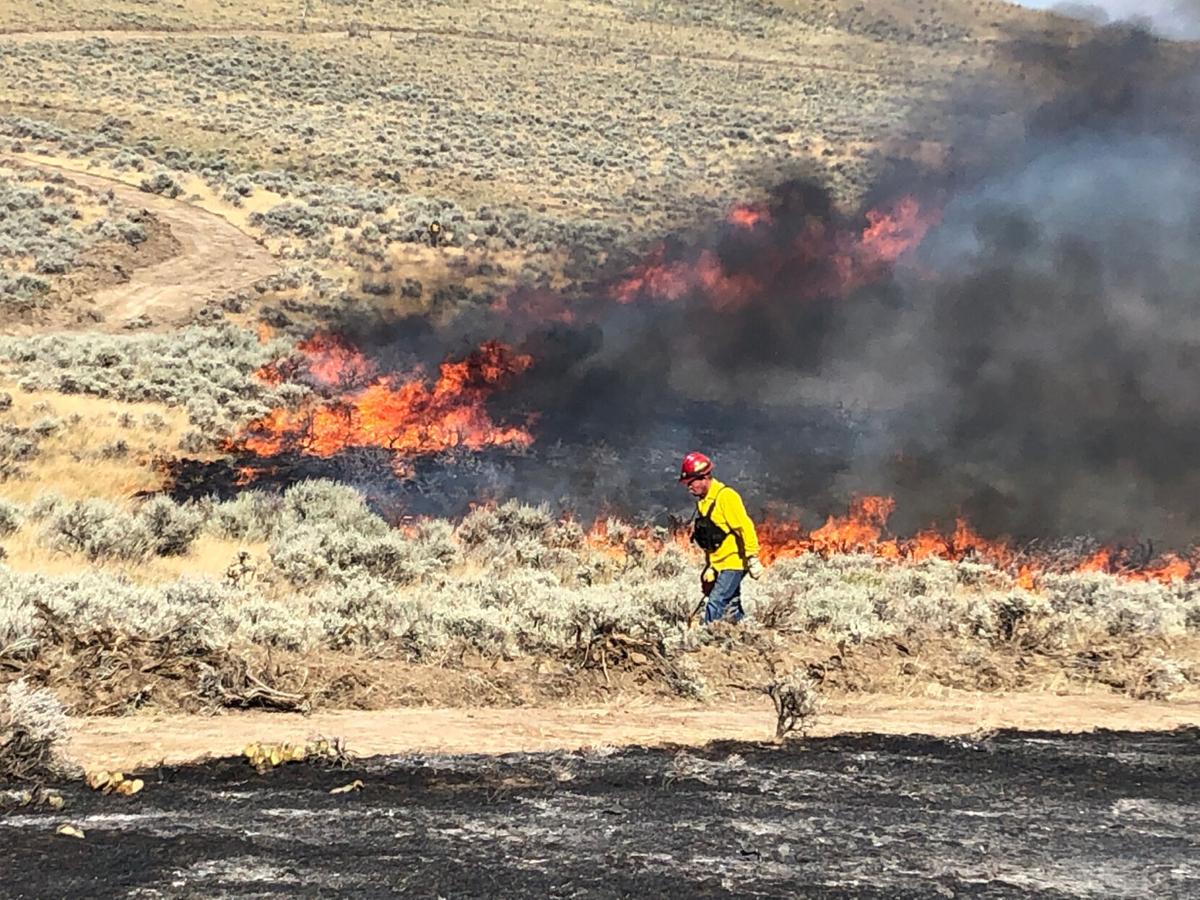 A firefighter walks along the fireline at the brush fire near Ucross. Courtesy of Leigh Braley, Johnson County Sheriff's Department 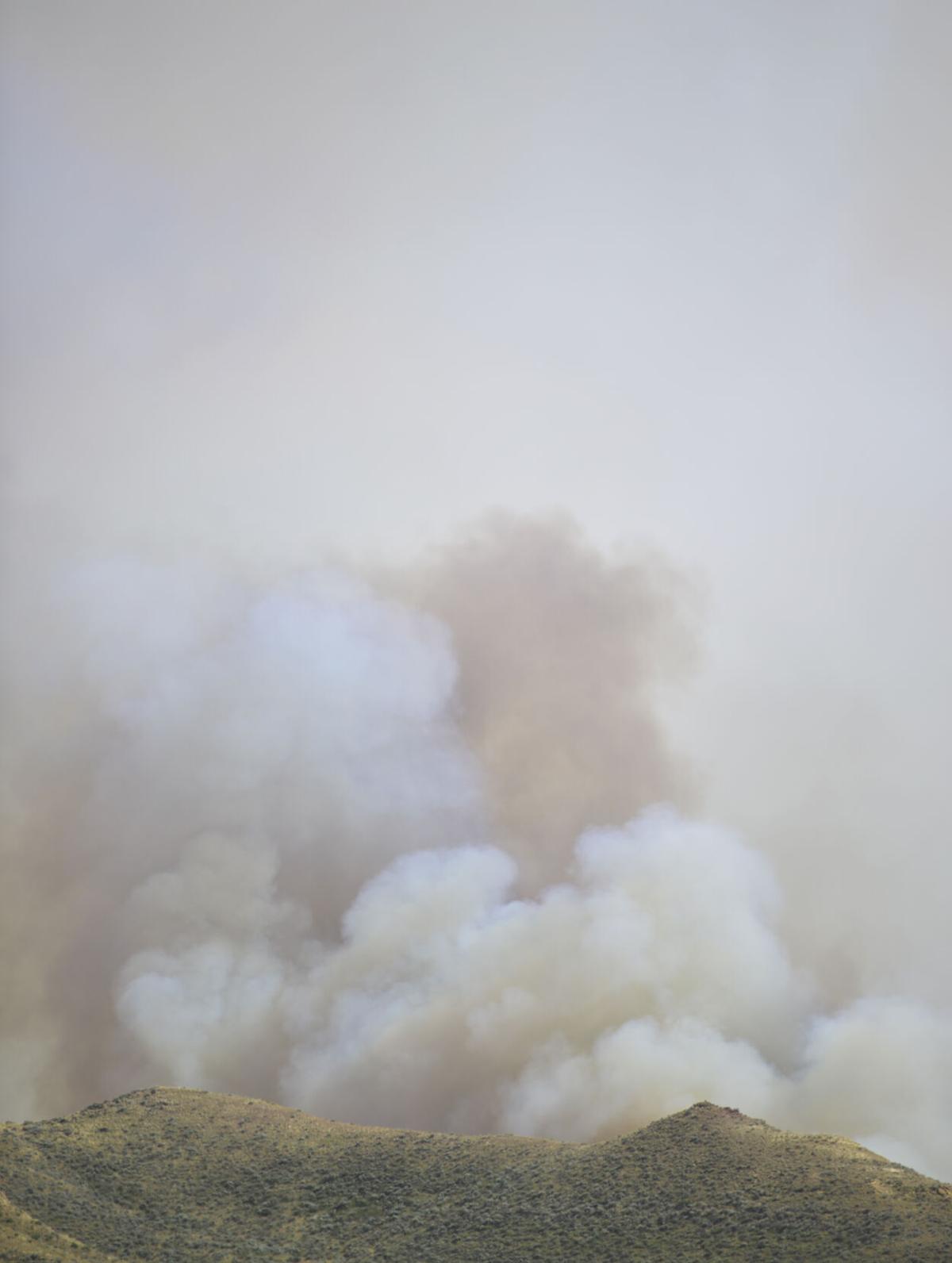 The plume of smoke rises in shades of light and dark from the hills at the Double Cross fire. The fire moved over and between hills to ultimately burn more than a 1,000 acres.

A fire burned southeast of Ucross on a combination of public and private lands July 23.The fire is believed to have been ignited by a lightning strike. During the past week, at least four grassfires have been reported in John- son County. Persistently dry, hot weather has elevated the fire danger for both rangeland and forests.

A firefighter walks along the fireline at the brush fire near Ucross. Courtesy of Leigh Braley, Johnson County Sheriff's Department

The plume of smoke rises in shades of light and dark from the hills at the Double Cross fire. The fire moved over and between hills to ultimately burn more than a 1,000 acres.

A lightning strike caused fire to flare up again in Johnson County on July 23, this time south of Ucross. Called the Double Cross fire, it ultimately blackened 1,118 acres of ranchland.

It wasn’t the only local fire burning that day. While crews worked to contain the Double Cross flames, across the county, the driveline fell out of a Dodge pickup on Interstate 25, sparking a smaller, 21-acre fire, said Ken Richardson, fire chief for the Powder River Fire District.

“That came awfully close to wiping out a residence on the old Highway 87, just north of Kaycee,” said Marilyn Connolly, Johnson County Emergency Management coordinator. “It’s so extremely dry, that (a spark) can set off a fire that can burn thousands of acres.”

One week earlier, another fire along I-25 burned through roughly 2,000 acres between Buffalo and Kaycee. That one was the result of a 12-foot pipe that had been dragged behind a vehicle, Richardson said. On the tip of a nearby rancher, he had discovered the pipe while looking for evidence. It had been dragged for so long by the time it fell to the ground that the end was rounded off.

“That could have started fires from Buffalo to... wherever they were going, we’ll never know,” Richardson said.

Within three days, crews had contained the Double Cross fire. The last truck left the area on Sunday, said Colby Richins, Johnson County Fire District chief. Six structures were threatened by the fire, according to Connolly, but none were lost.

In an average year, the county gets about 100 fire calls, Richins said. This year, July isn’t over and there have been more than 70 in a fire season that hasn’t paused since the Reno fire burned 12,000 acres in early June.

That’s a challenge for the local volunteer fire departments, Richardson said. “When the pager goes off, these guys, they’re ranchers, farmers, bookkeepers, oilfield workers, they have to stop their jobs making money to come put out fires that could potentially burn down people’s homes, ranches, cabins and infrastructure like barns and corrals.”

The pace of the 2020 fire season has made partnerships between counties and agencies all the more important, he added.

The 2020 fires have not only been frequent, but hot, Connolly said. No one can get close enough to do the ground work that might slow a fire’s spread, so local crews must rely on help from private contractors with blades and bulldozers to build fire lines through the grass and sagebrush. Some fires require additional air support from planes dropping a combination of red-tinted slurry and water.

As portions of Johnson County slip into the National Oceanic and Atmospheric Administration’s “extreme” drought category, even crews at high elevations are concerned.

“People need to be really cautious, because our conditions are every day getting a little bit worse from a fire perspective,” she added.

The summer’s often windy conditions have added an additional challenge to firefighting efforts.

“We had several red flag warnings for fire danger last week, and we’ve got a chance of dry lightning pretty much every day for the like 10-day forecast,” Weaver said. “People do really need to be vigilant out there.”

Connolly and Weaver listed common, avoidable causes of human-caused fires, including cigarettes, chains dragged behind vehicles or chainsaws and ATVs without a spark arrestor. In dry conditions, even the catalytic converter of a truck parked in tall grass is enough to cause a fire.

“We’ve had a lot of unattended campfires, which are not legal, (including) a couple different ones where they just basically lit a log on fire and then left it, which is really, really dangerous,” Weaver said.

Richardson urged landowners to take all possible measures to protect their homes and structures.

“If you’ve got a disc, put it on your tractor and put a disc line around your important stuff,” he said. “I don’t care if it’s a wellhouse or your home, a barn – anything you want to save.”

In addition to helping prevent starts, everyone should report any sightings of smoke or flames, Weaver said. Although several additional small fires popped up in the mountains and across the plains over the past few weeks, crews were able to quell them quickly thanks to early detection.

Richardson said his fire service goes back to the early 1980s. He was in Wyoming for the 1988 Yellowstone fires that consumed nearly 800,000 acres in the park over the course of several months, only abating when snow began to fall.

“I think it could be that bad, potentially worse than 1988, because we’ve had no rain,” he said. “We’ve had nothing. If this keeps going the way we’re going, if we get a fire in the Bighorns there’s not going to be anything that stops it other than weather.”

Mara Abbott joined the Bulletin as Report for America corp member in 2019. She covers energy and natural resources. Mara’s work has appeared in the Wall Street Journal, USA Today and Runner’s World.

How will you vote in the upcoming August primary election?

Some clouds. A stray shower or thunderstorm is possible. Low 61F. Winds WNW at 15 to 25 mph.

Some clouds. A stray shower or thunderstorm is possible. Low 61F. Winds WNW at 15 to 25 mph.

Sunny along with a few clouds. A stray shower or thunderstorm is possible. High 82F. Winds NNW at 15 to 25 mph.