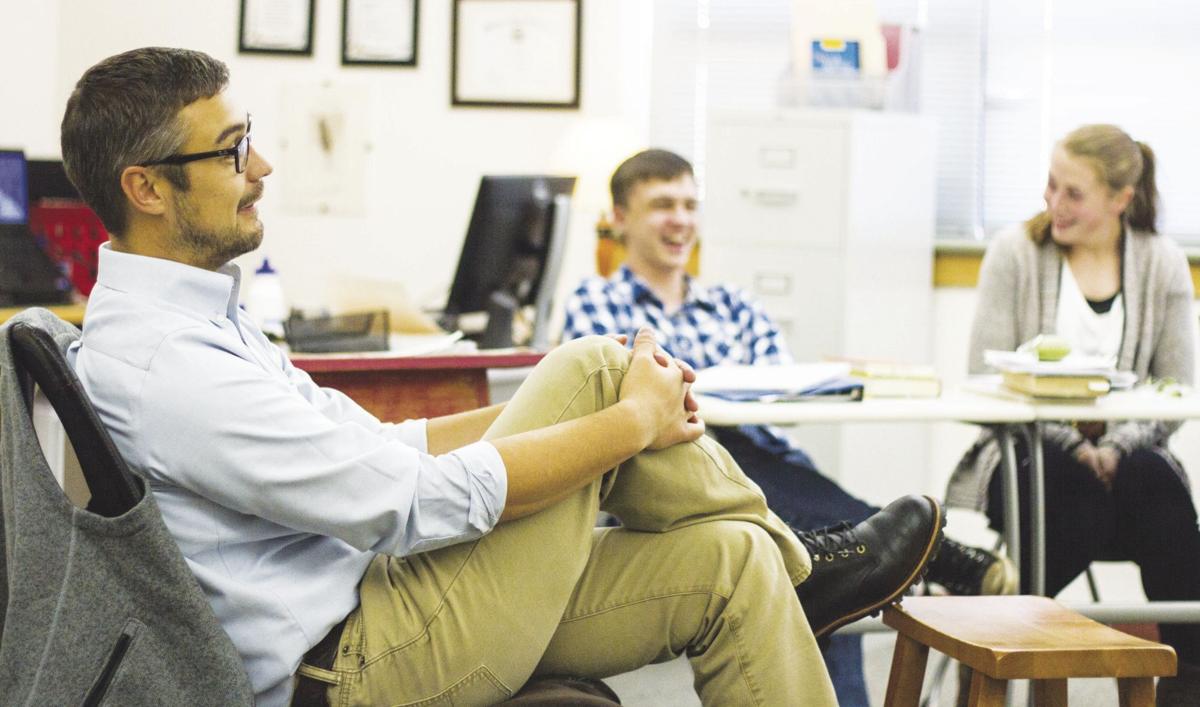 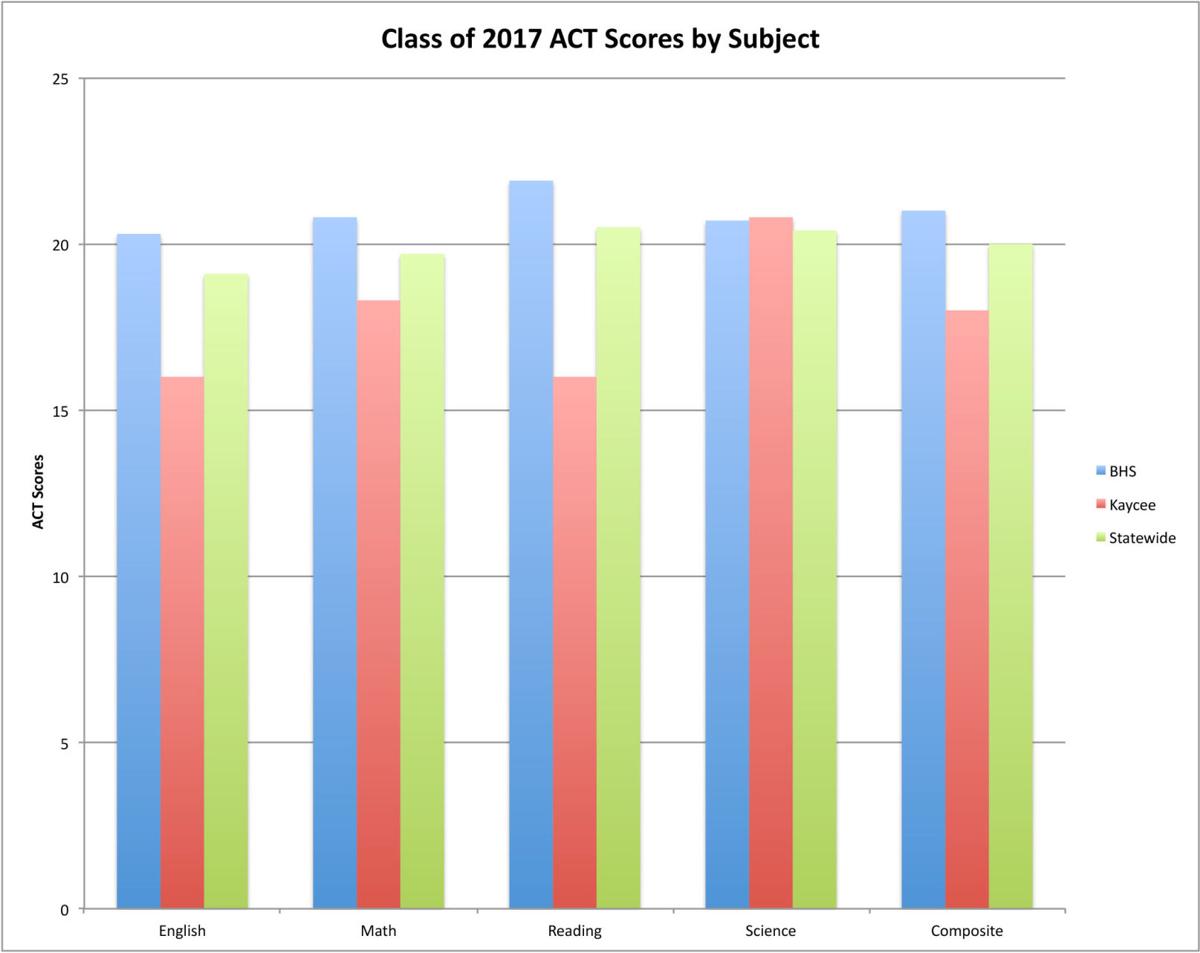 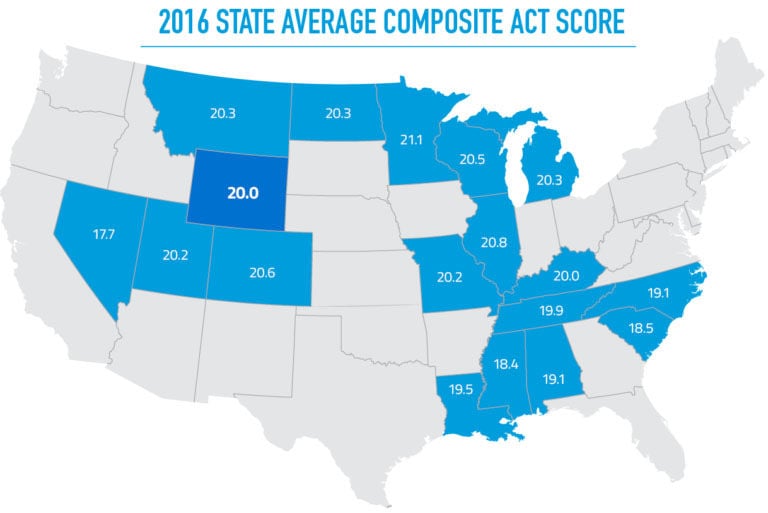 Wyoming juniors earned a composite score of 20 on the ACT exam, making Wyoming 10th of 18 states that require the test of all high school juniors.

Wyoming juniors earned a composite score of 20 on the ACT exam, making Wyoming 10th of 18 states that require the test of all high school juniors.

Buffalo High School’s class of 2017 outperformed their peers statewide in every category on the ACT, according to a recent report from the Wyoming Department of Education. The class’s composite score of 21 was a full point above the state average.

Principal Chad Bourgeois said that, for the past five years, BHS students have tended to hover a point or two above or below the state average, so the scores are consistent with how the school has performed historically.

The ACT is a college-readiness exam that, in many states, is taken only by college-bound students and includes English, reading, math and science sections. Nationally, 59 percent of 2017 high school graduates took the test during their junior year. However, in 2012 Wyoming adopted the ACT as the statewide high school assessment that is used in statewide accountability measures and began to require the exam of all high school juniors.

Despite scoring well against their Wyoming peers, scores in both Wyoming and Johnson County were lower than national benchmarks for all subjects except English.

But Bourgeois cautioned against comparing Johnson County students to college-readiness benchmarks because the state tests all students, not just those preparing for college.

“Since I’ve been here, about 25 to 35 percent of the students choose not to go into college right after high school,” Bourgeois said. “The reality is that we’re using an entrance exam – which is what the ACT is – as a predictor of how you’ll do in college – as an achievement benchmark, and so we have to look at all that data.”

Instead, Bourgeois said he’s always been more interested in how BHS stacks up against its 3A peers, because those schools are more similar in student demographics, including the percentage of students who have spent their high school years preparing to enter a bachelor’s degree program following graduation.

The Class of 2017 scored very well when compared with 3A students statewide. Only Star Valley High School, Cody High School and Jackson High School students had a higher composite score than BHS students.

Bourgeois said that in a relatively small high school like BHS, where every teacher and administrator knows every student by name, the scores on the ACT assessment are usually quite predictable and don’t often reveal much about students.

The challenge he and his staff face, he said, is ensuring that every student is prepared – whether for college, the workforce, a vocational program or the military – when they leave BHS.

“I like that idea, because it has some relevance,” Bourgeois said.

Scores down at Kaycee High School

At Kaycee High School, the class of 2017 scored higher than the state average only in science. The school’s composite was 18; two points behind the state average. Six students took the test.

“We understand we have some more work to do,” Gilbert said. “We are focusing on each individual child – what skills we can help them attain and help them address potential weaknesses.”

The last time the class was tested on a statewide assessment – the PAWS test during their eighth-grade year – the cohort produced low scores on both reading and science subject tests. More than half of the class was underperforming in those subject areas.

In a small school like KHS, Gilbert said, the teachers know each student and are aware of the individualized instruction each student in the class of 2017 needs before graduating this spring.

“They may not all be pursuing a bachelor’s degree, but virtually all students are pursuing some sort of education – whether that’s community college or tech school, and we want to be sure they’re prepared,” she said

But in a small school, with a small number of students being tested, one outlier – on either the high end or the low end – can drastically affect the class’s averages.

Gilbert said the school is making a “concerted effort” to offer juniors more timed testing opportunities as preparation for the exam, which is timed. She also said that as part of the school’s strategic plan, administrators and teachers have begun to look closely at how the high school curriculum aligns with the test.

“We began that work last year as part of the strategic plan,” Gilbert said. “And, I would expect we would see some improvement.”

For the first time, ninth- and 10th-graders statewide took the ACT-Aspire test. Statewide and in Johnson County, students scored below national benchmarks in math, reading and science, but higher in English.

As with the full ACT, the ACT-Aspire has benchmarks that are supposed to be predictive of college readiness. And like the ACT, students are tested on English, math, reading and science.

If a student meets or exceeds the benchmark for the ACT-Aspire, they are “on target for college readiness when they take the ACT college readiness assessment in the 11th or 12th grade,” according to the ACT website.

At BHS, ninth-graders performed slightly higher than the state average in all subjects.

BHS 10th-graders were better than the state average in all subjects except reading.

Ninth-graders at KHS fared slightly worse than the state average in all areas.

KHS 10th-graders did better than the state average in math and reading.

Because this was the first year the ACT-Aspire was given to ninth- and 10th- graders statewide, there is no previous state data to compare.