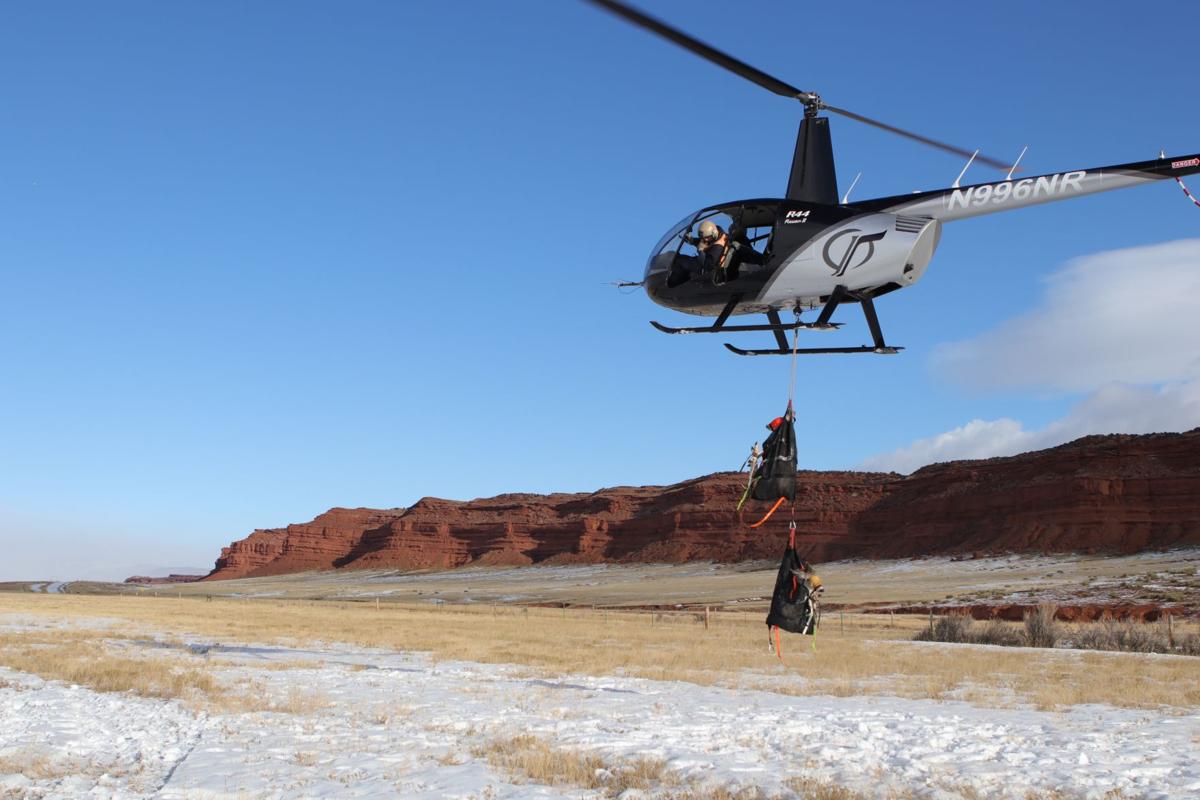 A helicopter from Native Range Capture Services, a wildlife capture service based in Elko, Nevada, gently places two mule deer into the drop area. Each chopper is manned by a pilot, a “gunner” to fire the net gun and a “mugger” who blindfolds, hobbles and secures the deer safely to the harness. 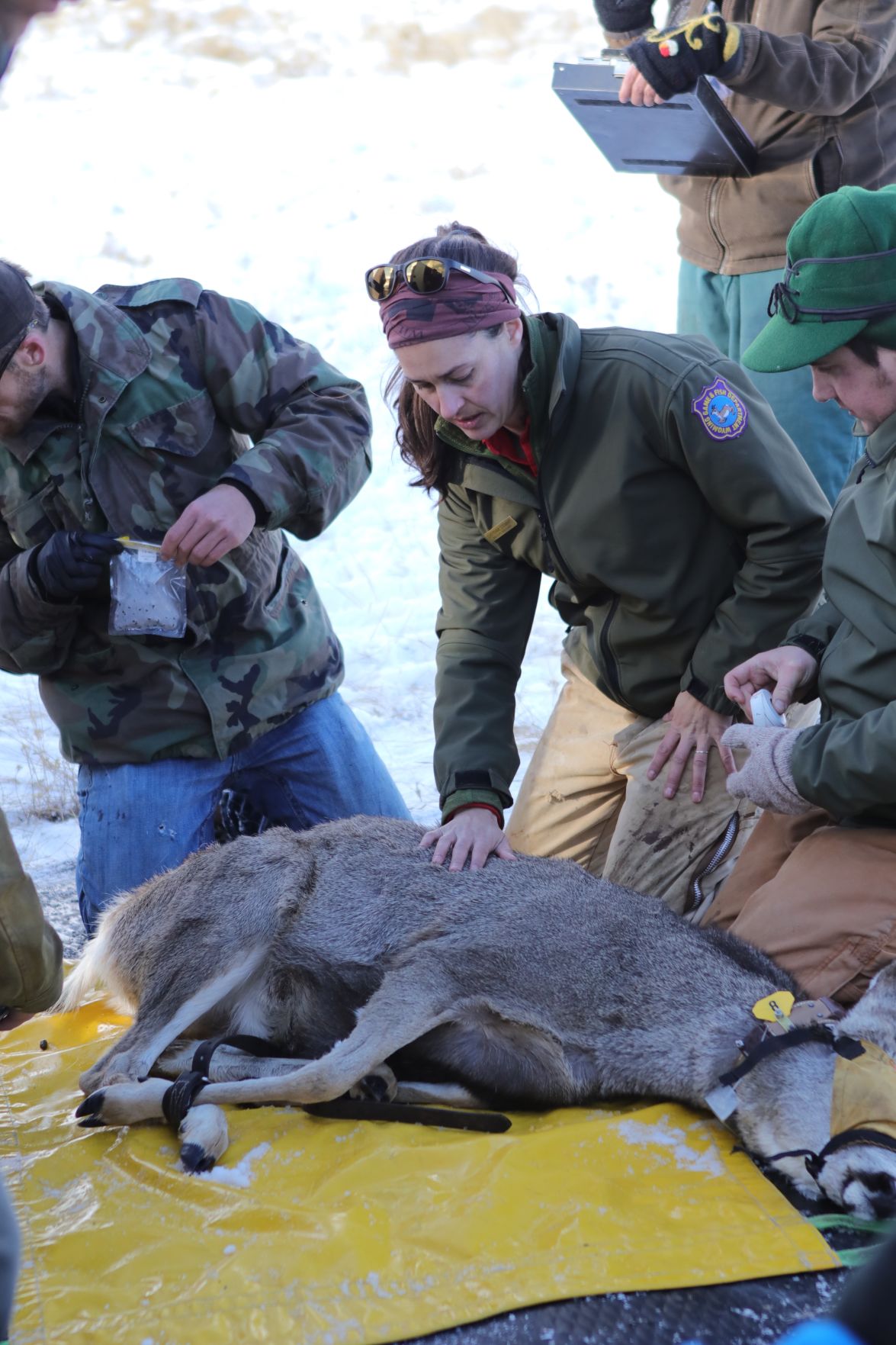 While BLM biologist Wyatt Wittkop (left) takes a sample, Game and Fish biologist Cheyenne Stewart assesses body fat of a newly captured mule deer. Although too early to identify the cause of the low body fat composition, Stewart theorizes it may be caused by Chronic Wasting Disease.

Before most of the world was awake, a team of biologists and volunteers gathered on Dec. 13 at the Sinclair gas station in Kaycee. The team’s mission was to collect ultrasound data to estimate the body fat percentage of each radio-collared deer and gather blood and fecal samples.

The team, made up of game wardens, biologists and volunteers from the Wyoming Game and Fish Department, the University of Wyoming, the Bureau of Land Management and the Clear Creek Conservation District, was participating in an ongoing study of the health of the Upper Powder River mule deer herd and the unit’s birthing, feeding and migrating conditions.

“Last year we deployed 70 radio collars,” Game and Fish wildlife biologist Cheyenne Stewart said. “We have 52 of those still out on live deer. So the goal is to recatch those deer and to collect biological samples, but the key thing is to do ultrasounds to look at body condition.”

The team on the ground was assisted by a helicopter team from Native Range Capture Services, a wildlife capture service based in Elko, Nevada.

According to Stewart, after locating the herd, the pilot used the chopper to isolate previously collared deer. Once the animal was in their sights, the gunner fired the net gun. The net snared the deer that was then hobbled and blindfolded by another team member, called a “mugger,” to reduce stress and possible injury to the deer. The mugger attached a harness and then secured the deer to the underside of the chopper. The deer was then transported to the team on the ground.

The ground team collected blood and fecal samples, which will be used for genetic testing and bank storage.

“Part of this is to bank all of the data,” Stewart said. “So that will get saved in case there are future questions that we want to get answered.”

As each deer was sampled, it was monitored to ensure that the stress of the event did not raise its body temperature to dangerous levels.

Kevin Monteith took ultrasounds of each animal to look at the body fat on their rumps. The rump is a much-needed body fat store that will carry the animals through the winter. Monteith is a University of Wyoming assistant professor of natural resource science.

Researchers are also studying the relative health of the does heading into winter. Typically, deer forage on nutritionally rich foods in the spring and summer, which sustains them while lactating and holds them over through the winter when only lower-quality food is available. Game and Fish biologists expected the doe deer to come into winter in good body condition, but were surprised when the captured deer were in fairly poor condition in December 2018, Stewart said.

As the team removed each collar of the captured deer, Stewart downloaded the information onto her field computer and then placed the collar back onto the deer.

“These collars will continue to gather data,” Stewart said. “But now I have a third of the project data, in terms of movement, downloaded.”

“Deer were expected to be in better condition than they were, given the excellent spring and summer precipitation,” Stewart said. “We are concerned that poor nutritional condition is affecting fawn productivity and survival which is vital to a herd sustaining at a given level or increasing in number.”

Six collars were placed on new deer in February while the Native Range flight team was on another assignment in the same area, Stewart said.

The recapture and redeployment of the remaining collars was finished with only a few deer running onto private land the Game and Fish had not gotten permission to go into, according to Stewart.

But support from private landowners has largely been positive, Stewart said.

“It’s incredible, the amount of cooperation we have had from landowners,” Stewart said.

Stewart will compile the data she and her team gathered, but it will be sometime before she can analyze the information to identify any trends, she said.

“Right now we can look at the difference for nutritional conditions using the ultrasound data,” Stewart said. “But you don’t want to analyze too much before you have all the data or you could interpret it incorrectly because you don’t have all of it.”

Do you think the Legislature should give the state the authority to purchase a million acres of land owned by Occidental Petroleum Corporation in southern Wyoming.