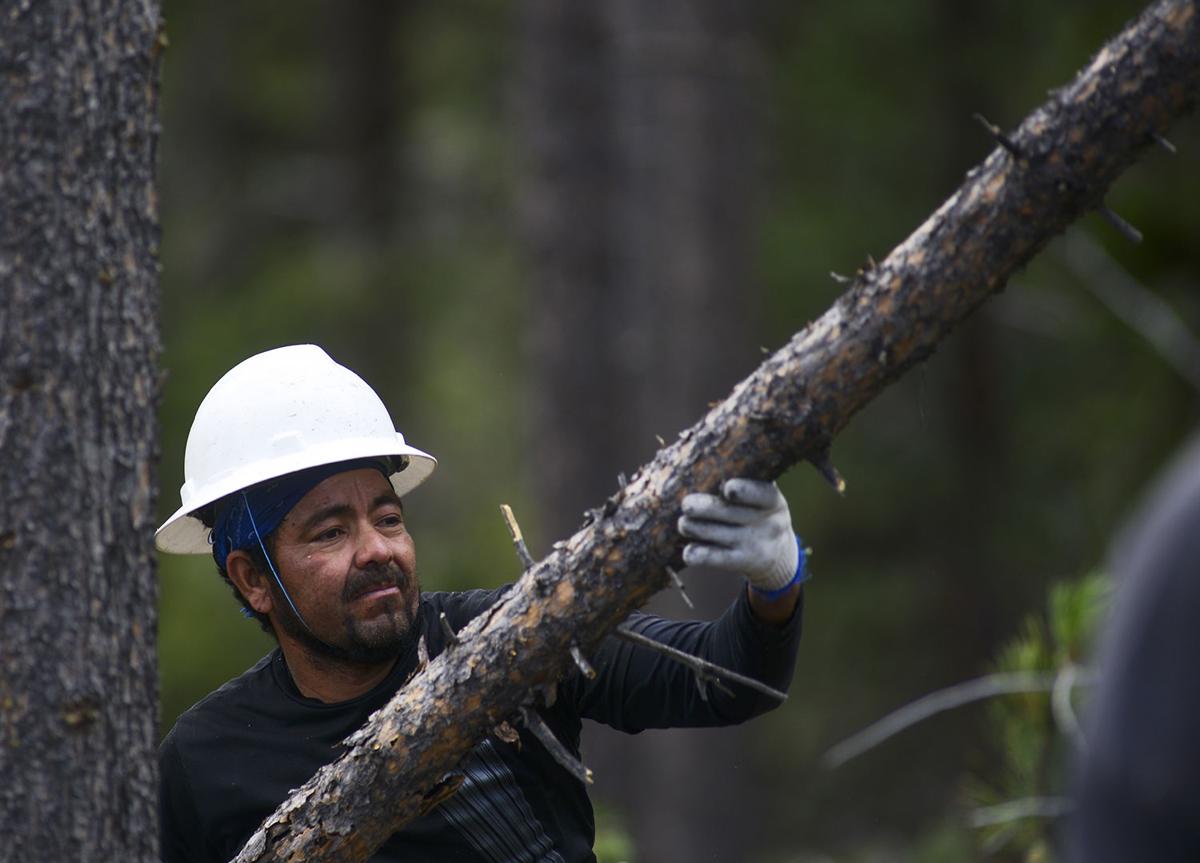 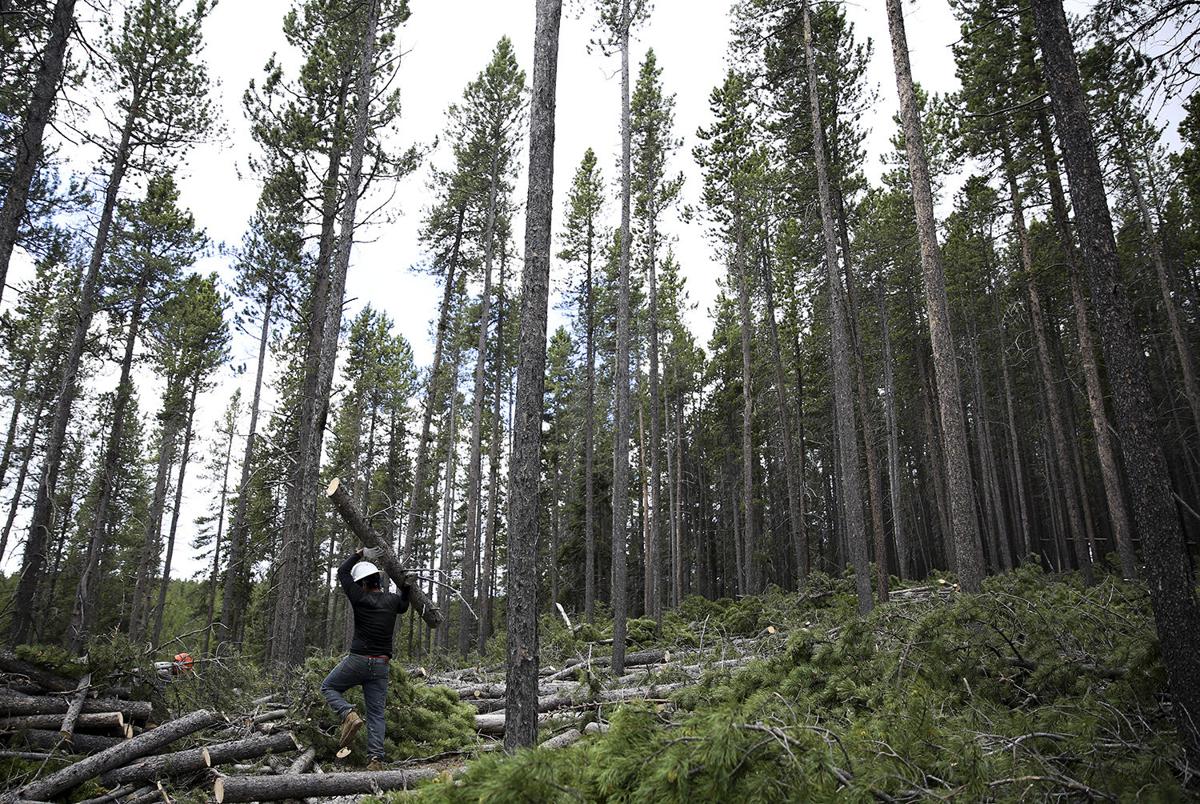 Thinning timber in the national forest is one preventative way in which the Forest Service is able to protect the ecosystem and hopefully prevent wildfires from spreading quickly if one were to start. They trees are cleared with roughly a 15 ft. distance between each tree. This helps to protect against crown fires where the fire would hop between the crowns, or tops, of the trees in the canopy. 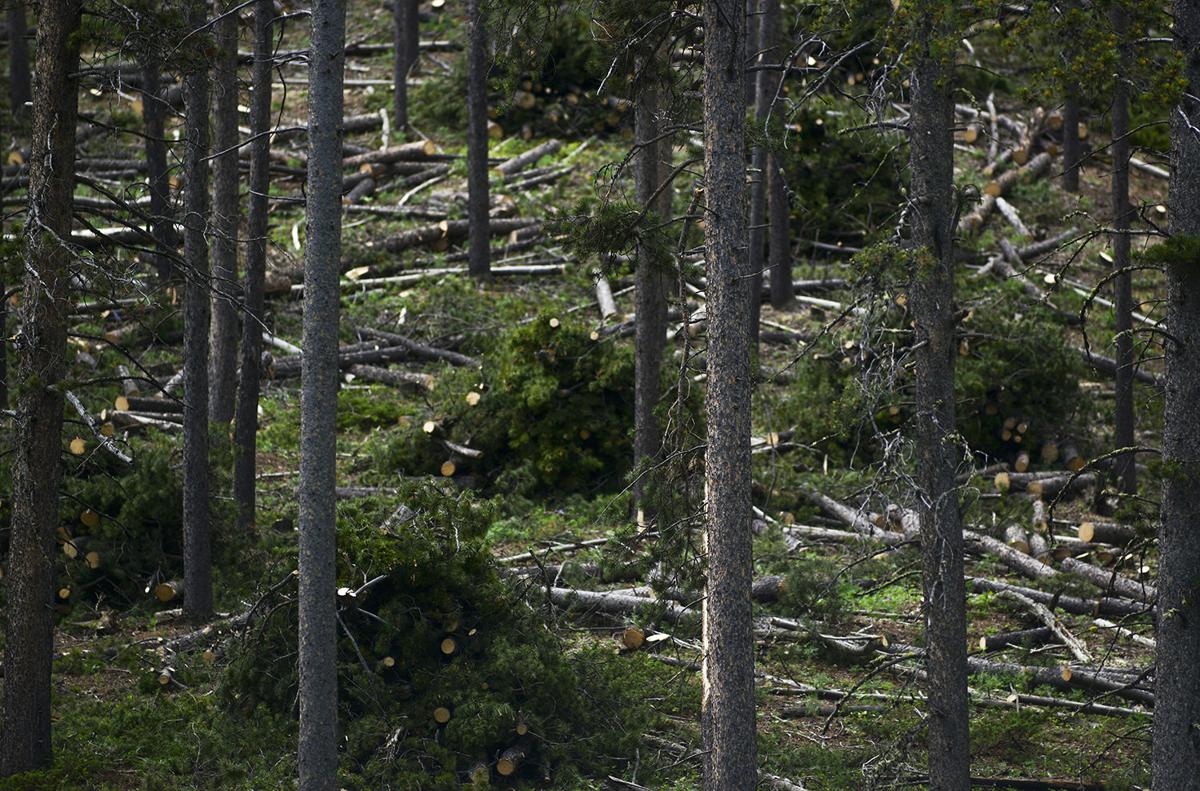 Logs and branches are stacked into piles that will be burned ultimately, but only after sitting on the ground for a specified period of time. The Forest Service can only burn the piles in the winter when there is snow cover to prevent the intentionally started fires from spreading. 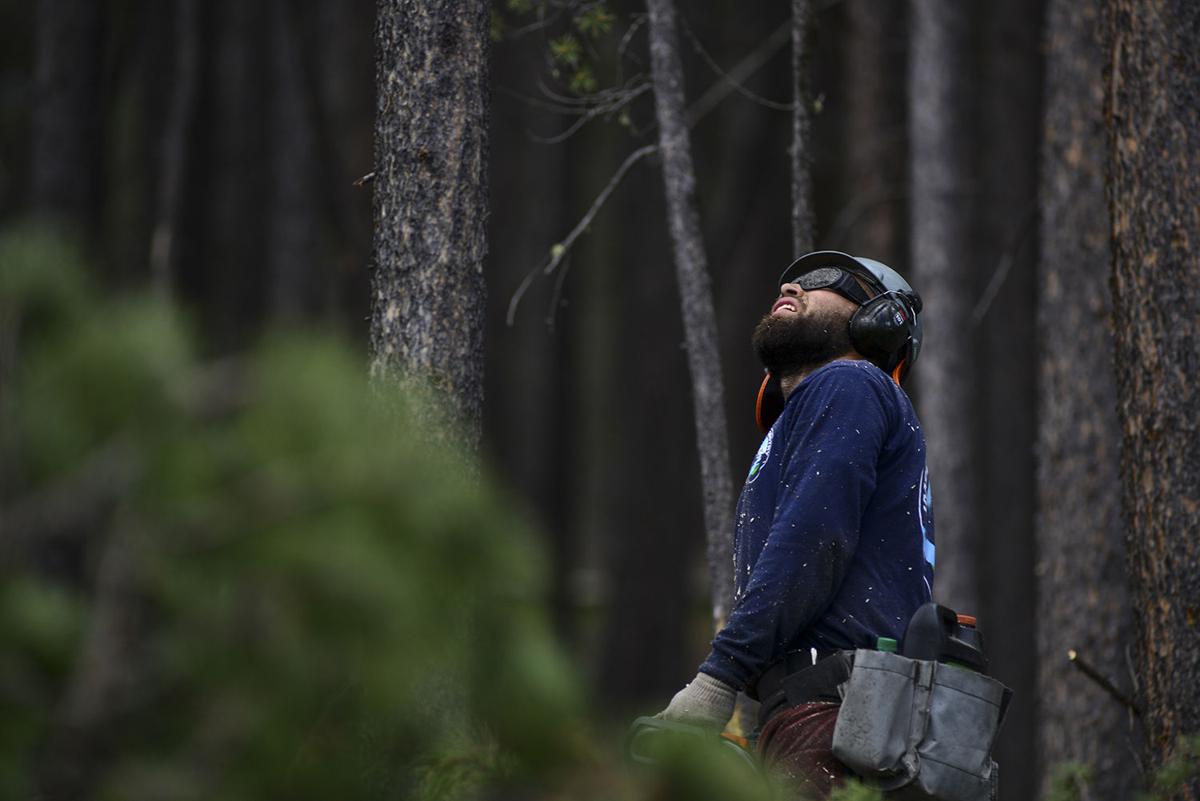 Luis Rodriguez looks up the check the top of the tree before continuing to saw down the trees that are being thinned on Friday. The team spreads out with a handful running chainsaws to cut down trees and split the logs to manageable sizes, and the others slacking up the logs and branches into piles. 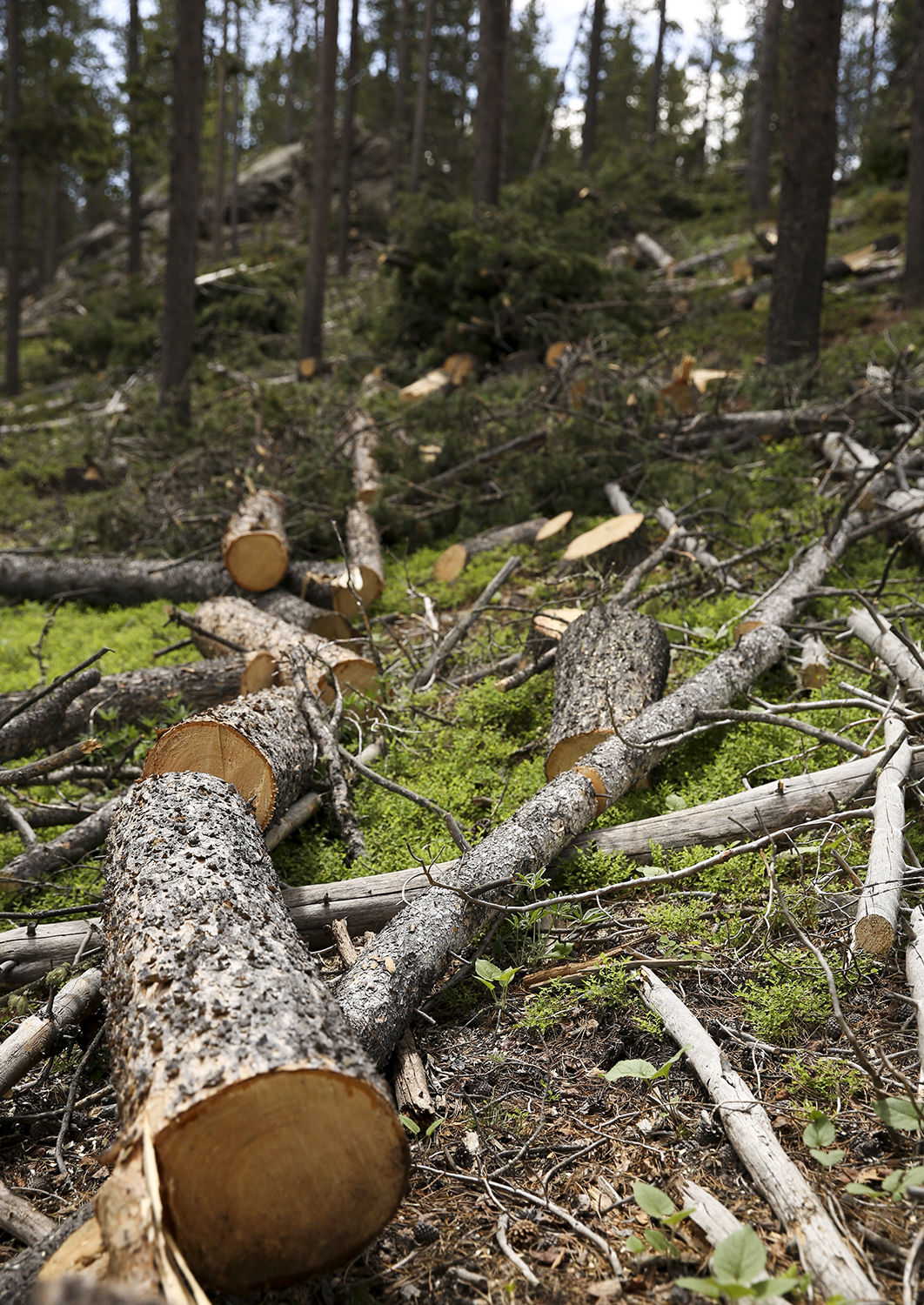 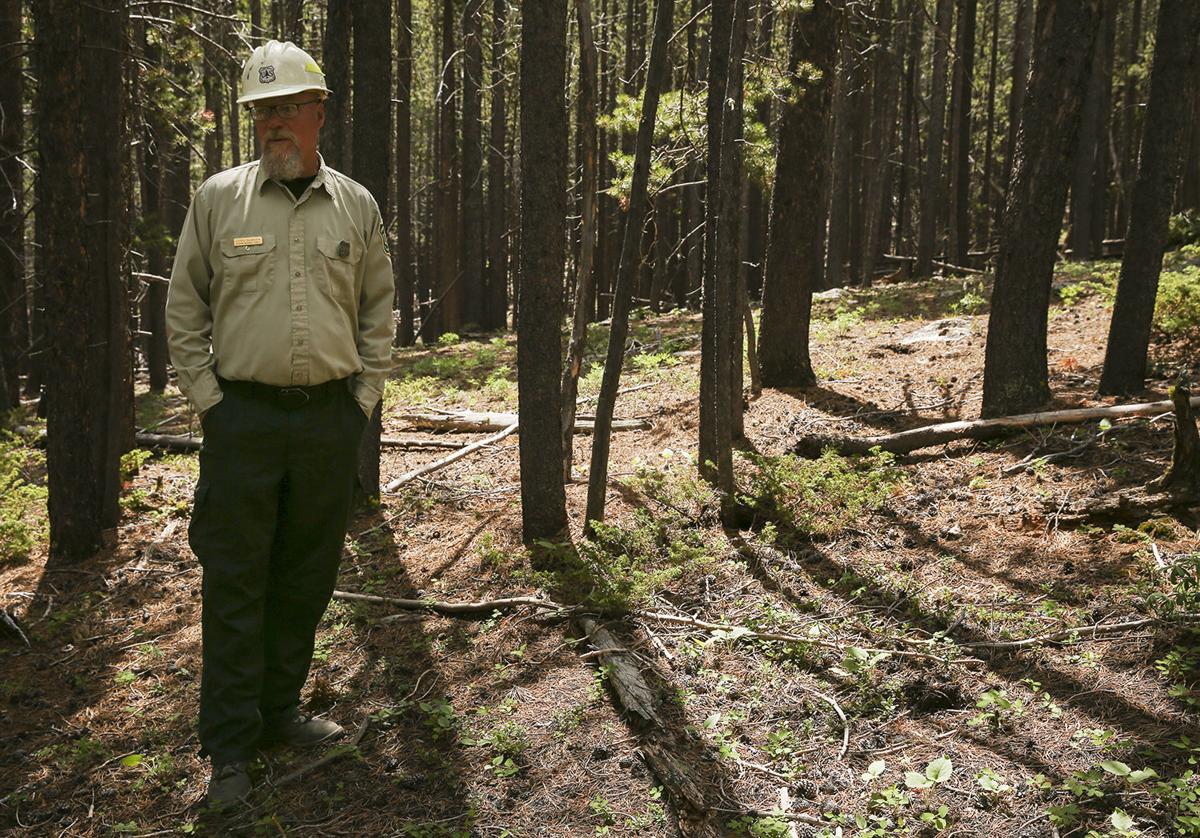 Curtis Rasmuson stops to talk about the value of thinning the forest and to check the map that he had on his cell phone of the area that is being thinned. Rasmuson is the District Fire Management Officer based in the Power River Forest Service Dept. headquartered here in Buffalo. He oversees the seasonal fire team. 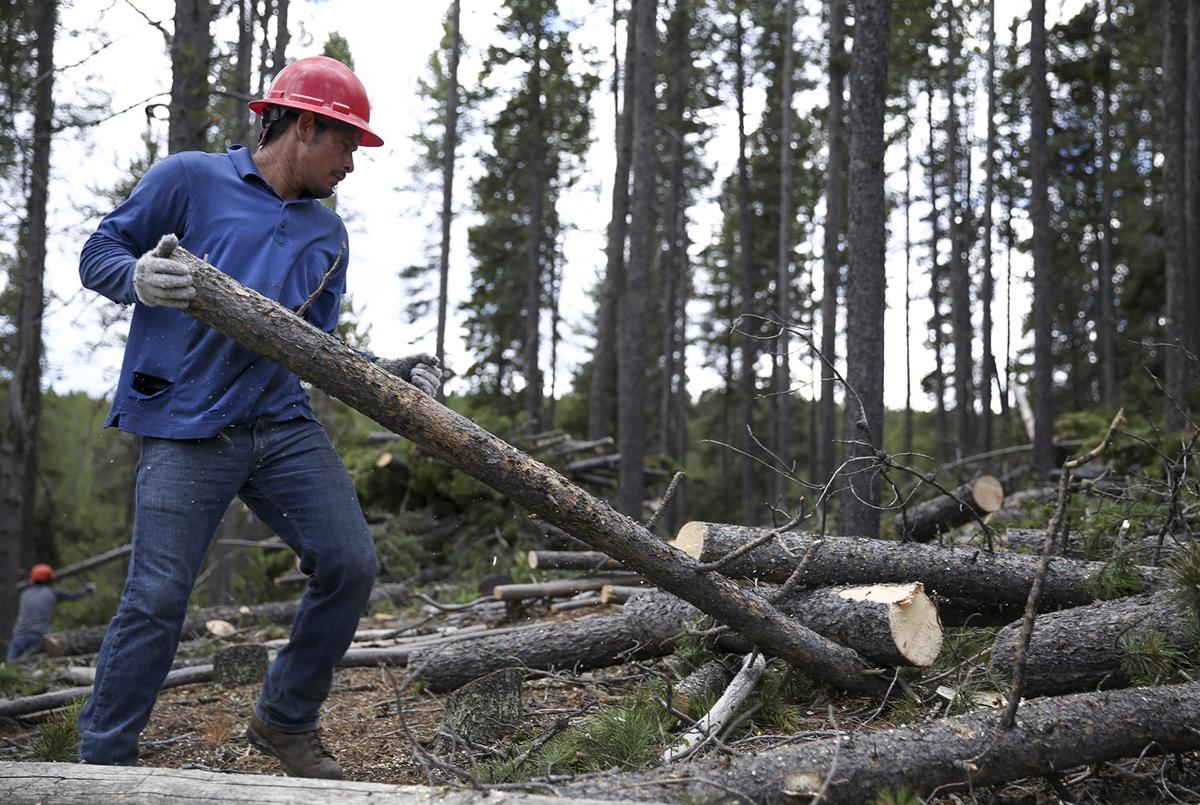 Jorge Montes moves logs around while building piles in the national forest on Friday, June 20, 2020. The contract crew started working on the thinning project on Monday, June 15.

Watt’s land was part of the 2012 Cato fire, which burned through 28,000 acres in Johnson and Sheridan counties.

That same year, the Gilead Fire burned more than 8,000 acres of forest northwest of Buffalo. Now, when local experts talk about the hot, dry start to the summer of 2020, they all mention one thing: It feels a bit like 2012.

“The last couple years (fire season) didn’t show up until the end of July or August,” said Kelly Norris, Wyoming State District 5 Forester. “Right now across the state, we’ve had multiple fires get away and go into extended attack.”

It took two weeks for the entire northeast corner of Wyoming to slip from “abnormally dry” to “moderate drought,” according to the June 16 U.S. Drought Monitor report. The long-term outlook from the National Oceanic and Atmospheric Administration forecasts dry conditions and above-average temperatures through September.

May is typically the wettest month for Johnson County, accounting for about a quarter of the annual average rainfall. This year, May tracked more like the average July.

It is hard to draw broad conclusions from historical precipitation statistics. The figures are mathematical averages, a narrow view of widely dispersed single-year observations. Outliers, however, are still apparent: To date, this is the driest year since 2008.

A 2016 analysis from the University of Wyoming shows a strong correlation between years with low precipitation and those with high fire activity. When one goes down, the other goes immediately, sharply up.

But the real trouble comes, the research found, when a dry year follows a string of wet years. That was the model for the Cato fire. One thing Watt remembers: 2011 was a fantastic year for grass. Leading into this year, she said, grass levels were more average.

The past week has been cooler, and a few local rainstorms over the weekend. Still, that’s not enough to change the fire season’s trajectory, according to Jennifer Walker, a fire ecologist at the Bureau of Land Management’s Buffalo Field Office.

Fine grasses are known as “one hour” fuels, she explained. It takes just 60 minutes for them to dry out again. “Now, if the soil moisture improved, that would increase humidity at the fine fuels level,” Walker said. “At this point, it would take quite a bit of rain to improve soil moisture and cause a fresh batch of green to grow.”

From far away, the chainsaws sound like a giant hive of bees.

A 20-person contract crew is thinning trees in the Bighorn Mountains. It will take them about two weeks to move through the 111-acre area east of Elgin Park, a part of the Buffalo Municipal Watershed project.

They’re aiming for 20 feet of spacing between the trees, to reduce fire risk and promote forest health.

That demands a lot of work. In areas of the section that the crew hasn’t reached, you could stand still and touch two to three thin trunks without even fully extending your arms.

The crew is efficient: Each tree plops off its base. Releases a halo of pollen. Pauses, then topples to the ground. Crew members will tell you that they can pile the logs from a felled pine in about five minutes.

Thinning helps mitigate fire, but only if you plan ahead. Timber brought down in this project could take a year to dry. Then the piles will be burned in winter, once snow covers the landscape.

Driving to the site, Curtis Rasmuson, district fire management officer for the U.S. Forest Service, points out nearby clear-cuts, their wood sold in timber sales. Those areas are chosen strategically to act as firebreaks and provide access for wildland firefighting crews.

Buffalo’s 10-person firefighting crew is returning this week from Colorado’s San Juan mountains. Crews often move to areas within the region where fire indices are the highest, but U.S. Forest Service District Ranger Traci Weaver says they will probably keep the crew closer for now.

Three days after the Reno Road fire began, a coalition of crews from the state, the Bureau of Land Management, the U.S. Forest Service and at least four counties had fully contained the flames. Still, its sudden appearance was enough to spur the Johnson County commissioners to place state and privately owned lands under a partial fire ban.

The BLM followed quickly with similar restrictions for bureau-managed lands in the county.

Those measures can cut down on human-caused starts, but the top concern mentioned by Johnson County experts is the spark no one can control: lightning.

“We tend to get these lightning belts, especially up on the border of Wyoming and Montana, and then also again, down here off the Bighorns,” Norris said. “And when you get multiple starts, it’s hard to contain them all.”

“That’s what scares me the most, because there isn’t anything else you can do,” Watt said. Eight years in, there is still no sagebrush on the areas of her property that burned.

“I don’t ever want to live through that again,” she said. She recalled driving across her property after Cato. For a moment, she couldn’t find her way home. Across the charred land, familiar landmarks had been obliterated, new rocks uncovered. It looked, she said, like a crater on the moon.

Where homes and outbuildings butt up against forest or prairie, landowners can clear nearby brush or trees, trim overhanging branches and remove flammable mulch or vegetation to reduce the risk of a structure fire. It’s more challenging to protect thousands of acres of vulnerable grassland.

If there hasn’t been a lot of grazing, Walker said, when that dry year comes, “all that cured material is sitting out there as fuel.”

“A lot of folks, when they get worried, they’ll maybe graze down certain pastures if it’s looking like a bad fire season,” she added. Strategic grazing creates fuel breaks, which can slow fast-moving flames.

Once that’s done? “You just hope for the best,” Watt said.

Norris identified four factors that contribute to the scale and spread of a wildfire. Recent rainfall matters, but wind, levels of ground fuels and the amount of moisture in the air also contribute.

“(When) the Reno fire really took off, we had very high winds,” she said. “It was what we call the twilight hours – from, like, two to four in the afternoon – when your relative humidity just really drops.”

Higher elevations typically dry out later in the year. There aren’t Forest Service fire restrictions in the Bighorns yet, but Weaver says fire indices from remote weather monitoring stations are “running close to, or at, historic highs right now.”

The indices are based on estimated levels of flammable, dead fuels in the area, Rasmuson said. Something as small as a change in relative humidity, or the cooler weather over the past week, can reduce the danger level for twigs or brush. Downed logs and larger limbs require more.

“In a drought year, even live fuel moistures can be low and that can contribute to how things burn,” Walker said.

“On-and-off rain, cloud cover, higher humidity, all those things are going to slow that steady rise of the fire indices,” Weaver said. “But in order to mitigate it, what we would need is a few days of that steady rain – and then to have that return periodically, not just once.”

Drought is not the only challenge for the 2020 fire season in northeastern Wyoming. Social distancing measures designed to prevent the spread of the novel coronavirus will impact who is available to work fires and how those resources can be deployed.

This year, those crews won’t be activated, because when it comes to COVID-19, inmates, who live in communal settings where social distancing is more challenging, are a high-risk population.

Crew constraints led the state, in coordination with the BLM, to bring on two extra planes – called “seats” – to help with fire season this year, Norris said. Only two people are allowed in each vehicle, so they’ve added a State Forestry truck that can follow an engine to a fire.

If a fire rages out of control, firefighters from across the country and even the world will converge on the scene. They stay in fire camps, tent cities that house as many as 1,500 people, that “just spring up out on a pasture, or at a fairgrounds or something,” U.S. Forest Service District Ranger Traci Weaver said.

“Leaning over a pickup cab looking at a map and trying to figure things out is just common practice,” she added.

Those habits, she said, will have to change. Camps will be more dispersed, and crews will stay separate as much as possible. The locally-based Forest Service wildland fire crew will be less impacted because it is relatively small and self-sufficient and typically doesn’t use large fire camps.

Even as it challenges common working procedures, the threat of COVID-19 makes it even more important to attack fires quickly and keep them under control, according to Weaver.

“If we get a fire up here on the mountain, the likelihood of smoke impacts to Buffalo are there,” she said. “Since COVID is a respiratory disease, we certainly don’t want to negatively impact folks with that as well.”

Editor's note: This story has been edited from the print version to correct the time of day when humidity drops. The humidity drops in the afternoon, not in the early morning hours as published. The Bulletin regrets the error.

Mara Abbott joined the Bulletin as Report for America corp member in 2019. She covers energy and natural resources. Mara’s work has appeared in the Wall Street Journal, USA Today and Runner’s World.