You are the owner of this article.
Edit Article Add New Article
You have permission to edit this article.
Edit
Home
News
Sports
Profiles
Opinion
Classifieds
Obituaries
Contact Us
Subscribe
e-Edition
Photos
State
Covid-19
1 of 10 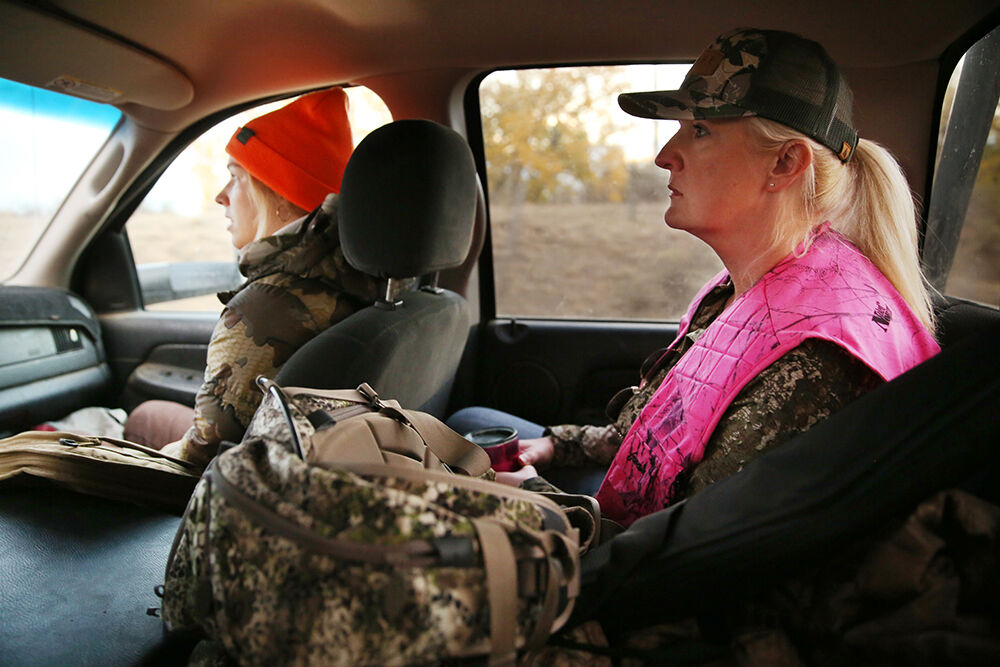 Susan Bates, right, and Tobey Schmidt were paired together to hunt in a small group with guide Matt Bowers on Friday. Bates works at Buffalo High School and Schmidt traveled from Lander to join the hunt. When asked why she decided to do the hunt, Bates said she wanted to educate herself further on the full process of hunting so she can pass that knowledge on to her son. 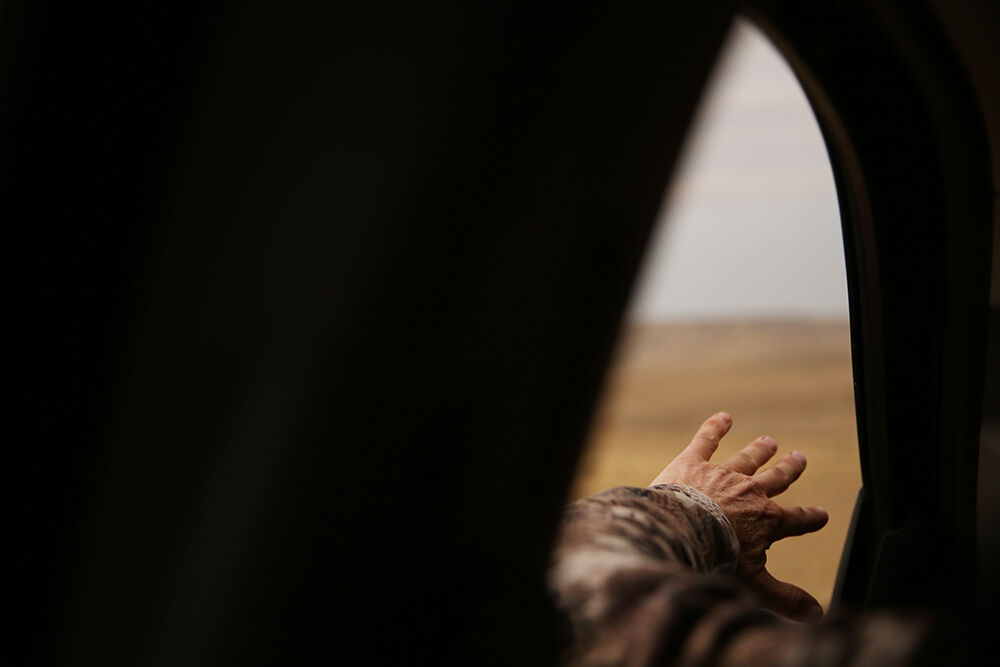 Matt Bowers waves his hand in the air as he describes the location of an antelope to spot with binoculars on Friday. The group split the morning searching for antelope from the car and stalking the animals to look for bucks. 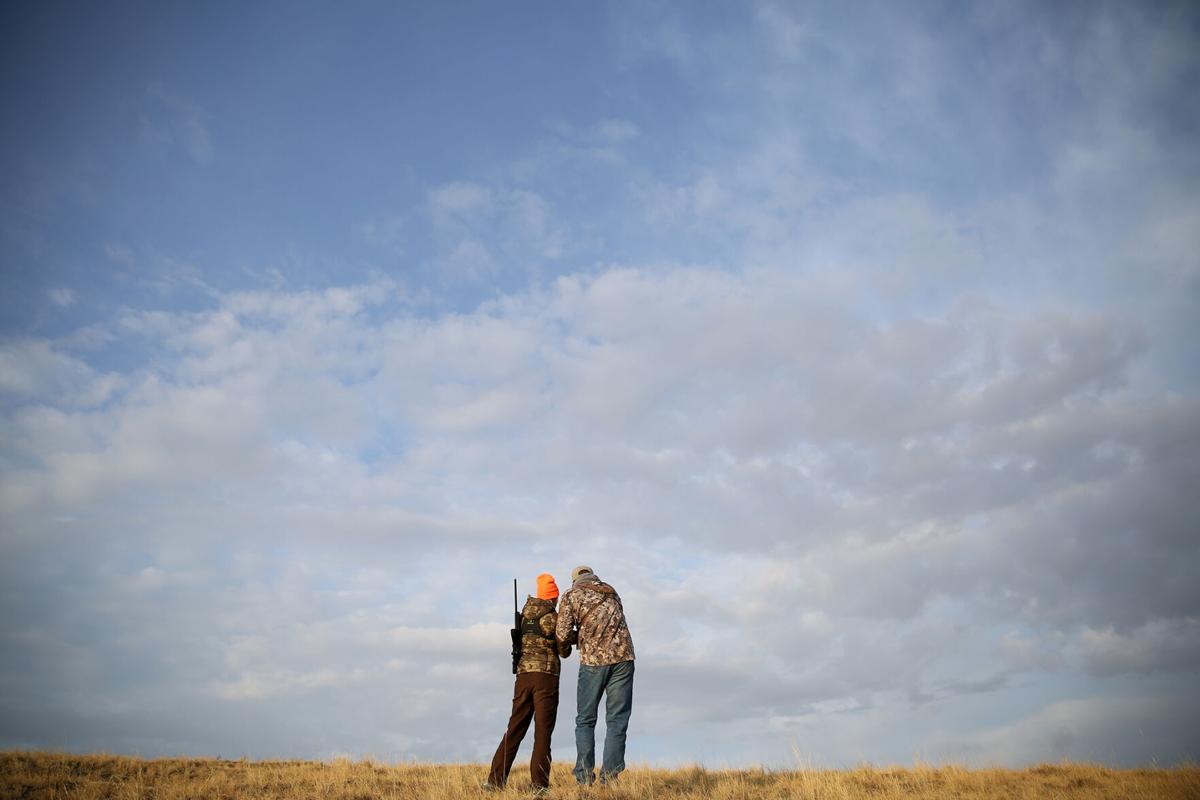 The annual Wyoming Women’s Antelope Hunt was held based out of The Ranch at Ucross for a long weekend ion October 7-10. The long weekend features a variety of activities including dinners and an auction as well as two days reserved for hunting in small groups with guides. 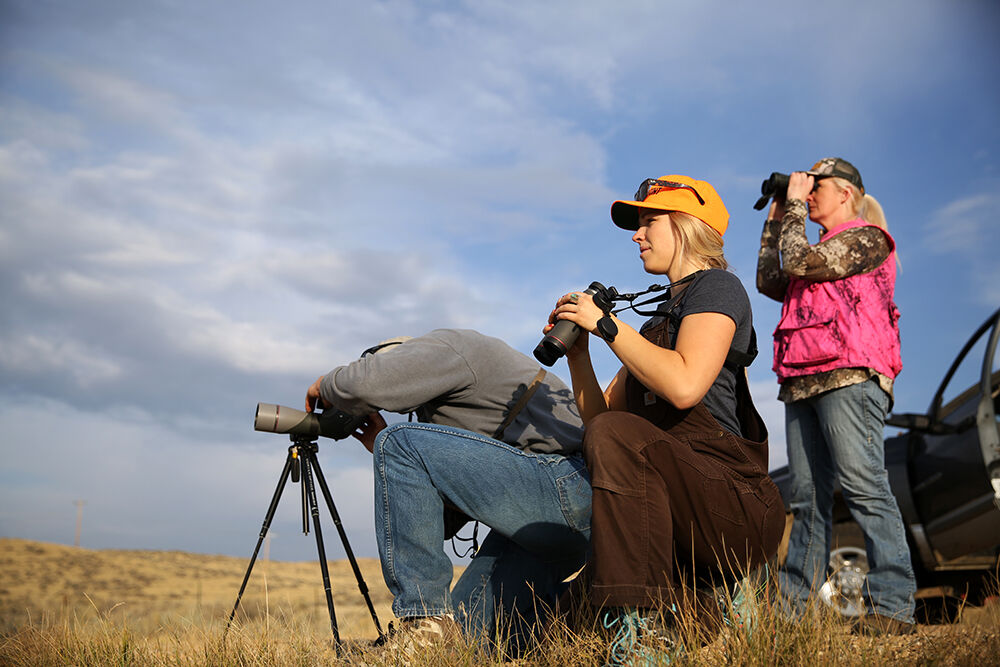 Guide Matt Bowers sets up a scope while hunters Tobey Schmidt, front, and Susan Bates use their binoculars to scan the ridgeline for wildlife on Friday. The group saw a variety of animals on the trip and stopped every so often to scan and search the landscape for antelope. The trio was participating in the 2021 Wyoming Women’s Antelope Hunt. 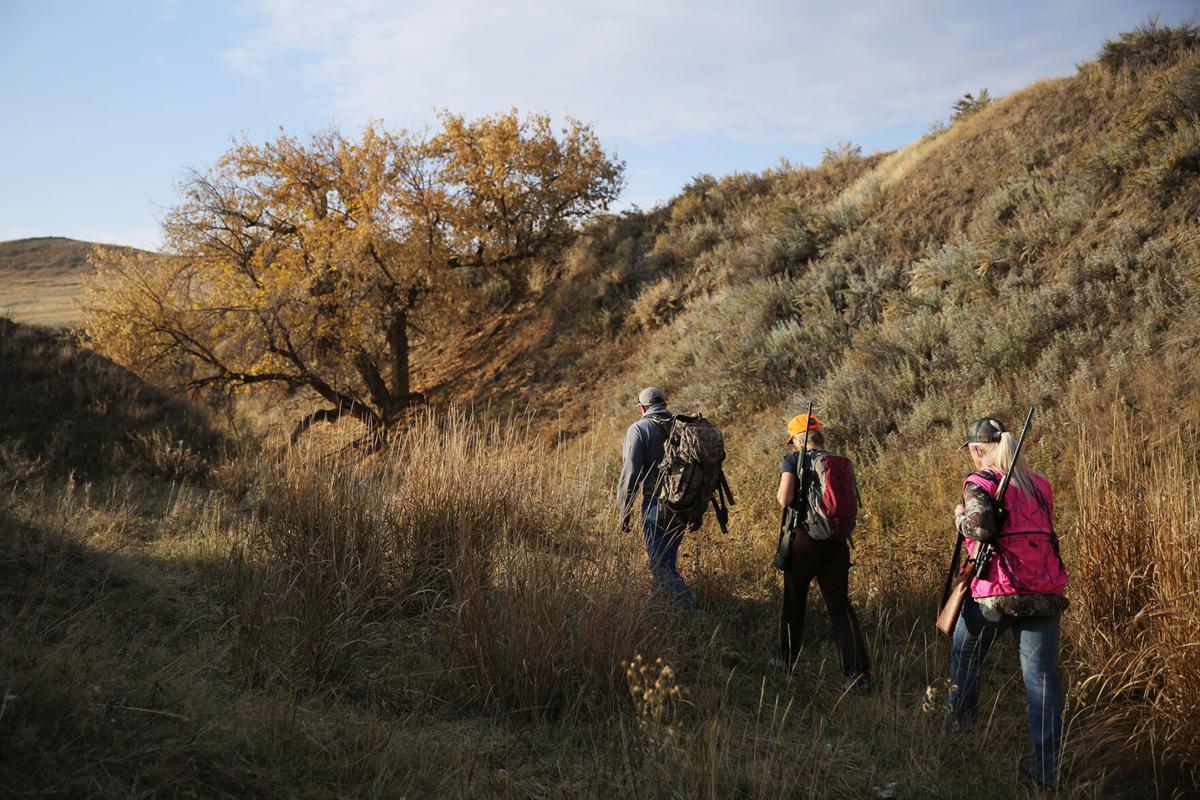 Guide Matt Bowers leads hunters Tobey Schmidt and Susan Bates up a ravine early Friday morning so as to stay out of eyesight of the antelope buck they spotted above on the flat. This was the second walking trip of the day. They would drive and search for antelope on the ranch and ultimately park and walk when they had spotted some. The event is set up as a two day hunt and both hunters had either sex tags. They decided on Friday they would look for bucks exclusively and on Saturday if they hadn’t yet filled their tag they would look for either bucks or does. 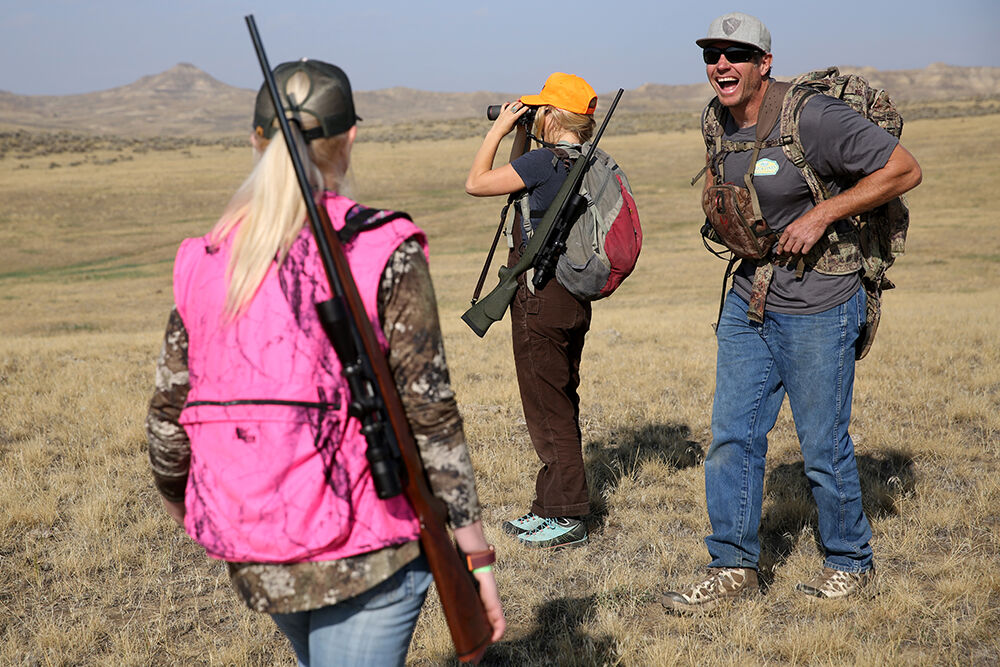 Guide Matt Bowers lets out a laugh after the group accidentally scared up the trio of does they had spotted from the road on Friday. Susan Bates, pink, spotted them first and froze but the antelope were already spooked and running. 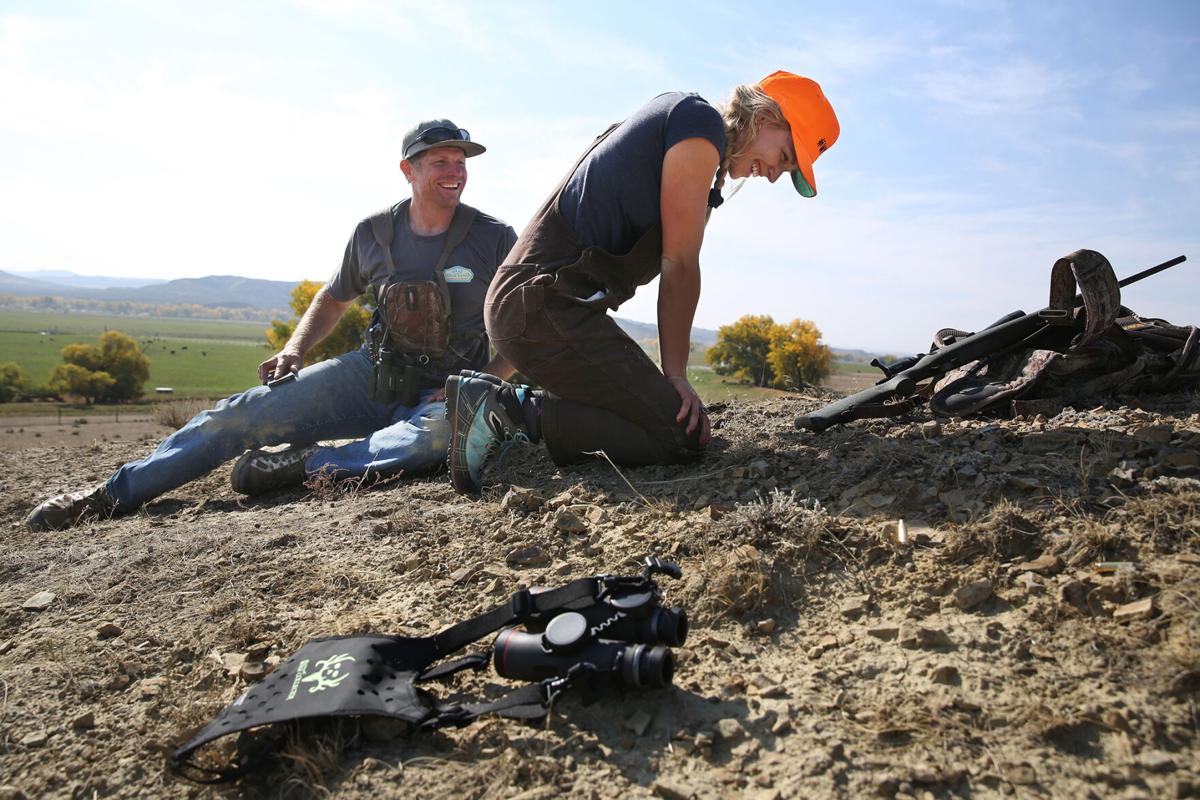 Tobey Schmidt sighs with a laugh after making the final shot to harvest her antelope. This was the first time Schmidt had harvested a big game animal, and she described the moment as a flood of emotions. 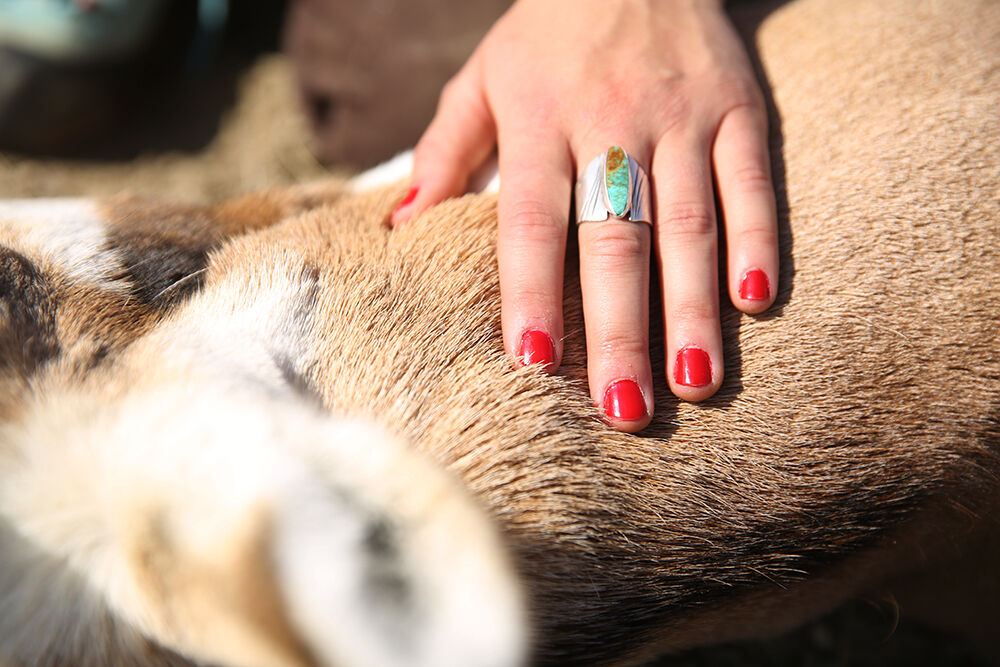 Tobey Schmidt runs her hands over the hair of her antelope buck. The first part of the Women’s Antelope Hunt includes lessons about the species and hunting. Antelope have hollow hair that is feels wirey, and so Tobey was running her hands on the neck to feel it. 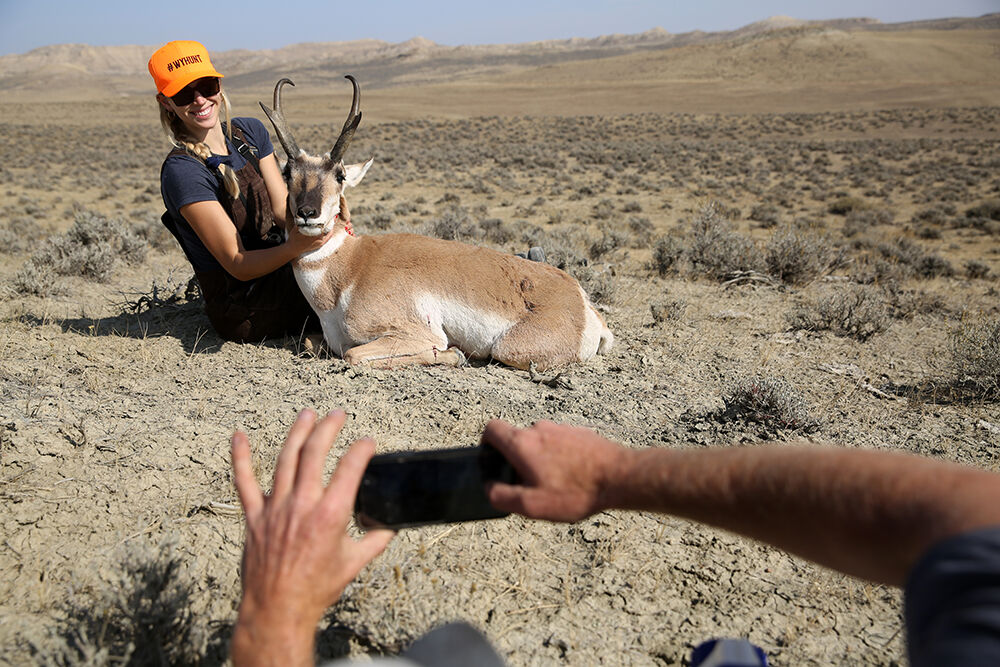 Tobey Schmidt posed with her buck on top of a hill near where she harvested the animal on Friday. Guide Matt Bowers joked that photos were his specialty when hunting and so they moved up to a better location and played the body out to improve photos. 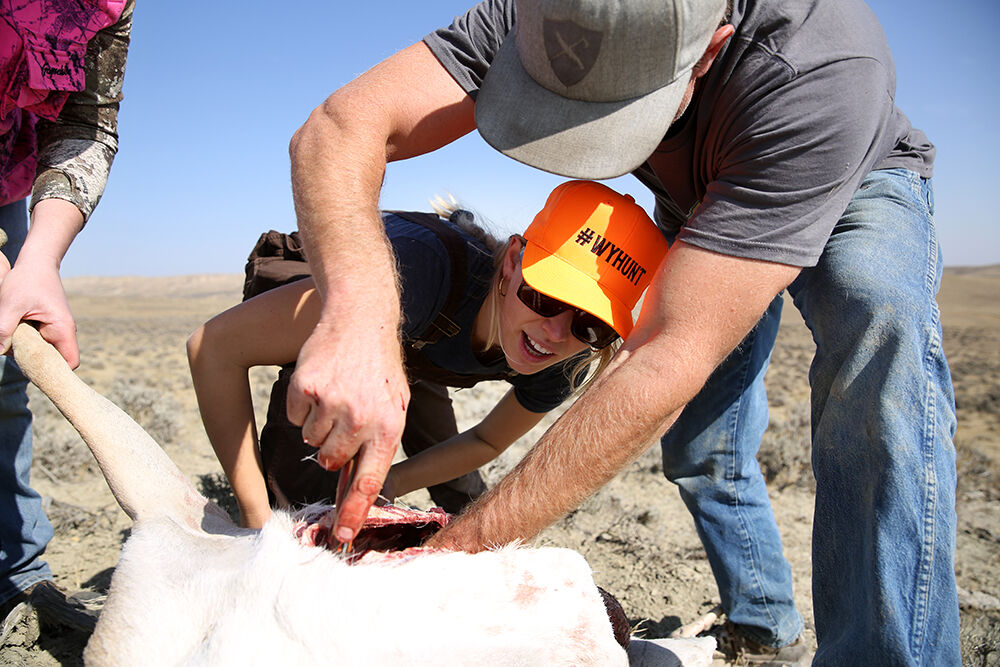 Buffalo resident Susan Bates holds the front legs of the antelope buck as Bowers explains to the pair how to gut the animal to lower the body temperature and prevent the meat from going bad. “I’m really into sustainable food and trying to source my meat especially as locally as possible and so hunting was really interesting to me,” Schmidt said of her decision to attend the weekend-long event.

Before the sun could rise over the eastern horizon Friday morning, hunters and guides were beginning to rustle around the main tent as preparations for the day began. Hunters joined up with their guides and hunting partners and slowly headed out in groups, staggering their departure times based on how far away they were hunting from the home base at the ranch at Ucross.

The annual Wyoming Women's Antelope Hunt kicked off on Thursday, Oct. 7 with welcome events, introductions and gun preparations for the hunt the next day. The hunt lasts for two days, allowing hunters two full days of opportunity to get an antelope. For Susan Bates, a Buffalo local, and Tobey Schmidt, Lander, were paired together with repeat guide Matt Bowers. Day one kicked off quick, stalking a few different sets of animals before Tobey was able to fill her tag - making it the first big game animal she had harvested herself. Bates harvested her antelope the following day before the hunting wrapped up making a successful weekend for both hunters.