You are the owner of this article.
Edit Article Add New Article
You have permission to edit this article.
Edit
Home
News
Sports
Profiles
Opinion
Classifieds
Obituaries
Contact Us
Subscribe
e-Edition
Photos
State
Covid-19
1 of 12 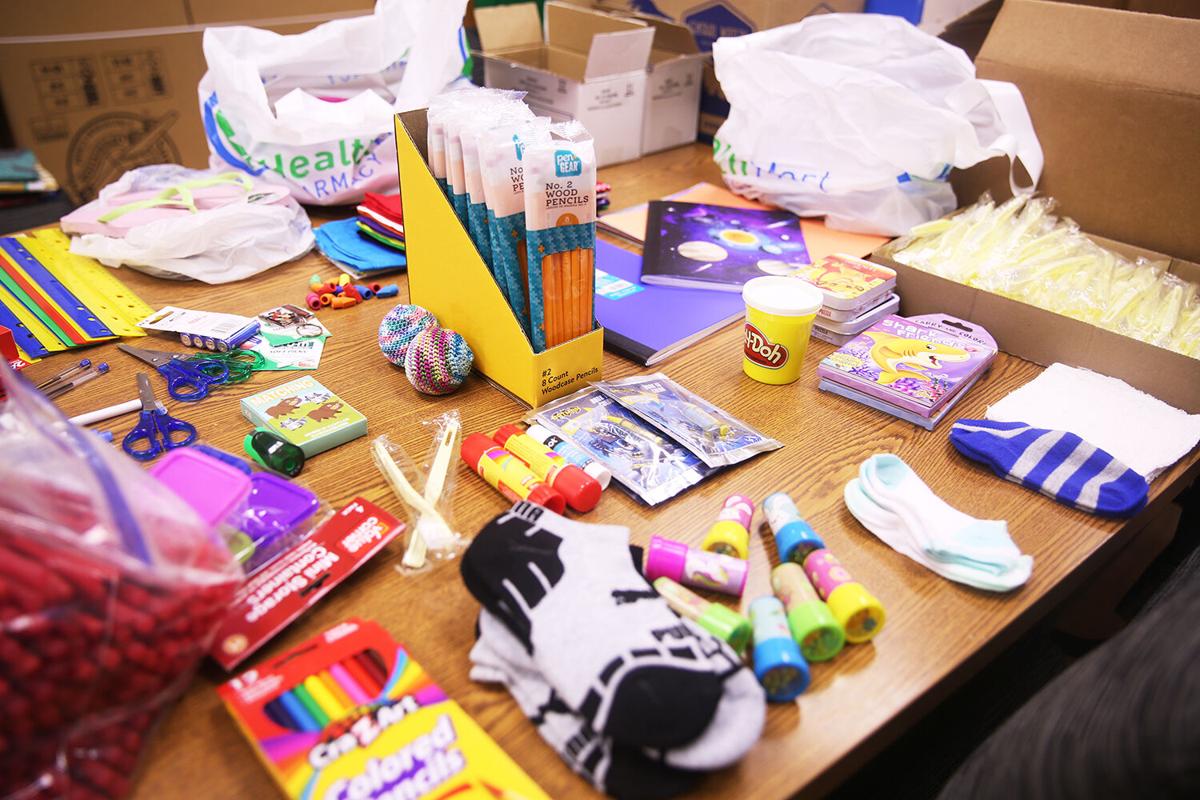 The packages that are dropped off are already packed full of goodies by those donating but extra goods are kept at the church in case they want to add anything extra to the boxes before sealing them. 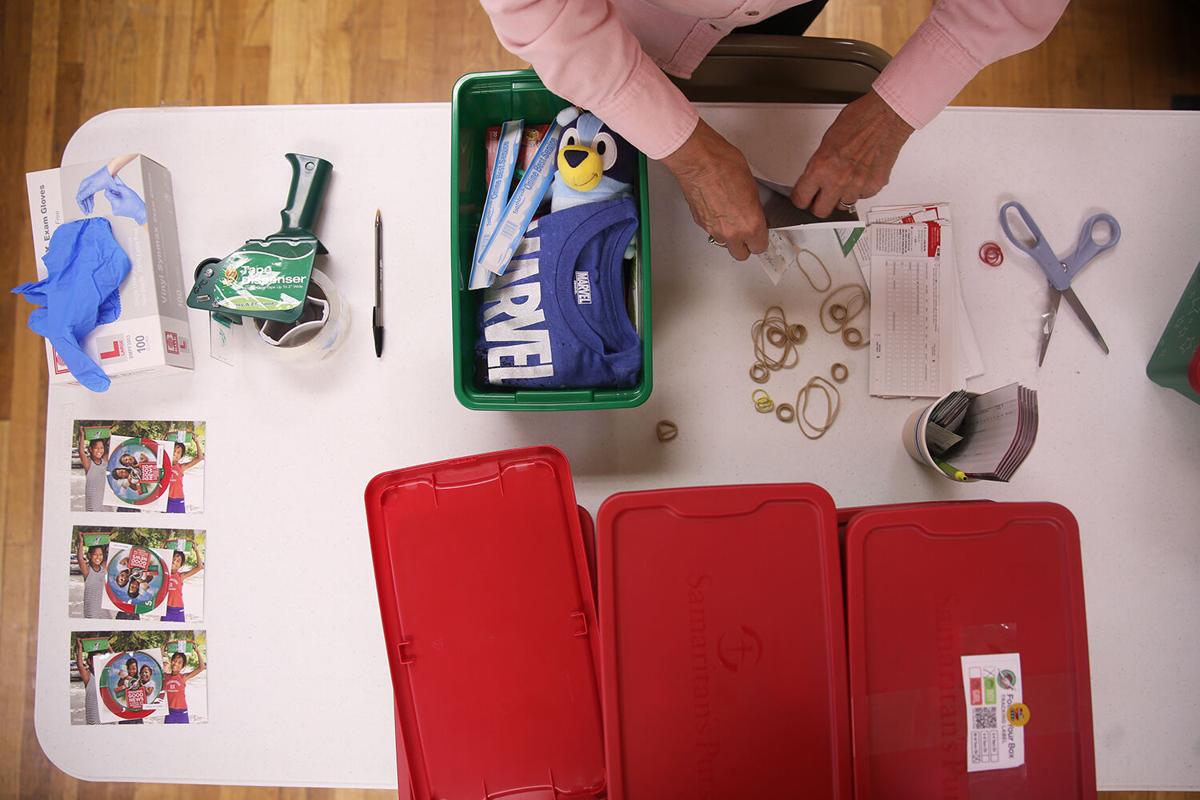 Each box is checked to make sure there aren’t any items that aren’t allowed and to make sure nothing extra should be added on Thursday. Any monetary donations are placed in an envelope that stays in the box before it is labeled boy or girl and sealed for packing in boxes. 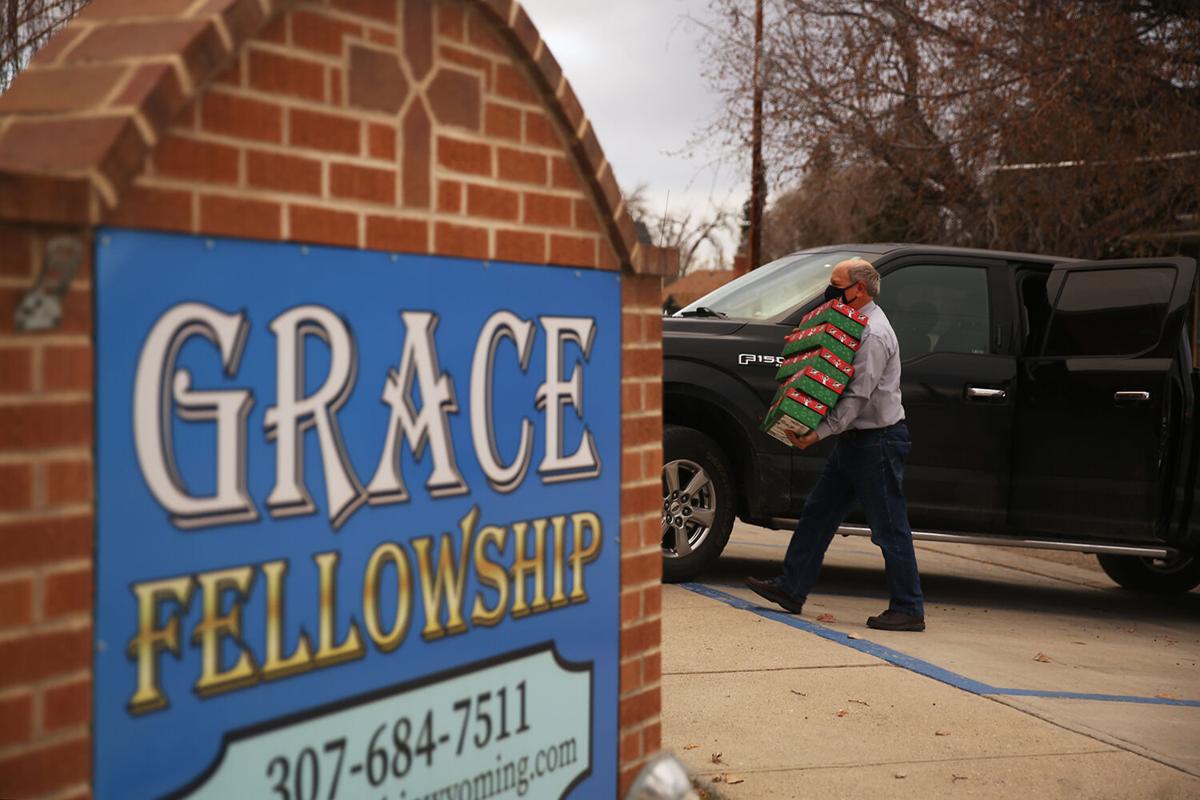 Richard Zander carries a stack of donated boxes in from the driver’s truck on Thursday. This set of 34 boxes were brought down from Story. 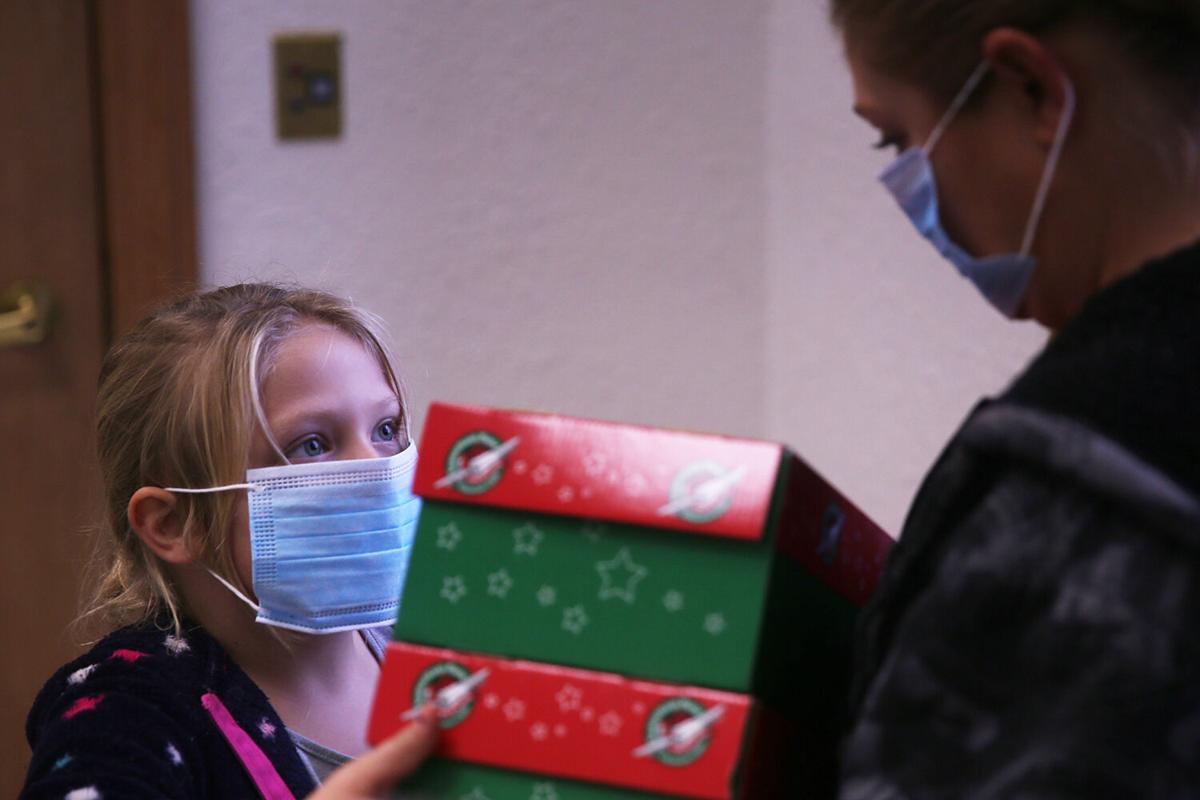 Natalie Roope, 6, grabs the boxes from her mom Shandra Hendricks after putting on her mask on Thursday. The pair came to drop off their boxes. Even though the church is closed right now because of COVID-19, the space was being used to complete the gift collection and packing process. 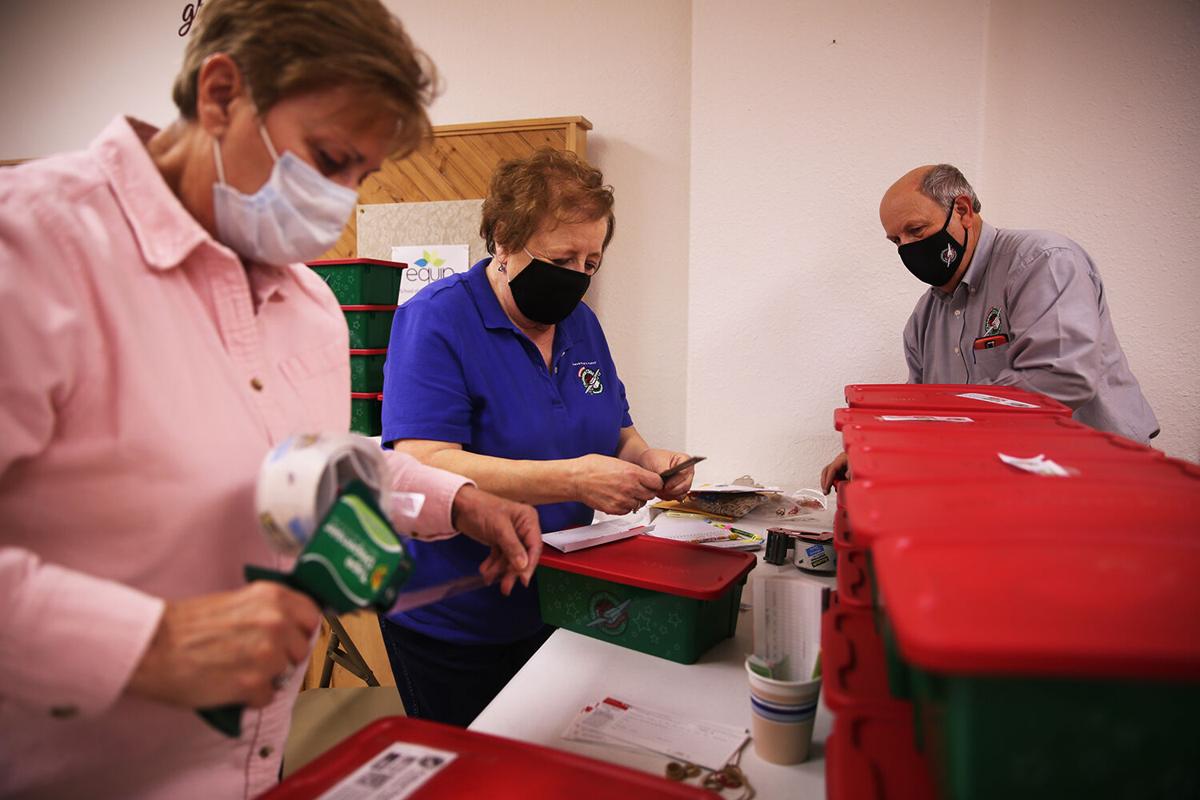 From left, Linda Mischke, Madonna Zander and Richard Zander check boxes that have been dropped off as part of Operation Christmas Child on Thursday at Grace Fellowship Church. Madonna, center, is the drop off location team leader, and all three worked every day of collection week to count, check and pack the boxes as they arrived. 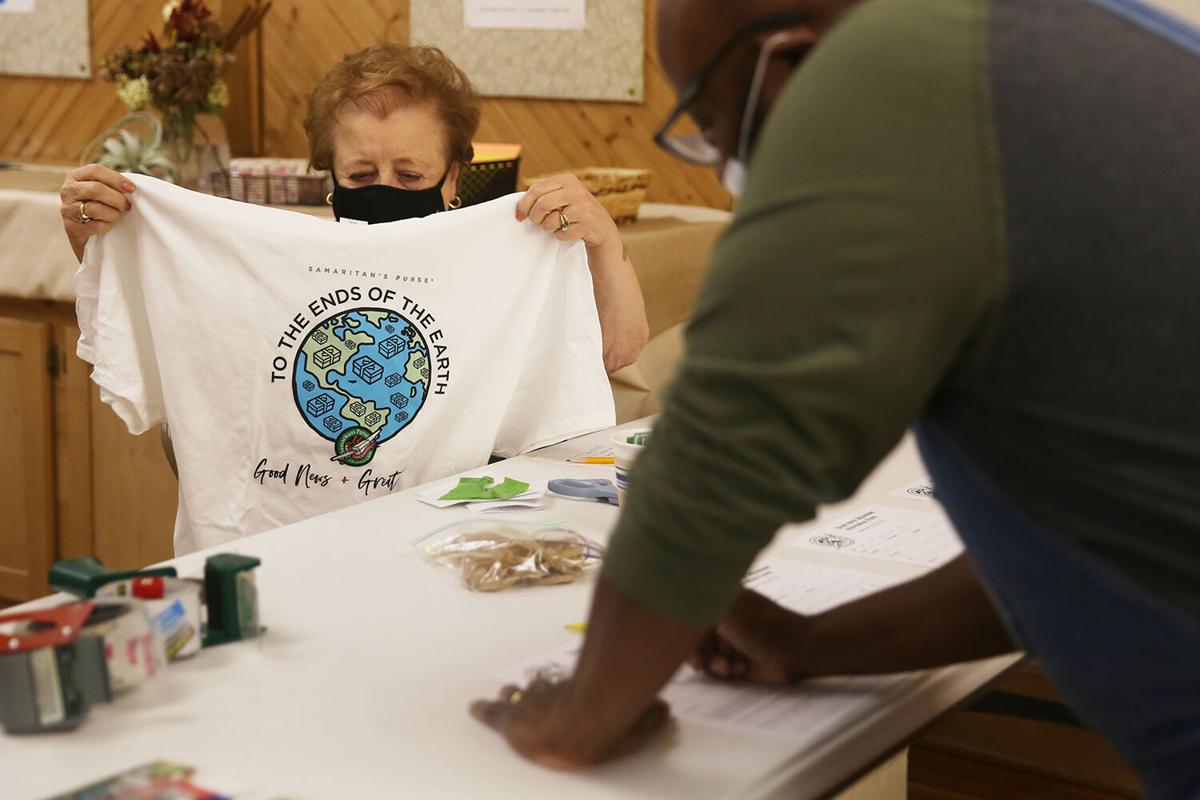 Madonna Zander finds the right sized shirt for volunteer Gabryl Lewis as he fills out the volunteer form on Monday, at Grace Fellowship Church. Each year shirts are made up by Samaritan’s Purse for volunteers - this year’s design features packages all over the globe. 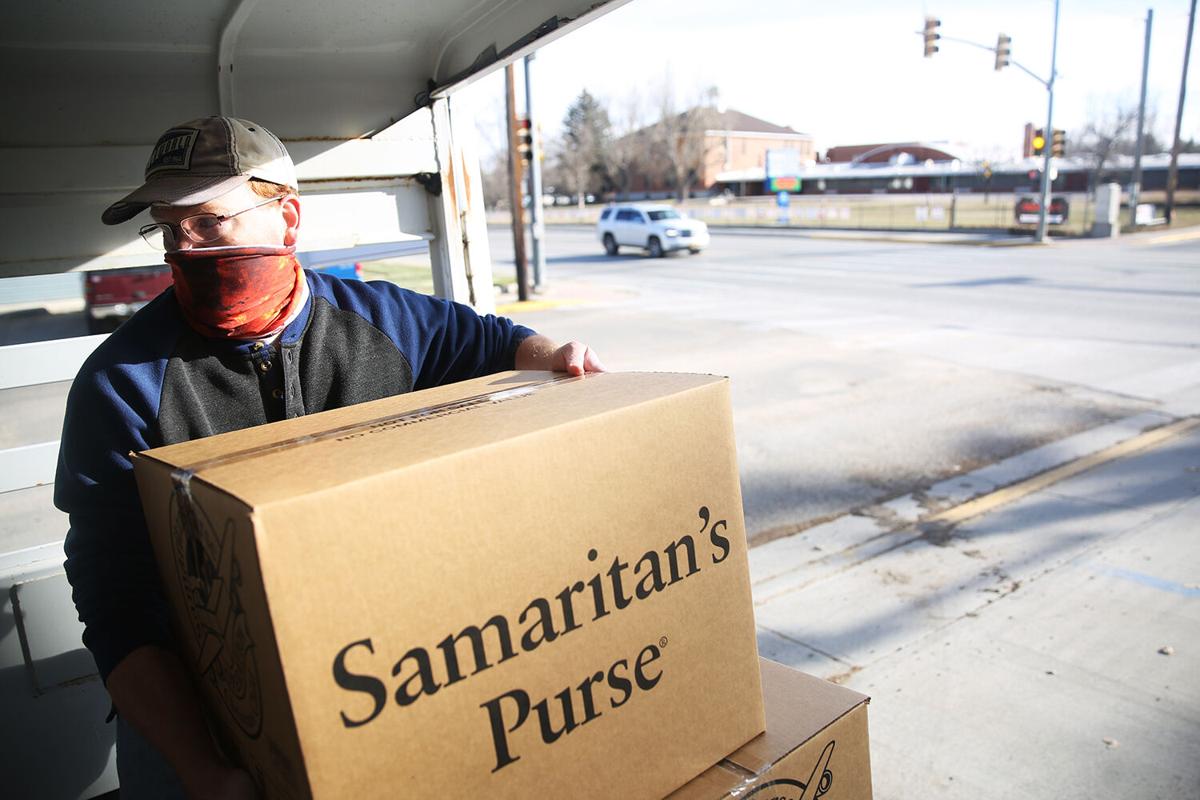 Robert Schlichting lifts a box off of the new stack at the back of the trailer to move it up onto the stacks in the front on Monday at Grace Fellowship Church. Each box is packed specifically according to directions from the program before being packed up and sent off. 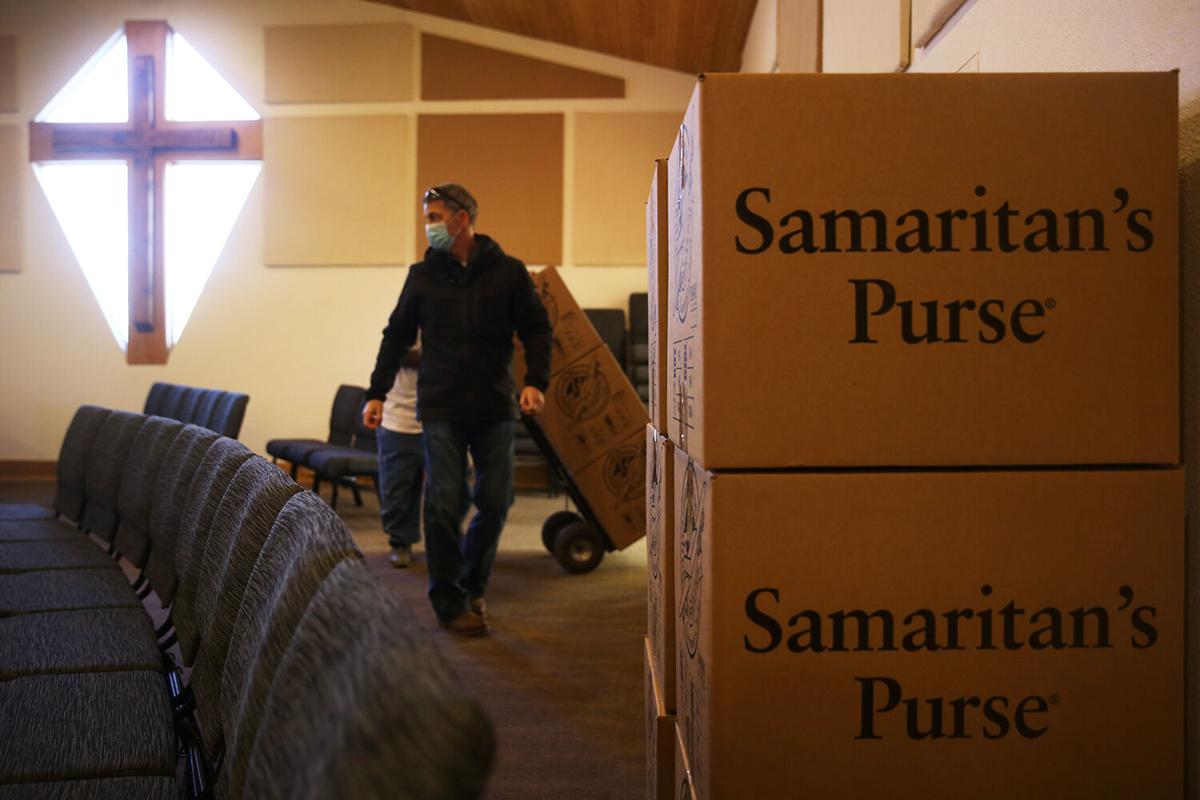 The packed boxes were stored in the sanctuary of the Grace Fellowship Church throughout the week last week as donations came in. 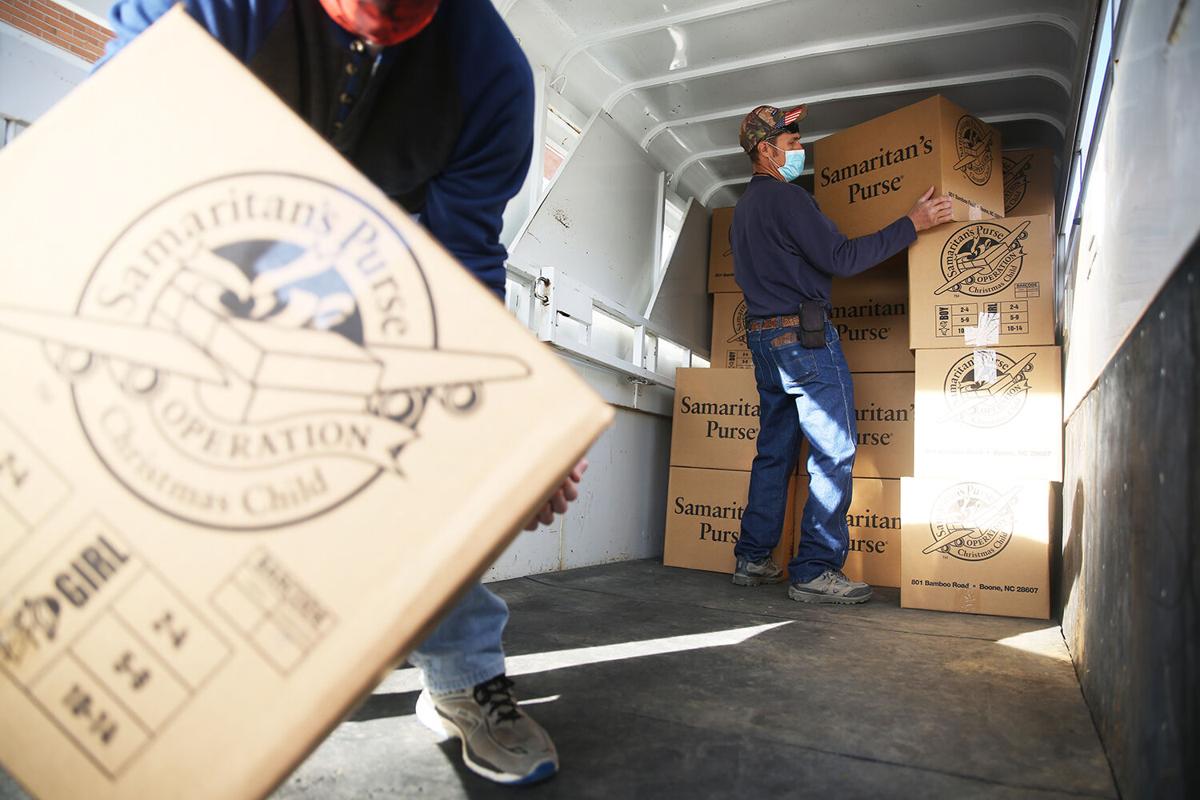 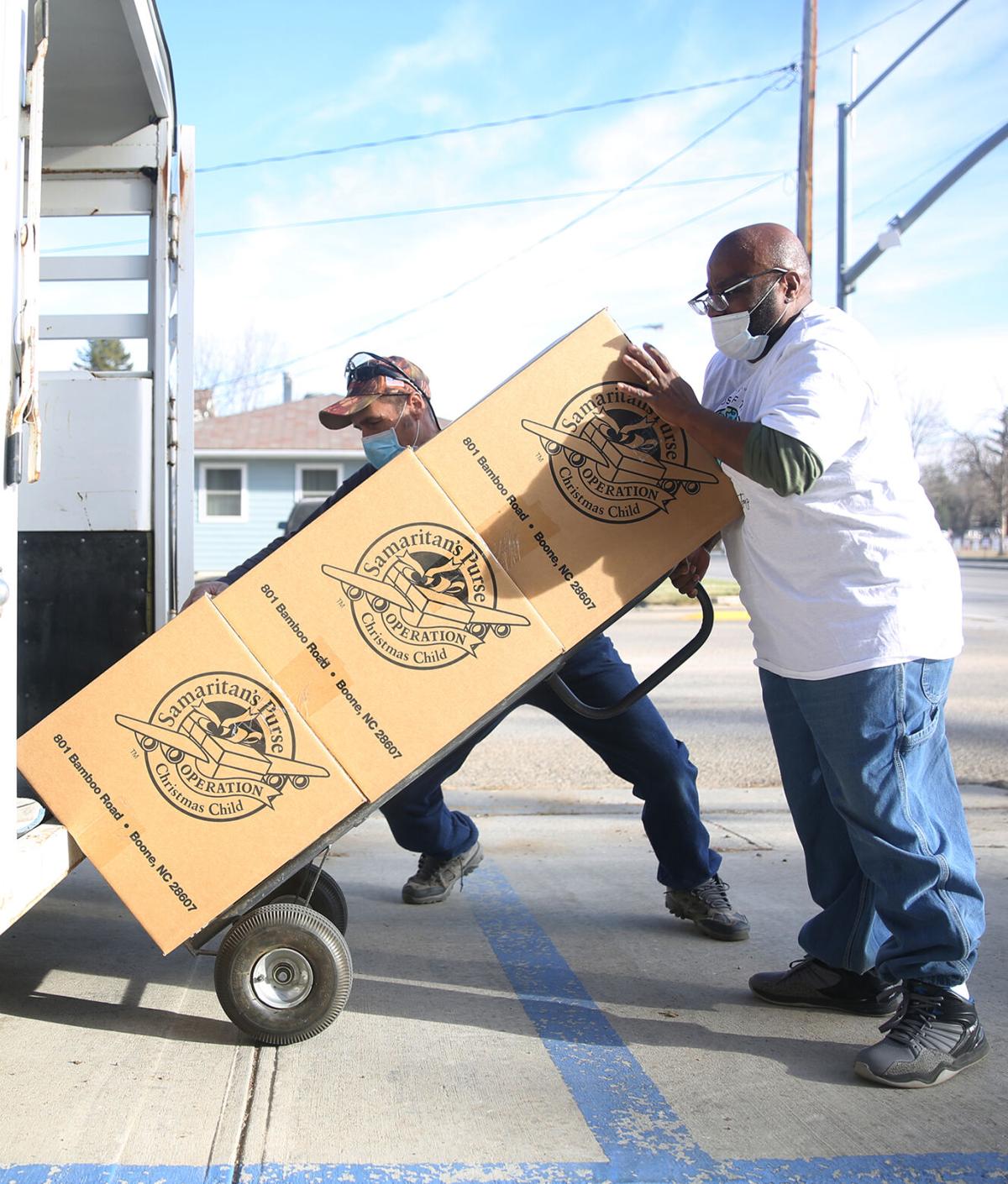 Gabryl Lewis pushes the stack of boxes up into the trailer with the help of Dennis Thorson on Monday at Grace Fellowship Church. Volunteers used two hand trucks to move the boxes out of the sanctuary, down the stairs and to the trailer parked on the curb outside. 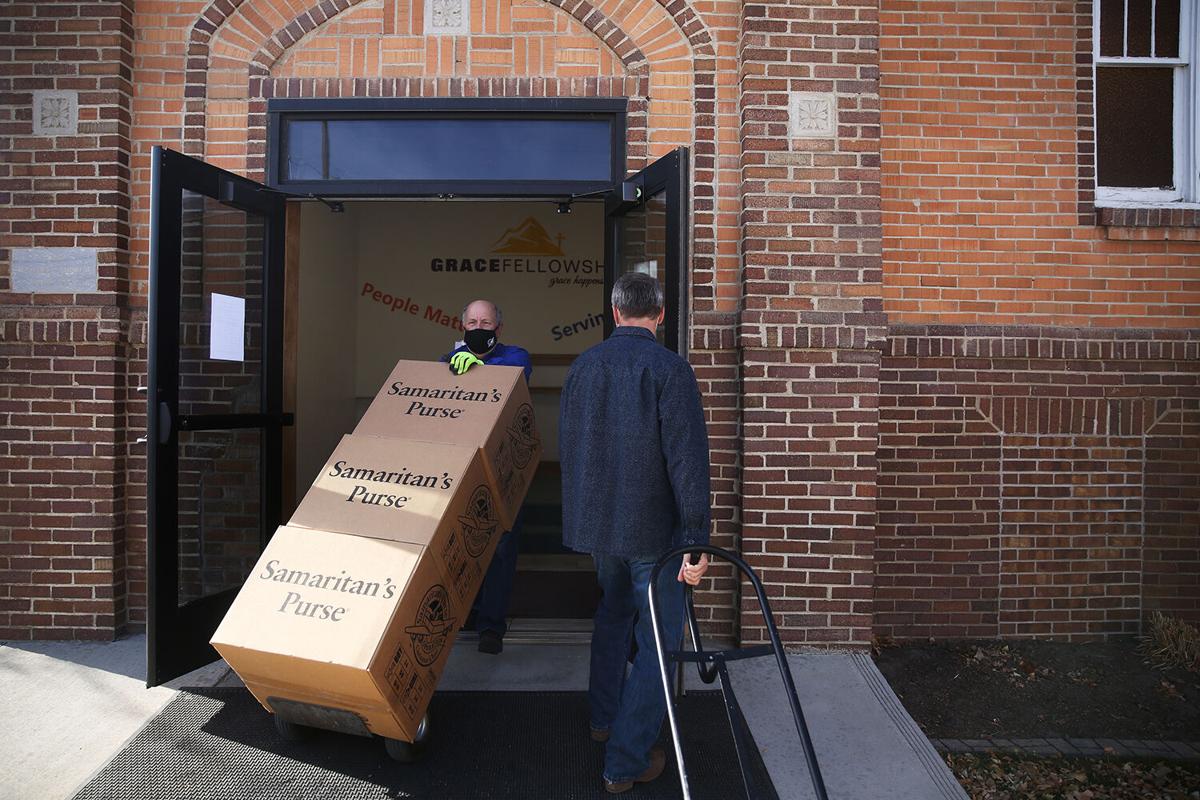 Richard Zander rolls his next load of boxes out the front doors to the trailer to load on Monday at Grace Fellowship Church. This year Buffalo, and surrounding areas like Clearmont and Story, was able to collect a total of 978 boxes to donate, only 10 off from what they collected last year. 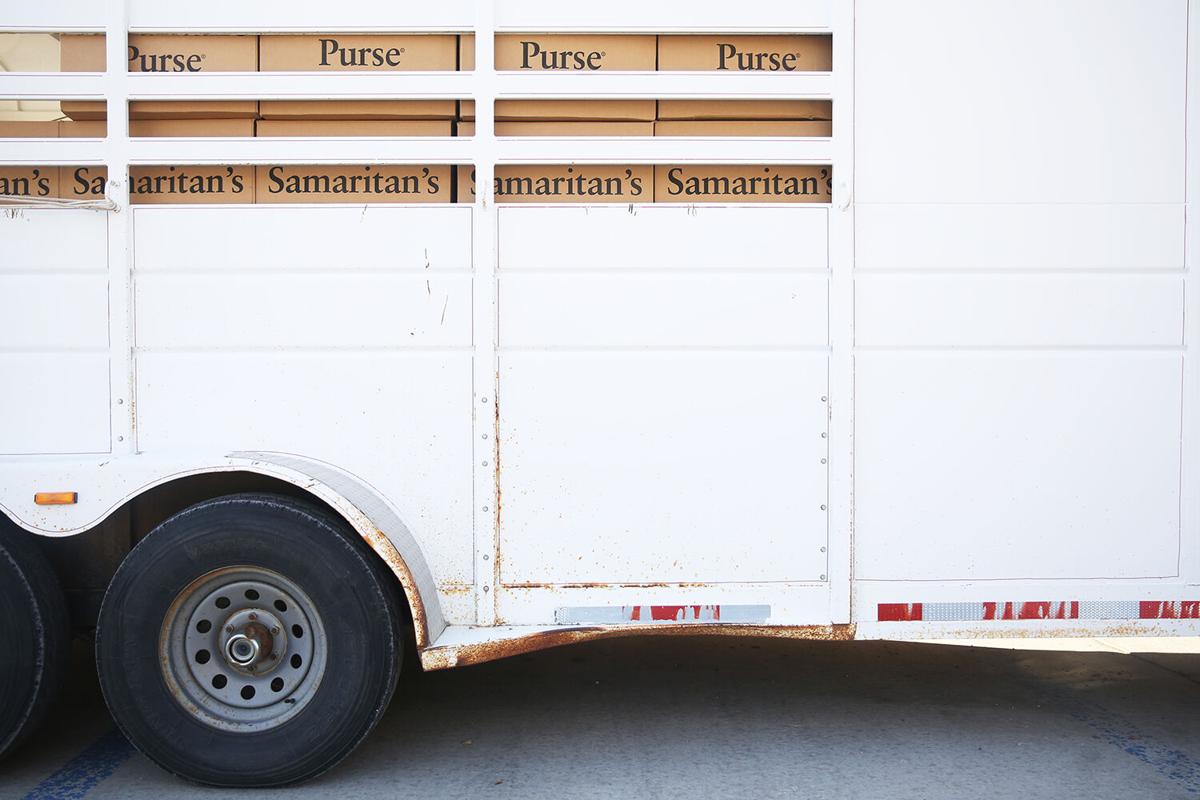 Boxes were loaded into the stock trailer, almost filling it before being tied down for their trip to Gillette on Monday at Grace Fellowship Church. After going to Gillette, the boxes will be taken down to Denver to the larger distribution center before being sent out to kids.

Operation Christmas Child, a mission project that delivers gift-filled shoeboxes to children around the world, is in full gear in Buffalo.

Residents packed almost the same number of shoeboxes this year as they had in previous years, down only 10 boxes from last year’s 988, according to MaDonna Zander, an area coordinator for Operation Christmas Child.

“It is amazing,” said Zander, “all things considered.”

Every year, community members fill shoeboxes, according to age and gender, with toys, hygiene items and school supplies, and leave them at Grace Fellowship, the drop-off location for Operation Christmas Child in Buffalo. Program coordinators at the national level deliver the boxes to children in more than 100 countries who are affected by war, poverty, famine, disease and disaster.

Zander said she encourages people to get creative with how they pack the boxes — they can even use handmade gifts — as long as they include essentials such as a toothbrush, or a pencil and paper.

“We ask people to pray about it and put in the boxes what they are led to put in there,” she said.

Zander, a member of Grace Fellowship, opened the drop-off site at the church nearly 12 years ago to collect boxes for the program.

“If I can make an eternal difference in a child’s life by filling a shoebox,” she said, “then sign me up.”

After people drop off their boxes, Zander and her husband, Richard, another area coordinator, pack each one with a booklet called “The Greatest Gift,” which tells the story of Jesus Christ from the Bible, and children who receive a box are also invited to participate in a 12-week discipleship program called “The Greatest Journey.”

“When you fill that box, you are a missionary,” said Richard. “You are fulfilling the great commission.”

On Nov. 23, local volunteers helped load the boxes on a horse trailer, and Ric Olsen, another volunteer, offered to haul them to Gillette, where the boxes will be transported to a processing center in Denver, one of eight locations in the U.S. Since 1993, Operation Christmas Child, a project of international Christian relief organization Samaritan’s Purse, has processed and distributed over 178 million shoeboxes to children around the world.

“It is important that no matter what your stage of affluence in life is that you are able to give back,” said Olsen. “It gives me a happy heart to help out.”