You are the owner of this article.
Edit Article Add New Article
You have permission to edit this article.
Edit
Home
News
Sports
Profiles
Opinion
Classifieds
Obituaries
Contact Us
Subscribe
e-Edition
Photos
State
Covid-19
1 of 9 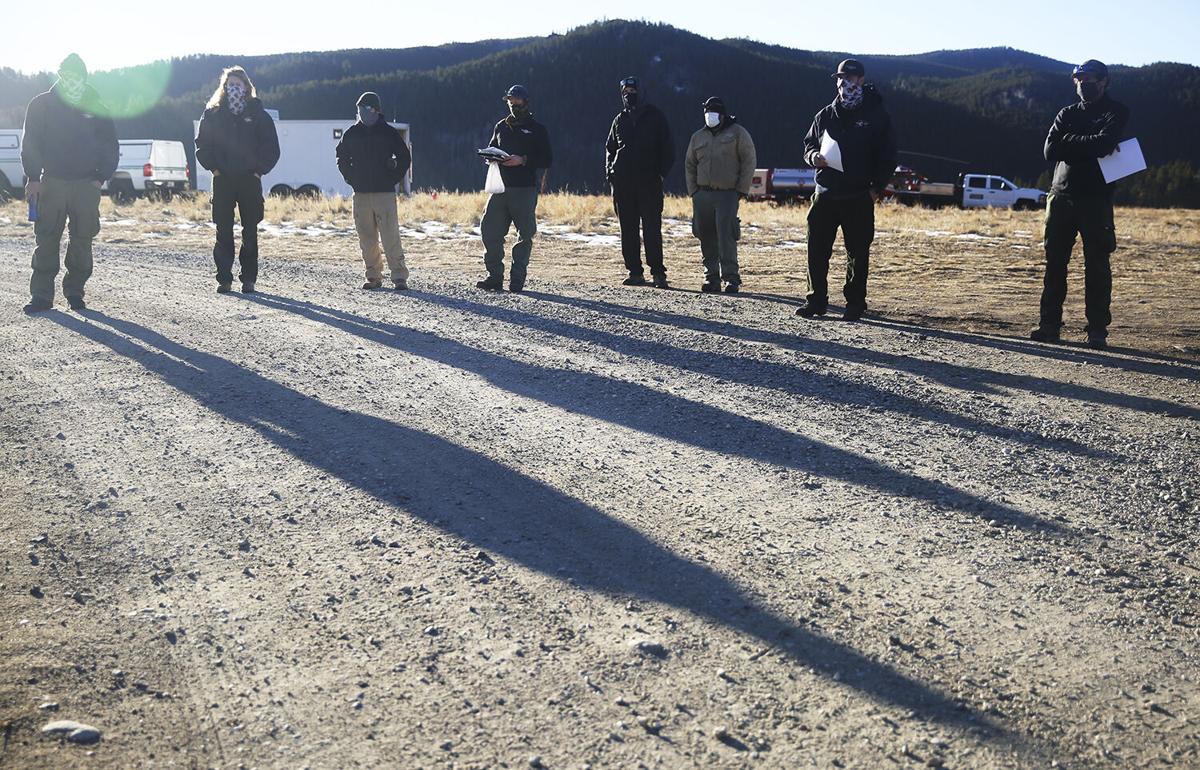 Forest Service employees and visiting helicopter crews gathered together for the opening briefing that explained the project and the goals set on Sunday in Bighorn National Forest. Everyone gathered at the Grouse Mountain pullout as the base location where the helicopter could land.

A helicopter crew based out of the Denver metro area traveled north for the prescribed burn that was scheduled to last as many as three days to cover up to 10 total units and 38,000 acres. Because the goal was to burn such a large tract of land, the helicopter and fire ignition sphere technology make it possible to work over a large tract of land with more time efficiency. 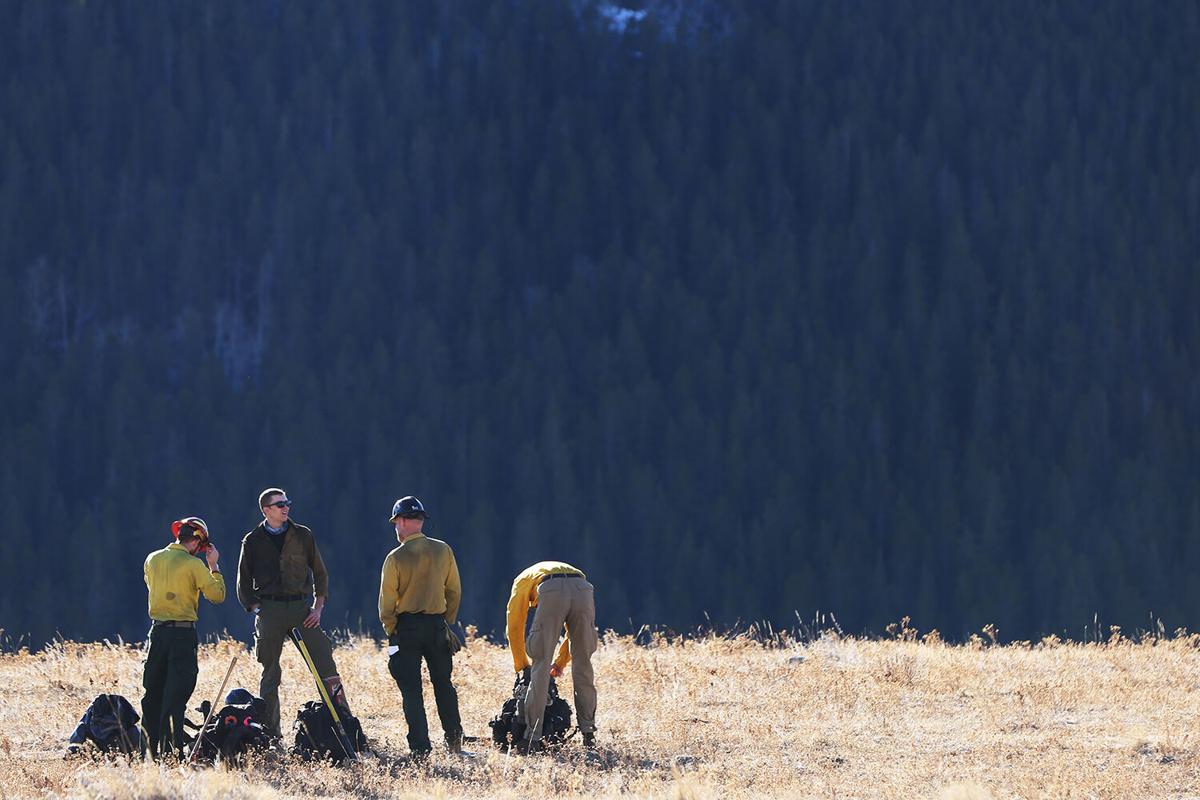 A group of firefighters pack the finishing touches into their packs before heading out to observe and support the fires on Sunday at the Grouse Mountain pullout. The group was picked up at the base location and then flown out to the edge of the first unit to serve as on the ground eyes for the flames and to assist on location if need be. 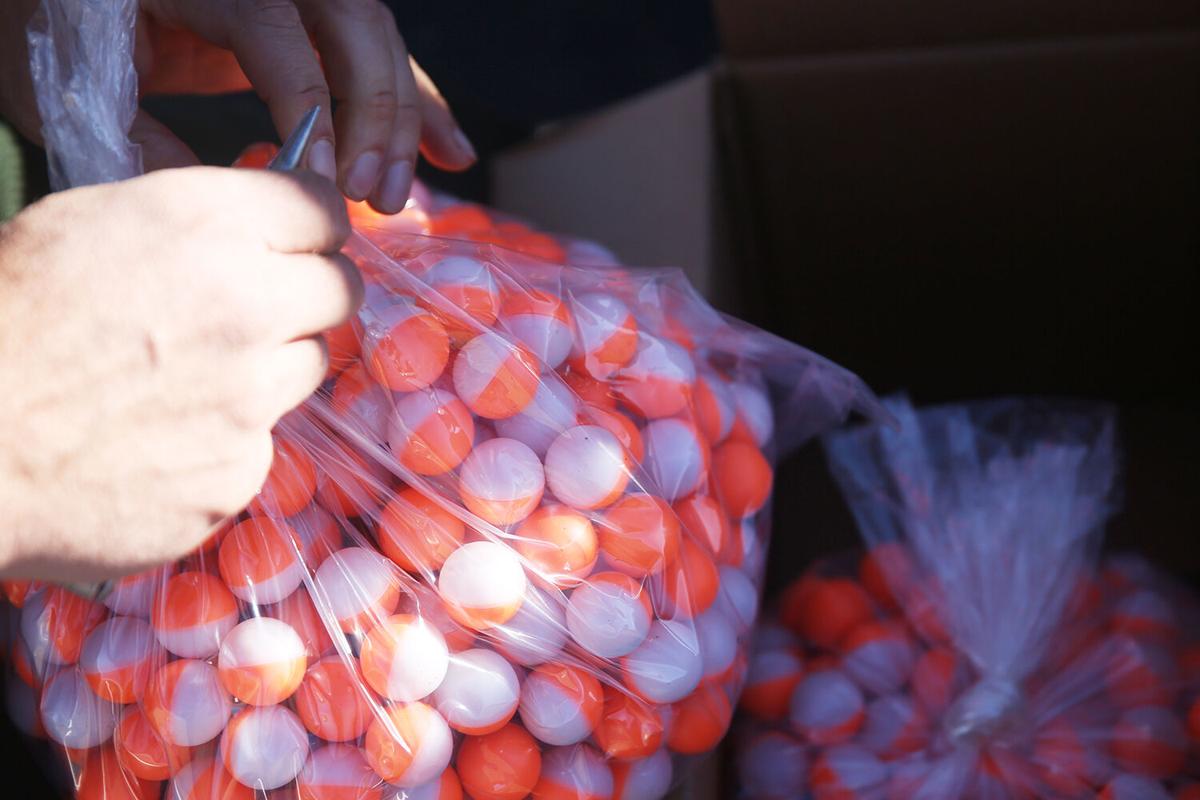 Dragon eggs are small hollow spheres that have small amounts of potassium permanganate powder inside them. When injected with glycol, or non-diluted antifreeze, a timed chemical reaction begins that ultimately sparks a fire in the ball that then spreads to grasses and other flora surrounding the sphere. The dragon eggs can then be dropped at designated intervals so as to allow the individual fires started by each egg to ultimately grow together into one, large mass. 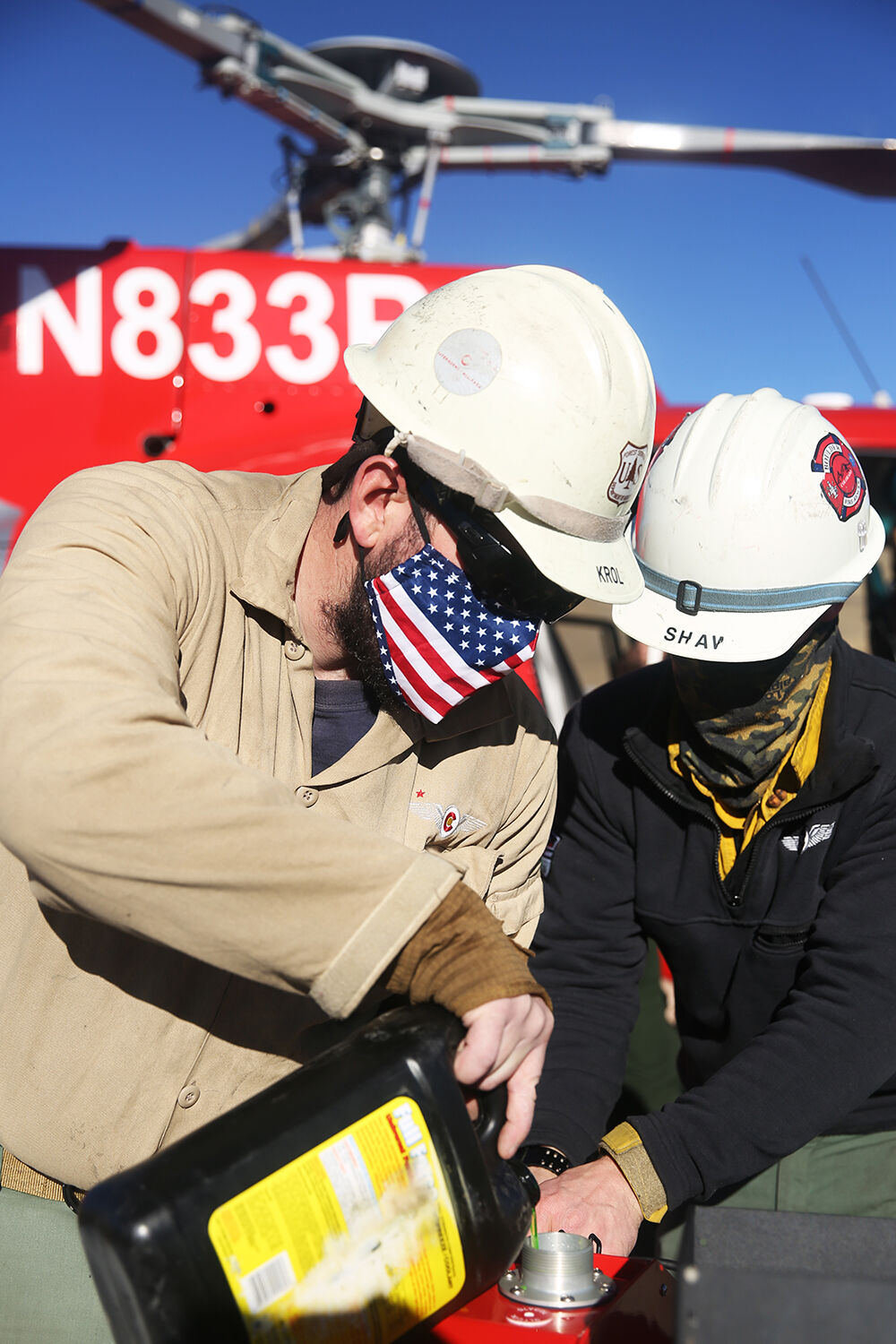 Helicopter crew member Brian Krol poor new glycol into the dragon egg dispenser with the assistance of helicopter manager Nick Shaw on Sunday in Bighorn National Forest. The machine has two chambers, one holding the glycol and one holding water. The water is held in case of emergency as a immediate fire extinguisher within the dispenser device. 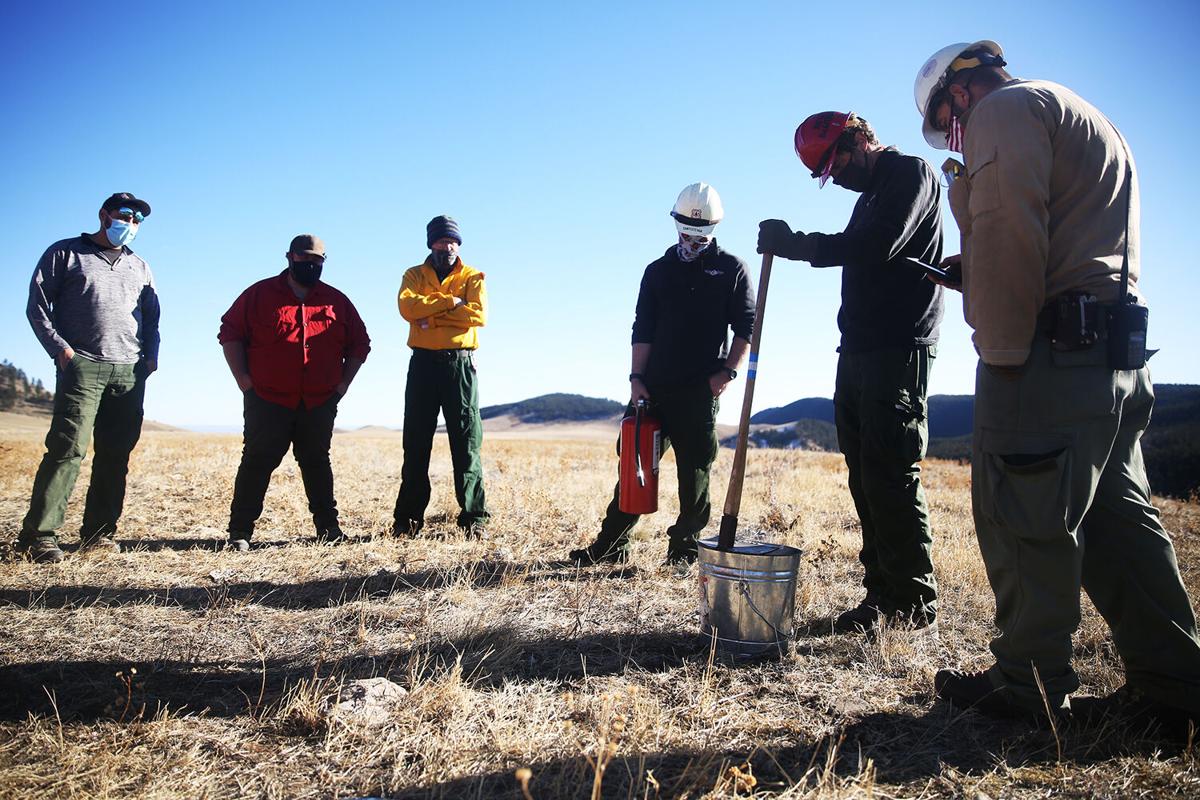 Before beginning the dragon egg drops, the machine and eggs are tested out of the helicopter to make sure that everything is working correctly on Sunday in Bighorn National Forest. They drop the injected egg into a bucket filled with dirt so that they can make sure the fires lights without actually starting a ground fire. 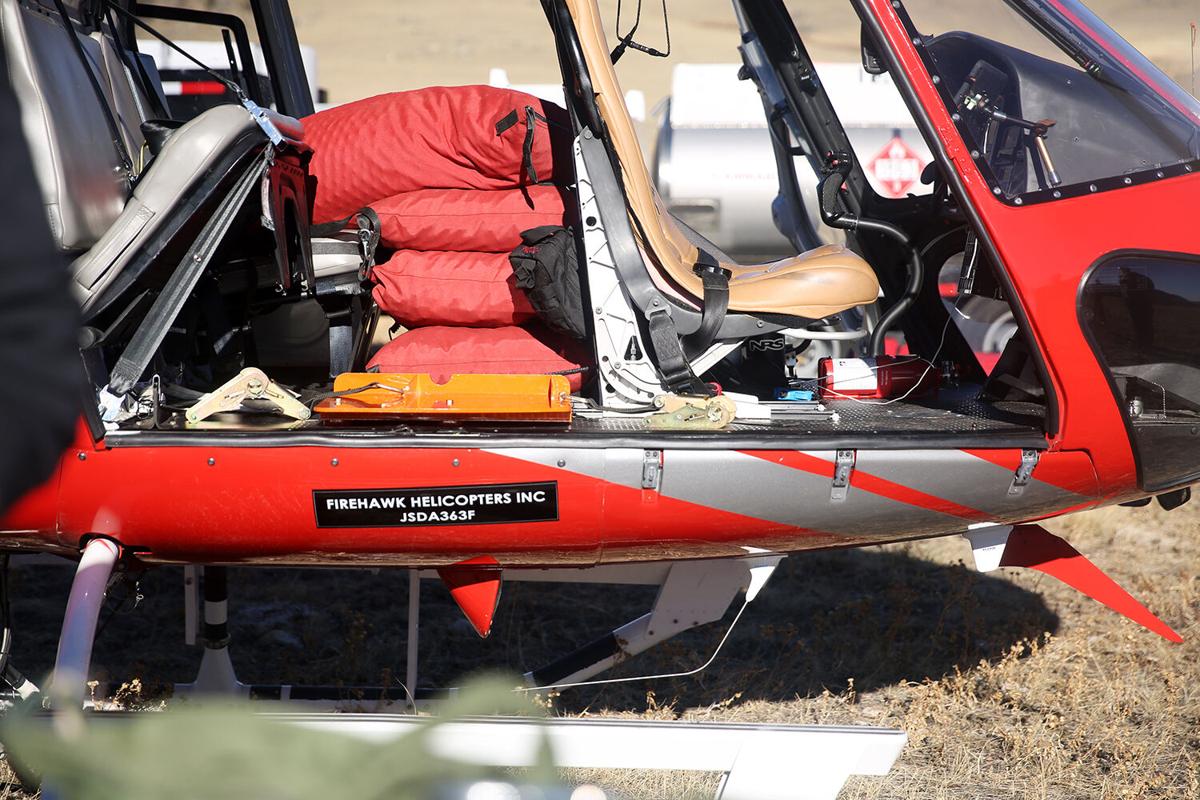 The dragon eggs are loaded into large bags that are secured in the helicopter to be poured into the machine as needed. The smaller bags weigh about 20 lbs. and the large ones 40, all of which is carefully recorded to check weight in the helicopter. The crew expected that a job of this scale if done in full would require roughly 10,000 total eggs. 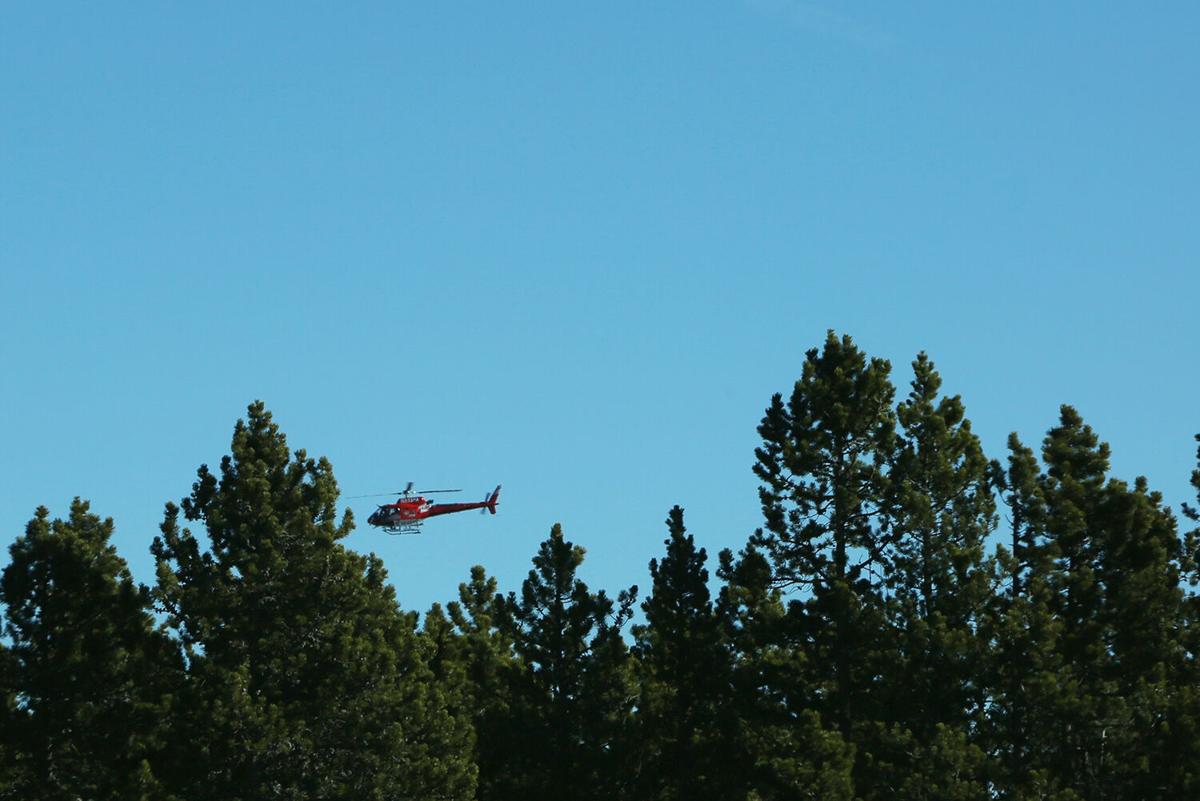 The helicopter returns back to the base location to discuss whether or not to continue trying to burn on Sunday in Bighorn National Forest. A large number of factors ranging from weather to availability to ground moisture are considered when planning a burn. The fires weren’t catching as needed to meet the objectives of the burn and so ultimately they stopped flying earlier than orignally expected. 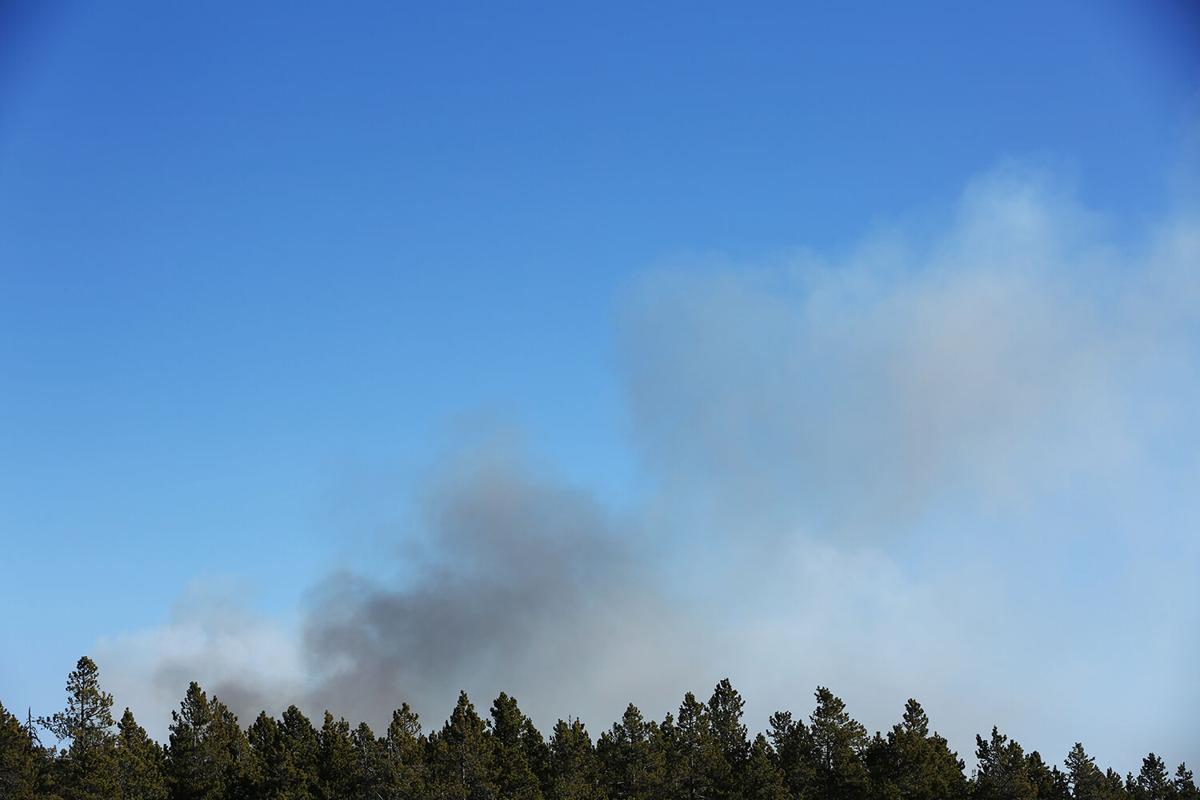 Smoke rose into the warm sky as a few trees caught fire during the prescribed burn on Sunday in Bighorn National Forest. The fires weren’t catching from the dragon eggs alone and so ground crews tried to assist with their equipment - but ultimately without the desired success.

With a lucky patch of perfect weather, the Forest Service set out to spark a project long in the works - a prescribed burn of 10 units throughout the Bighorn National Forest. The burn project is aimed at thinning out timber and foliage in the designated areas all inside Buffalo’s watershed. The goal? To use fire now under control to naturally thin out the forest and prevent a larger fire from developing when not under the control of the forest service. The group utilized a machine called a red dragon, which sparks a chemical reaction in small balls called dragon eggs that are dropped to the ground. When they hit the ground they are supposed to catch fire and spread to surrounding ground fuel. The process allows burning of large areas quickly and encourages more acreage in less time to be burned. The project was less successful than hoped with weather changes, most likely, preventing the burning of much land at all but they project remains on the table and they hope to pick up again when they can next.