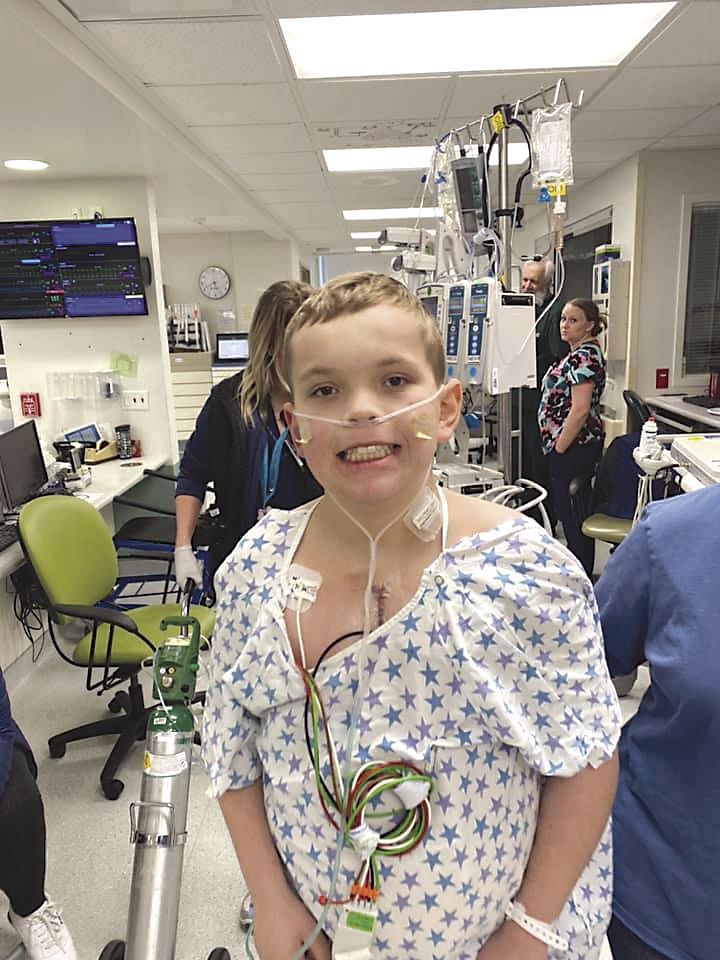 Thirteen-year-old Bryson Quinney manages a smile just a couple of days following a heart transplant he underwent at Primary Children's Medical Center. Bryson, who was born with half a heart, has been at PCMC for several weeks and has been featured on multiple TV news programs after his desire to be a firefighter and the efforts of fire departments worldwide to offer support went viral.  (Courtesy photo.) 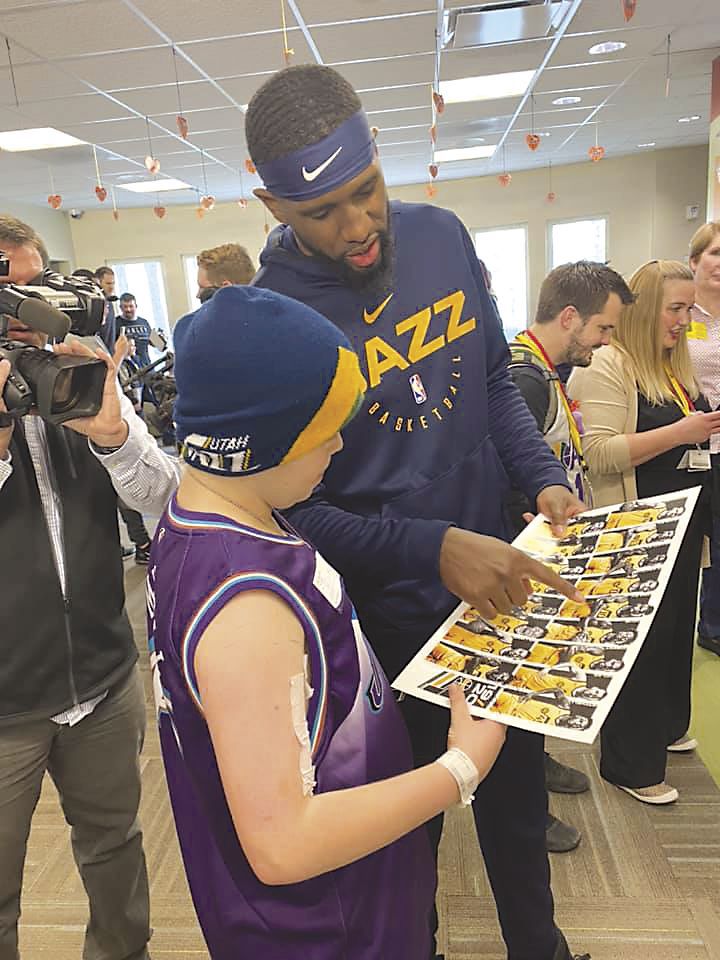 EVANSTON — Thirteen-year-old Bryson Quinney is one tough young man with a remarkable story.

He wants to be a firefighter when he grows up, just like his dad. He collects firefighter memorabilia. He likes sports and the Utah Jazz and hanging out with his friends. In other words, he’s a lot like any other young teen.

Bryson, however, is unlike those other teens in one huge way. He was born with half a heart, and on Thursday, March 5, he got a new one.

According to his dad, Uinta County fire chief Eric Quinney, Bryson was born in Evanston in October 2006. Bryson’s oxygen levels were checked at the hospital following a “spit up episode,” after which his skin appeared blue. When his oxygen levels were still low the next day, his doctor suggested Bryson be evaluated by a mobile echocardiogram team that was in town from the University of Utah.

It was during that echocardiogram that Bryson’s heart condition was discovered and he was urgently transferred by medical helicopter to Utah. Not only was Bryson missing the right side of his heart, but the large arteries from his heart were backwards and there were problems with his heart valves. Bryson had his first open heart surgery when he was just seven days old.

Bryson almost immediately established himself as a fighter. After several weeks in the hospital, his parents, Eric and Jennylin, were able to take him home around Thanksgiving of 2006. Over the first few years of his life, there were frequent hospital stays, a second open heart surgery at six months of age and another when he was 2-1/2 to “replumb” his heart to allow it to function well enough for Bryson to survive.

Following those heart surgeries, Bryson had several years of doing well. He required occasional oxygen when not feeling well but was able to function most of the time without it. A couple of years ago that began to change. Bryson began to require oxygen all the time and it was discovered that his heart problems were also causing liver damage.

The Quinney family began preparing for the inevitable heart transplant, and Bryson was placed on the transplant list in fall of 2019.

In late January of this year, Bryson and his parents checked into Primary Children’s Medical Center (PCMC) in Utah for some routine procedures, when they were unexpectedly told there was a heart available. However, it was not meant to be and the surgery was cancelled due to some compatibility issues.

The decision was made to keep Bryson in the hospital until a heart became available, which Eric said was done for multiple reasons. Bryson’s breathing difficulties eased at the lower elevation and the transplant could be facilitated more quickly and easily if Bryson was already in Salt Lake, not to mention that hospitalized patients move up somewhat on the transplant list. His parents arranged to take turns staying in Salt Lake City with him while they waited.

The difficult reality of a 13-year-old boy staying in a hospital for an extended period of time, away from school and friends, was challenging. In an effort to help cheer Bryson’s spirit, a friend of Eric’s — a firefighter in Cheyenne — reached out to a friend with a Utah fire department, asking if they could swing in a visit to the hospitalized boy.

T-shirts, hats, badges, jackets, blankets and cards started arriving by the day. The hashtag #BrysonStrong continued to circulate, with fire department and rescue crews around the world answering the call.

Eric said departments in Australia, Germany, England, Canada, Japan and more have sent mail to Bryson in the hospital. In fact, just prior to his transplant he was receiving so much mail it was taking a couple of hours to open it all, and his hospital room was described by Eric as the “ultimate firefighter man cave” decked out with all the gifts he’d been receiving covering progressively more space.

When players from the Utah Jazz visited PCMC, Bryson got to visit with some of his basketball heroes. Numerous Utah TV stations visited his hospital room to share Bryson’s story with an even larger audience. The #BrysonStrong Facebook page contains literally hundreds of pictures of visits with fire department crews and items received.

While social media and the news crews only recently learned of Bryson’s story and his amazing determination, the people of Uinta County have been supportive through it all, selling bracelets, decals and T-shirts; starting online auctions and GoFundMe pages; and dedicating school projects and athletic events to Bryson.

On March 5, Bryson underwent a nearly 12-hour surgery to clean up scar tissue from previous surgeries, remove his old heart — which he had named Kyle and described as a high school dropout that never fully developed — and transplant his new donor heart. Since that time, Bryson has been recovering in the cardiac intensive care unit, with his parents by his side, as he slowly gets moving and undergoes physical therapy, and on Wednesday, March 11, he was able to leave the ICU and move to a regular hospital floor.

He will be closely monitored for rejection and is still looking at a continued hospital stay. Following release from the hospital, Bryson and his parents will be staying at the Ronald McDonald House for possibly a couple of months so he can remain in Salt Lake City close to his healthcare team.

Throughout Bryson’s journey, his parents have regularly posted to Facebook, sharing information, photos and updates nearly daily and sometimes more often. During his lengthy surgery, Eric posted updates every couple of hours, as more than 1,600 members eagerly waited for news and offered support from near and far.

When sharing the news that Bryson was heading to surgery with the OR team, they asked for prayers, not only for Bryson, but for the donor’s family, well aware that Bryson’s gift of life meant a devastating loss for others.

Though there is still a lot of recovery remaining, a photo Eric posted to Facebook after Bryson transferred out of the ICU shows a smiling, rosy-cheeked young man who is quite obviously #BrysonStrong.

Scattered clouds with the possibility of an isolated thunderstorm developing during the afternoon. High around 75F. Winds NNE at 10 to 20 mph. Chance of rain 30%.