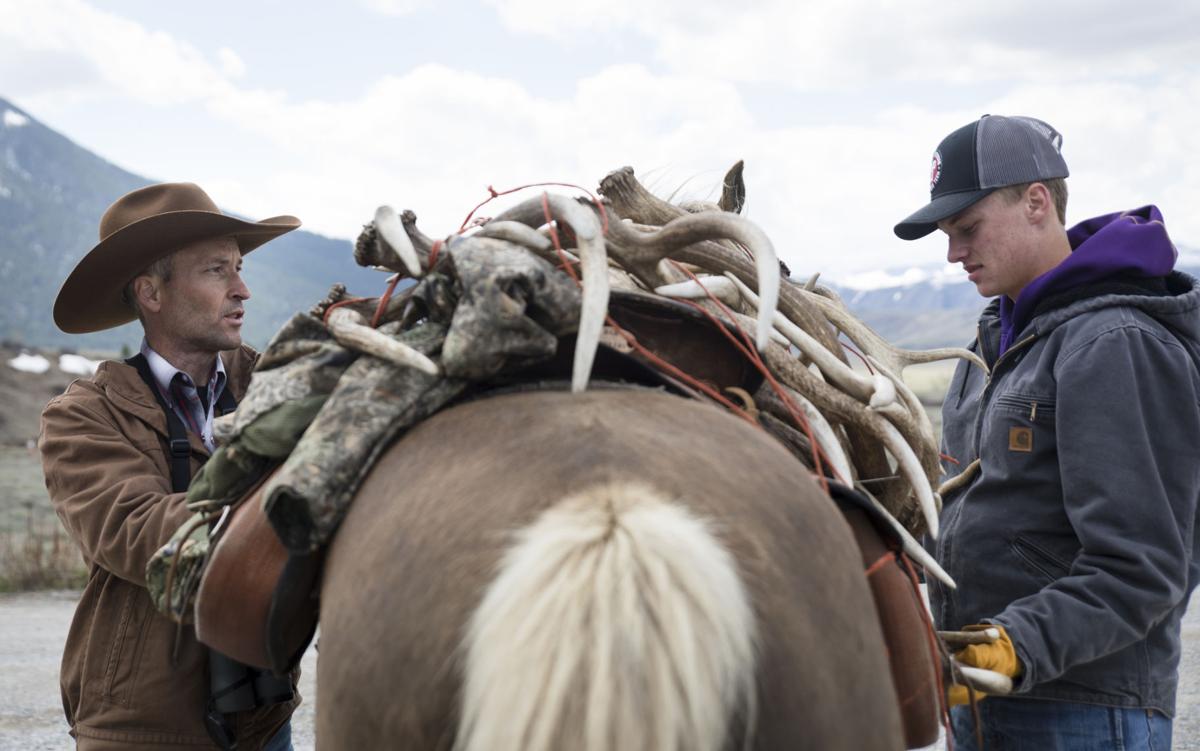 Brad Orme, left, of Ashton, Idaho, and Tat Cutler, of St. Anthony, Idaho, unload a haul of antlers from their horse Friday afternoon after returning from shed hunting on national forest lands adjacent to the National Elk Refuge. Orme has been coming to the antler hunt for 15 years, but this was Cutler’s first time. New rules this year mandated that no one was allowed to touch or collect antlers until noon Friday, so many hunters went out and sat by their finds until then. 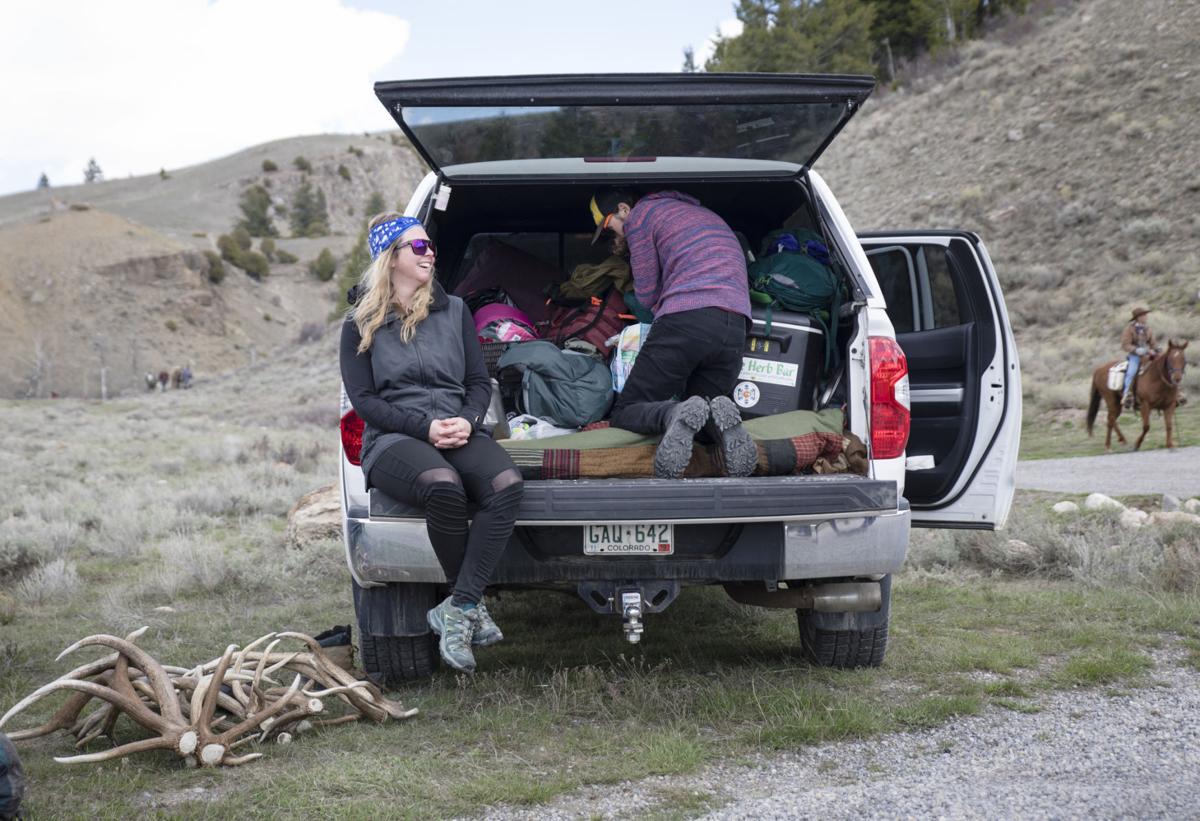 Lynzee Lewis, left, laughs with Tyler Howard, right, and their friends while resting on their truck after returning from a long day of antler hunting Friday afternoon. Lewis, from Dylan, Colo., traveled with her friends from Colorado to participate in the opening day of the shed hunt.

JACKSON— Alta resident Gill Kushman had good company Friday morning as he combed over the Bridger-Teton National Forest on horseback, trying to stay lawful by letting valuable elk antlers lie where they may.

“It was terrible,” Kushman said. “We rode past like dozens of horns.”

Trying to do the right thing came back to bite. Invariably the antlers he had eyed disappeared, courtesy of less lawful shed hunters who scoffed at a new regulation requiring them to wait until noon Friday to touch an antler.

“If I could do it over again, I’d pick them up,” Kushman said. “Everyone else did.”

Division over what to do about a difficult set of rules caused conflict. Mountain View resident Skeeter Aimone said he witnessed multiple fist fights — “straight-up drag outs” — over who had the right to antlers left on the ground before noon, since they couldn’t legally be possessed.

“The new regulations, they’re not going to work,” Aimone said. “They’re making people do things that they don’t want to do.”

Frustration and displeasure with changes in the rules governing Wyoming antler hunting was nearly unanimous among the many hundreds of people who flocked to the forest adjacent to the National Elk Refuge.

Most came from out of state, and their presence and inkling to continue an annual Jackson Hole tradition was an act of defiance and disregard for requests to stay home while the novel coronavirus was keeping the community largely closed.

“It’s a great opportunity to get outdoors, but I hope that those that shed hunt that live outside of Wyoming will wait until later in the spring or maybe next year to come,” Wyoming Game and Fish Department Director Brian Nesvik said in a COVID-19 press conference the day before the opener. As Nesvik spoke from a podium in Cheyenne, antler hunters were eagerly lining up at the Teton County fairgrounds.

Gov. Mark Gordon made the same recommendation, under the guise of a directive — an unenforceable one — that instructed people crossing state lines before May 8 to quarantine themselves for 14 days. Teton County law enforcement officers, who corral the shed hunters every spring, echoed that request over social media and in advertisements for weeks leading up to the hunt.

Driving the concern was COVID-19, which has hit Teton County worse on a per-capita basis than anywhere else in Wyoming. There have been 98 total cases (67 lab confirmed and 31 probable) and one death. While only eight people as of Tuesday were known to be actively dealing with the disease, fears of a flare-up have prompted stricterhealth orders here than elsewhere in the state.

Yet, the Elk Refuge tallied 260 vehicles arriving on Refuge Road at 6 a.m. and in the hours that followed. That’s about average, refuge deputy manager Cris Dippel said, and suggests that nearly 800 people came out for the shed opener, conservatively estimating three people per rig.

While the national forest immediately adjacent to the refuge is shed hunting ground zero in Jackson Hole, there was plenty of action elsewhere too.

“Compliance was pretty good, but there were still a lot of people,” Game and Fish spokesman Mark Gocke said. “[Lash] thought there was as many — or more — people out down south compared to past years.”

Lash cited one shed poacher he spotted with antlers before noon who tried to get away, but otherwise law enforcement all around the valley was lenient.

Dippel’s team of eight law enforcement officers detected 80-plus violations, primarily people cutting across and combing over the National Elk Refuge, which is closed to shed hunting. Ordinarily they would have been handed $280 trespassing citations, and then fined $10 a pound for antlers in their possession. This year they got a pass on trespassing and were told to drop the elk antlers, as law enforcement officers’ safety was prioritized and close contacts with outsiders were avoided.

“Because of COVID,” Dippel said, “we made a decision not to cite and do more education instead.”

North Jackson Game Warden Jon Stephens, patrolling near the refuge that morning, was inundated by violation reports during the first six or so hours of daylight when access was allowed onto the Bridger-Teton National Forest but shed hunting was prohibited. Staffing the phones at Game and Fish’s Jackson office, Niki Johnson fielded 120 phone calls — about half from shed hunters calling in their counterparts’ illegal activities.

“[Stephens] would try to follow up to the extent he could, but you could spend an hour trying to catch up with an individual who got reported,” Gocke said. “In that time, you’d get another six to eight reports of people who were in violation.”

The agency was understaffed and dealt a difficult hand with the new regulations. Stephens followed suit, not bothering with citations.

“It was frustrating for the antler hunters, and we were taking all their calls where they were expressing their frustration,” Gocke said. “And it was also frustrating for the Game and Fish because we want it to be fair. We want to enforce it properly, and it’s just frustrating when you can’t make it fair for everybody.”

The smattering of shed hunters who lingered at the Flat Creek trailhead near sundown Friday were complimentary of one component of the 2020 antler rush.

“They managed the traffic better than they ever have,” Alta resident Kushman said.

This year the Jackson Police Department debuted a first-come, first-out number system, encouraging participants to congregate at the Teton County fairgrounds. The vast majority — some 187 vehicles’ worth of shed hunters — complied.

Coeur d’Alene, Idaho resident Brandon Pitcher showed up first, having arrived Wednesday night. His front-of-the-line position paid off, and 48 hours later he lounged near a campfire in the company of a “dead head” (a skull with antlers attached) from a trophy bull elk.

Not everyone was thrilled about the end of the normal midnight antler opener, which used to kick off in conjunction with the termination of the forest’s 5-month winter wildlife closure. Driggs, Idaho resident Jessica Mills missed the romanticism of the chaotic rush.

“The tradition is the headlamps everywhere,” Mills said. “It was at night, and everyone else was sleeping in the world. That’s what was cool.”

While meeting in March, the Wyoming Game and Fish Commission pushed the start time to noon, out of concern for wardens working through the night and the difficulty of enforcement in the darkness.

Their intent, Gocke said, was “good” and may make sense for other parts of western Wyoming, where vast areas of federal land aren’t entirely closed to public access through the winter months. But the 12-hour gap created a unique challenge in Jackson Hole and particularly east of the refuge, where hundreds of people dash to find scores of antlers in a matter of hours. Game and Fish will be seeking a fix, he said.

“We’ll talk internally in the Game and Fish Department, and then visit with the commission about it at some point,” Gocke said. “Rest assured, for the frustrated antler hunters that were out there, we’re going to make every effort to make it right and more fair.”

Already, Kushman had one idea for a solution: “They just need to be aligned with the forest, and the Forest Service just needs to be on board and open the forest at noon.”

Cloudy early with some clearing expected late. Slight chance of a rain shower. Low 38F. Winds WSW at 10 to 15 mph.

Cloudy early with some clearing expected late. Slight chance of a rain shower. Low 38F. Winds WSW at 10 to 15 mph.