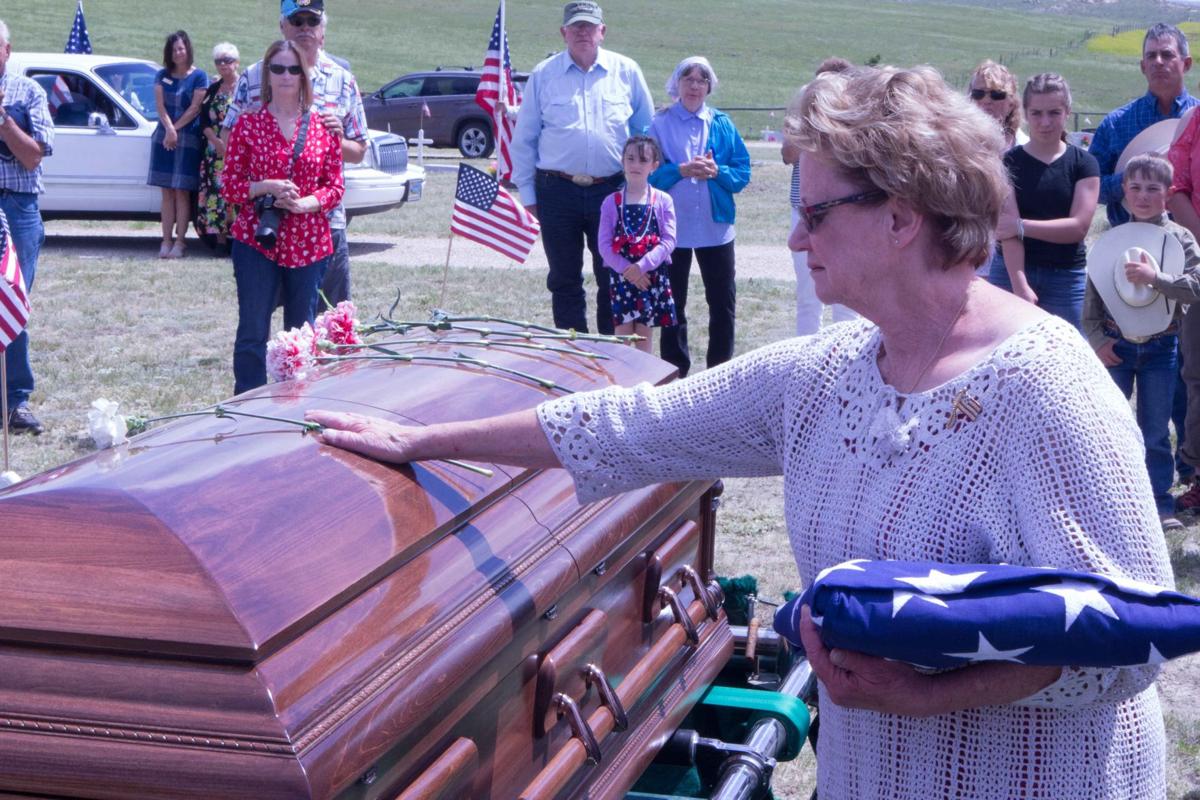 Zena Husman places a carnation on the casket of her uncle Cpl. Demaret Marston Kirtley. Kirtley was buried in his hometown of Kaycee on Saturday – nearly 69 years after his death in the Battle of the Chosin Reservoir during the Korean War. 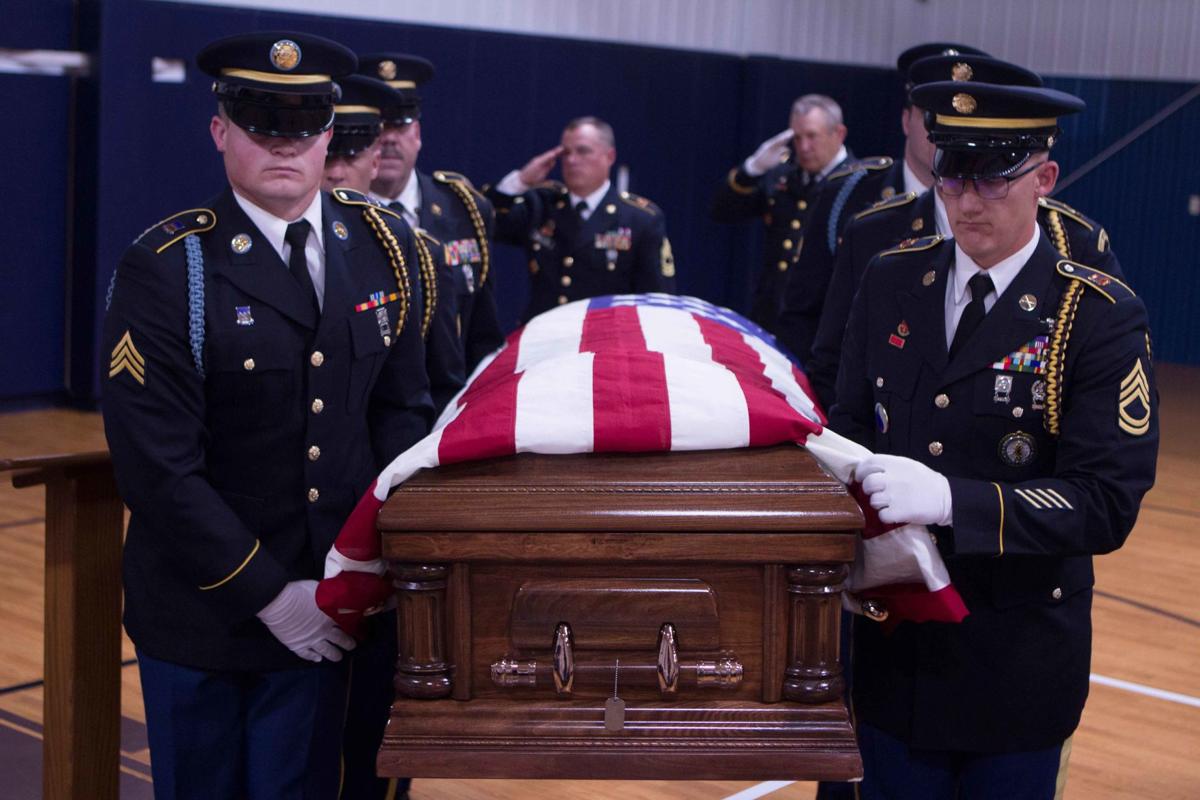 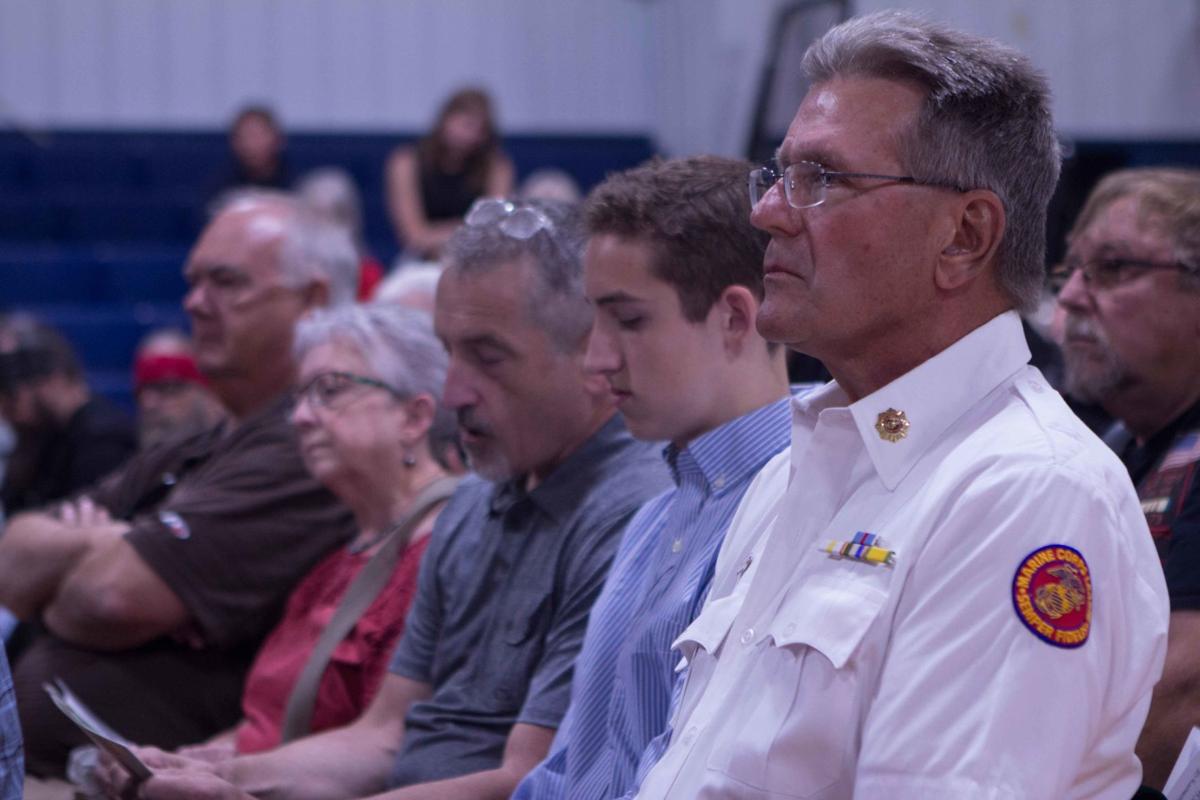 Hundreds from across the nation and the state gathered at Harold Jarrard Park on Saturday for the funeral of Cpl. Demaret Marston Kirtley nearly 69 years after Kirtley’s death during the Korean War. 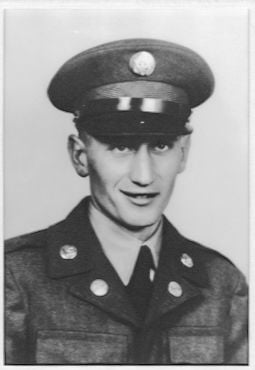 “Thank you for your service, Marston. It is once again time for
you to belong to a time of peace and happiness. You are home now where you belong – where you were loved all these years,
where you were meant to be and where you will never be forgotten. Rest now, Marston. And welcome home.”

The story of Cpl. DeMaret Marston Kirtley is one told in faded black-and-white photographs of young Marston playing with turkeys and sheep at his home in Kaycee.

It is a story told in handwritten letters and old newspaper clippings and history books and gunfire. But it is a story that Zena Husman first heard from her grandmother Stella Webb Kirtley. Even before Stella told her the story, Zena knew every detail just by looking at the pain in her grandmother’s eyes.

“I only knew Marston through my grandmother Stella’s eyes,” Zena said. “She would go to her closet in her bedroom, and she’d bring out all the family pictures and Marston’s letters, which had been read over many times. … She and my dad, Locke, Marston’s older brother, always had hope that he might return and just walk through the doorway one day unexpectedly.”

Stella’s wish was finally granted on June 29. Marston – long missing in action after the Battle of Chosin Reservoir in the Korean War – returned to his hometown on June 29 to be buried – nearly 69 years after he last set foot in Kaycee.

Marston Kirtley was born on March 5, 1929, to Ura Omer Kirtley and Stella Webb Kirtley. He was the youngest of six children, and the family owned a log house on a small sheep ranch on the Antelope Basin, about 7 miles northwest of Kaycee. Marston graduated from Johnson County High School in the late 1940s.

According to Zena, his niece, Marston enjoyed the Kaycee area through fishing, hunting and skiing on his homemade skis.

“I was told that Marston, while visiting a neighbor in a ranch nearby, looked around the countryside and was assessing the beauty… and he said ‘This is truly a place worth fighting for,’” Zena said. “At just 20 years of age, he loved Wyoming and was willing to make the ultimate sacrifice for it. “

As Marston was enjoying the simple life in Kaycee, war was brewing.

Under the leadership of the first North Korean Supreme Leader Kim Il-Sung, the People’s Army of Korea believed that it had weakened the South Korean army to a point that North Korea could invade and dominate the southern forces.

At dawn on Sunday, June 25, 1950, the People’s Army crossed the border of the 38th parallel. Just two days later, the South Korean capital of Seoul had fallen to the enemy.

The Cold War was in its infancy, and with the Communists’ recent victory in the Chinese Civil War and the constant threat of Soviet Union involvement, the United States and its allies in the United Nations passed Resolution 82, which allowed the U.N. to give material and troops to aid South Korea.

Thinking he could bring a swift end to the conflict, President Harry S. Truman selected Gen. Douglas MacArthur, supreme commander of the Allied Powers, to lead the campaign.

On Sept. 16, 1950, using 261 naval vessels and 75,000 troops, MacArthur landed at Inchon, South Korea. U.N. forces successfully cut off North Korean units. MacArthur then began his drive over the 38th parallel and into North Korea. MacArthur’s goal was to take all of Korea in one campaign. U.N. forces fought to reach the border of North Korea and China on the Yalu River.

“The boys will be home by Christmas,” MacArthur told his commanders.

Marston enlisted in the U.S. Army on Feb. 24, 1950. In late November of that same year, he was assigned to Battery A, 57th Field Artillery Battalion, 31st Regimental Combat Team, 7th Infantry Division.

By the time Marston received his assignment, the U.N. forces had fought the People’s Army back into the mountainous regions of North Korea.

The U.S. Marines had reached the Chosin Reservoir.

The Marines moved north along the western edge of the Chosin Reservoir and the regimental combat team moved up the eastern edge into mountainous terrain.

With the threat of U.S. troops on his doorstep, Chairman Mao Zedong, leader of the Communist Party in China, began to move soldiers – under the cover of night – into the valleys and drainages of North Korea. Unknown to U.S. forces, Chinese military leaders had surrounded the reservoir with approximately 120,000 soldiers. The Marines, along with Marston and his unit, the RCT-31, were surrounded and outgunned. The battle raged from Nov. 27 through Dec. 13.

Locke Kirtley, brother of Marston and father of Zena, was also serving in the war, along the border of Manchuria at the time. Word of the battle at Chosin arrived quickly and Locke recounted the story of the battle in a letter reprinted in full in the March 15, 1951, Buffalo Bulletin.

“The Chinese attacked with thousands of troops, some without weapons and some with,” Locke wrote. “The 31st was forced back and without apparently telling the field artillery anything about it. Anyway the infantry moved right through the 57th and left them stranded high and dry. The gunners started firing point blank at the wall of Chinese that couldn’t be stopped. They overran their positions and turned our guns on the retreating GI’s. After reforming, the GI’s counter-attacked and recaptured the guns, only to be driven off again.

“Once more they attacked and again recaptured their own guns, but this time the Chinese really came in force and after being driven off the third time, decided the guns would just have to be left. Then came the retreat of Hamhung and its later evacuation. … I have no idea of how many casualties we had in the Chosin Reservoir area, but as an estimation I would say around five or six thousand. Two whole battalions were wiped out and the two or maybe three FA batteries of the 57th.”

Locke’s estimates were low. The U.S. X Corps and the Republic of Korea’s I Corps reported 10,495 battle casualties: 4,385 U.S. Marines, 3,163 U.S. Army personnel and 2,812 South Koreans that had been attached to American formations.

Marston was one of the casualties, although it is still unknown when and how he died, according to Zena. What is known is that, at some point near the time of his death, he broke his left leg and foot. Israel Samuels, a member of Marston’s unit, later told Stella that he saw Marston, wounded but walking, at sunset on Dec. 1. This is the last reported sighting of him.

For years, that was the end of the story. This was the end that Locke knew. Stella and Ura knew it too. A life gone too soon in defense of his country.

Marston’s remains were never found, and the family held a small memorial service. His gravestone is in the Kaycee Cemetery next to the remains of Locke, his parents and another brother who died in infancy.

But as the Kirtleys mourned Marston, others hundreds of miles away were working to bring him home.

After the cease-fire in 1954, the U.N., the North Korean People’s Army and the Chinese People’s Volunteer Forces agreed to exchange remains of those who had fallen in the conflict. This agreement became known as Operation Glory.

With the exchange, the U.N. received the remains of over 4,000 individuals. Those that could not be identified were sent to the National Memorial Cemetery of the Pacific in Honolulu for burial as “Unknowns.”

But Marston’s body – marked as X-15900 Operation Glory – was disinterred in May 2017 with other Chosin dead. As medical science progressed, the use of mitochondrial DNA became available to identify the remains of the unknowns. DNA from Marston’s right leg was compared to a sample given by Locke years before. It was a match.

In May 2018, Zena and her sister, Karmen, were notified that Marston had been identified and they started preparations for their uncle’s homecoming.

Marston’s remains were flown from Hawaii to Billings, Montana, on June 27 and escorted by the Patriot Guard Riders – first to Kane Funeral Home in Sheridan, where there was a public viewing on June 28, and then to Harold Jarrard Park in Kaycee, where his funeral was held on June 29.

Hundreds, some from as far away as Iowa, came out to support her uncle through every step of the journey from Billings to Kaycee, Zena said.

“I know my grandmother and Marston’s two sisters and my dad (Locke)… would feel forever grateful to everyone who participated in these memorable events,” Zena said at the service. “It has made me feel that Marston’s short life on this earth was not in vain if just a few people are influenced by Marston’s dedication to his country and they too believe that freedom and the American life are worth living and dying for.”

Gov. Mark Gordon was among the hundreds in attendance at the memorial service.

“These were men of special character who make me proud to be an American, and it is right that we recognize their valor and that we welcome Cpl. Kirtley, who has finally come home to a grateful community, a grateful state and a grateful nation,” Gordon said.

And so the story ends, in the same rolling hills where it began. On June 29, a bugle sounded taps, the flag was folded, and Marston Kirtley’s soul was commended to God.

“Thank you for your service, Marston,” Zena said. “It is once again time for you to belong to a time of peace and happiness. You are home now where you belong – where you were loved all these years, where you were meant to be and where you will never be forgotten. Rest now, Marston. And welcome home.”

With additional reporting by Floyd Whiting