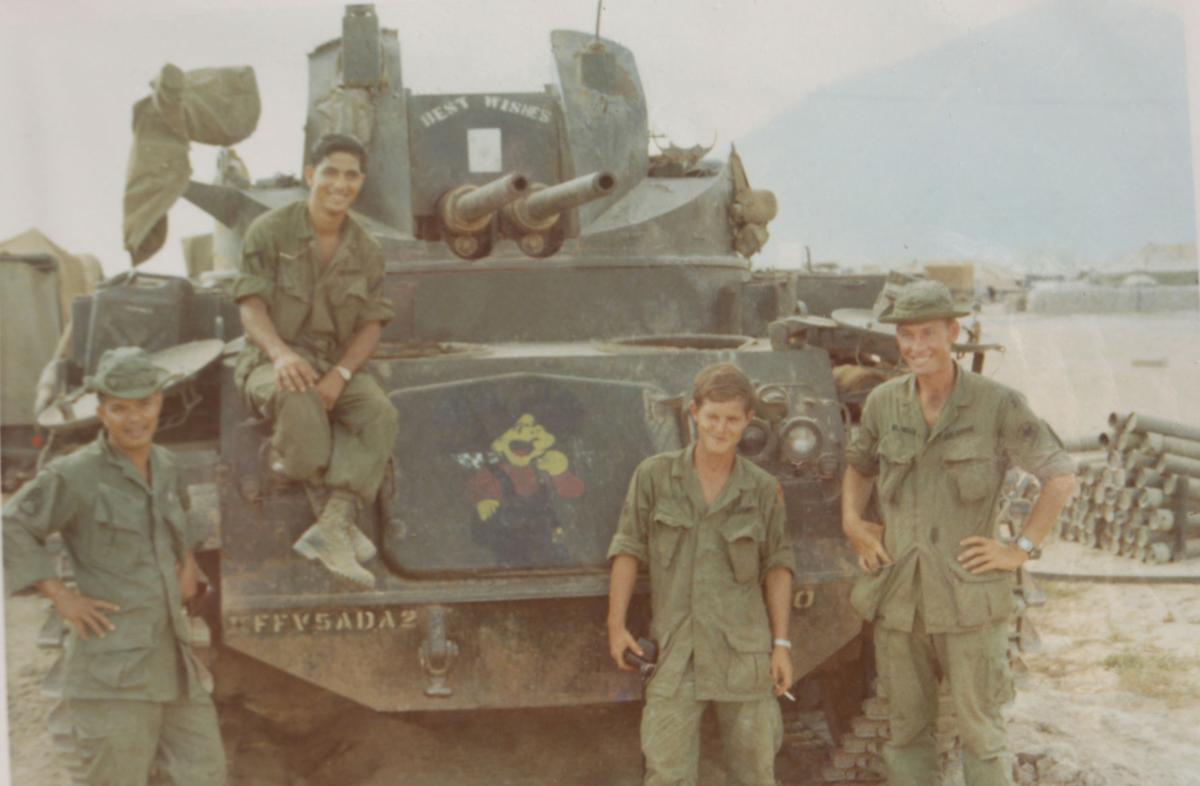 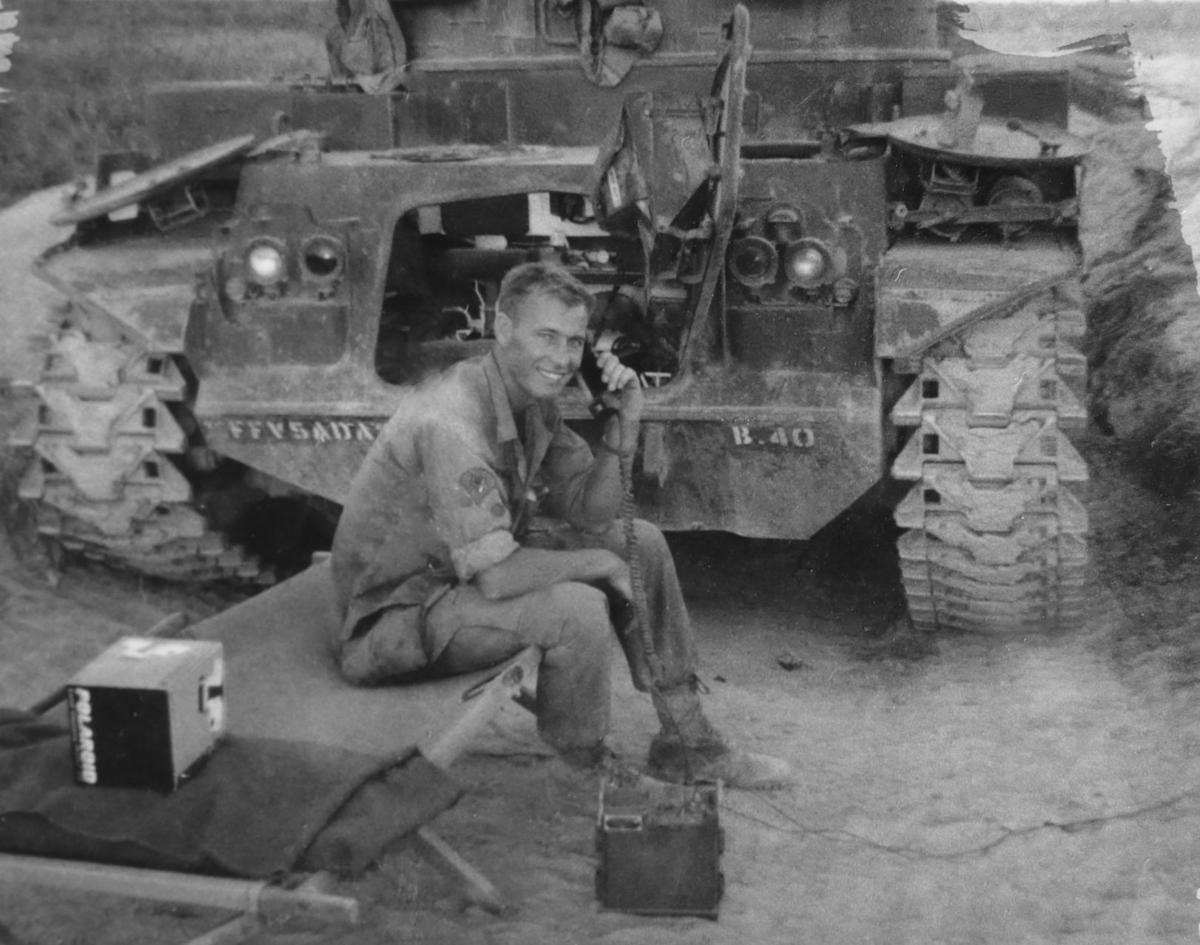 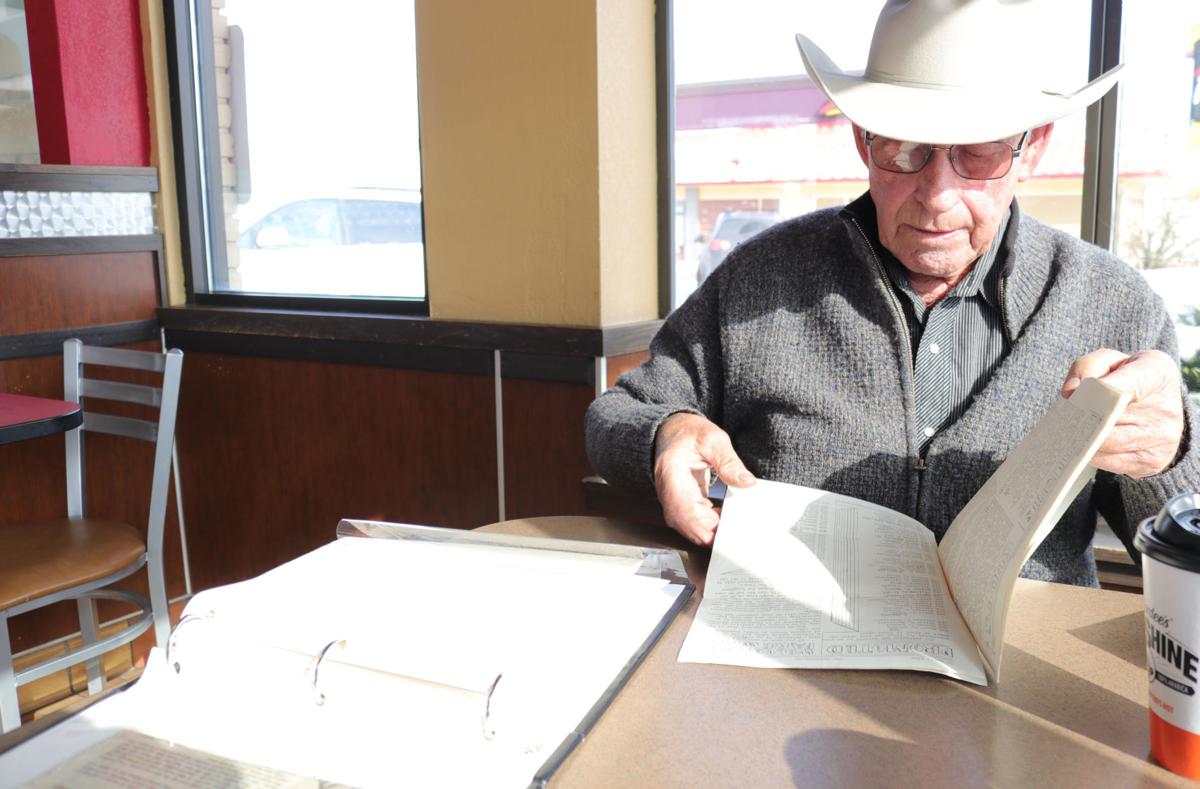 Now 78 years old, Arlis Wayne Bolinger looks at his promotion paperwork while going through his Vietnam photo album. Bolinger was in Vietnam for a year, fulfilling his obligation to the draft. Through the years, he has kept an engraved Zippo lighter, his dog tags and even a 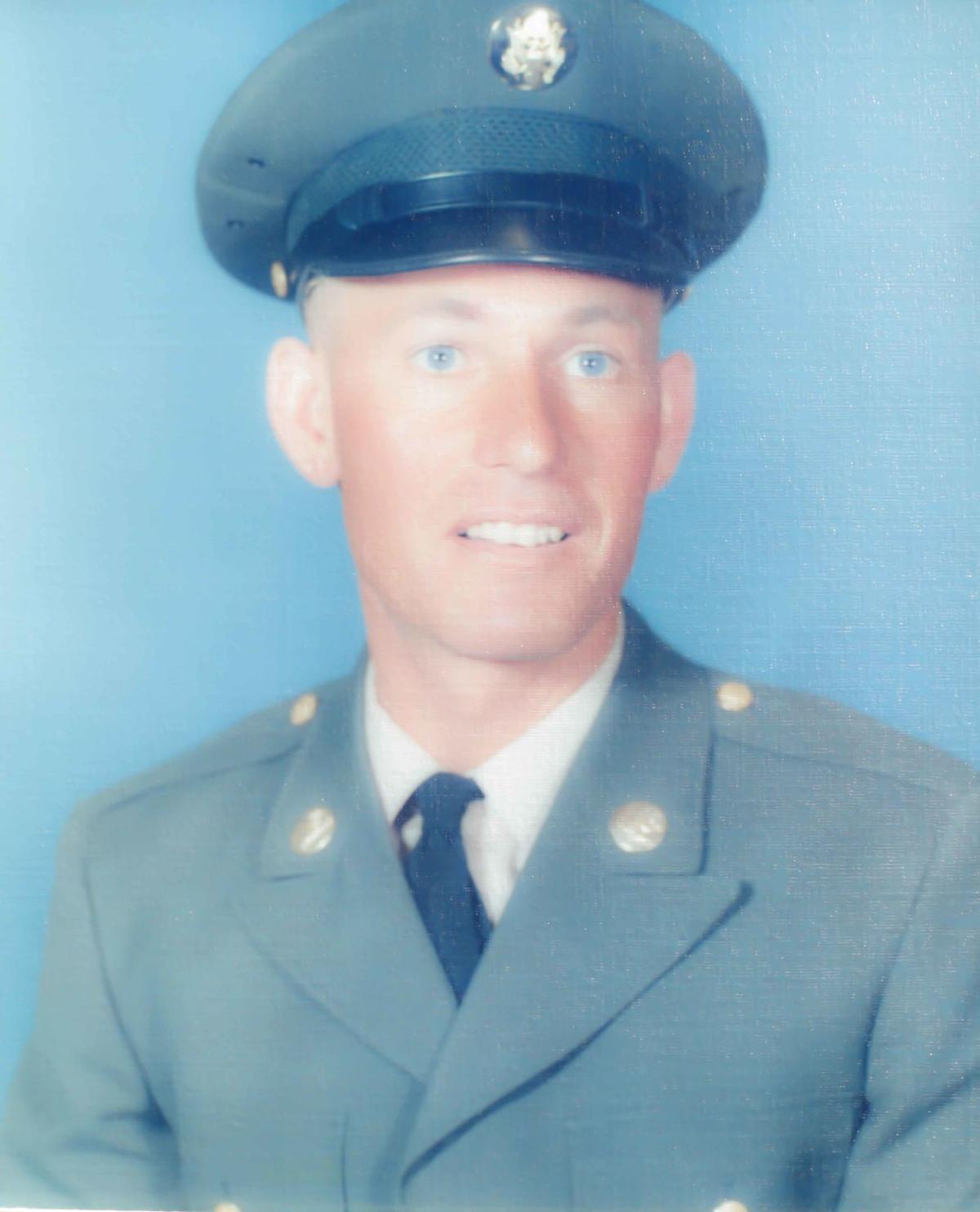 Sgt. Arlis Wayne Bolinger talked with his soldiers while pulling security over an open field in Vietnam in 1968. They had been “in country” for months, some for almost a year.

He and his soldiers sat on and among their dusters – tracked armored vehicles armed with two 40 mm cannons and an M60 machine gun. The jungle of Vietnam was quiet when they saw a truck pull out of the wood line.

Before they could receive permission to open fire, the truck, armed with a rocket system on the bed, began to fire.

Rockets screamed from the truck into the open and began to land and explode among the dusters and Bolinger’s troops. Diving for cover, they tried protecting themselves from shrapnel. The noise was deafening as the rockets exploded. All the men could do was cover their heads and hope: hope to make it through the night, hope to make it home as the world seemed to burn around them.

Among the sounds of falling dirt and rock, Bolinger checked himself; he was alive and uninjured. The truck had run back into the wood line, its ammo exhausted.

Next he checked his men; they were all accounted for and, against all odds, uninjured. Finally, Bolinger checked the equipment; it was undamaged.

Six to eight North Vietnamese rockets fell among the men and their equipment that day; they exploded as designed and hit nothing.

Bolinger was born Aug. 20, 1941, close to Marble, Arkansas, to Preston and Nina Bolinger.

Preston had once been afflicted with malaria. To help him recover from his disease, he had traveled to the dry air of Wyoming.

Preston made a full recovery in a short time but fell in love with the state that had saved his life. When he married Nina on March 18, 1935, he moved her to Kaycee.

They worked as ranch hands and raised their three sons with the values of the time: honesty, hard work and service.

The family settled in Buffalo in 1942, eventually becoming sharecroppers.

Growing up with two brothers in the country with horses offered plenty for the active boys to do.

“It was always interesting to me,” Bolinger said. “There was always something happening or going on, and we had the creek right there. We could swim in it in the summer time. Just like any kid, you have fun wherever you are.”

It was a classic Wyoming upbringing. The kids learned to ride horses before they started school. He and his brothers would watch Duffy’s Bluff (Buffalo’s train) roll into town.

“We would put pennies up on the track, and it would run them flat,” Bolinger said. “All the kids did that.”

But Bolinger’s favorite way to pass the time as a child was riding his horse.

“I did a lot of horseback riding when I was a kid. Just going and riding,” Bolinger said.

While most Americans were busy living and building the American dream, a conflict was developing in Southeast Asia. Political tensions had been building in the small country of Vietnam. The North Vietnamese leader Ho Chi Minh had brought together many socialist groups and declared independence from French Indochina in 1945. Eventually, the Central Intelligence Agency filed the “Consequences to the U.S. of Communist Domination of Mainland Southeast Asia” report. This document, along with other intelligence reports, fueled the belief at the time that should one small southeast Asian nation fall to the communist government, it would eventually cause communism to rise in all of Indochina, according to the Department of State website on the history of the Vietnam War.

President Dwight D. Eisenhower spoke of the fear he called the “domino theory.” At a governors’ conference in Seattle, Eisenhower warned the delegation that the situation had become “very ominous for the United States.”

The United States officially deployed troops to the area in 1965, but U.S. military advisers had been on the ground for much longer.

Arlis’ brother Bill joined the U.S. Air Force and was the first Bolinger brother to serve his country. The U.S. government had learned a hard lesson during World War II after drafting, or allowing to enlist, entire families of young men.

“My brother went into the Air Force,” Bolinger said. “He went in ’62, and he didn’t get out until ’66. We were buying a ranch, out on Crazy Woman, south of town, so I had a deferment, that they wouldn’t call me up until my brother got out and came home to help on the ranch while I went.”

Bolinger was called up less than one month after Bill returned home. He was drafted into the U.S. Army, labeled 1-A, healthy and able bodied.

“They were wanting me before that; I was labeled 1-A all the time,” Bolinger said. “But I had the deferment.”

He was shipped to Fort Bliss, Texas. There he went through basic training and advanced individual training, where he learned to perform his specific duty.

Bolinger showed strong leadership skills and scored the highest in his class on his aptitude test, enough to cause the U.S. Army to send him to a leadership course after he completed his basic training.

“I got through basic and thought I was starting AIT, but they jerked me out of there and sent me to the drill sergeant school for a leadership preparatory course,” Bolinger said.

Once he was finished with the course, the Army returned him to AIT, but it wasn’t long before another set of orders arrived.

“I never got through AIT,” Bolinger said. “I only got about halfway through and then I got orders for Vietnam.”

Bolinger was assigned to the 25th Infantry Division, 5th of the 2nd Artillery, Air Defense Artillery, as a crewmember on an M42 self-propelled anti-aircraft gun.

The M42 was a large up-armored tracked vehicle, armed with twin M2A1 40 mm cannons, which fired 120 rounds per minute from each barrel.

“But we never shot at any planes,” Bolinger said.

To the men who served aboard them and to the infantry they protected, the M42s were known as dusters due to the large clouds of dust they produced on the dirt roads of Vietnam.

The North Vietnamese Army and the Viet Cong called them “Fire Dragons” due to the flaming burst and high rate of fire, according to armyhistory.org.

A 40 mm round is as long as a full-grown man’s forearm; the projectile itself is larger than a standard soda can. The weapon was designed to take down enemy aircraft; in Vietnam the guns were used against personnel and any vehicles the North Vietnamese Army could muster.

Dusters were used as support for the U.S. Infantry and artillery. The crews lowered the 40 mm canons from the sky to the horizon and provided cover fire for the Army’s ground forces.

When Bolinger arrived in South Vietnam, he disembarked the plane on an airfield downwind from the barrels used to burn feces.

Bolinger spent three weeks based in his headquarters to acclimatize. He was then assigned to replace the driver of a duster that had finished his tour in Vietnam.

“I started over on the plane to Vietnam as a private, E-1,” Bolinger said. “When my feet touched the ground over there I was a PFC (private first class, E-3), automatically.”

In less than a month, Bolinger was promoted to specialist, E-4.

“I drove it for maybe two and a half months, and the squad leader was going to rotate. They nominated me for the job,” Bolinger said. “I didn’t even know anything about it. But when he rotated, they made me squad leader and that made me a sergeant (E-5).”

On his one-year anniversary with the Army, he was tasked to lead a section of troops, approximately 16 soldiers.

“Just acting, I wasn’t getting paid for it,” Bolinger said.

The U.S. Army required a soldier to be enlisted for 15 months before he could be promoted to sergeant. He would fill the “slot” but be paid as an E-4. Bolinger did the job, regardless. He was finally pinned as an E-5, but again performed the job above him, taking the duties of an E-6.

“So that put me in charge of two squads, or two tracks,” Bolinger said. “And here I was just a dumb ol’ country boy.”

Bolinger doesn’t talk openly about the small-arms firefights, but they were frequent.

The primary mission of Bolinger’s platoon was to provide cover for artillery as they provided watch cover for infantrymen performing sweeping patrols.

“When infantry would go out on a sweep, they would detail a battery of artillery to go out some damn place in the boonies and be close enough they could support them with fire while they performed their sweep,” Bolinger said.

“Whenever they (Viet Cong) did their sneak attacks, it was always at night,” Bolinger said.

Tracer rounds from the Russian made AK-47 and AK-50 would fill the night with green streaks. Bolinger’s dusters were attacked with rocket-propelled grenades, small-arms fire and emplaced mines. Each time, Bolinger and his troops would beat them back.

“They had green tracers,” Bolinger said. “That’s how you knew, ’cause the U.S. tracers were red.”

Bolinger was deployed to Vietnam for exactly one year. He had fulfilled the terms of his draft contract.

In an attempt to keep him, the Army offered to promote Bolinger to the E-6 staff sergeant rank that he had been performing if he would voluntarily extend his service.

Bolinger returned home to Wyoming. He never witnessed the protesters that many of the Vietnam veterans were greeted with upon their return.

“We never faced any problems,” Bolinger said. “But later, I heard they (protesters) were spitting on them (soldiers), and every damn thing in different places.”

Bolinger returned to ranch life. He was even allowed to leave three months early from active duty so he could help his father build a sheep shed. Bolinger never married. He never had any children. He doesn’t know why, he said. It was something he never found the time to do.

Bolinger went on to run the family ranch, becoming equal partners with his parents and expanding.

In 1996, the family sold the ranch and relocated north of Buffalo. He enjoyed breaking workhorses, something he still does at the age of 78.

“The last two years I haven’t done as much as I did,” Bolinger said. “Now I’m trying to be retired, but all I got was plain tired.”

The VFW and American Legion will host the Veterans Day ceremony with the laying of a wreath at the monument by the VFW Auxiliary. The program will feature a guest speaker.

At the conclusion of the ceremonies, the American Legion will host a community luncheon and open house at the Post 13 home on

Veterans Avenue. The luncheon is free of charge, and all are encouraged to attend.