You are the owner of this article.
Edit Article Add New Article
You have permission to edit this article.
Edit
Home
News
Sports
Profiles
Opinion
Classifieds
Obituaries
Contact Us
Subscribe
e-Edition
Photos
State
Covid-19
1 of 8 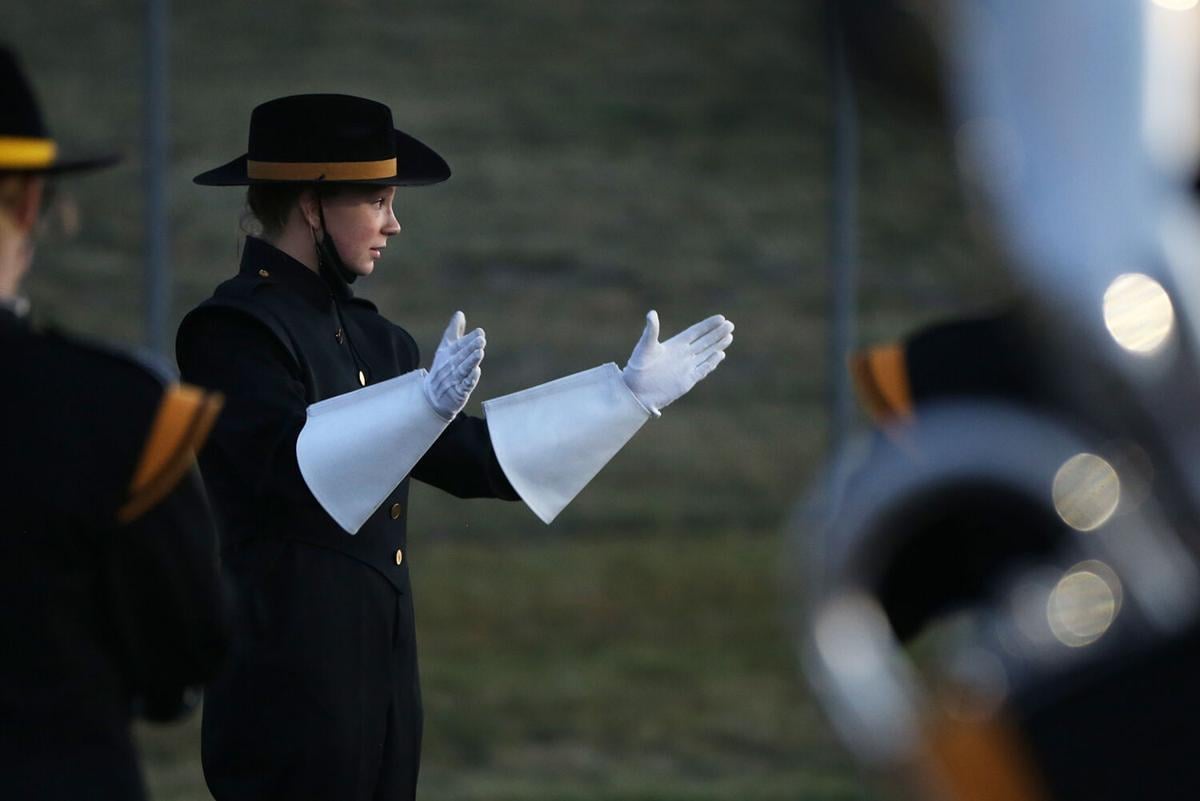 Buffalo High School drum major Makenna Lambert works with fellow drum major Gabe Cahhal-Laudert to lead the band in warmups on Thursday. BHS will record their final performance of the show on Wednesday to send in for review since their will be no in-person performances for state this year. 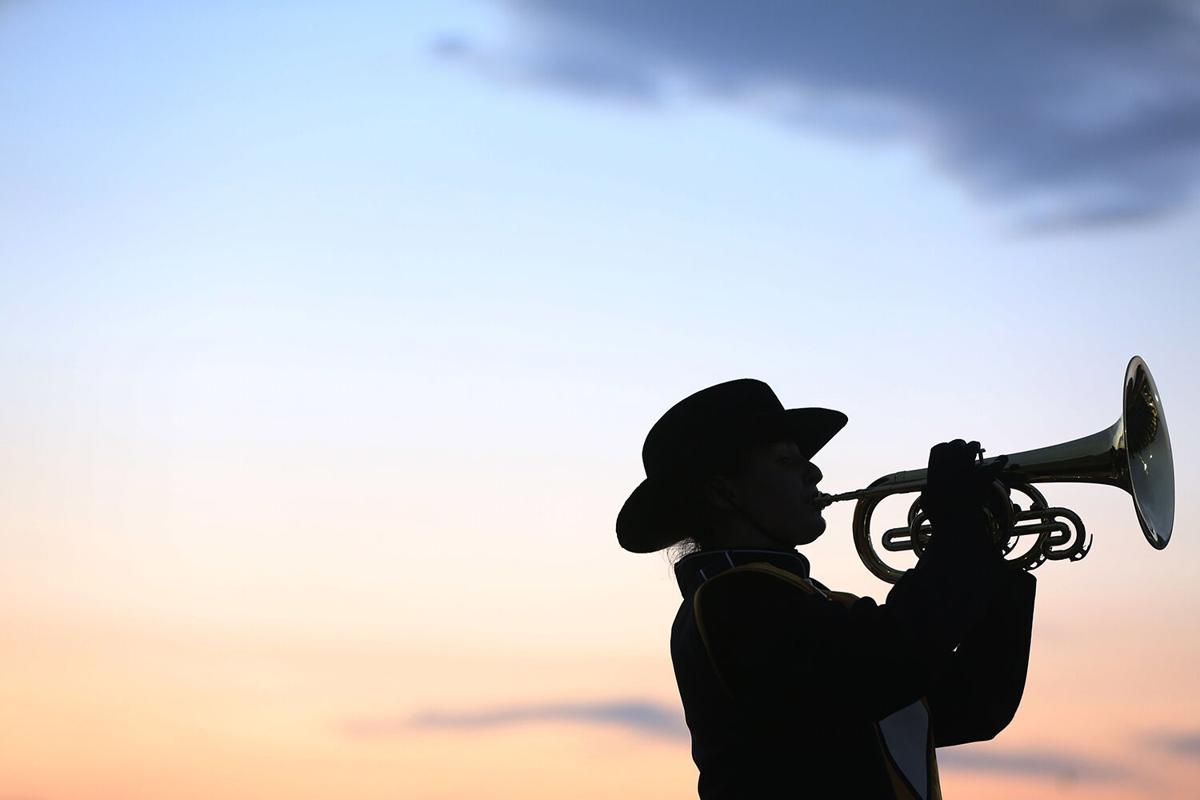 Mellophone Laurel Rozema joins in the warm up scales with the rest of the band on Thursday. Buffalo’s show featured four different movements that depict conspiracy symbols in classified files, the “song and dance” of government spin, a realization that something more exists, and finally the takeover by “Big Brother.” 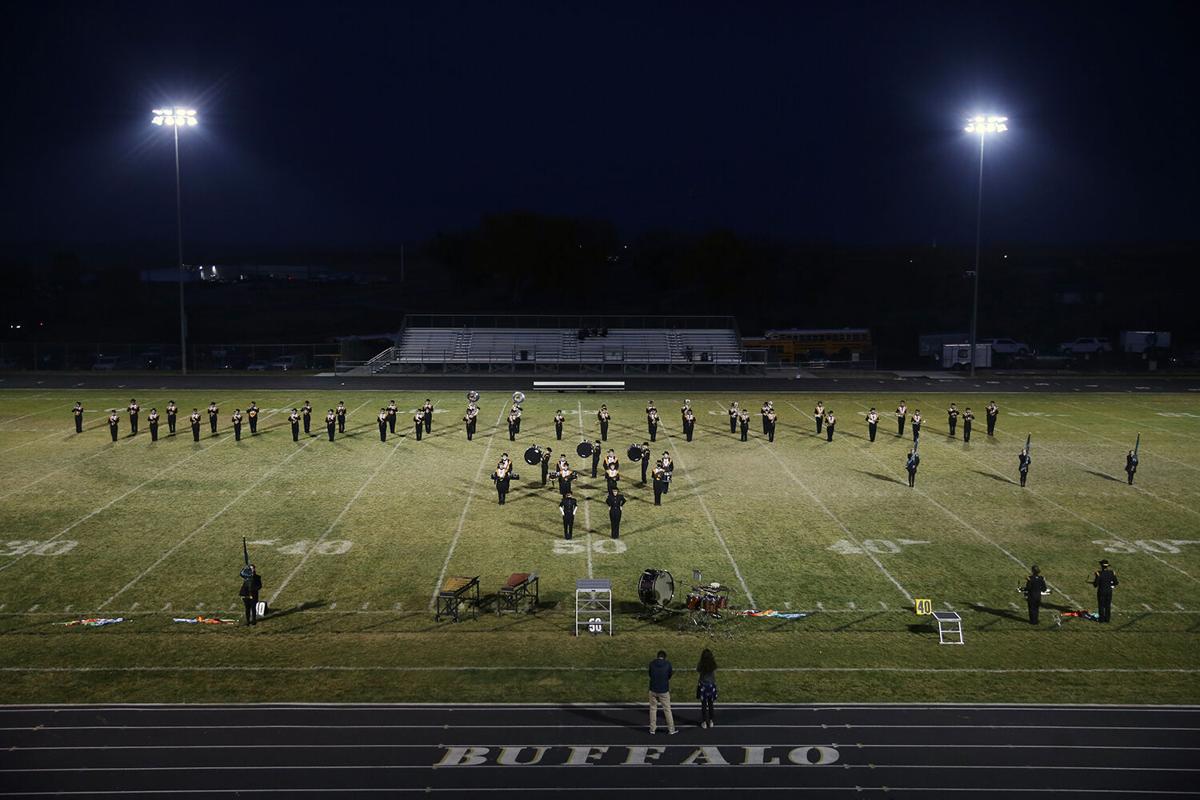 Buffalo High School’s marching band stands at attention in anticipation of their performance on Thursday. The band was the fourth and final performance of the night in this year’s live presentation. 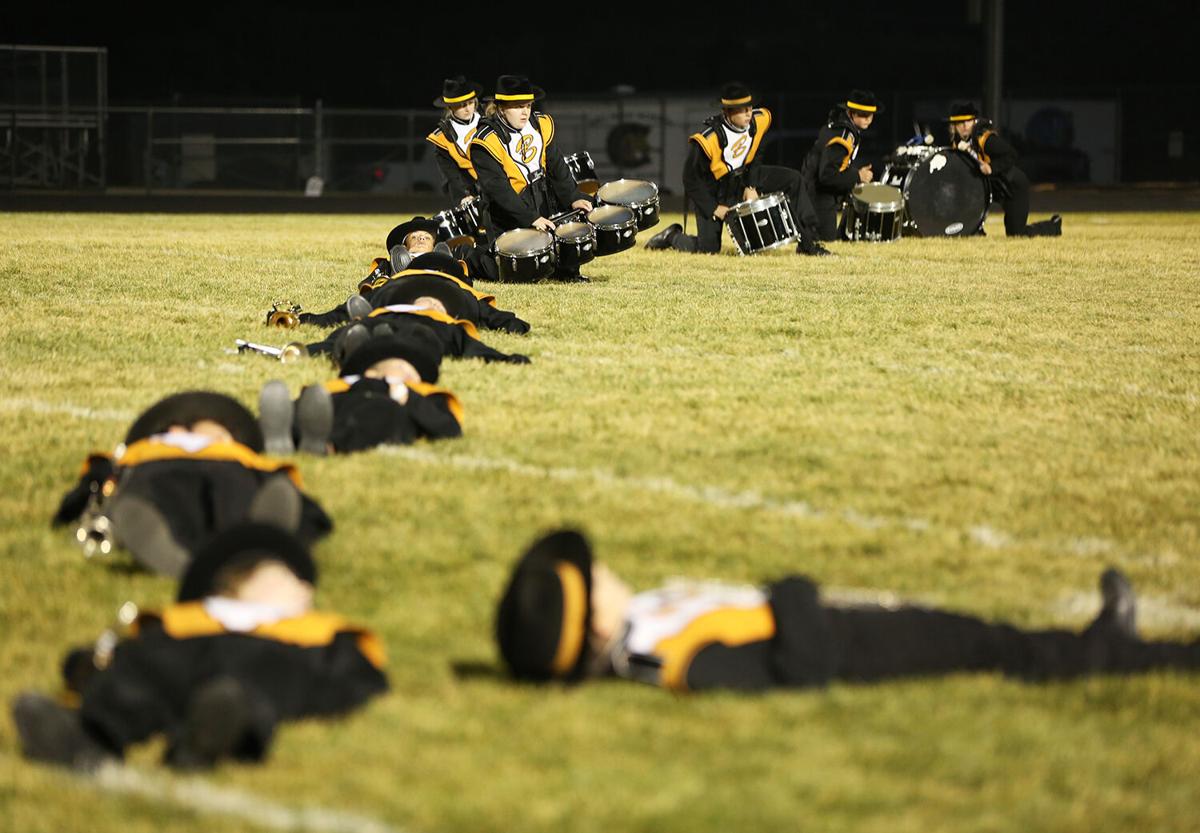 After the first movement, all members of the band that can lay down flat on their backs in a form representing the Illuminati. This marks the end of the first movement which discusses presents conspiracy symbols as a sneak peek into the FBI’s classified files. 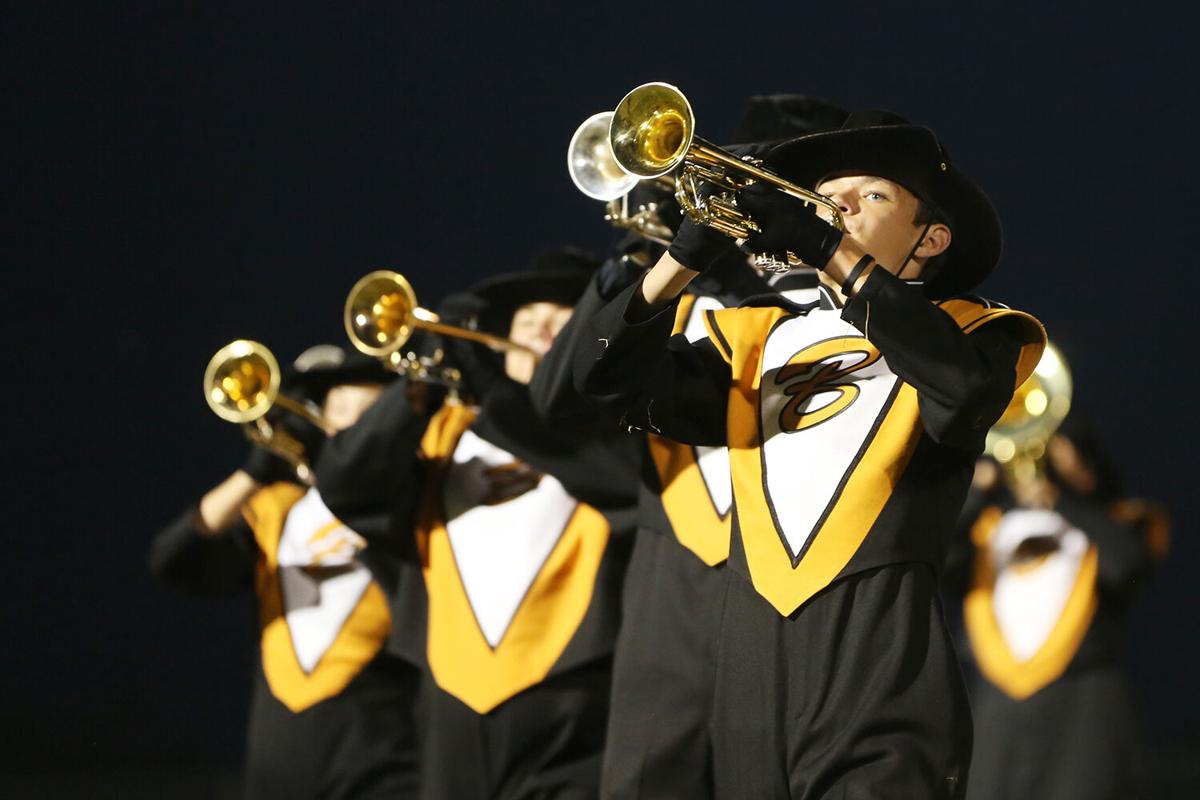 Trumpet Carter Redden stands at the front of the trumpets during the band’s performance of their show “Conspiracy Theory” on Thursday. This was the 8th Annual North Wyoming Marching Invitational at Buffalo High School the live show hosted Cody, Thunder Basin and Campbell County High Schools. 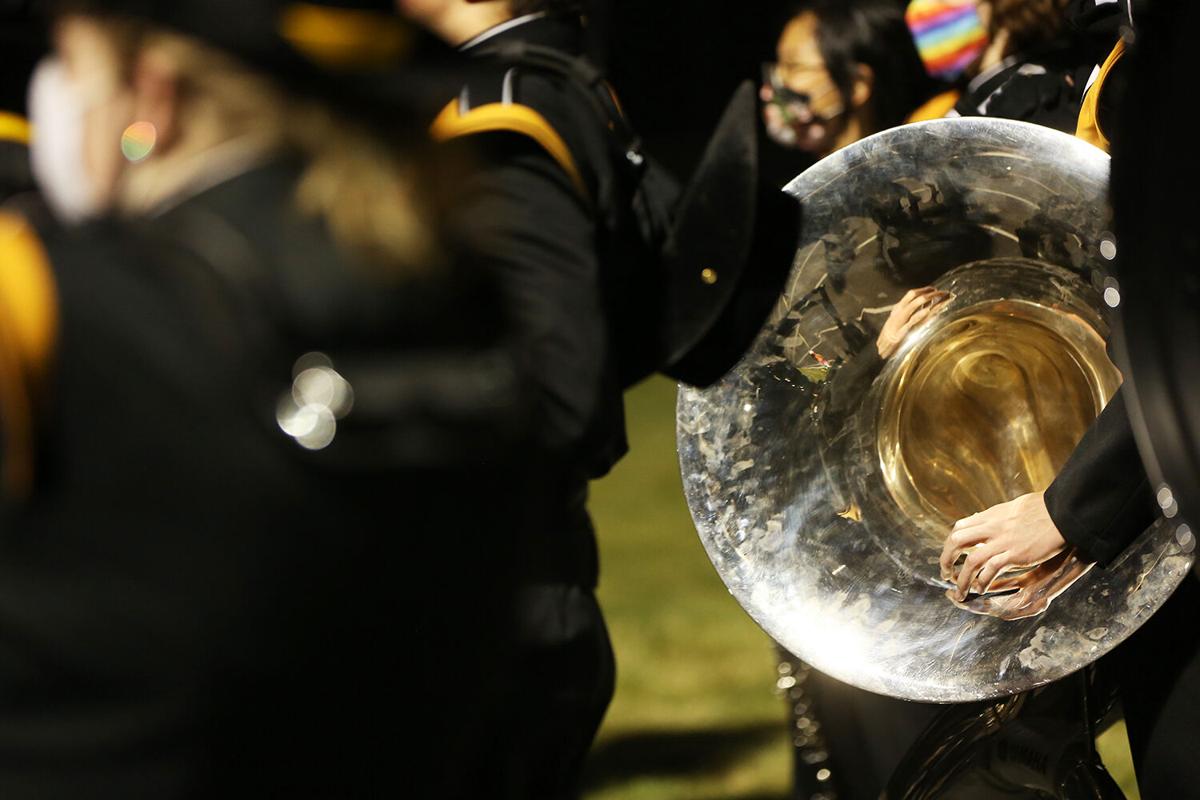 After the conclusion of their performance, each band would join together on the far edge of the field to hear the feedback and ideas provided by the two guest critics on Thursday. While performing masks are not required, but once over and congregated in a circle masks must be put back on. 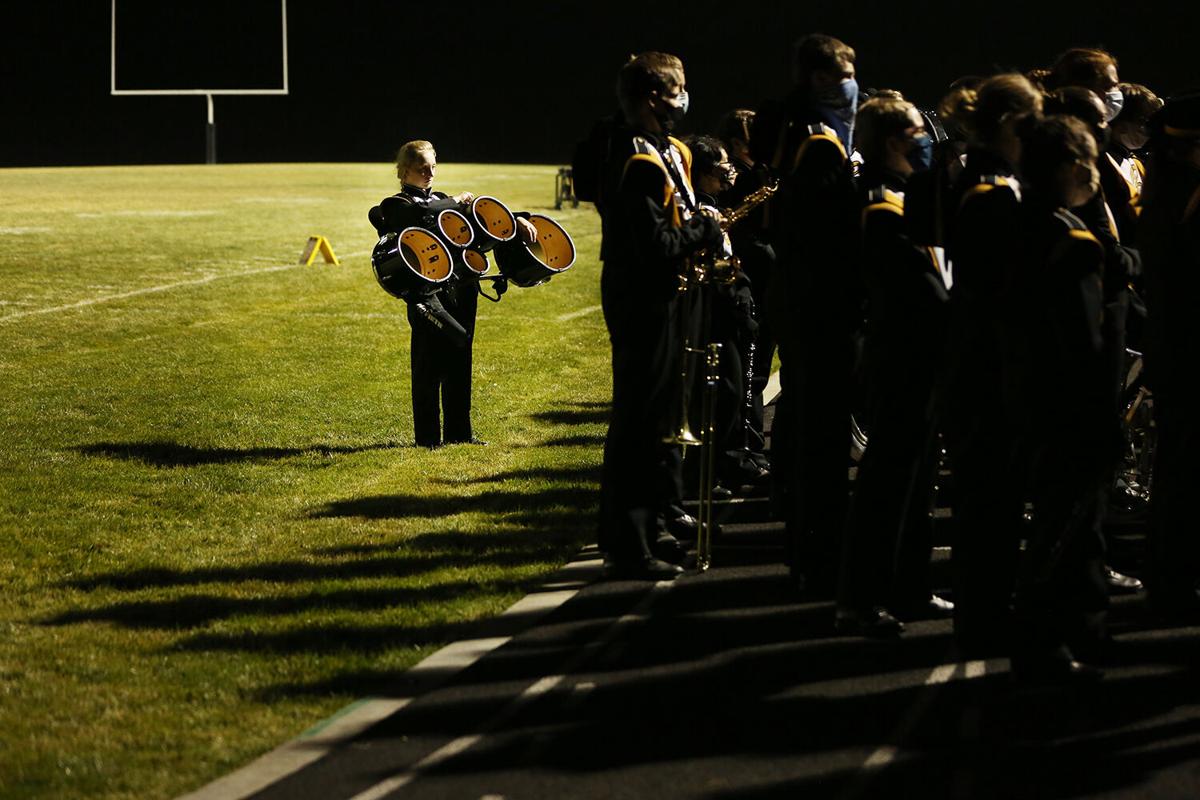 Sage Palser stands behind the band with her quints while they receive feedback from their performance on Thursday. In addition to verbal feedback, more in depth comments are audio recorded and provided to the band for later listening. 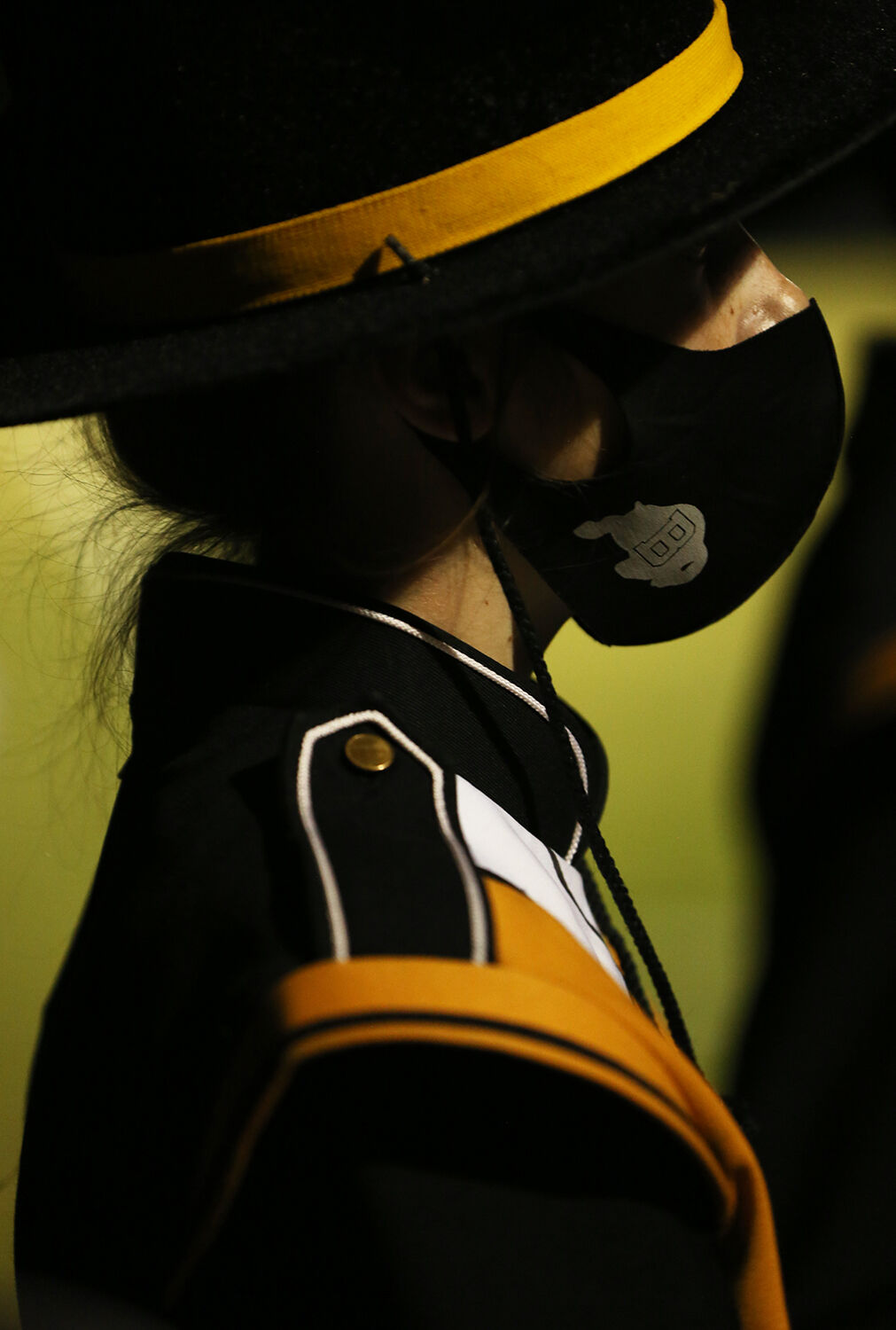 Once huddled together after the performance, band members are required to reapply their masks. Many students had BHS themed masks like the Bison with a B inside it.

Buffalo High School’s marching band hosted the Eighth Annual North Wyoming Marching Invitational to Cody, Thunder Basin and Campbell County High Schools to have an opportunity to perform live for other bands, parents and community members. Buffalo finished the show off as the final performance and received overall good reviews and constructive ideas for improvement from the judges before their final state performance.