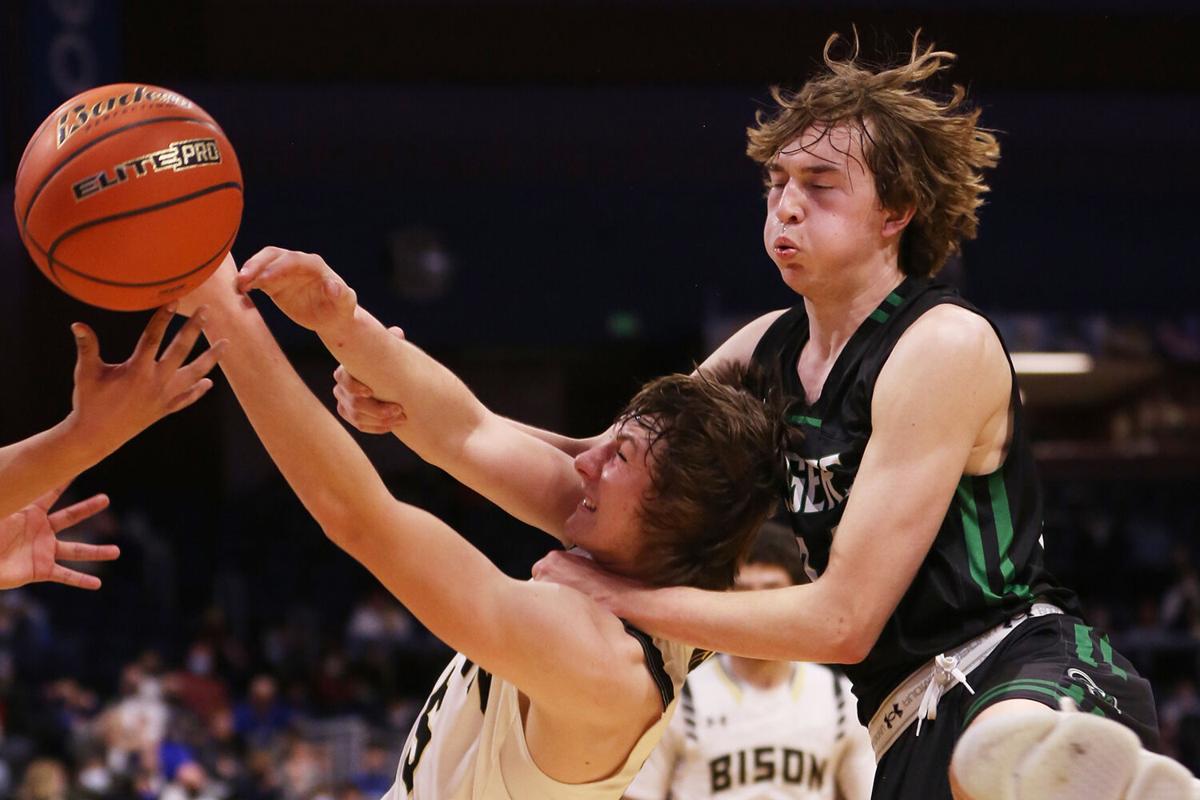 Buffalo High School senior Hunter Stone fights to recover the rebound through the foul by Lander Valley’s Jonas Calvert during the second half on Thursday at the Ford Wyoming Center in Casper. Stone finished the game scoring six for six on free throws and a total of 16 points, making him the highest scorer for the Bison. 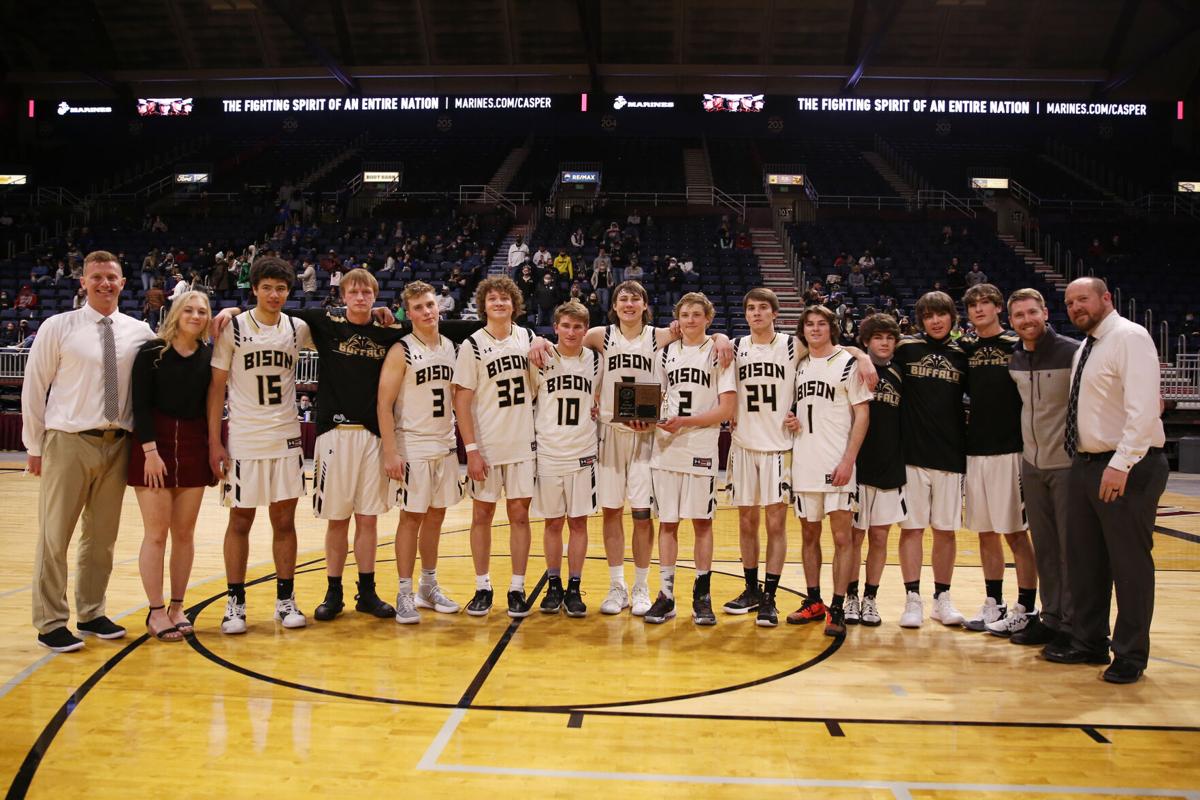 A little more than a year ago, the Buffalo Bison boys basketball team was en route to Casper when their bus was forced to turn around after news the state tournament was canceled due to COVID-19.

And though the 2020-21 season featured various changes — including no traditional tipoff, decreased fan attendance and the wearing of face masks — it got the postseason play it deserved.

For the Bison, that postseason season ended Thursday afternoon with a 62-52 win over No. 3 West Lander Valley to clinch third place at the 3A state tournament.

The Bison’s path to third place featured two close games to start the tournament, with Buffalo earning a 50-47 quarterfinal win over Lyman and falling in a close 52-47 contest to Mountain View in the semifinals.

Against Lander Valley, the Bison got off to a slow start on both ends of the court, falling behind early and forcing coach Tanner Hart to take a quick timeout just two minutes into the game. The timeout, he said, was to fix some defensive positioning issues he had noticed right out of the gate.

“I wanted to handle that really early on so that it wasn’t an issue down the road,” Hart said. “It was something that I felt was important to how we wanted to run the defense, and so we tried to get it right right away.”

Following the timeout, the Bison picked up speed on the offensive end and locked Lander down defensively, tying the game at 7-7 with 3:30 left to play in the quarter.

Solid transition offense and aggressively driving the lane allowed the Bison to up their lead to 15-9 at the first-quarter break. Most Bison scoring came from driving the lane, with the team shooting an uncharacteristically few 3-pointers during the contest.

Hart attributed that lack of 3-pointers to the Bison offense taking what the typically tough Lander press defense gave them.

“That deny man (defense), they force you to get tunnel vision, and I said, ‘We gotta make sure we’re cutting and we’re recutting and we’re moving and we’re driving,’” Hart said. “So I guess the kids just went out there and they saw the openings.”

In the second quarter, the Bison played some of their best basketball of the season, using multiple passes before shooting on nearly every possession and locking down the Lander offense, which didn’t score for just over five and a half minutes. When Lander finally broke its scoring drought with a 3-pointer, the Bison lead was 30-14.

The Bison offense was also firing on all cylinders to end the first half, from successful inbound plays to freshman Eli Patterson to hard drives to the bucket from seniors Kollen Milmine and Taylor Swanston. The Bison eventually led 38-17 at halftime, with eight different players having scored in the first half.

In the locker room, the team focused mainly on tactical changes on defense and the coaches encouraged the Bison to continue playing at the high level they were at. Before heading back to the court, assistant coach Aaron Mines reminded the Bison’s seven seniors to make their final 16 minutes of high school basketball count.

The second half started at a much slower pace, with neither team scoring points until Patterson hit a deep 2 about three minutes into the quarter. The Bison struggled to contain the Lander outside shooters and gave up numerous 3-pointers in the second half, but relentless effort helped them maintain their lead.

“I think it was the way we were able to help each other,” Hart said. “It’s going to take a lot of work and a lot of effort to play against a team like this to try and slow them down.”

The back-and-forth third quarter gave the Bison a 47-30 lead heading into the final eight minutes of play.

In the fourth, the onslaught of 3-pointers continued from Lander. Despite the lead being cut to just 13 points, sharp Bison passing to break the full-court press forced Lander players into fouls that frequently sent the Bison to the free-throw line. At the line, the Bison outscored Lander by 17 points in the game.

When the final buzzer sounded, the Bison walked off the court with a 62-52 victory and yet another state tournament trophy to add to the shelf. The team was led in scoring by senior Hunter Stone with 16 points and 13 rebounds, with Patterson contributing 15 points. All seven seniors on the roster played seven or more minutes and contributed at least two points, with Hart saying after the game that their progression helped propel the Bison to the third-place finish.

“It’s a group that you fall in love with,” he said. “I coached them when they were freshmen and then I coached them last year and this year, and so you build those relationships and attachments to kids, and you couldn’t be more proud of them. I’m super excited and happy for them to go out with a win.”

3A basketball all-state and all-conference honors