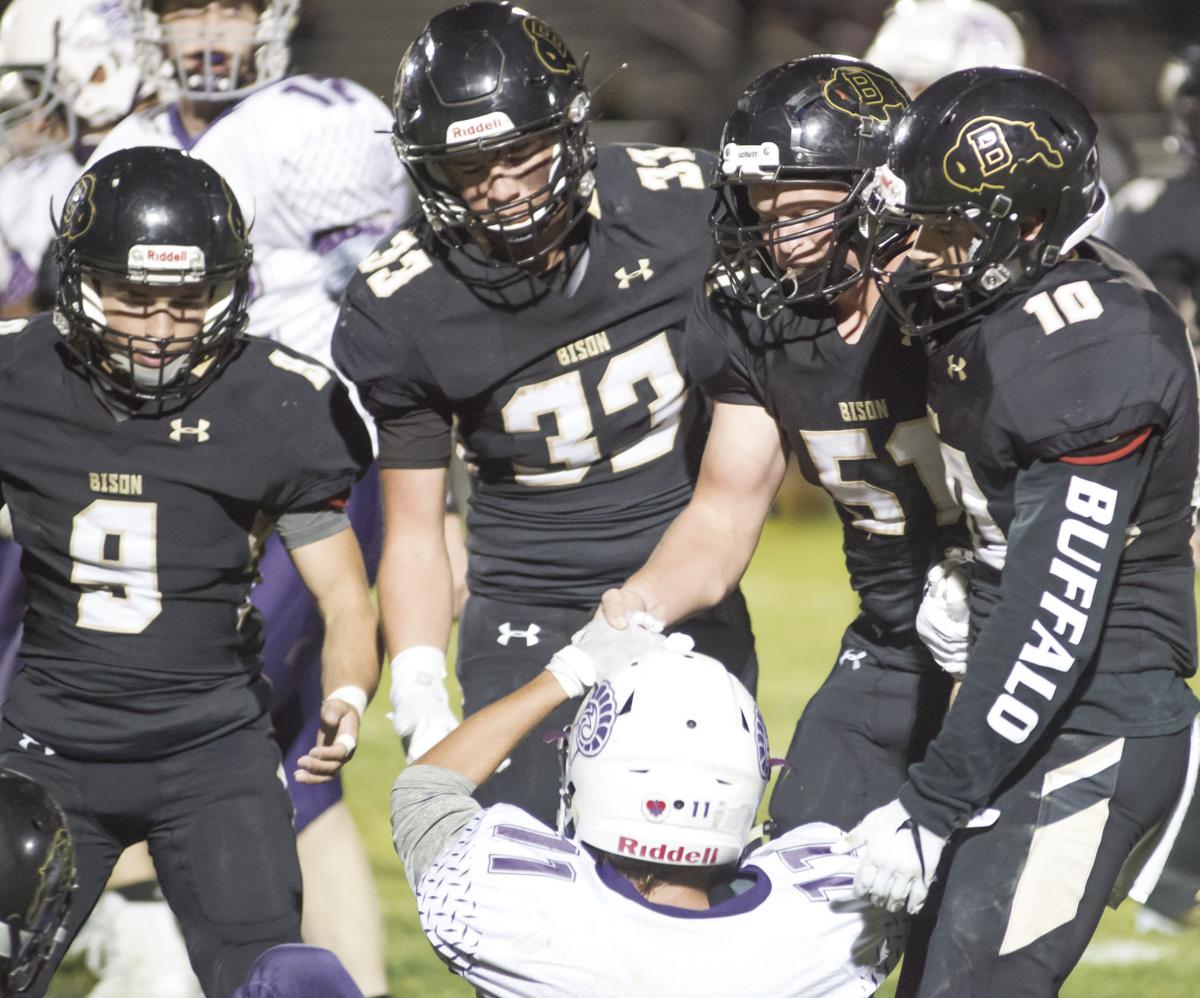 Dallas Lopez, Jace Skovgard, Anthony Graves and Dakota Lopez all lend a hand to Dawson Blaylock after a short gain Friday night at Mike Moon Field. A dangerous Glenrock triple option offense was held in check by a stingy Bison defense that controlled the line of scrimmage. 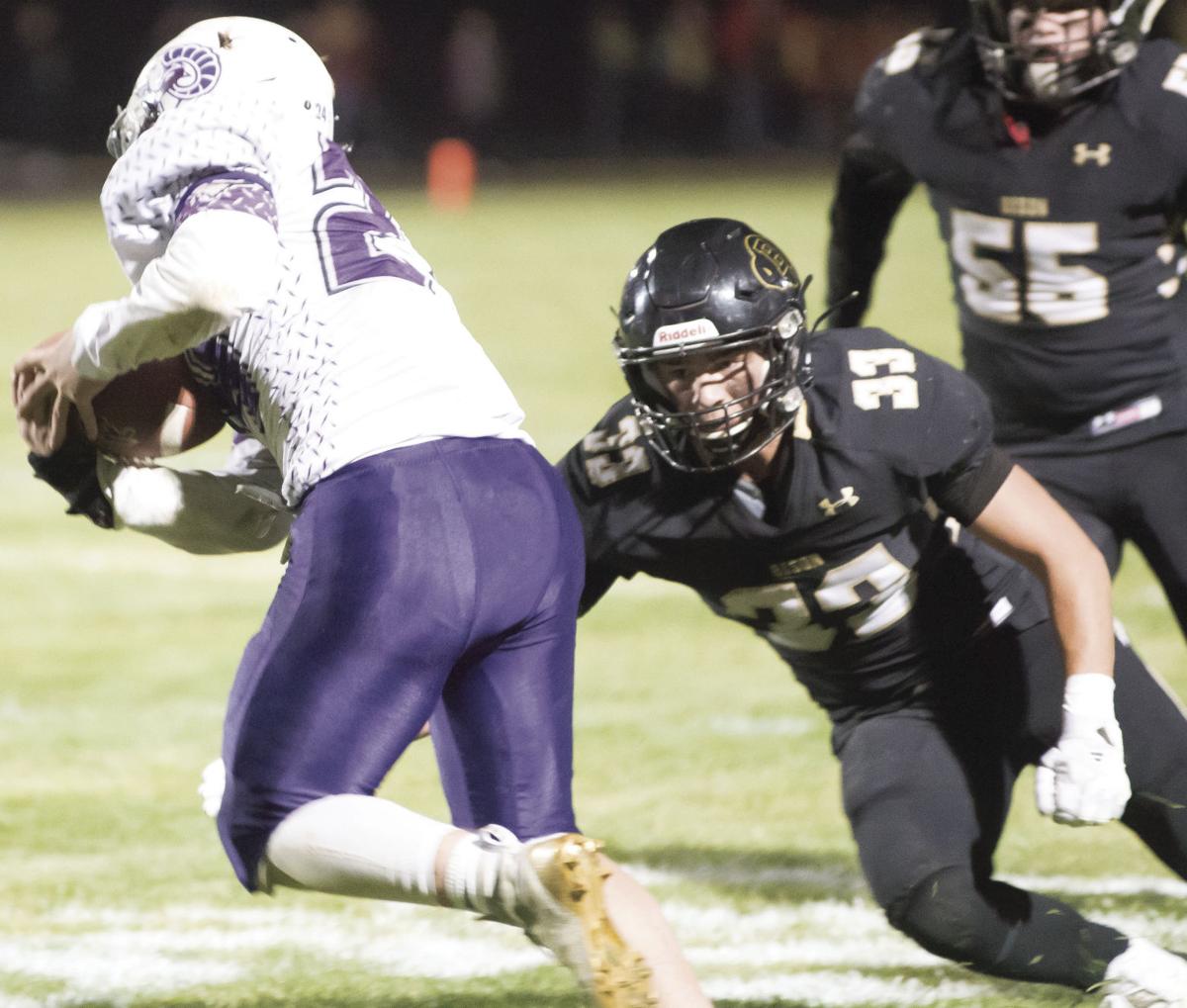 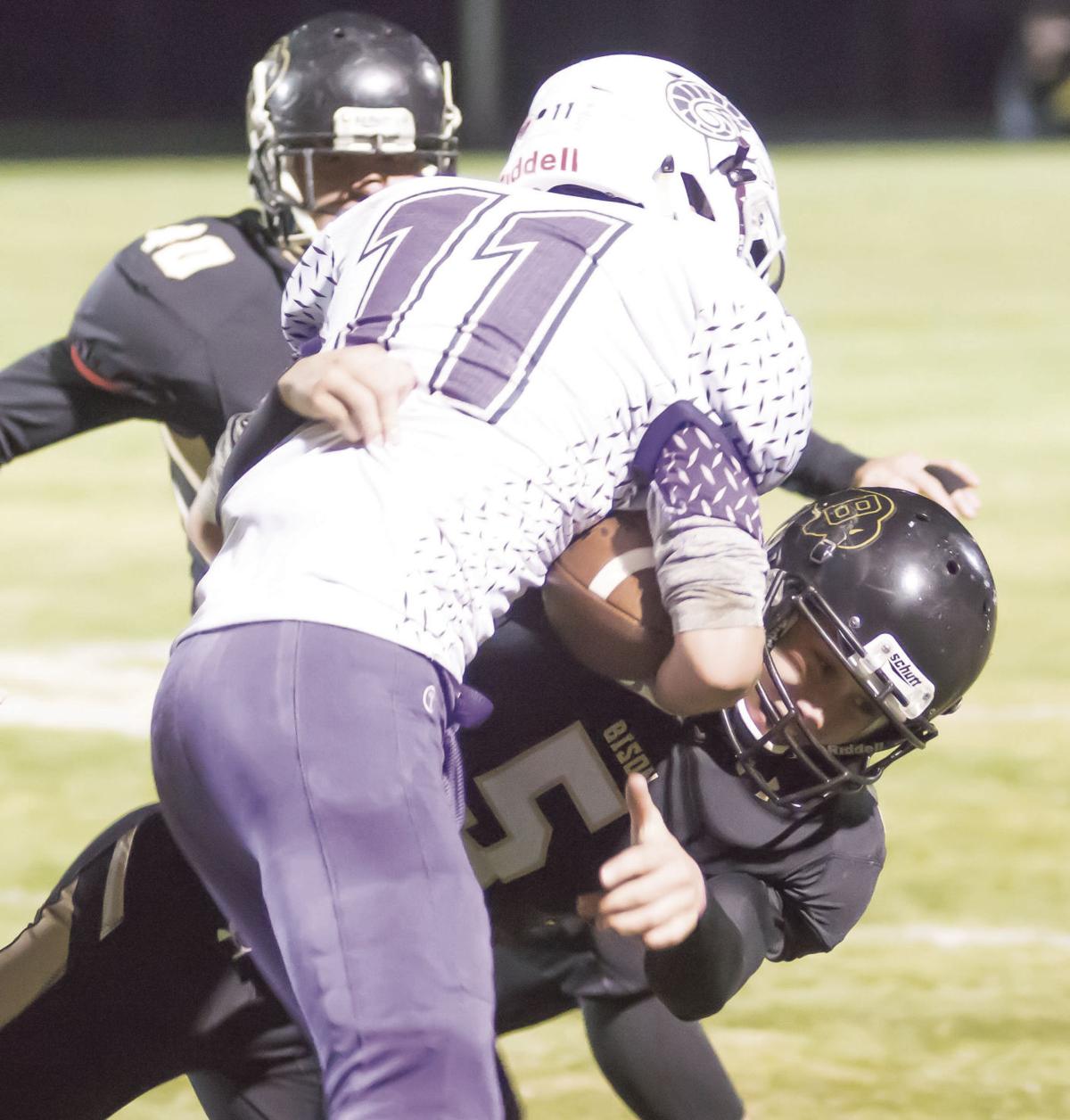 Dallas Lopez, Jace Skovgard, Anthony Graves and Dakota Lopez all lend a hand to Dawson Blaylock after a short gain Friday night at Mike Moon Field. A dangerous Glenrock triple option offense was held in check by a stingy Bison defense that controlled the line of scrimmage.

While this year’s matchup for the Buffalo High School Bison against Glenrock didn’t have the crazy finish last season’s did, the final result was another Bison win and featured a little bit of that insanity from last year’s contest.

Anthony Graves blocked a pair of punts for the Bison, Mason Moon recovered an onside kick that caught everyone by surprise, Glenrock racked up 95 yards in penalties and Moon tied the school record for touchdown passes in a game with four for the second consecutive week as Buffalo took down its second Converse County football team of the fall.

“All week long the theme was to play selfless. Play like an offensive lineman,” coach Rob Hammond said. “You have to be willing to make a physical play and take on a block and not worry about the stats and the defense did that really well.”

If the Herders had it their way the entire contest would have mirrored the opening quarter. Glenrock ground out a time consuming drive that ate up chunks of yardage and half of the first quarter clock.

But after a questionable 4th and 8 run was stuffed by the Bison defense, the Herders were fed a dose of Rowen Ruby as Buffalo put together a time consuming drive of their own, the Bison’s resulting in the only score of the opening frame.

The offensive line cleared the way for 52 first quarter Ruby rushing yards, culminating in a 1-yard touchdown run with just over a minute remaining to put the Bison up 7-0 heading into what would turn out to be a dominant Bison second quarter.

The Herders went nowhere on their second possession and immediately punted back to the Bison. Moments later Moon found a streaking Hyrum Hatch across the middle for a 41-yard touchdown strike to put the Bison up 14-0 with 10:12 to go in the half.

“Watching the film with the varsity guys they all said that was the fastest Hyrum has ever looked,” Hammond said. “He really took off with that catch.”

After a Herders personal foul on the extra point put the ball at the Bison 45-yard line on the kickoff, Buffalo caught Glenrock completely off guard as a short kick to the sidelines was recovered by Moon just before the ball rolled out of bounds.

“It’s something coach Trevor Moon and the kids work on,” Hammond said. “We see kids trying to cheat and take away that squib kick, so coach sees that and just calls that little pooch. We’re just kind of trying to get the ball back.”

One play later a quick pitch to Ruby went 35 yards to the end zone and the Bison were on a roll.

Moments later Moon found Ruby for a 50-yard touchdown pass after Dawson Hatch picked off the Herders on a third and long pass attempt, their first of the game.

The Bison defense held again as the Herders tried to get something going on the ground, normally an issue that their triple option offense has little trouble with.

Not only did the ground game have trouble gaining any kind of momentum, the punting game for the Herders didn’t help.

After getting a hand on an earlier Glenrock punt, Graves exploded through the Herder line and rejected a second quarter attempt. A timeout taken by the Bison before the blocked kick left plenty of time for Buffalo to add to the scoreboard.

Leading 28-0, Ruby streaked around the left side of the Bison line for a score two plays after the blocked punt that put the home team up 35-0 heading into the break and little sign the Herders were capable of a comeback.

Hyrum Hatch and Ruby busted off big runs in the third before Moon found Taylor Swanston on a 31-yard touchdown toss. Moon again had plenty of time to survey the field and find the open man. Moon finished six of nine through the air for 170 yards and four touchdowns.

A Dallas Lopez sack helped lead to another punt for Glenrock in the third. A nice return by Ruby set up Moon again, this time finding Dakota Lopez for a 13-yard scoring strike on third and nine as Buffalo stretched its lead to 49-0.

The Herders managed a pair of scoring drives in the fourth quarter, but the backups for the Bison weren’t done putting up points.

“We wanted to get Ben some carries behind a varsity line,” Hammond said. “The more confidence he got the harder he ran and he did a nice job in the fourth for us.”

“We wanted to get some bigger bodies in there, so we put Jace in the middle and took our free safety out,” Hammond said. “His role was just get free and get to the ball and make tackles, and he made a ton of tackles.”

Nathan Swanston, Hyrum Hatch, Calvin Rule and Hunter Pope worked over the Glenrock triple offense seemingly at will. The Herders amassed just 151 yards on the ground, most of it in fourth with the game well in hand.

The Bison head to Moorcroft Saturday for a 6 p.m. matchup with the Wolves. Game date and time was changed from Friday due to a lack of available officials.