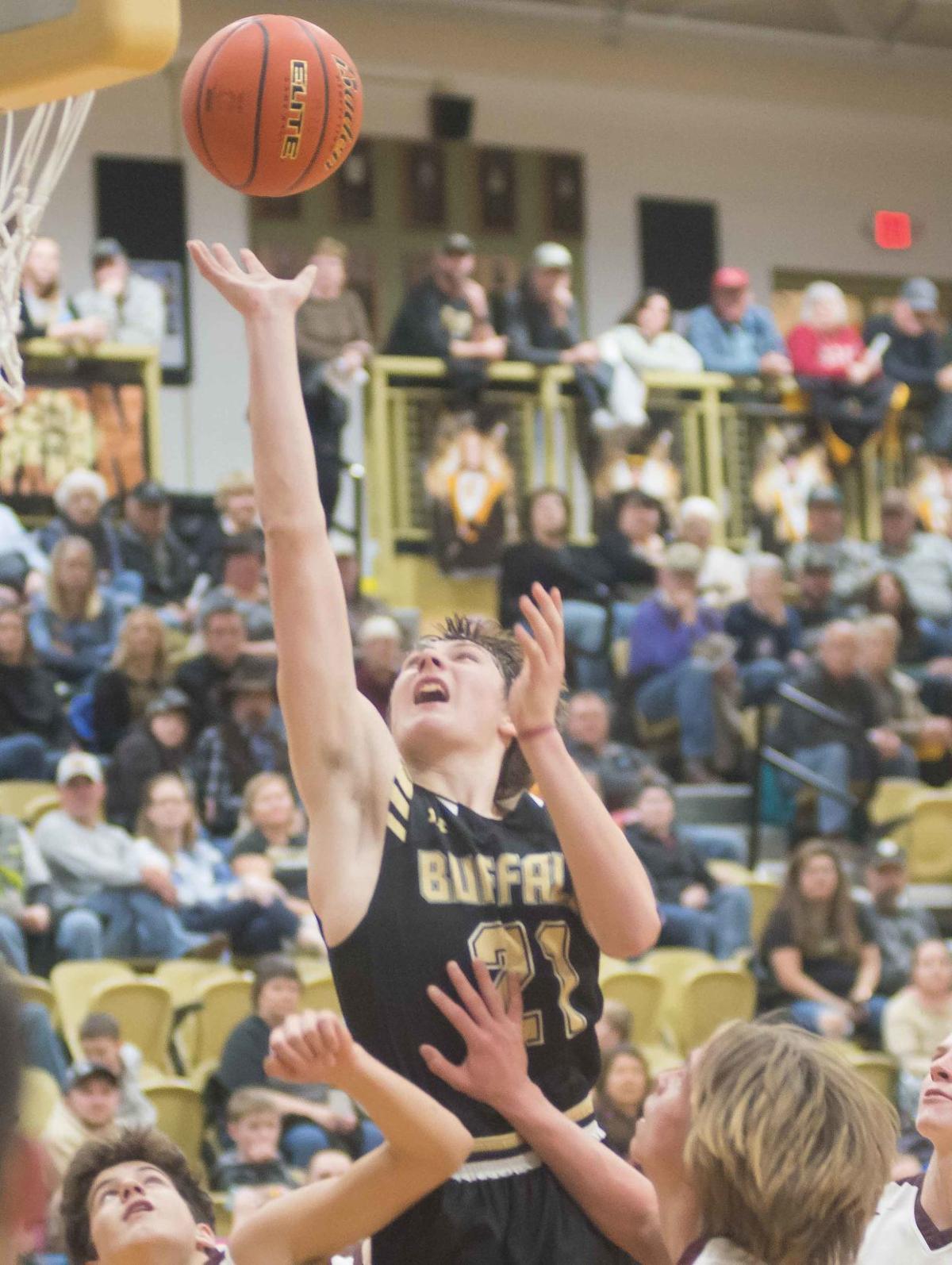 Hunter Stone rises at the rim Friday night as the Buffalo High School Bison basketball team jumped out to a big lead and held on against Big Horn for a 49-36 victory over the Rams at BHS. Buffalo followed that up with a win over Torrington Saturday night at BHS. 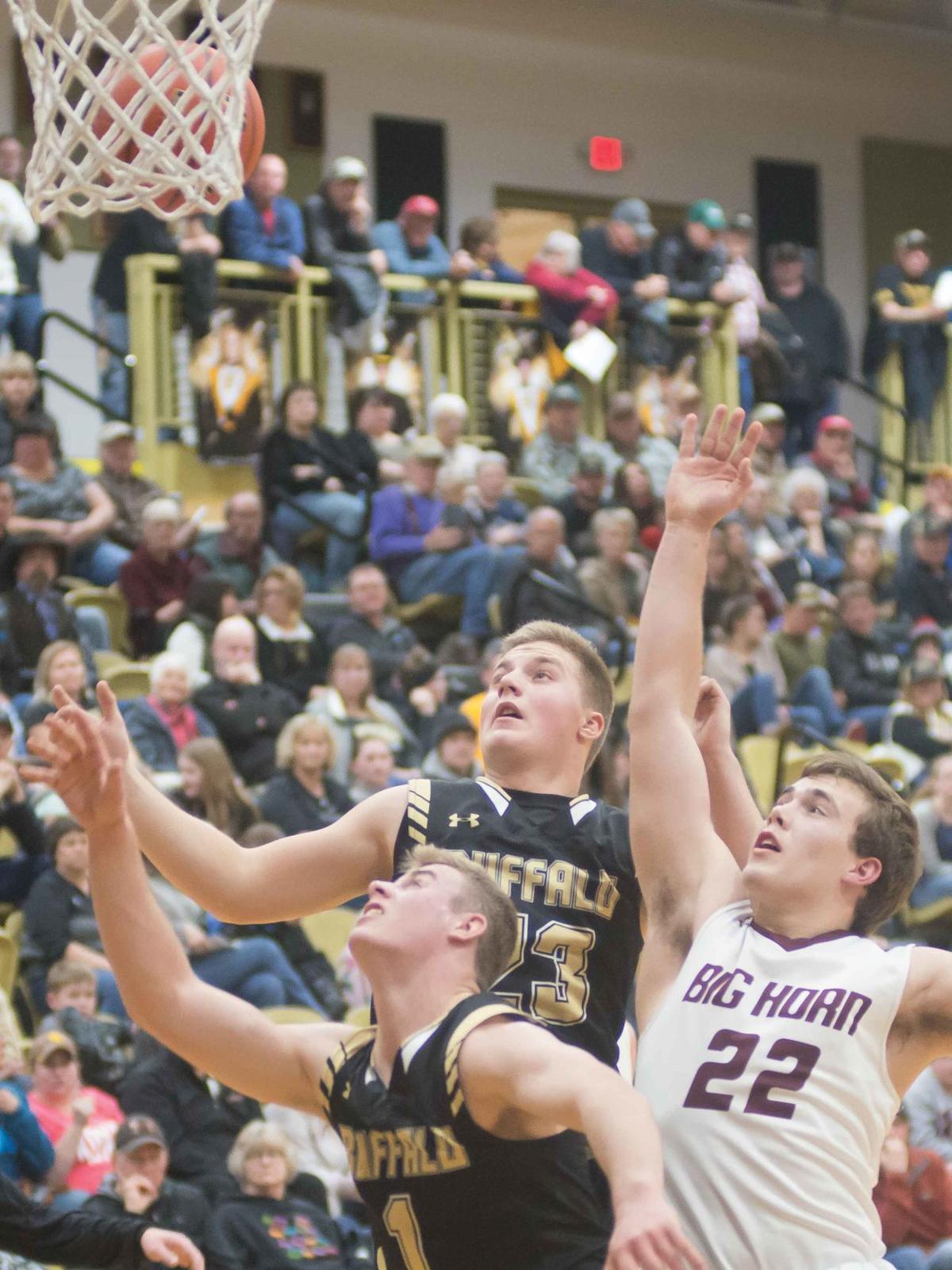 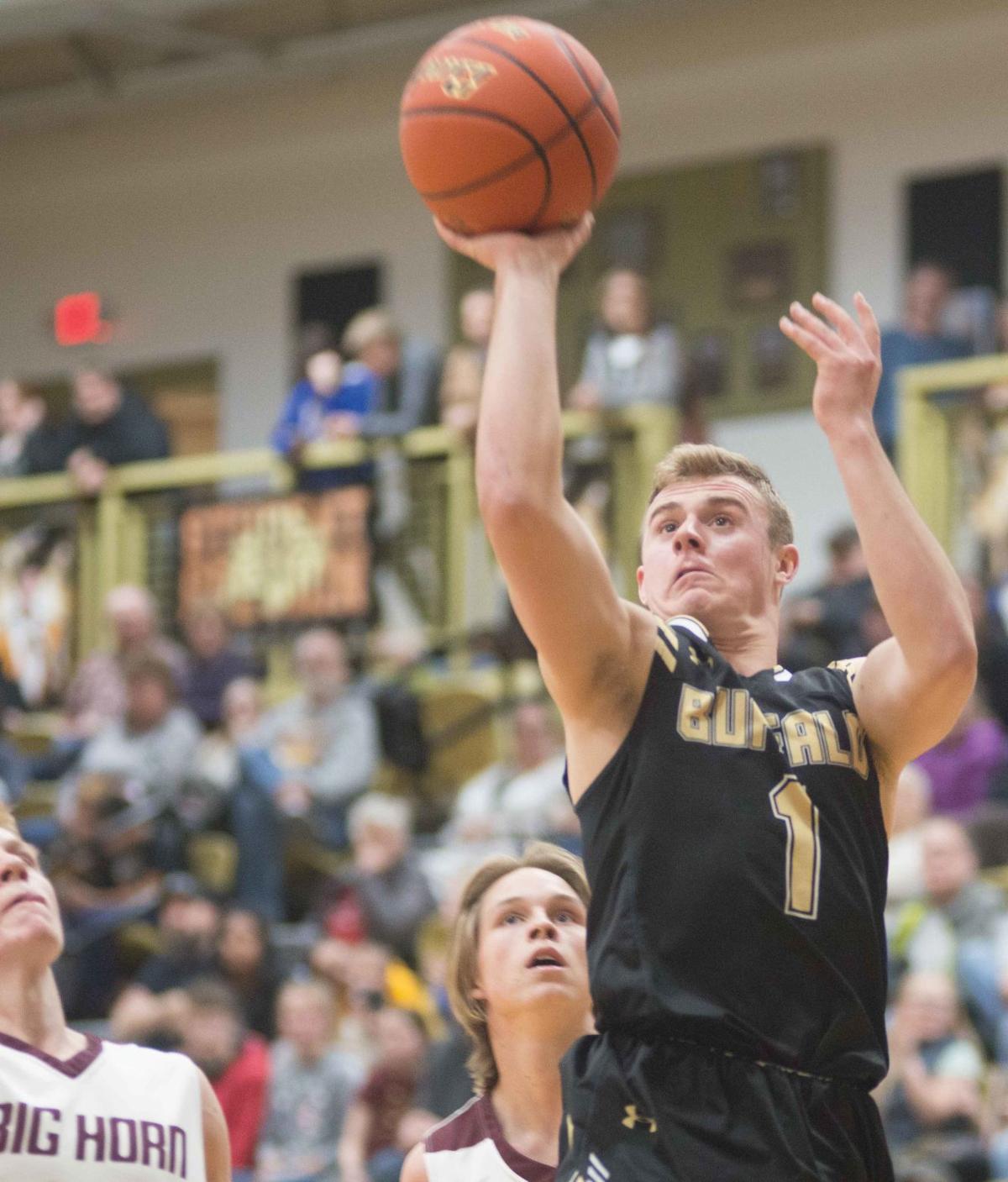 The Buffalo High School boys basketball team fended off invasions from the north and south over the weekend at BHS, as the Bison took down Big Horn 49-36 Friday night and Torrington 70-33 Saturday night to up their record to 11-6 overall and 2-1 in conference, still atop the 3A Northeast.

Senior Dawson Hatch presented a nightmare matchup on both ends of the floor against the Rams Friday night as he racked up 19 points and helped hold their top scorer to six.

Hunter Peterson finished with nine points and Hyrum Hatch eight as the visiting Rams did what they could to make it an ugly game. The Bison appeared in control for most of matchup, but the Rams clogged up the middle of the lane and took some chances on defense to keep things close.

Offensively the Rams managed a couple of nice runs the Bison were forced to answer. Big Horn nailed some shots at the end of the second quarter to quickly make it a game heading into the break.

“I was really happy with how we played except for that final two minutes before halftime,” coach Tanner Hart said. “They hit some big shots, and we didn’t take care of the ball.”

Hunter Stone presented matchup challenges of his own for the Rams. Stone hauled in 11 boards and dished out four assists in the win.

Dawson Hatch and Peterson got the transition game going early Saturday against a well-rounded Torrington team with Peterson finishing on a long pass from Hatch.

Peterson scored again in transition off a Stone steal before a Rowen Ruby shot from the arc made it 9-0 early.

A Dawson Hatch 3-pointer in the second quarter stretched the lead to 18-4 in the second as a suffocating Bison man-to-man defense kept Torrington searching for answers.

The defense held the Trailblazers to 10 points in the first half, many of those coming at the free-throw line.

“It was an awesome defensive effort,” Hart said. “We were scoring in transition, and we were patient on offense in the half court. Torrington has had a pretty good season, and to hold them to 10 points in a half with as good of players as they have is pretty good.”

A Mason Moon block on the defensive end led to a 3-pointer on the other end for the Bison sharp shooter as the Bison stretched the lead to 23-4 with four minutes to go in the first half. Moon finished with 11 points on the night.

A Nate Swanston drive and finish put the total at 33 for the Bison at the half to Torrington’s 10. The Bison continued the trend in the second half to shut the door on the Trailblazers in convincing fashion.

A matchup with Rawlins Saturday at BHS may be one of the best games in 3A this weekend. The Outlaws will look to push the tempo and cause as much trouble with the press as possible. Both teams have strikingly similar records on the season.

“We need to take care of the ball against Rawlins,” Hart said. “They like to drive and create on offense. We may have to mix things up defensively. It is going to be an exciting game.”