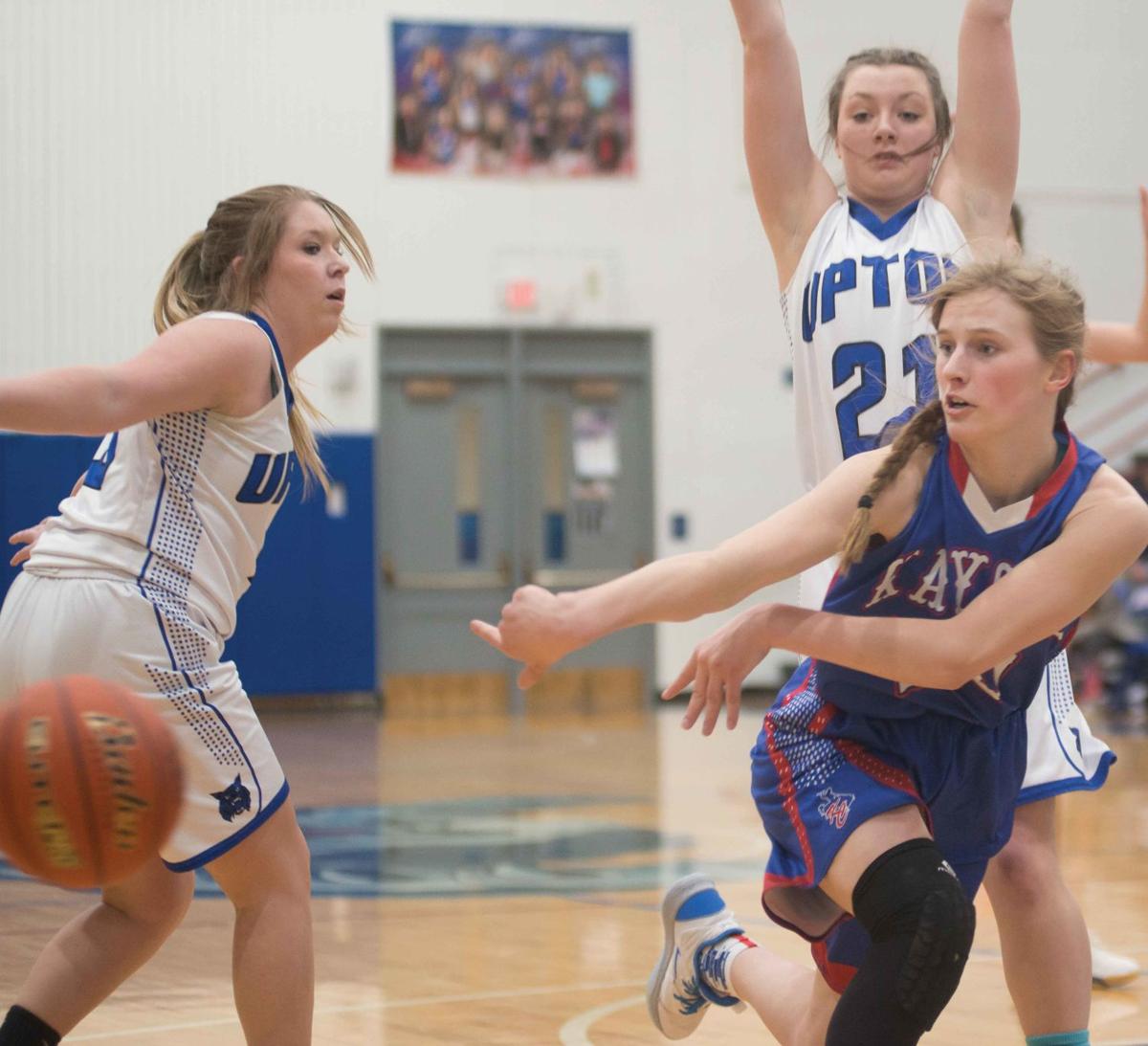 Tinley Pierson drives by a pair of Upton defenders and passes to a teammate Saturday at Douglas High School during the 1A East regional championship game. 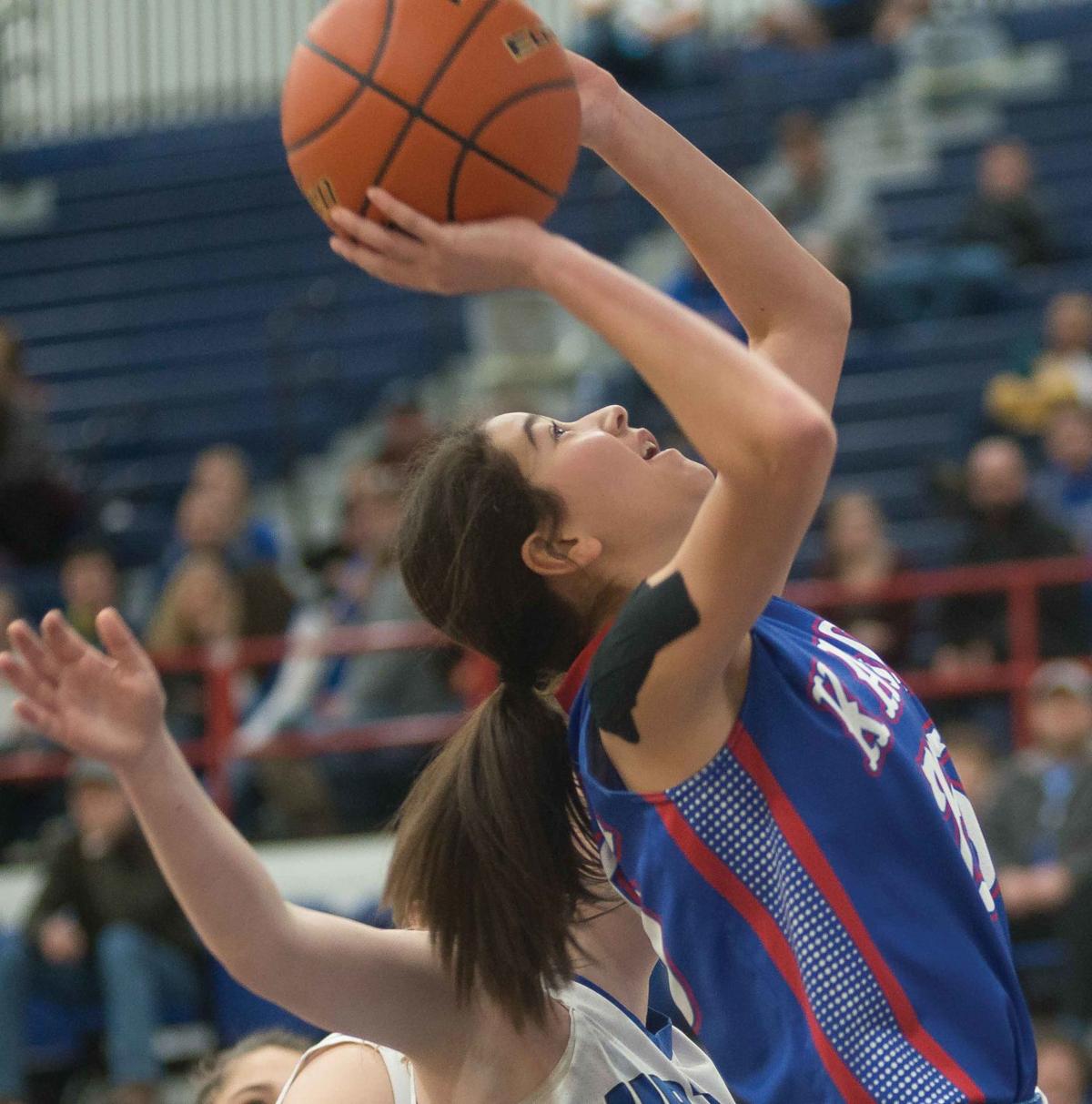 Free throw shooting turned out to be the Achilles heel for the Kaycee High School Lady Bucs basketball team in a pair of losses to Upton this season.

The Lady Bucs couldn’t have found a better time to turn the tables as they put on a clinic at the free-throw line Saturday against Upton to leave Douglas the 2020 1A East regional champions with a 53-47 win over the Lady Bobcats.

The Lady Bucs connected on 23 of 38 free throws while the Lady Bobcats finished just 11 of 29 as Kaycee knocked off the No. 1 ranked 1A team in the state.

“I thought our girls showed up and played hard and really attacked in all three games,” coach Luke Danforth said. “It shows they did a really good job attacking the basket. We would have liked to have seen a little higher percentage, but it came together in the finals.”

Junior 1A standout Tinley Pierson made a living at the line against Upton. She finished 15 of 19 from the stripe and 28 points in the game. Braelyn Kozisek helped finish off Upton with a 5 of 6 performance in clutch time.

It hasn’t always been easy at the line this season for the Lady Bucs, especially going against Upton. The Lady Bobcats seeed to save some of their best free throw shooting of the season specifically for the Lady Bucs.

Saturday’s championship game however, whether it was strategy to fould the Lady Bucs 30 times, they simpley struggled to contain the Kaycee offense or a combination of both, they most likely will come up with a new plan if they meet again.

The Lady Bucs defense starred in the opening two rounds. Kaycee held Hannah-Elk Mountain to two quarters with just two points in each for a 33-25 win to start regionals on Thursday. Friday the Lady Bucs held a talented Rock River squad to single digits in every frame for a 29-26 win to advance to the title game.

“All of the girls played well all weekend,” Danforth said. “Our depth really paid off for us. We had 12 girls get in this weekend, and they really stepped up.”

Jackie Ramirez started out with a double-double against H-E-M with 11 points and 11 boards. Bindi Hill added seven points and six rebounds in the win.

Friday Rock River had a difficult time stopping Sierra Kilts as she dropped in eight points and grabbed three rebounds. Arlette Ortega drew maybe the toughest assignment of the tournament in stopping the Rock River posts. She and Kaitlin Chapman combined to frustrate the Rock River bigs all game long.

Despite the 28 from Pierson, it was Ramirez again in the championship game starting off hot. She hit a 3-pointer to get the Lady Bucs on the board early. After a Kilts steal and deep shot with a fraction of a second on the clock, it was Hill up high for a put back at the buzzer to keep things close. Ramirez finished off the first half with a late turnaround to put the Lady Bucs up 20-15 at the break.

Both teams were in the bonus early in the second half with Pierson attacking the basket and taking advantage of the Upton foul trouble. Kozisek added a late block to go along with her performance at the line. Mary Cleveland and Jade Maya worked around some tight calls from the referees to help lead a solid second half effort. The teams were called for a combined 50 fouls.

“It was good to get Mary back in the mix, and Jade just had a great defensive weekend,” Danforth said. “She drew the top scorers on each team and did a lot of the other jobs in the wins. She shut people down all weekend.”

The Lady Bucs don’t have long to celebrate, however. They face a tough test against No. 4 SW Farson to start out the state tournament Thursday in Casper. They started out a brutal schedule with some tough losses, but rebounded nicely for some impressive wins, including one against Upton.

“Hopefully we have three good games ahead us this week,” Danforth said. “We’ll go down and play hard and see if we can’t make something happen."