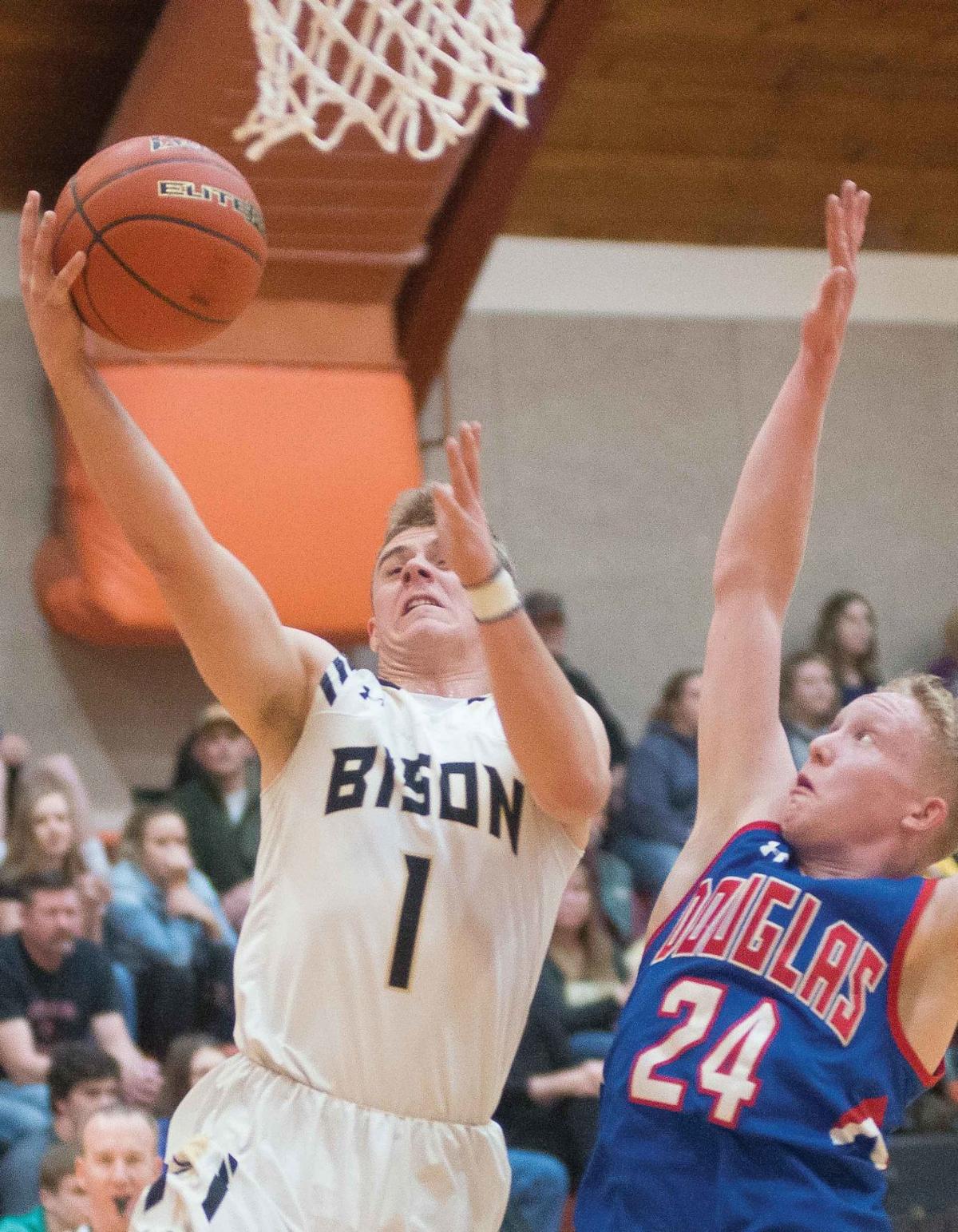 Dawson Hatch goes to the rim against a Douglas opponent during the Buffalo High School Bison’s 3A East regional tournament win over the Bearcats. Hatch was one of three Buffalo players to earn all-conference recognition this week. 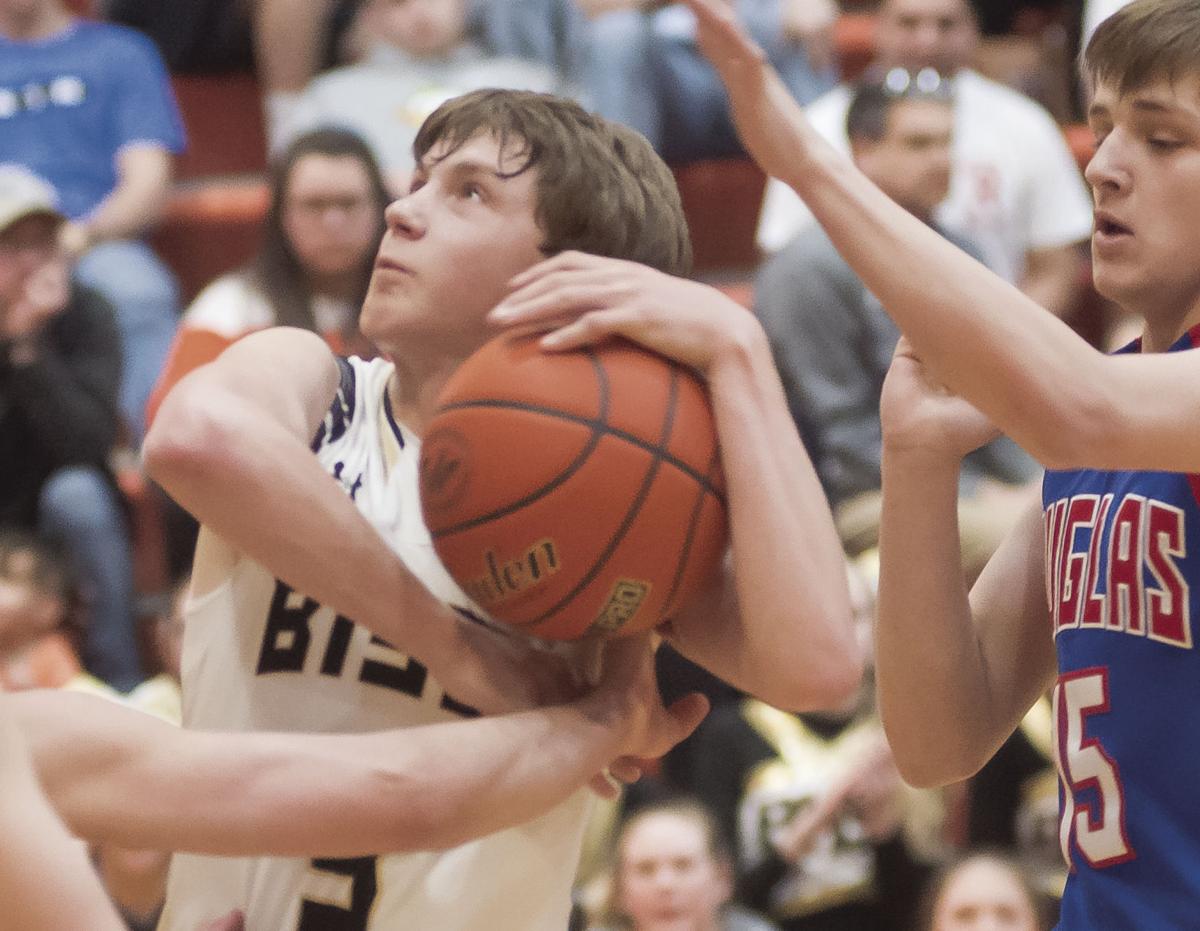 Hunter Peterson eyes a basket during this year’s regional tournament in Newcastle. Peterson was named all-conference, all-state and invited to play in the North/South all-star game.

Everything escalated quickly last week in the moments that were to lead up to the tipoff of the 2020 3A/4A state basketball tournament in Casper.

Within the span of a couple of hours, the tournament went from proceeding as usual to players competing in empty arenas to the cancellation of all games.

Since then, not only has the state basketball tournament been cancelled, but on Monday the Wyoming High School Activities Association suspended all activities until Monday, April 6 in light of the looming presence of the coronavirus.

For the Buffalo High School Bison boys basketball team and its fans it’s a season that ended with a lot of “what ifs?” like so many other teams in the conference.

The Bison bus didn’t make it halfway to Casper before turning around and leaving everyone with a lot of questions and few answers.

“The bus ride back home was quiet,” coach Tanner Hart said. “I would describe the attitude as deflated. There was some frustration and a lot of questions about rescheduling and we didn’t have any answers.”

Just before leaving for Casper, word came from the WHSAA came that fans, the bands and cheerleaders, the media and even parents would not be allowed into either Casper location hosting the games.

“There were some frustrated parents I think,” Hart said. “But the players seemed to accept the fact they would have to play in an empty stadium. We had a good week of practice and a good game plan against Worland, and that’s what we were focused on.”

About 10 miles north of Kaycee the tweets starting coming in, alerting the public of the tournament cancellation. Official word came a little past Kaycee and the quiet trip back to Buffalo ensued.

“It would have been more frustrating to get all the way down there and have to turn around and come back,” Hart said. “The Torrington kids had a game just before ours. I think they were told to leave just as they walked into the gym.”

The WHSAA issued a release Monday stating during the activities suspension, no practices will be allowed for spring sports. If and when high schools do resume those sports, the WHSAA will maintain the nine-day practice rule, but count any practices from previous weeks toward those days. Athletes are required to participate in nine practices before competing in a regular season or post-season sporting event.

Until Monday, WHSAA had left it up to the school districts around the state to decide when to begin practices after the earlier temporary suspension of activities that would have ended March 28.

This new decision is intended to level playing field across the state when spring sports seasons resume.

The state basketball tournament cancellation comes after a season when there didn’t appear to be a clear favorite heading into the weekend for either the 3A nor 4A conferences and a after weekend of thrilling upsets and multiple overtime games the previous week during the state 1A/2A tournament.

It appeared it was a season where any team could beat another on any given night.

The WHSAA announced the state tournament will not be rescheduled.

It marks the end of a solid season for a Bison team with a new look and new coach, a team that ended the season with at least one win over every team from the 3A East.

The Wyoming Coaches Association named three Bison to the 3A East all-conference team, tied with Wheatland and Rawlins for the most players. Seniors Hunter Peterson and Dawson Hatch and junior Hunter Stone earned all-conference honors.

Peterson was also named to the 3A all-state team, and will represent the North in this summer’s annual North/South all-star game in Casper.