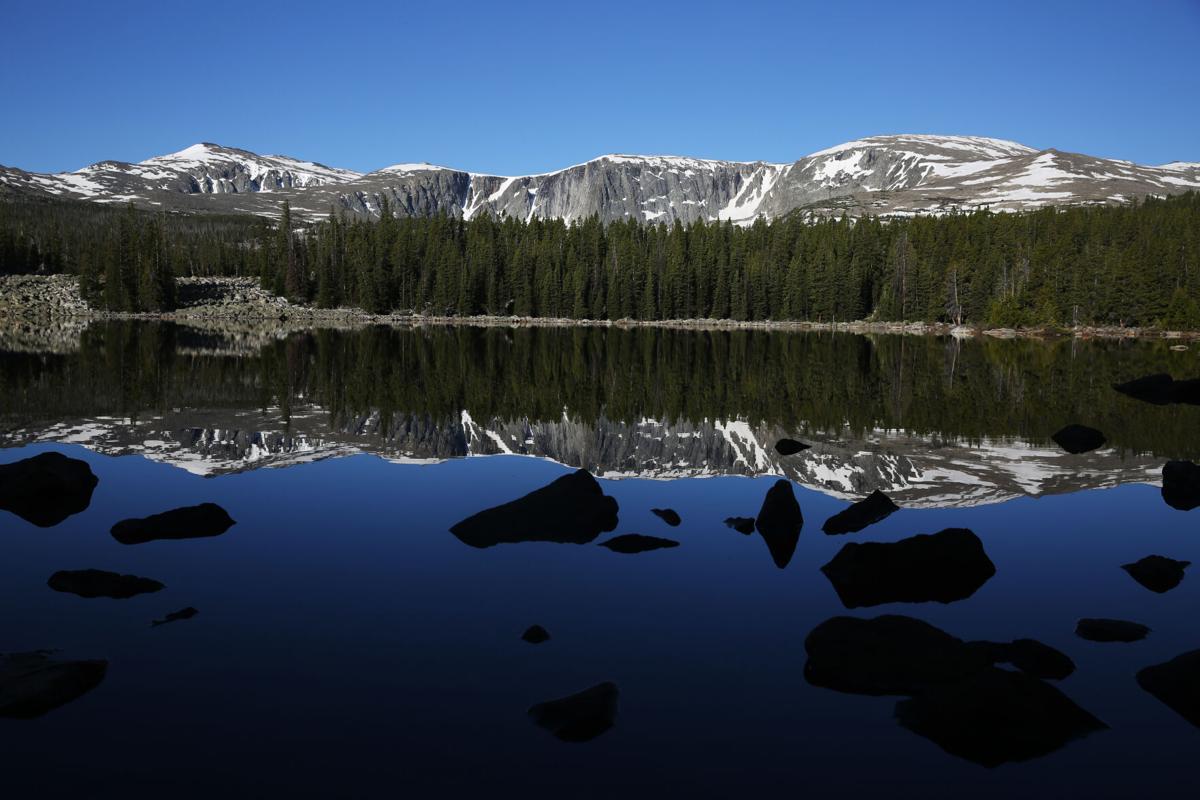 Bulletin photo by Jessi Dodge Tucked against the base of the peaks, Seven Brothers Lakes sit surrounded by pine trees and rock fields making for still water and smooth reflections. This, the first of the lakes reached by trail, doesn’t have large camping sites on its banks but has spots flat enough to camp. 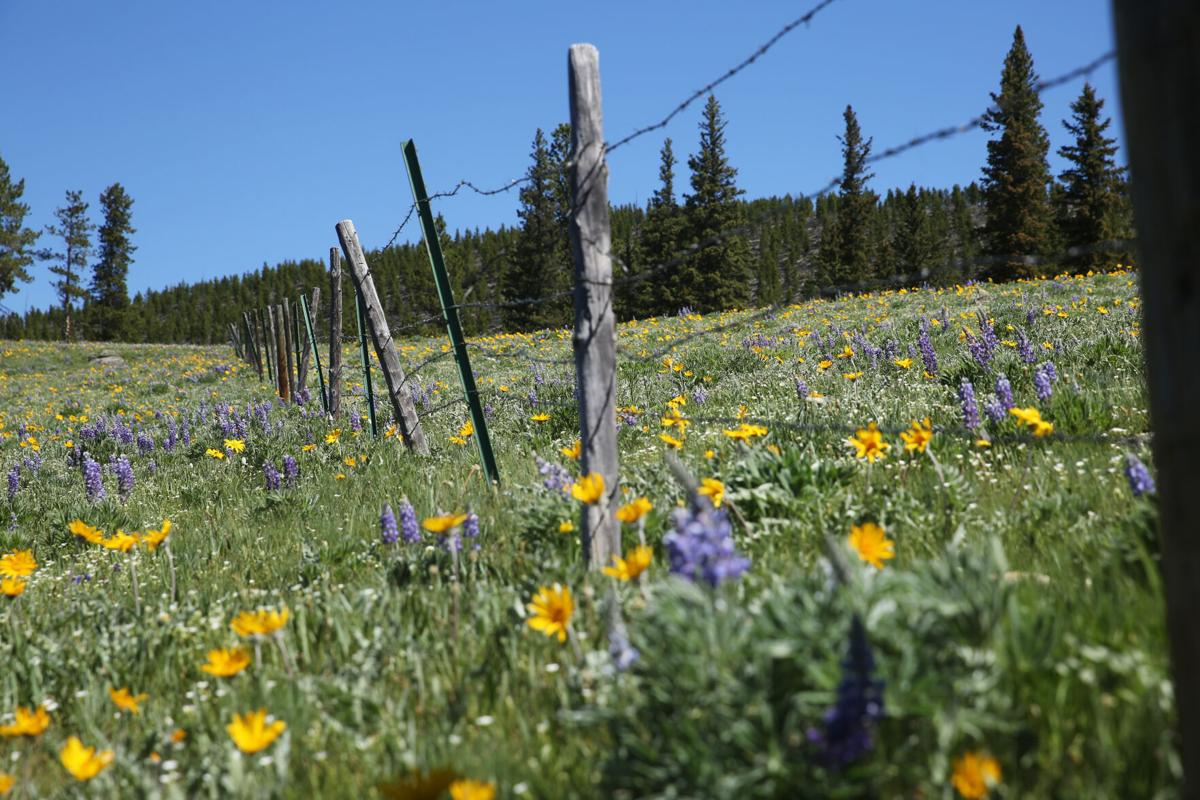 Bulletin photo by Jessi Dodge The wildflowers are in full bloom in the national forest as high temperatures bring out the color and the blooms. The yellow and purple flowers were scattered all over the lower-elevation fields.

Last week, my newspaper companions started off the hiking season with beautiful views on the Grouse Mountain Trail. Unfortunately, I was nursing the tail end of a cold and, in the best interest of my recovery, decided that I should sit that one out.

But with my cold now behind me, and with 100-degree temperatures on the horizon, we decided to hit the trail from Hunter Campground to Seven Brothers Lakes via Soldier Park — though we may have bit off a little more than we could chew.

The trail to Seven Brothers Lakes (Forest Service Road 394) starts at the cattle guard at the west end of Hunter Campground, which is a well-kept area with bathrooms that caters specifically to people riding horses or mules.

The trail begins with a rather moderate grade and weaves you in and out of tree cover, for the most part following the path of North Clear Creek. Along the first 5 miles or so, there are several portions where the trail gets steep and rocky, though it is extremely wide because those first 5 miles are open to motor vehicles.

The motor vehicle accessibility ends at the west end of the expansive meadows of Soldier Park, where the Cloud Peak Wilderness begins. Here, views of the mountain peaks are impressive, and you’ll likely run into an ATV or two zooming around the dirt roads.

At the far west side of the park, the trail narrows and re-enters the trees into the Cloud Peak Wilderness, where it is now called wilderness trail 024. Follow the notched trees for about a mile and you will find yourself at the banks of North Clear Creek — which is where things got interesting for our group of hikers.

Upon arriving at the creek, we noticed the area that our map had us crossing was too deep and moving too fast, so we spent nearly 20 minutes, with waning sunlight, searching for a more suitable crossing area.

When we found what appeared to be a shallower and slower-moving portion of the creek, I entered first. The water, while frigid, was just shin deep (I am 5 feet, 11 inches tall) and moving slowly enough that I could precariously tiptoe around the rocks at the bottom without falling.

About halfway through my crossing, however, the water rose to the middle of my thighs and the current picked up. I was able to make it safely across, but my slightly shorter hiking companions got a little wetter and a camera (and a person) was nearly dunked into the water.

After drying off from our crossing, the last half mile was extremely grueling and almost completely uphill to the banks of the first of the Seven Brothers Lakes. Though it took us nearly 45 minutes to finish the last half mile of the hike, we were met with spectacular views of the lake and peaks in the background painted with the final moments of sunset. With nightfall imminent, we set up camp at the base of the first lake and called it a night.

The next morning, we awoke early and, after eating breakfast, hiked west on wilderness trail 045 to see more of the lakes. While the whole area is spectacular, if you are coming for camping, there is a particularly beautiful spot at the banks of the second lake, where you should set up your tent.

Not wanting to get back too late, we set off to return to the Hunter Campground, but this time decided to take trail 045 east through Webber Park to avoid again crossing North Clear Creek.

For the first 5 miles of trail 045, you descend gradually among the trees, getting the occasional view of the peaks behind you and meadows in front of you. After the 7-mile hike the day before, descending for nearly two hours can take an unpleasant toll on your knees, so our descent featured frequent water stops and stretching.

In addition, portions of this trail through the meadows are hard to follow, so look for the horse tracks and areas where grass is matted down to keep you on the right path.

After about 4 miles of descending, you push through the trees and into the wildflower-covered meadows of Webber Park. Here, the grass is dotted purple and yellow as far as the eye can see and the terrain flattens to give your knees a much-needed reprieve.

At the end of Webber Park, a much easier creek crossing (you can walk on the rocks) awaits you before the trail once again turns uphill. This uphill section was easily the most grueling half mile of the hike, and our group stopped at least three times on the way up the hill that seemed like it would never end. At the top of the hill, you can see the Hunter Campground — and think you are nearly there — though one more unpleasant uphill awaits. By the end of the final uphill portion, all three of us were nearly crawling.

While this hike was grueling at times, both trails provide a plethora of different views that make the Bighorns spectacular — from mountains to meadows to creeks to wildflowers — and bring you to what I think is one of the best areas in the Cloud Peak Wilderness: the Seven Brothers Lakes.

Directions from Buffalo: Take U.S. Highway 16 West out of Buffalo for about 13 miles. Turn right at Hunter Creek Road/Schoolhouse Park Road. Follow Hunter Creek Road until it reaches the Hunter Campground. The trail is clearly marked at the west edge of the campground.