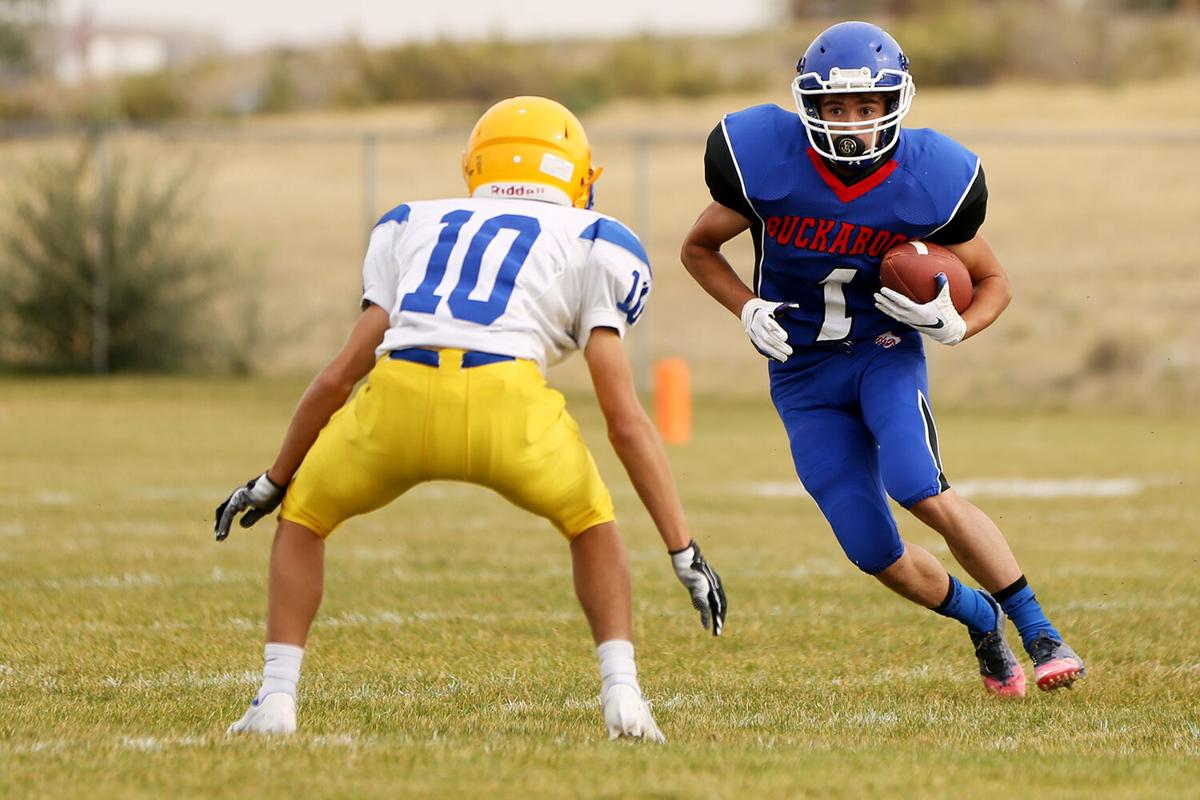 Kaycee High School senior Dylan Fauber searches for a path around the facing defender on Saturday morning. Fauber spun around the defender to break away from the original tackle. 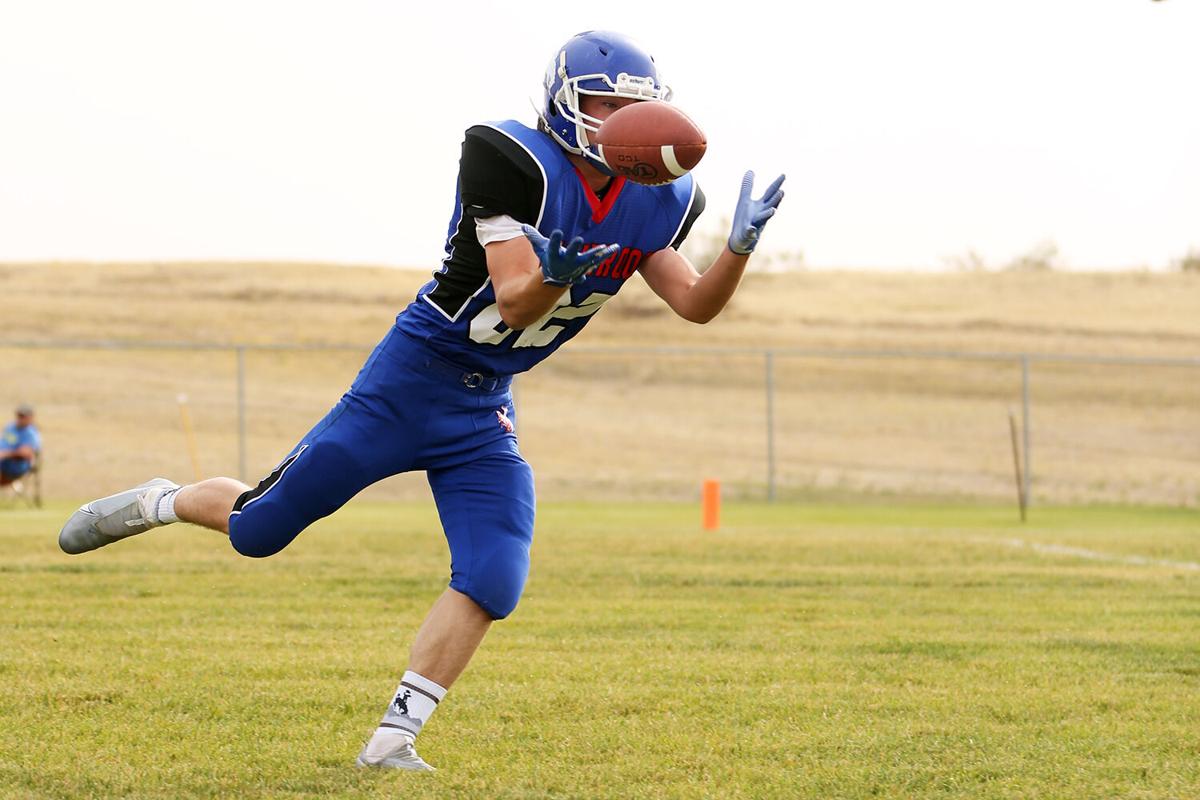 Kaycee High School senior Rhys Stafford dives to catch the first touchdown pass for the Buckaroos on Saturday morning. This was the first of multiple touchdowns by Stafford. 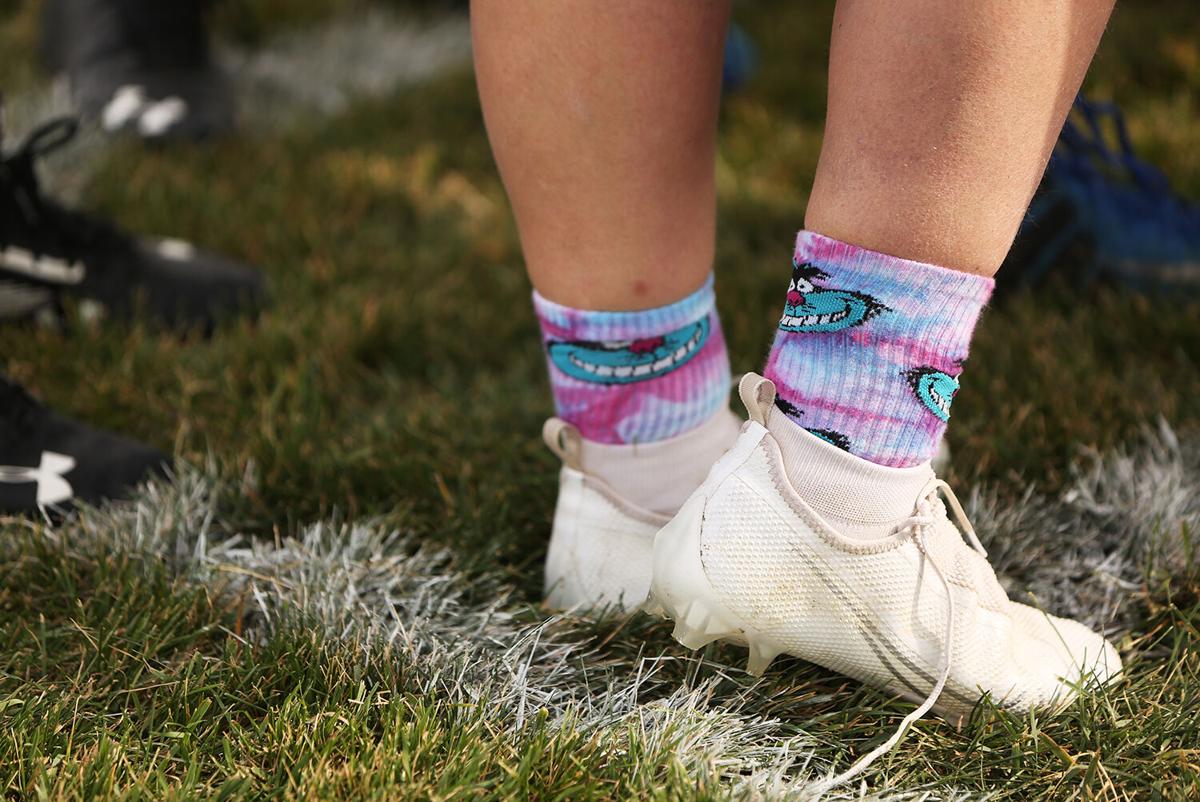 Kaycee High School freshman Nickolas Devin boasted tied socks with pictures of the Cheshire Cat on them. Everyone wore different socks on the Kaycee side, a handful with a splash of color. 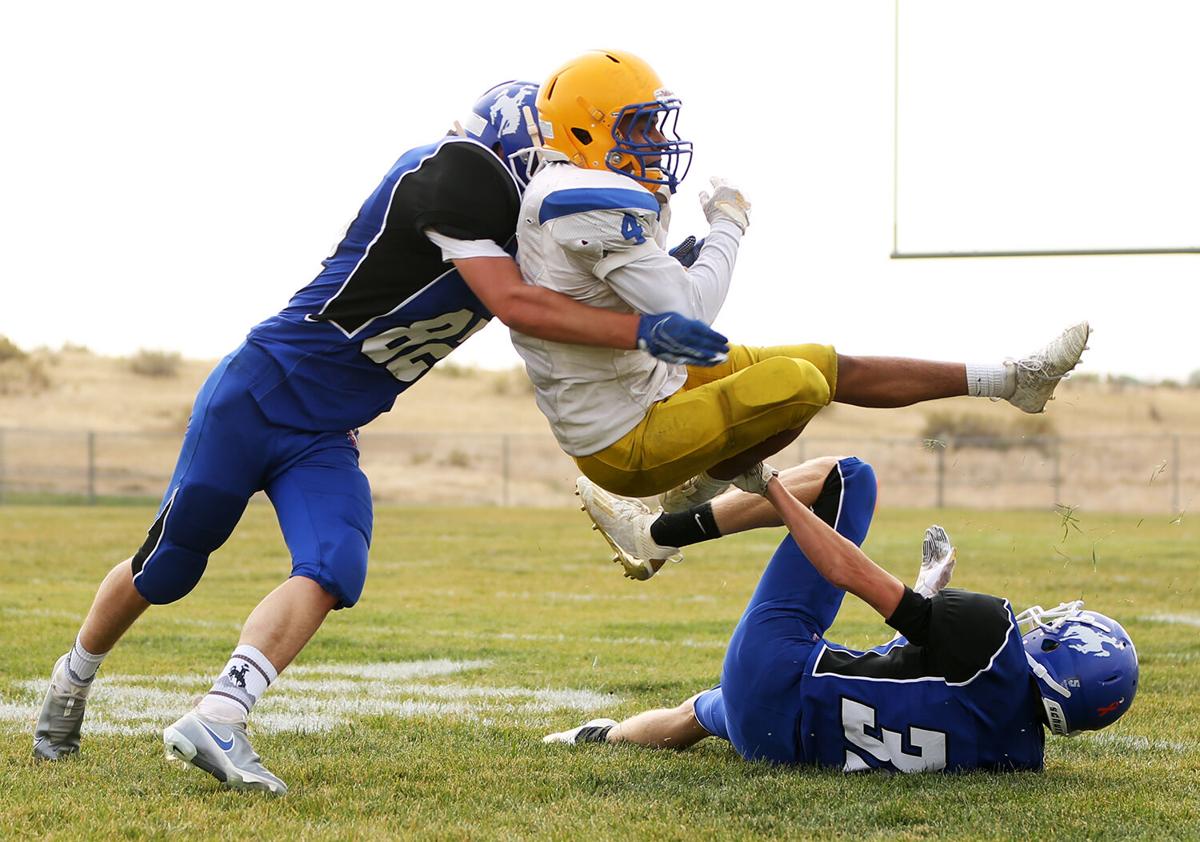 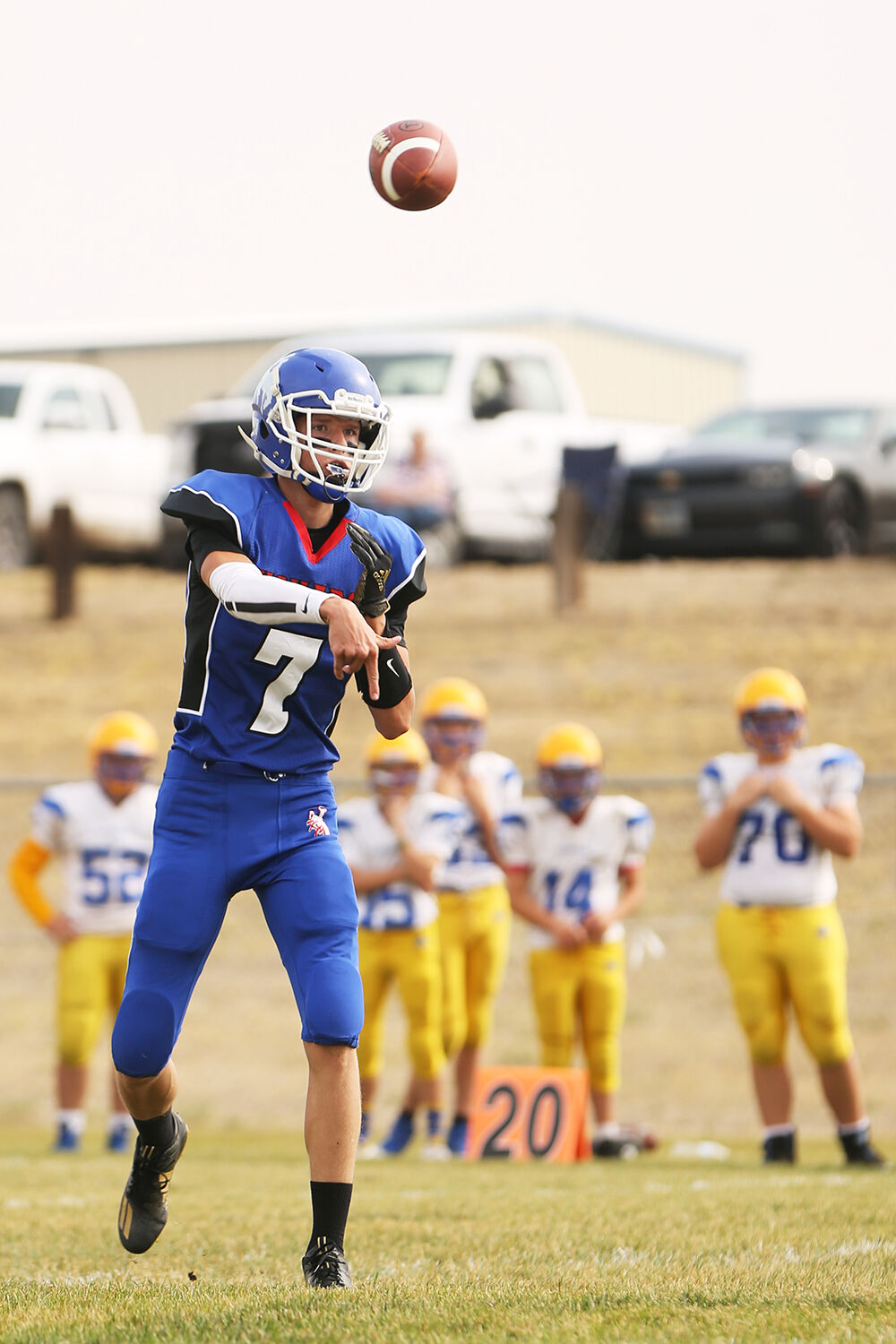 Kaycee High School starting quarterback Harley Davis throws a ball to a receiver during the first half of the game against Sheridan on Saturday morning. Davis played for the first half but sat out for most of the second, holding a bag of ice on his wrist. 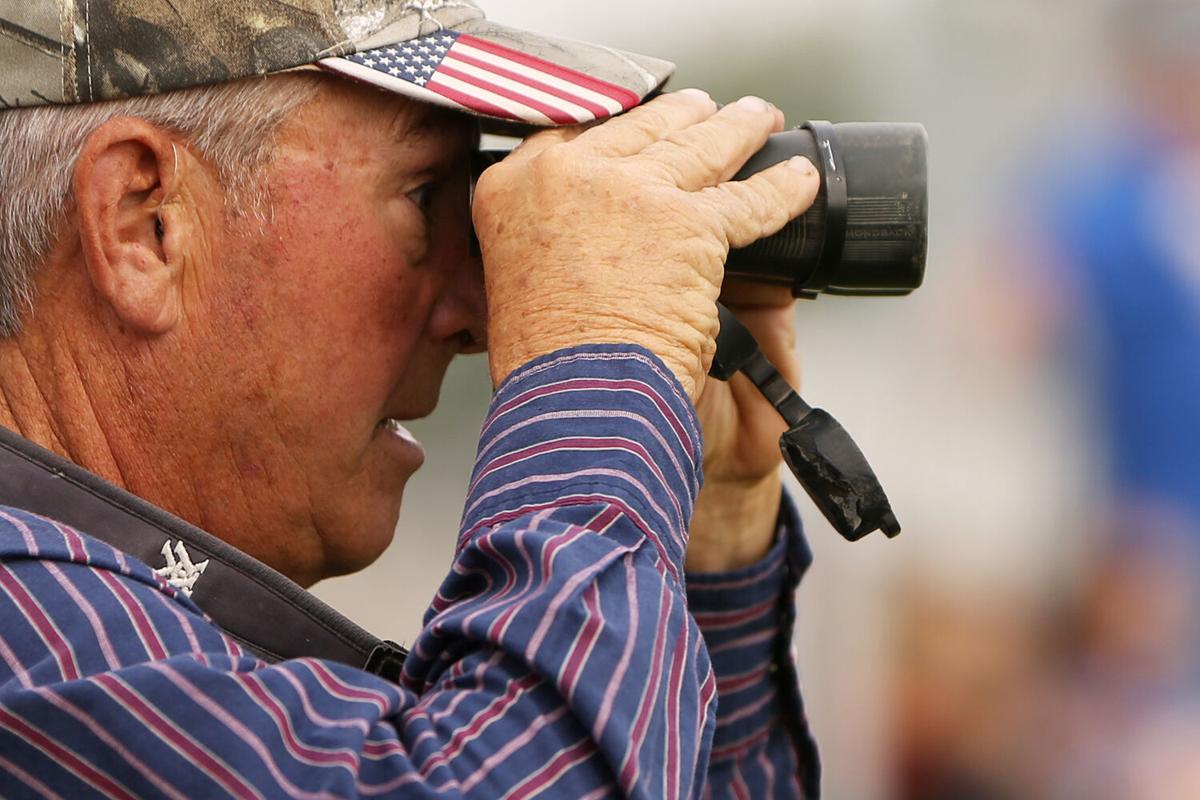 Mark Largent follows the ball with his binoculars during the first half of the home game on Saturday morning. Largent’s son is the head coach for Kaycee and the binoculars make it so Largent can see not only the whole field but he individual players throughout the play. 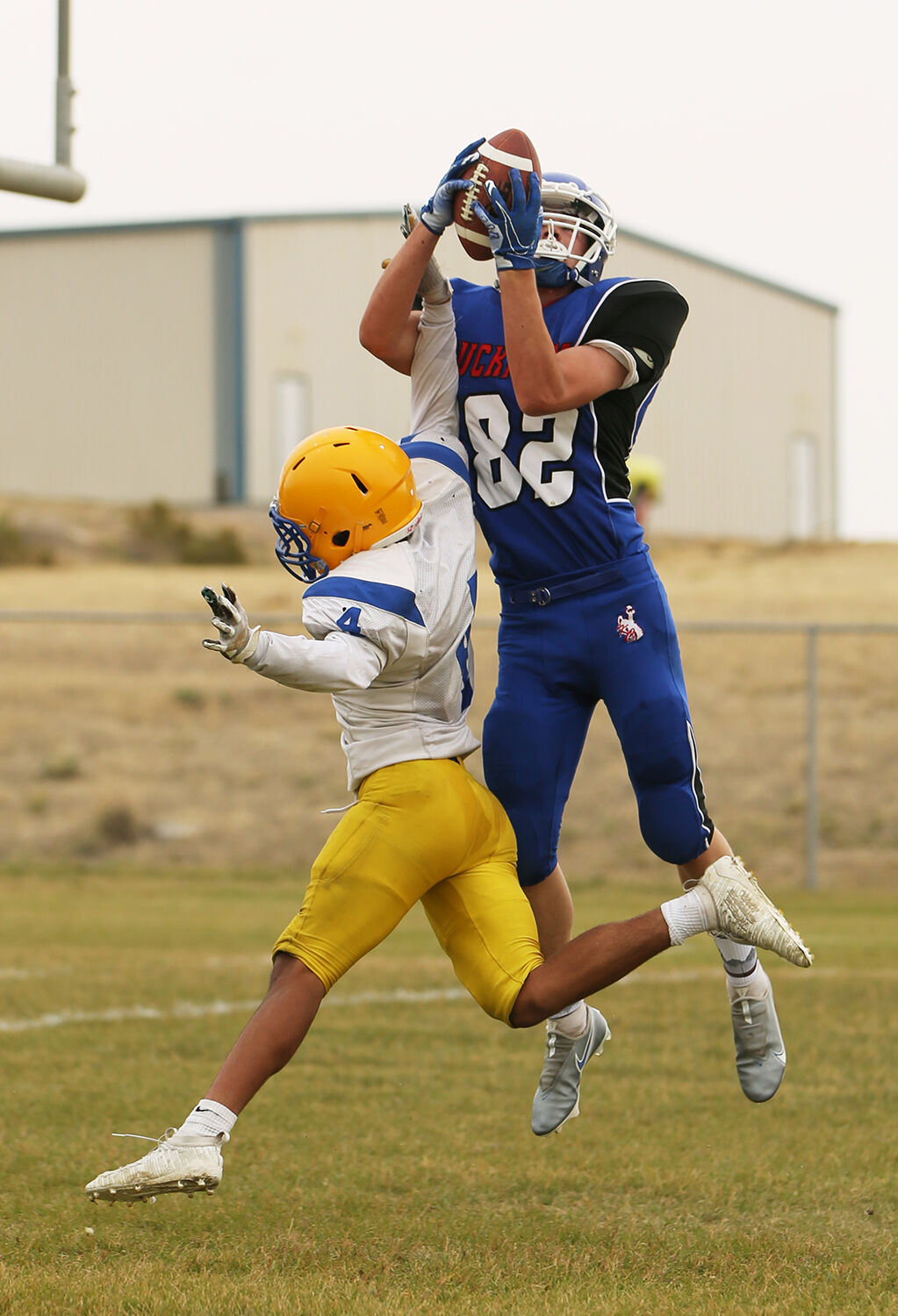 Kaycee High School senior Rhys Stafford stretches over Sheridan defender Nahir Aguirre to complete a catch on Saturday morning. Stafford ran the ball into the income to score another touchdown for Kaycee. This touchdown increased Kaycee’s lead, raising the score to 32-14. 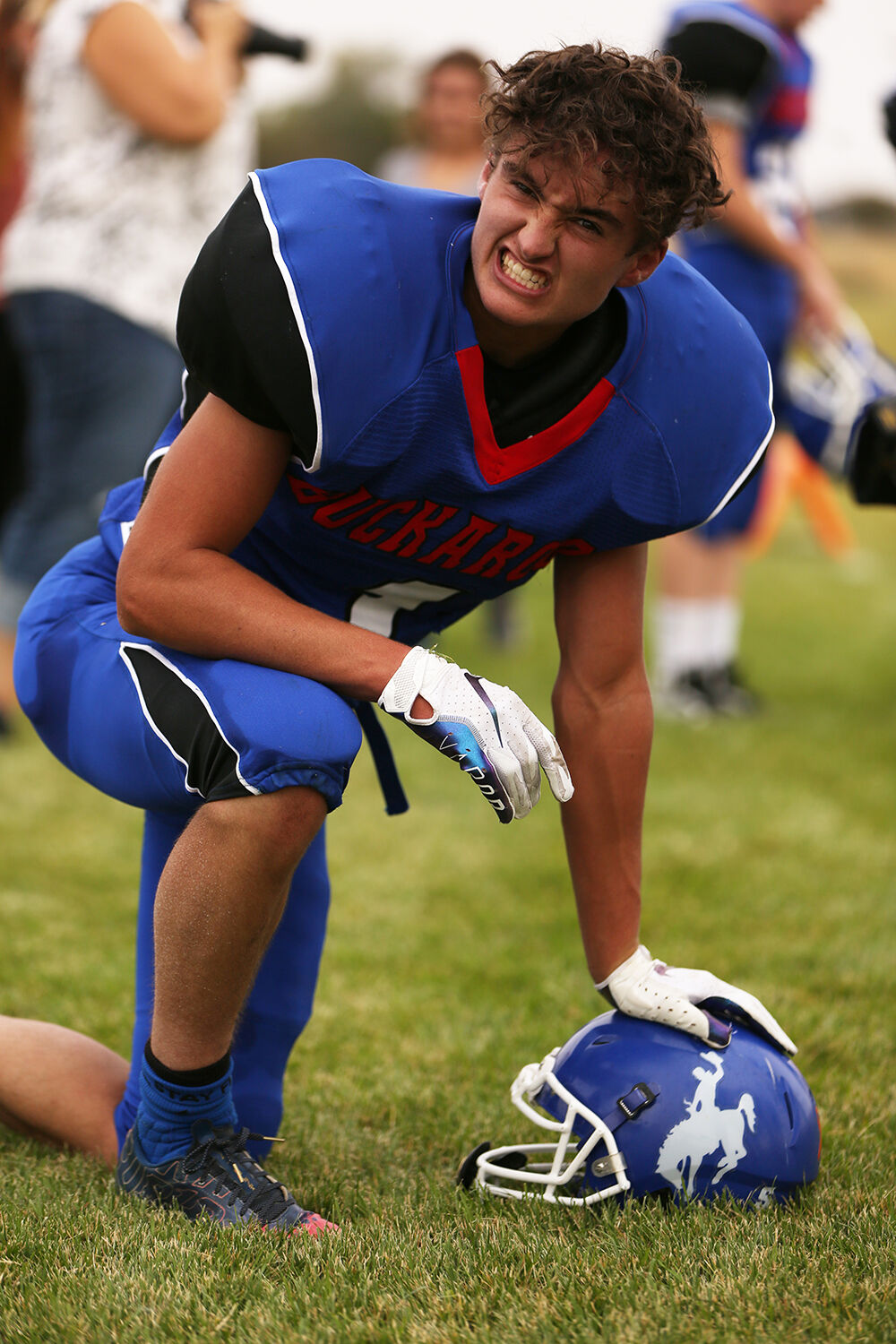 Kaycee High School senior Dylan Fauber kneels after coming off the field after a play on Saturday morning. The officials threw a flag but had taken it back, which Dylan was being told from a parent on the sideline. 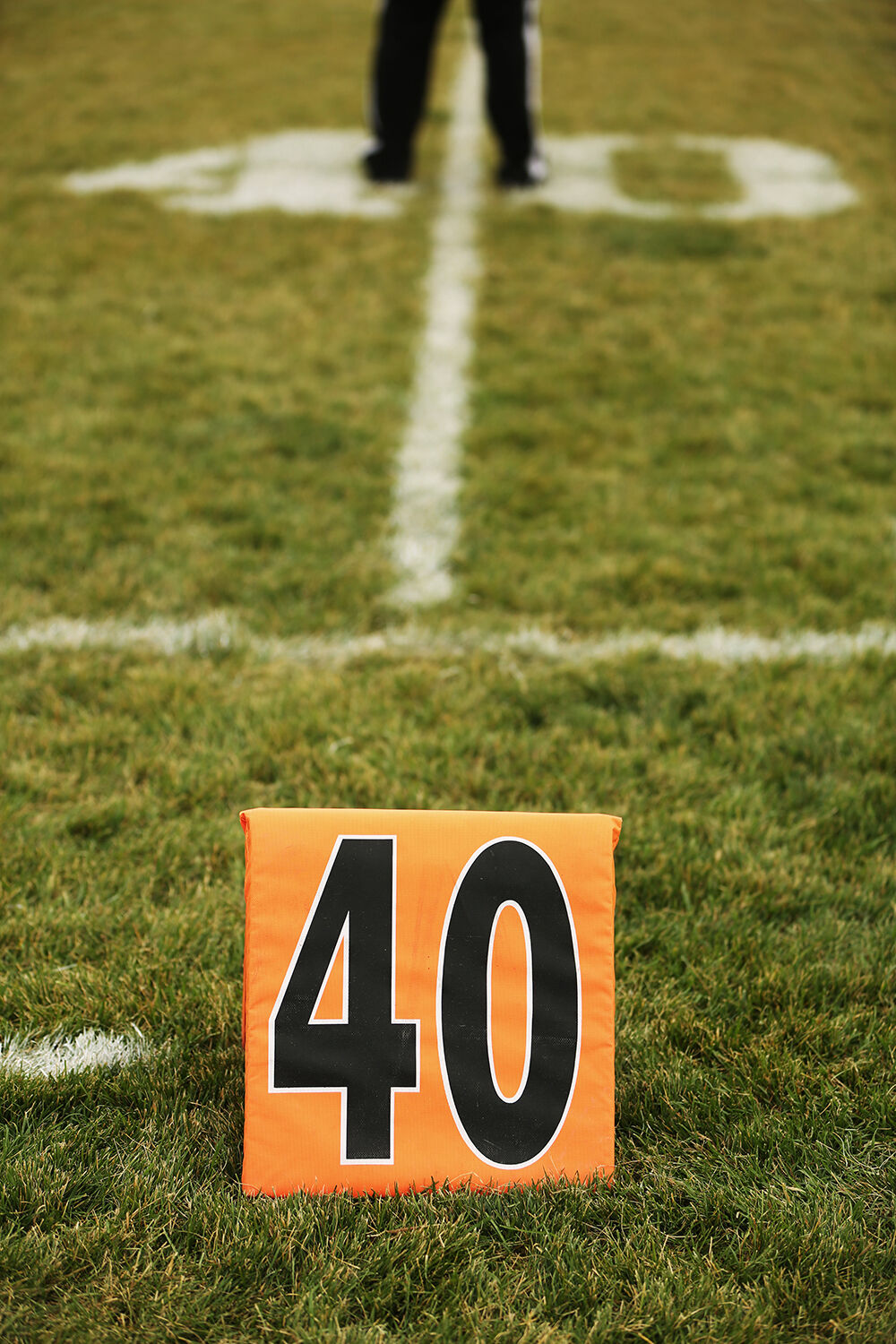 Kaycee High School football hosted a freshman team from Sheridan on Saturday morning. The football game was moved up so that it didn’t overlap with the volleyball matches being held starting at 12 p.m. 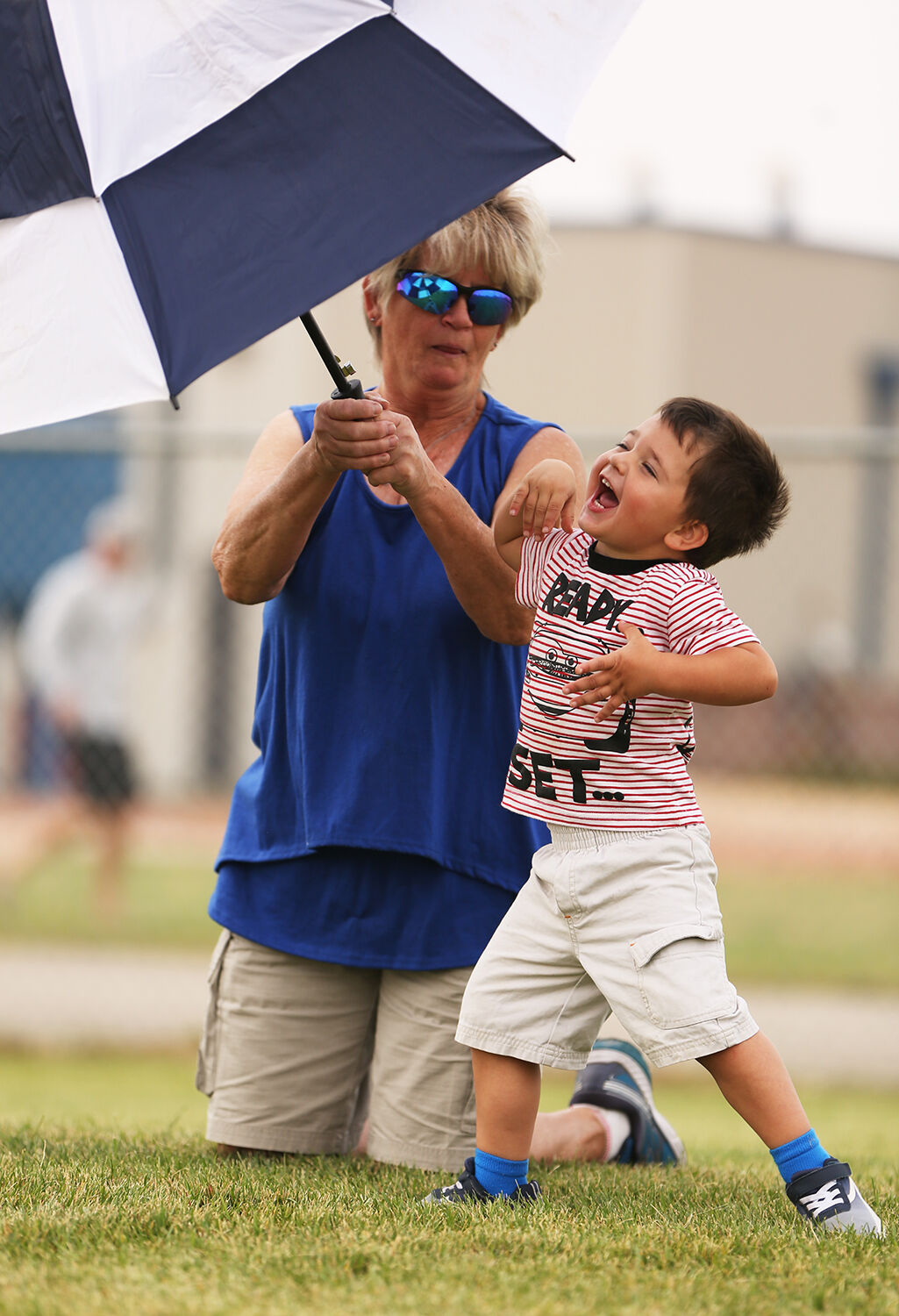 Evander Largent bursts out in laughter as his great grandmother Jan Gray opens the umbrella on Saturday morning. The two played a game where Gray would open and close the umbrella and Evander would jump away and laugh when it opened. 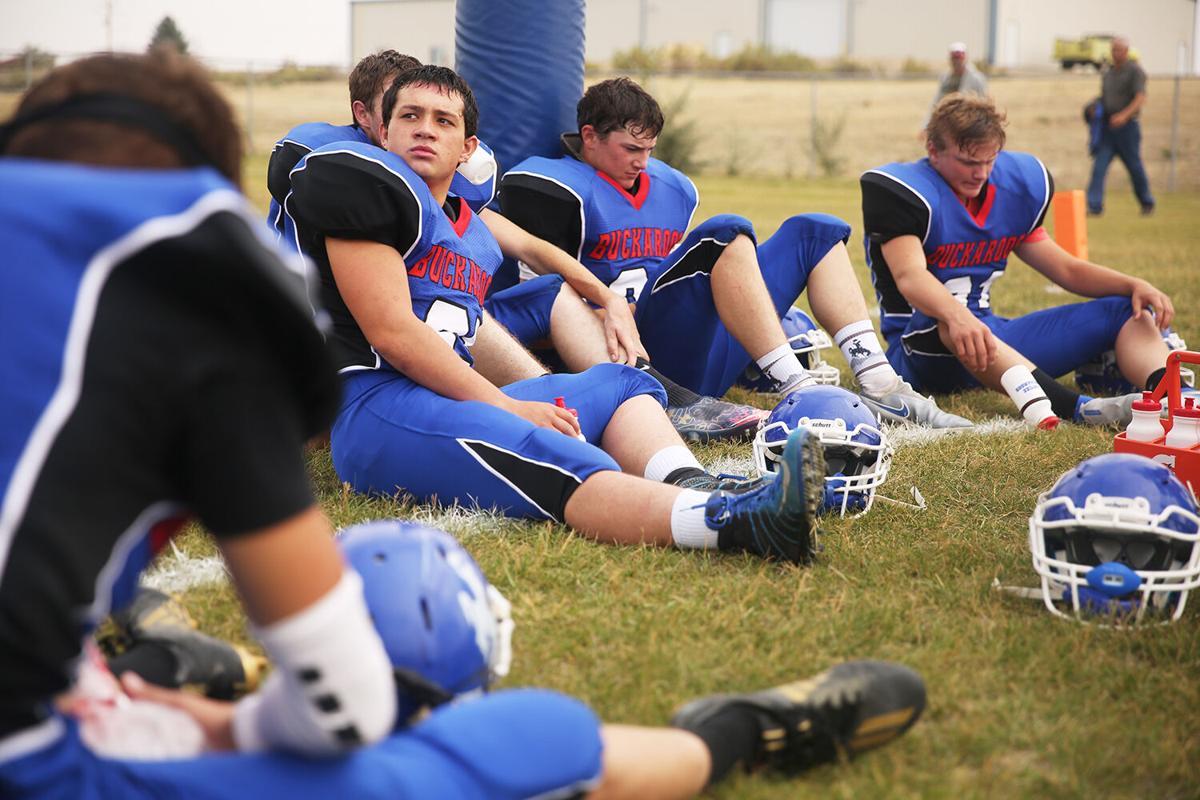 Kaycee High School’s football team sat in the North end zone for half time on Saturday morning. Kaycee was leading Sheridan going into the half and remained on top through the end of the game. 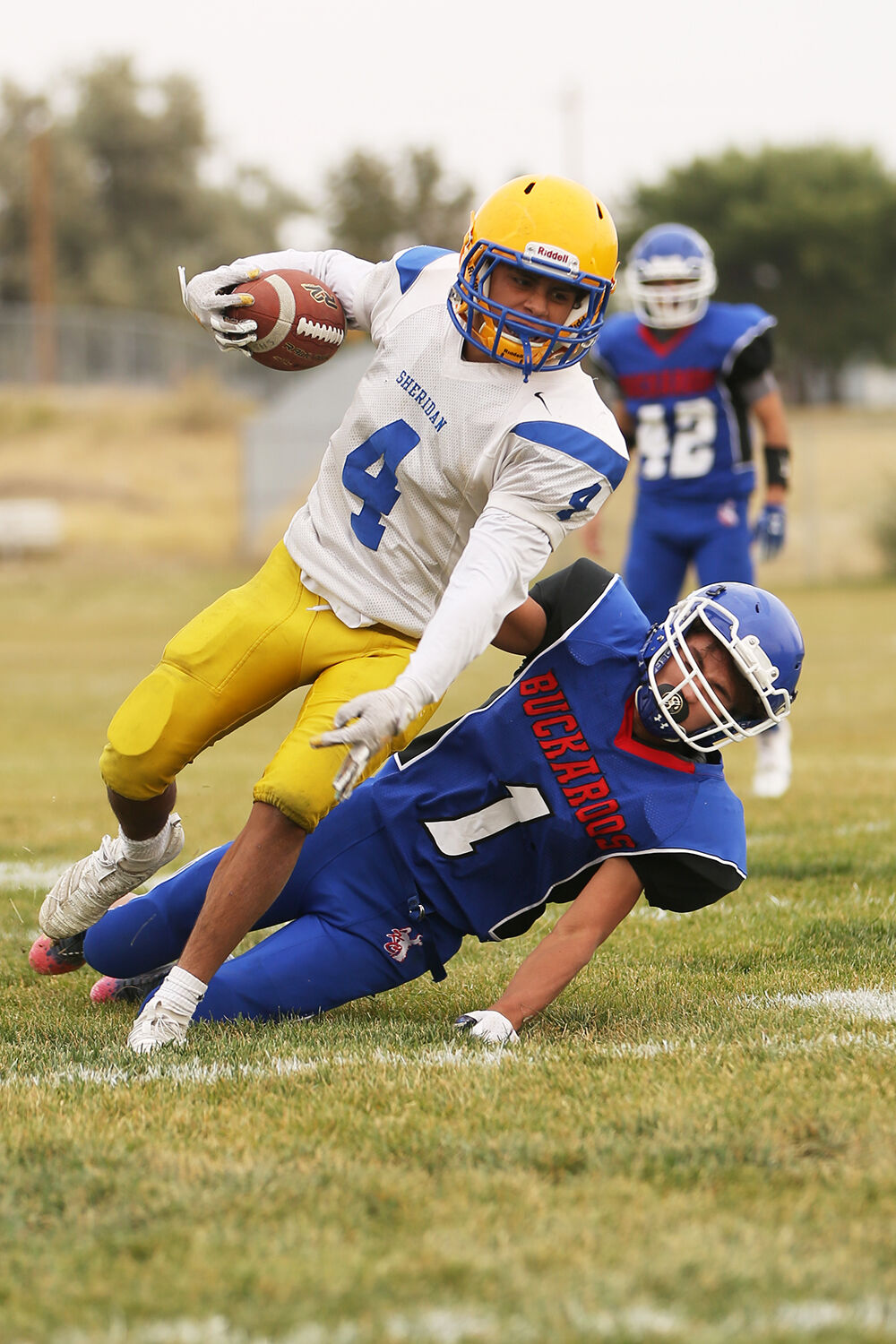 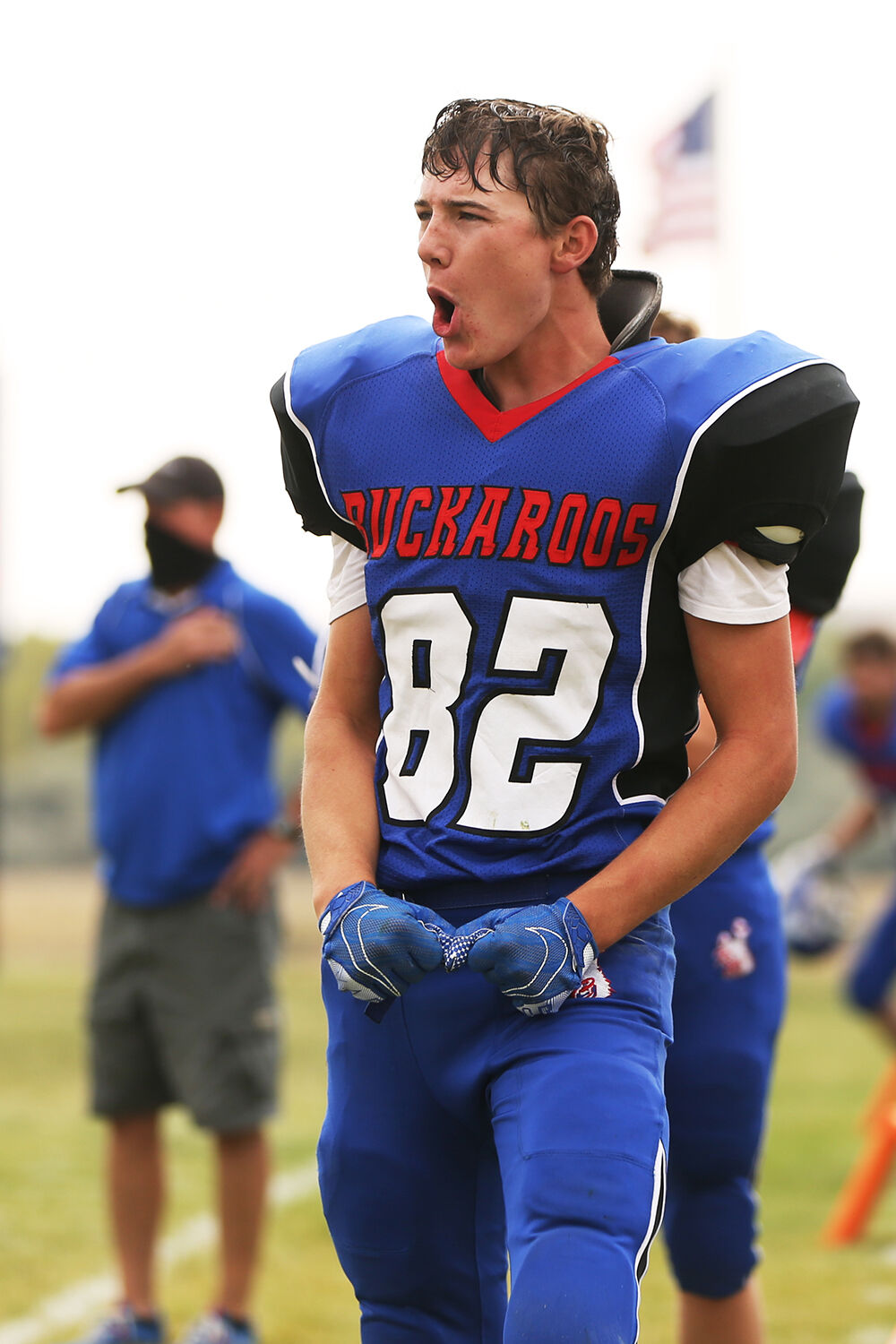 Kaycee High School senior Rhys Stafford screams in celebration as freshman Damien Cohee catches and scores a touchdown in the final quarter of the game on Saturday morning. The younger players were all put in at the tail end of the game to get some play time. 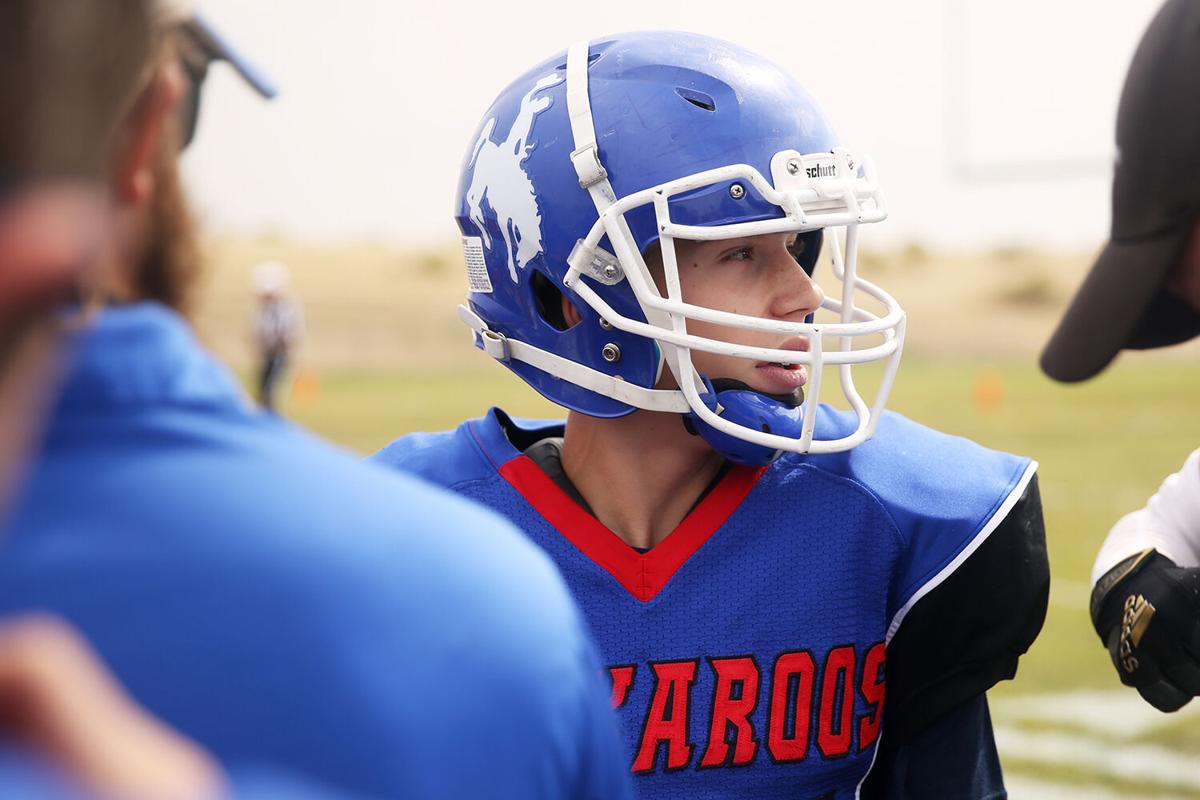 Kaycee High School freshman Damien Cohee looks to his teammate during a huddle in the final quarter of the game on Saturday morning. Cohee scored a touchdown shortly before this huddle. 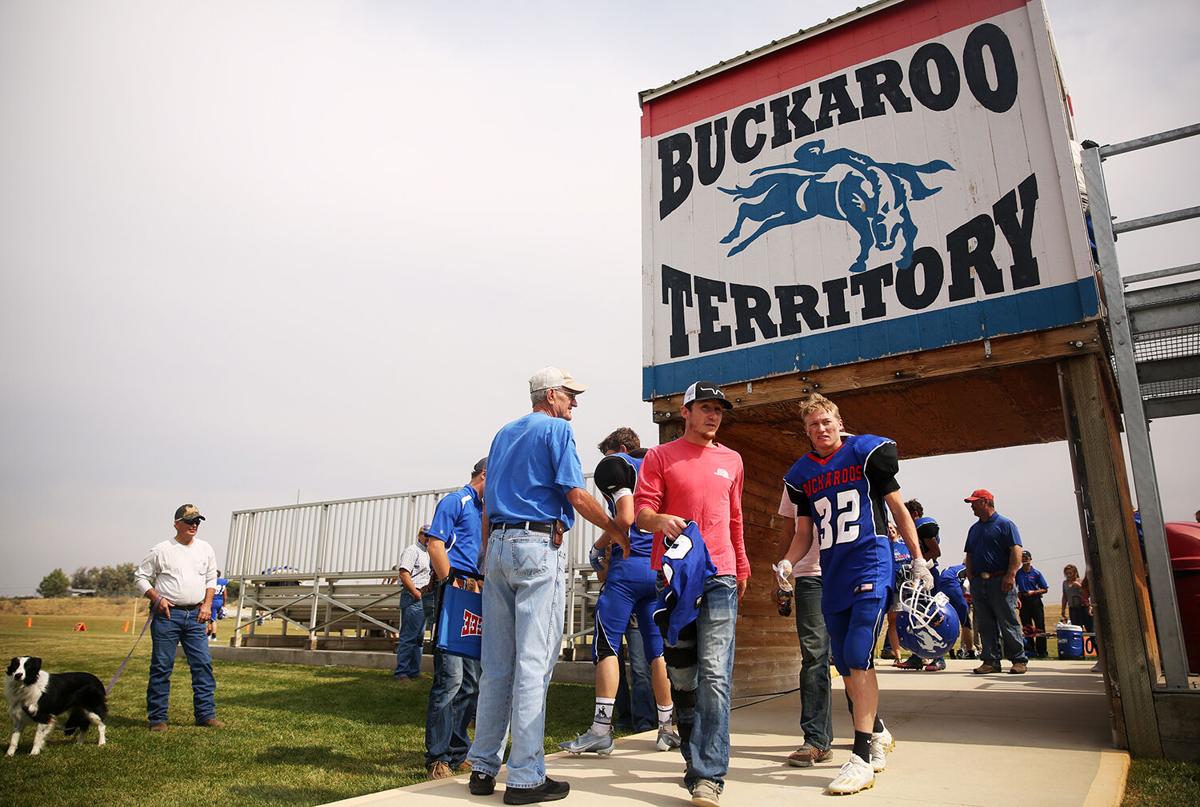 Kaycee High School senior Ethan Devlin, right, walks back toward the locker rooms with teammate Josh Cleveland after the end of the game on Saturday morning. Kaycee’s players all passed under the Buckaroo Territory stand on their way back inside and were congratulated and greeted by attending fans lining the walk. 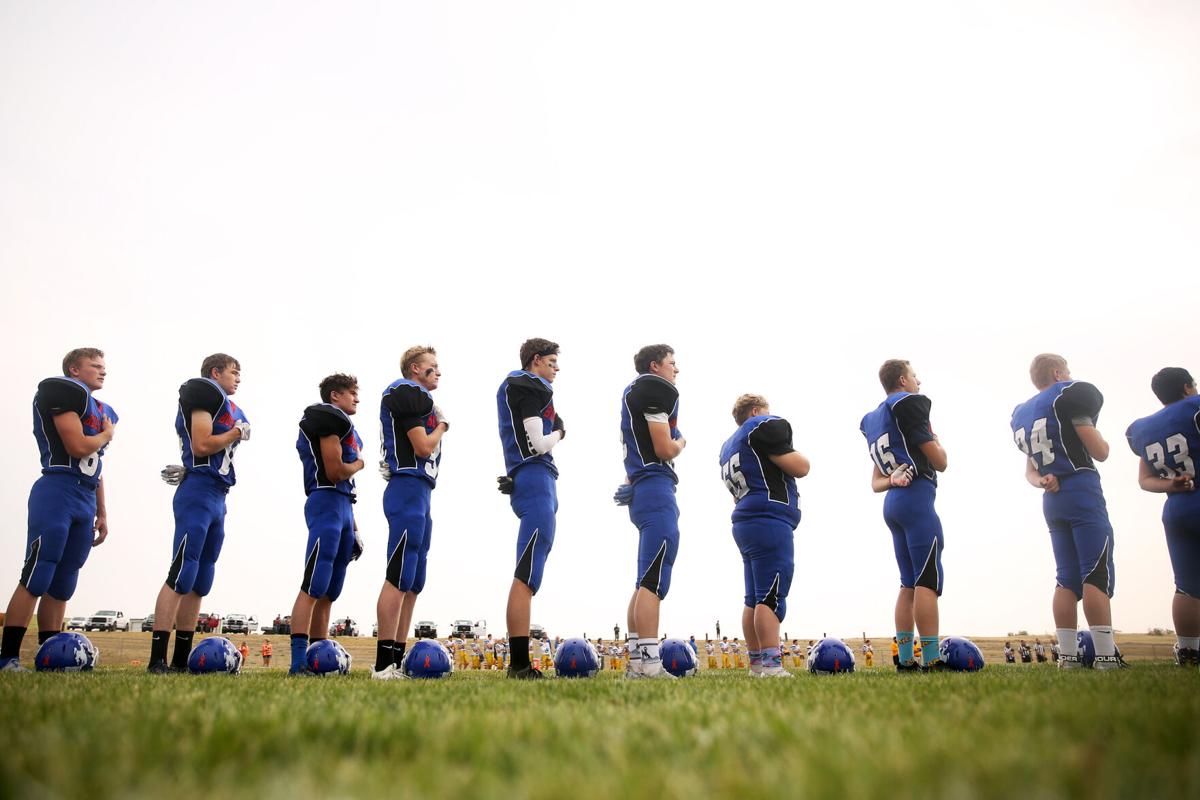 Kaycee High School lines up on the sideline for the singing of the national anthem on Saturday morning. Both teams chose to be announced as a team rather than individually.

There were 11 seconds left in the first half. Kaycee High School had watched its early lead against the Sheridan High School  freshman squad narrow by an unstoppable offensive barrage, and the Buckaroos were running out of time to build it back up.

Kaycee’s first pass was smacked out of the air by a Sheridan defender, and the clock ticked down to just seven seconds.

But the second attempt made it to the hands of senior Dylan Fauber in the end zone, and Kaycee surged back into a comfortable 20-point lead just as the buzzer sounded for the second half. That offensive tenacity carried the Buckaroos to a 78-52 win even with a halftime loss of junior Harley Davis.

“For the first time in history, we have more people at a 1A game than there is at the NFL,” joked Kaycee’s announcer over the loudspeaker.

As the two teams lined up for the national anthem, the difference between the squads couldn’t have been more stark: Kaycee’s 12 men took up just a portion of the field, whereas Sheridan High School’s massive 30-player team spanned nearly the entire sideline.

“It definitely affects the freshness of players,” Largent said. “I think it reflected really good on our team and our boys and our conditioning that they could hang with those boys and continue to give them a game.”

The visitors’ near-endless pool of substitutes couldn’t lift them past the smothering Kaycee blockers that allowed the Buckaroos’ offense time to plan and execute passes.

Sheridan scored a touchdown on the first play, but the tally was recalled on a penalty and the tide shifted the home team’s way. Aggressive blocking allowed Kaycee’s quarterbacks to line up passes that spurred the Buckaroos out to a 26-point lead, while the defense— junior Sam Ramsbottom and senior Rhys Stafford combined for eight unassisted tackles— held the visitors to just 14 points.

Sheridan slipped a few rushes past the Kaycee defense to creep within sight of a tie score with two consecutive touchdowns. It was then that the last-minute touchdown put the Buckaroos back in a comfortable lead going into the second half, 46-26.

Davis, who had been instrumental in many of the Buckaroos’ first-half tallies, was sidelined at the half with a wrist injury. Meanwhile, the home team’s stalwart defense relaxed slightly as the game clock ticked down. Sheridan scored a series of touchdowns, including a last-minute rushing tally.

“There was definitely some fatigue coming into play there down the stretch,” Largent said. “The other team’s not wearing down at the same pace. They’re running six fresh guys in every play.”

Still, Kaycee’s relentless offense — senior Ethan Devlin ran for 110 yards, and overall the Buckaroos rushed for 330 and passed for another 217 — kept the home team in a comfortable lead. The 26-point final margin marked the closest game of the Buckaroos’ season.

“I think we had 650 total offensive yards,” Largent said. “The boys were up and down the field a few times. Our offense was doing a great job in almost all aspects. … Defensively, I think Sheridan threw some things at us that we hadn’t seen in a while that are going to help us make some adjustments.”

Next weekend, a 3-0 Kaycee squad takes on its second conference opponent at home versus Hulett, a 0-1 team still looking for its first victory.

“All in all, I think it was a really good game for us,” Largent said. “They showed us a lot of different scenarios, and it was probably the toughest game we had this season. … I honestly think Sheridan showed us enough and played us tough enough that if we were prepared like we were going to play them again, I think we’ll be able to cover Hulett or really any opponent.”