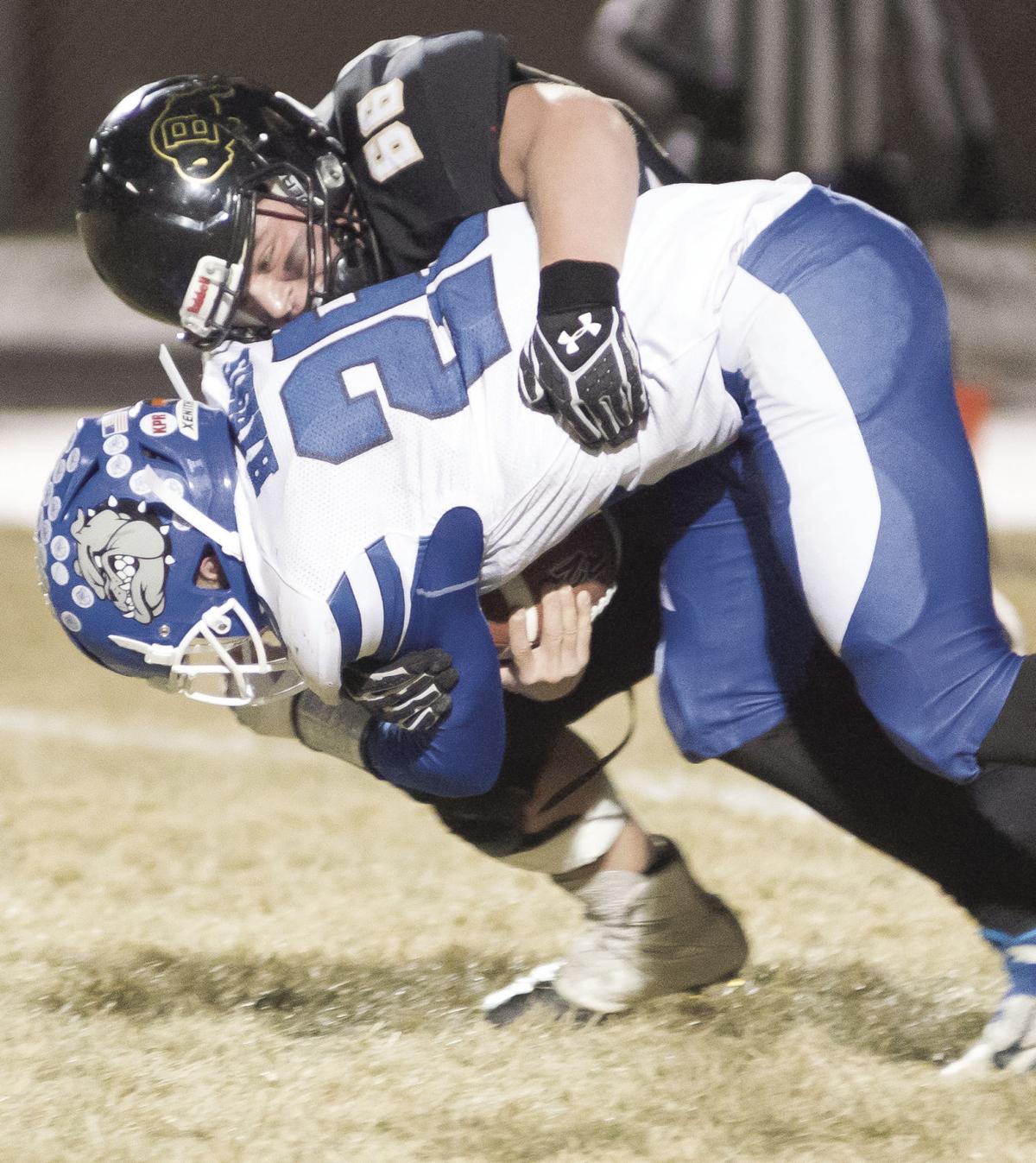 Buffalo High School Bison defensive lineman Austyn Carder drags down a Lovell runner Friday night at BHS during the Bison’s 28-6 victory over the Bulldogs. The win was the 19th consecutive for the Bison. They will host Thermopolis Friday night at Mike Moon Field for a chance to get to the 2A championship game. 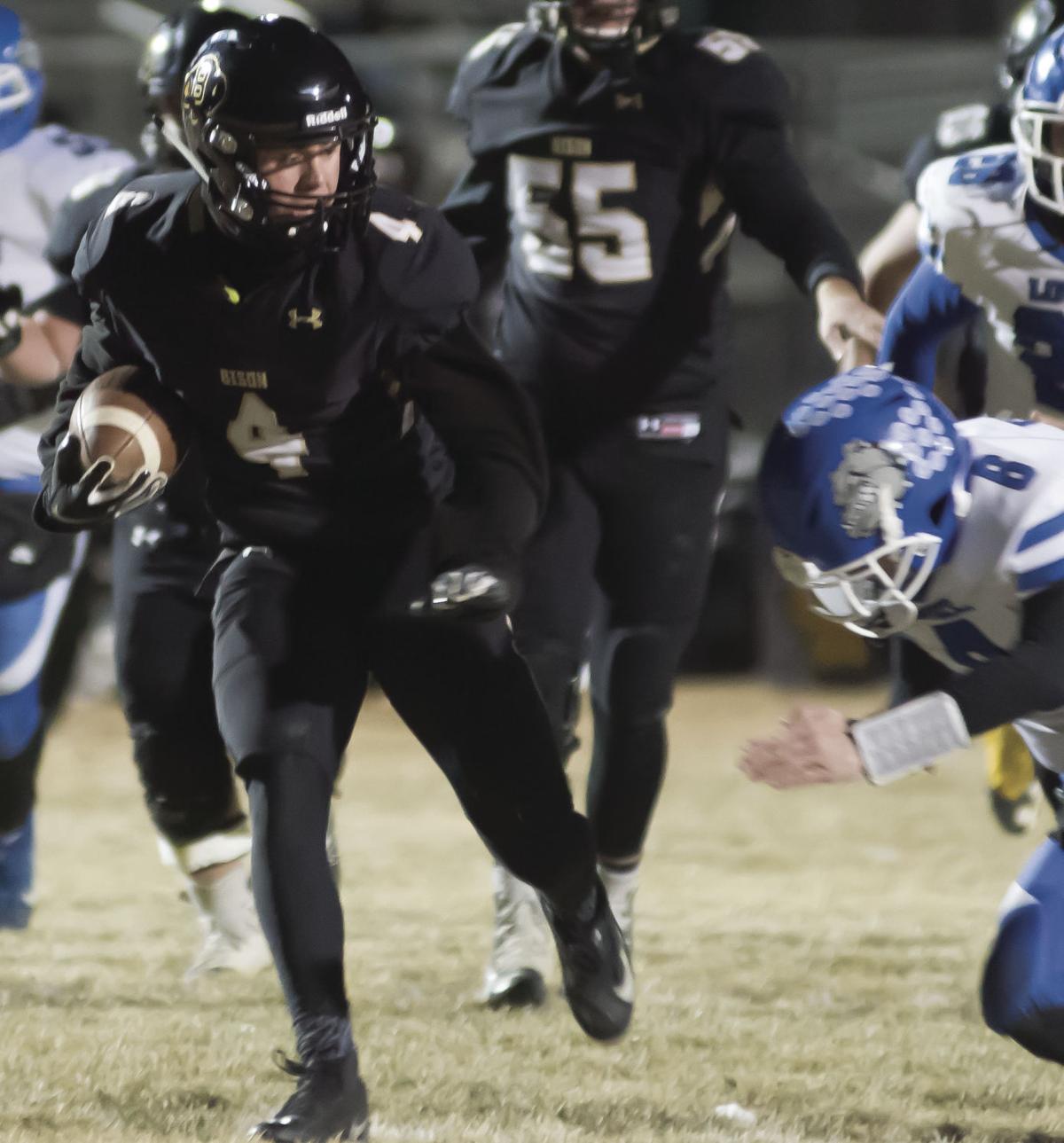 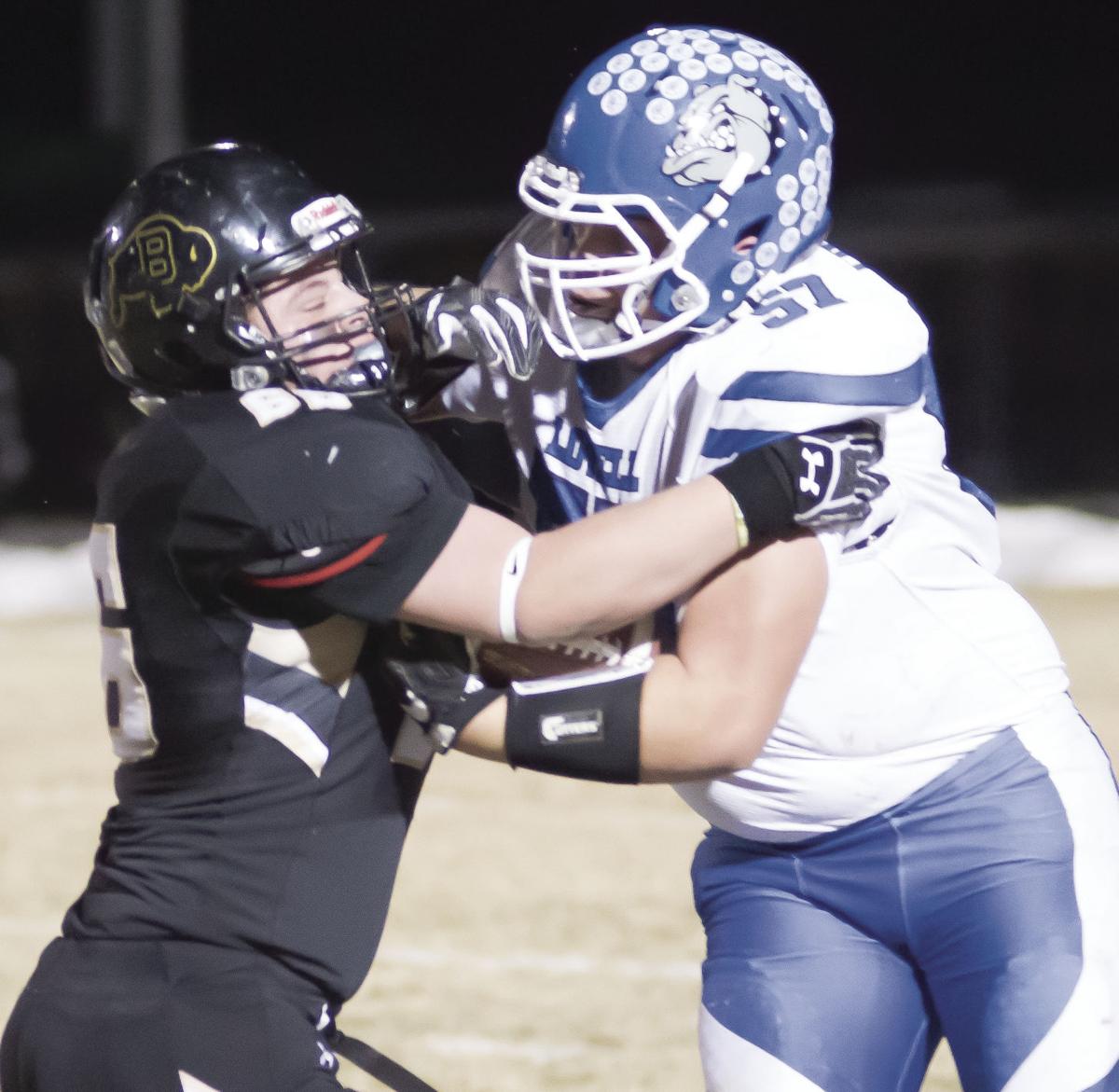 It may have taken a little longer than expected for the Buffalo High School football team to figure out the creative offense and the stout defense of the visiting Lovell Bulldogs Friday night, but, once they did, the offensive line opened up enough gaps for nearly 300 yards on the ground among three Buffalo backs, and the defense forced three turnovers and countless tackles for loss in a 28-6 playoff victory.

It is the 19th consecutive win for the Bison and puts them one game away from another shot at a 2A state championship.

“Lovell has just gotten better with every game this year,” coach Rob Hammond said. “They have a whole new coaching staff and were figuring out different schemes. They were big and physical. That was the best defense we have seen all year.”

Rowen Ruby rushed 28 times for 215 yards and two touchdowns, Mason Moon found Jace Skovgard in the end zone for a score and Anthony Graves helped seal the win with a long fumble recovery for a touchdown.

“It was fun to actually stay in the game for a full four quarters and not have to go out at halftime,” Graves said. “We actually had to work for a win and not go up three touchdowns in the first quarter.”

For once Buffalo didn’t have one touchdown in the opening quarter and it took an interception from defensive back Rowen Ruby to keep the Bulldogs from putting up a score on their opening drive.

Once the Bison offense got things going, the home team put together a mechanical drive early in the second quarter. Ruby capped off the drive with an 11-yard touchdown run to put the Bison up 7-0. It was the lone score of the first half.

The Bison defense held the Bulldogs to 83 yards rushing in the opening two quarters, over half of those yards coming on the first run of the game.

“We finally got settled in on defense,” Graves said. “That first series we were a little jittery. As things went on, we kind of got it figured out.”

In return, the Bulldogs defense couldn’t figure out the Bison offense to start the third quarter.

A big kickoff return by Dallas Lopez got the Bison in good position. Ruby then took over with chunks of hard-earned yards on the ground. He eventually found the end zone on a 19-yard touchdown run on fourth down to increase the lead to 14-0.

“They won the toss and chose to receive and that made us mad,” Ruby said. “To get the ball and come out in the second half and put together a scoring drive was huge for our team.”

The ensuing Taylor Swanston kickoff was mishandled by Lovell and the Bison special teams recovered yet another kickoff to get the ball right back.

The Bulldogs took over after a Bison field goal attempt resulted in a broken play. A shovel pass from Lovell caught the defense off guard for a big gain. Hunter Pope then caught the Bulldog quarterback for a huge sack that led to a turnover on downs.

The Bulldogs busted out the secret weapon in the fourth quarter. Coy Trainor at 260 pounds improved the Lovell ground game for a spell. Austyn Carder had snuffed out a pass to Trainor in the flat earlier in the game for a 2-yard loss. He also had a first quarter run for negative yardage. The second Trainor rush was a 28-yard run that surprised everybody.

“We were not expecting that at all,” Hammond said. “We knew they were going to be creative and that took us by surprise.”

Trainor eventually found the end zone to bring the Bulldogs to within eight at 14-6.

“When that guy got a full head of steam he was tough to bring down,” Graves said. “The coaches told us to hit him low and that’s what we started to do and we really slowed him down.”

After recovering the onside kick attempt the Bison marched into the red zone behind big runs from Dawson Hatch. Moon eventually found Skovgard for a 7-yard touchdown strike to stretch the lead to 21-6.

Graves secured the win moments later with a fumble recovery for a score, picking up a backwards pass and streaking down the sidelines for his first varsity touchdown and making a case for a spot on the Bison 4X100 relay team.

“It was a screen pass. The guy on the line was kind of pushing me and the quarterback threw it and I jumped up and hit it,” Graves said. “It must have been a backwards pass and I got a lucky bounce because it bounced right back to me. I wasn’t going to let anybody catch me.”

It was one of many big Bison defensive plays. Hyrum Hatch lit up the Bulldogs and led the defense with 19.5 points. Dallas Lopez and Graves finished with 15 defensive points. Nathan Swanston had 11 on defense; Dawson Hatch 10; Calvin Rule, 8; Jacob Corden, 8 and Ruby, 8.

The Bison will now host Thermopolis Friday night at Mike Moon Field at 6 p.m. Buffalo handled a big Bobcats team well earlier in the season in a 28-14 win. Thermopolis is coming off a 49-14 victory over No. 5 Lyman.

A win over the Bobcats will likely set up a rematch with Mountain View in the 2A championship game. The Buffaloes crushed Wheatland 72-0 on Friday. They face Burns this week.